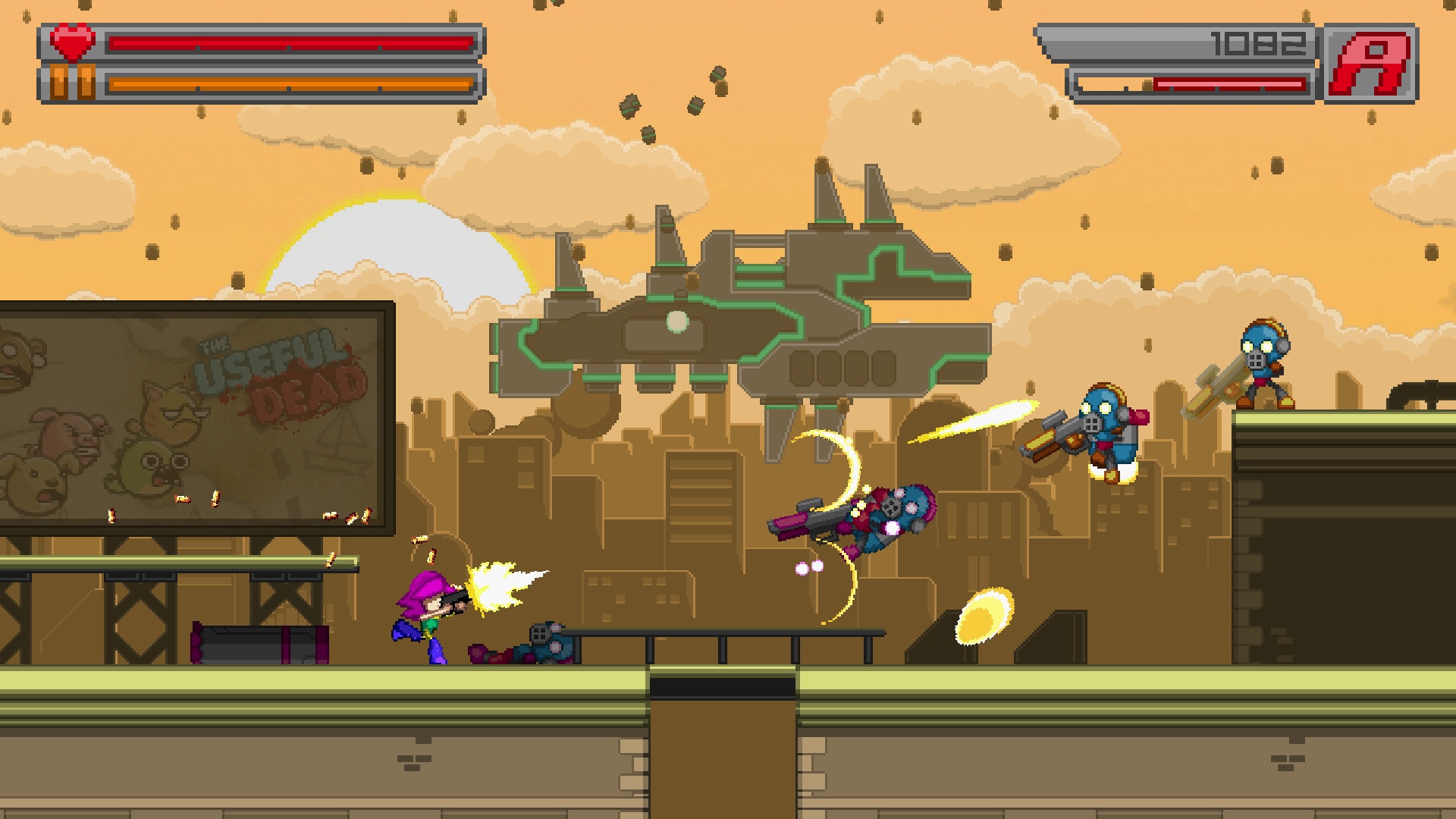 If it ain’t broke, don’t fix it. I reviewed Bleed in September last year, and I had a damn good time. Had such a damn good time that I scored it a nine out of ten. Sure, Bleed had been out for about five years prior to my review but I missed it the first time around, and the re-release thoroughly impressed me with its Metal-Slug-meets-Max-Payne-action-packed-bullet-hell goodness. So imagine my excitement when not even six months later I’m given the opportunity to review the sequel to such a great game. Surely there’s no way they can mess this one up, right?

I’m relieved to say Bleed 2 does not disappoint.  After defeating all of earths mightiest heroes last time round, Wryn proved without a doubt that she was the best in the business. Unfortunately, defeating all of the planet’s elite protectors has left the world-wide open to a fresh assault from an even more powerful foe. Armed with her trusty unlimited-ammo dual pistols and her even trusty-er katana, Wryn is back to fill the screen with a steady stream of bullets as you battle through epic set pieces and cleverly designed bosses in an attempt to thwart the threat you paved the way for.  There are a few tweaks and changes to the original, but for the most part, Bleed 2 is essentially just more of the good stuff that made the first game so great. 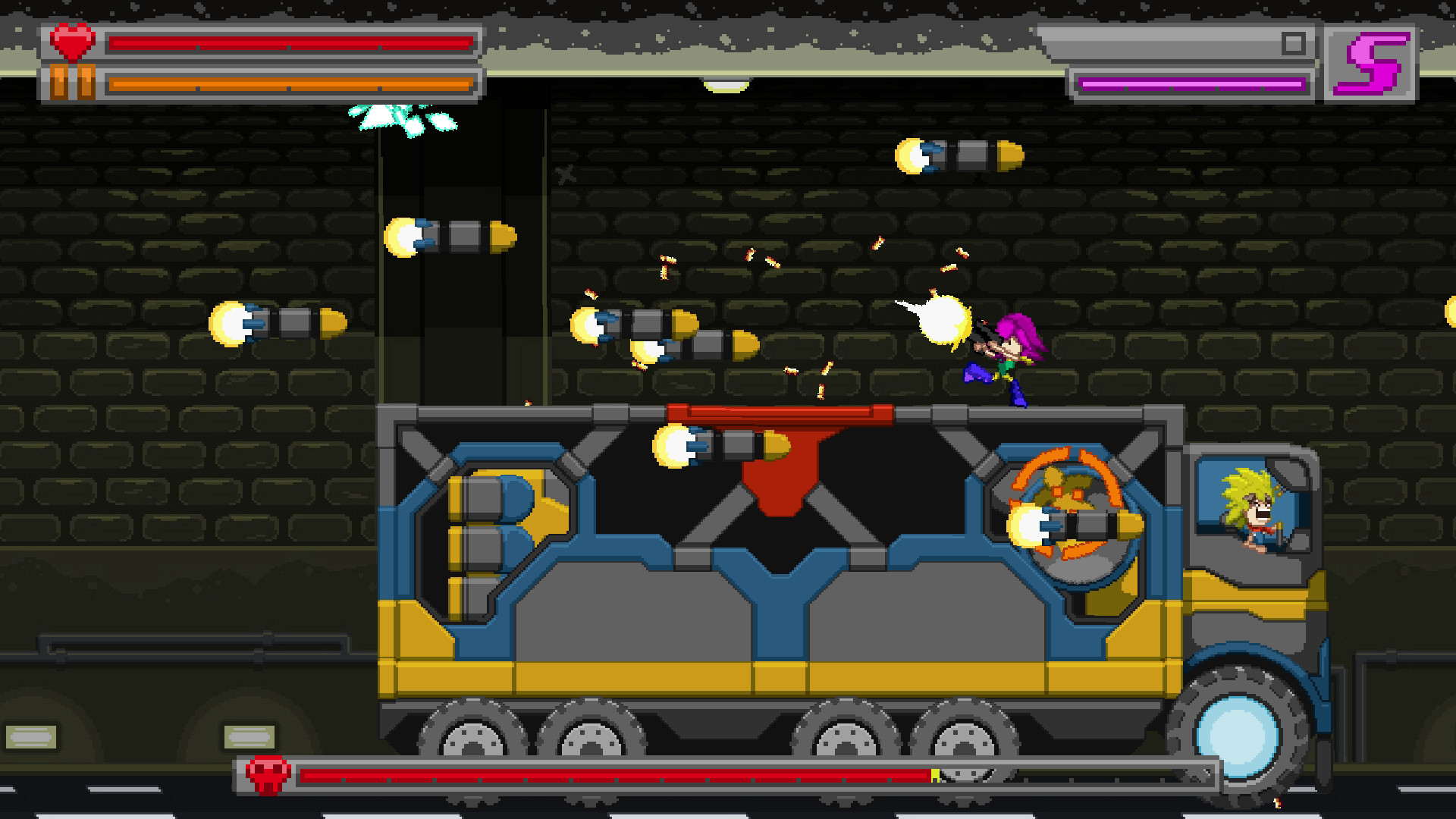 The most notable difference is the emphasis on reflecting projectiles back at the enemy. Pushing the right analogue stick still fires your guns in the desired direction, but this time around Wryn will also give a quick slash of her katana before she starts shooting, allowing her to reflect any of the pink projectiles coming her way. A pretty sweet addition in its own right, but when paired with her triple jumps (she can actually jump four times but whatever) or her ability to slow down time, it can keep you safe during the bullet-hell onslaughts the game throws at you whilst still maintaining the offensive needed to rack up a high score.

The boss fights are also back in droves. So much so that I’d say that the game is actually more boss fight than anything else, which isn’t a problem because they are all pretty unique and challenging affairs. Theres a ninja that reflects your own shots back at you, a giant missile platform in the sky, a massive drill-robot-thing, a gauntlet of the bosses from the original game; it’s all cool stuff that changes the pace of the game as you figure out how to best use your abilities to achieve victory. There is a notable absence of the weapon shop from the original, however.  Even though a few extra weapons are unlocked by completing the game, it does limit your options quite drastically, which is never great. Oh well.

Visually, it seems to be pretty much identical to the original, so expect SNES style retro graphics. Like the original, Wryn is also animated in a fluid manner, and threading the needle through a billion bullets in slow-mo as you return fire with your own shower of hot lead never really gets old. Enemies are designed in a simple but entertaining manner. I don’t think you’ve really lived until you’ve shot down a helicopter full of cats or a couple of robot worms. In the sound department expect the same style of nineties chip tune as the original, nothing epic, but nothing annoying either. 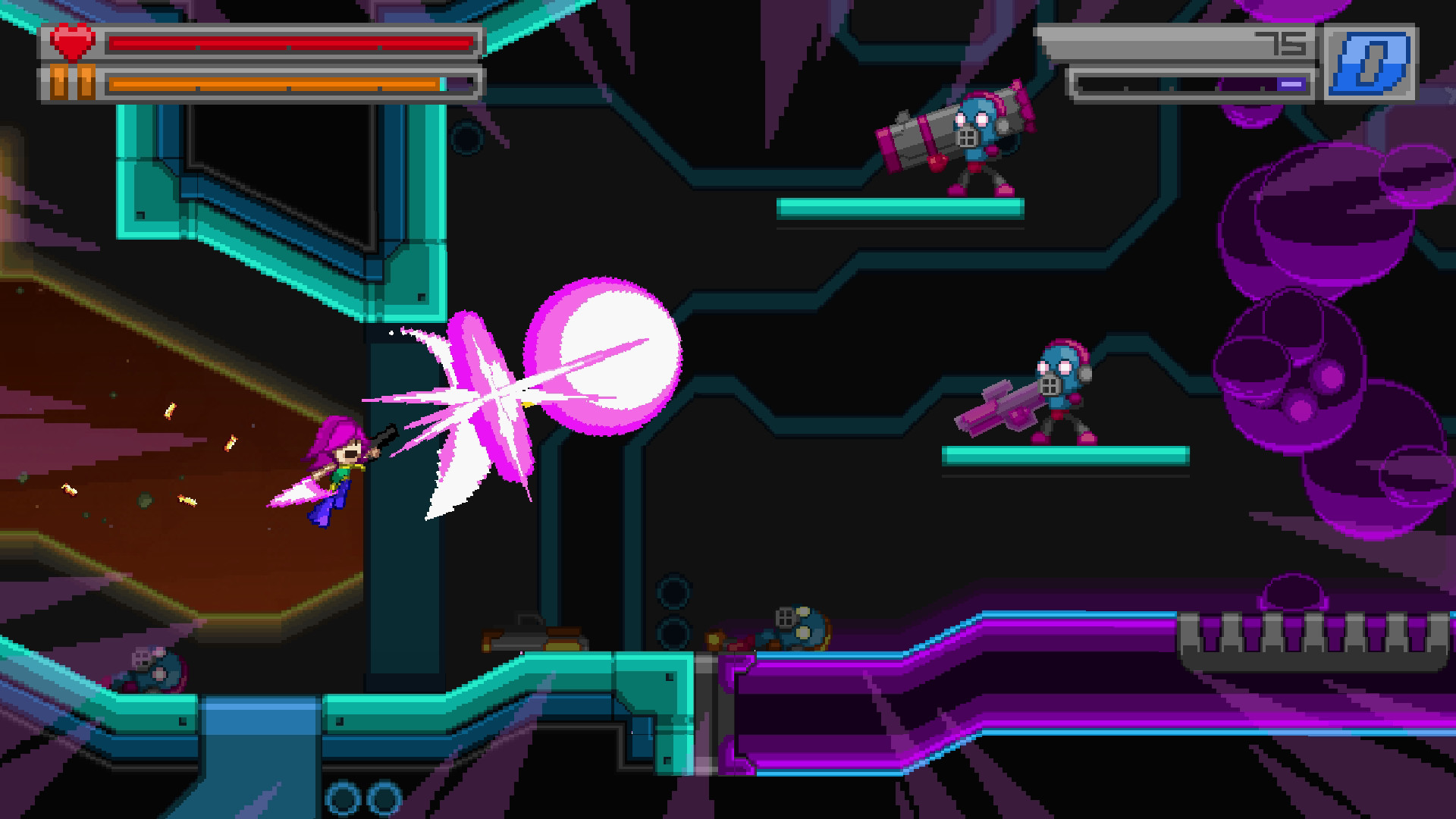 Bleed 2 is admittedly a pretty short game. I managed to beat the whole thing on both medium and hard in about an hour each. However, I was using the generous check-points and infinite lives to an almost unfair advantage, and while I managed to complete the game, I died pretty often and finished with a pretty poor score both times. It also offers local multiplayer. A nice bonus to playing with a buddy is the ability to reflect all the yellow projectiles that pink-haired Wryn has to try to evade. With a shared health pool, it pays to watch each others backs. There’s also arcade mode which is a one-life run at the whole game (good luck with that), endless mode which randomly generates a bunch of levels and enemies to battle through, as well as challenge mode, which allows you to select up to three bosses to battle at once. Extra weapons and characters are unlocked by completing the game, each armed with their own unique abilities and advantages. Like the first game, you can complete it and put it down if you want, but to do so would be a waste. The game opens up significantly after completion and adds a ton of replayabilty with all the available modifiers and options to mess with.

I can easily recommend this game to everyone, be it casual gamers or high-score-speed-runners. It’s a ton of fun, a game that rewards skill without being ball-crushingly unfair. If you enjoyed the first game you’re almost guaranteed to enjoy this one, and if you are new to the series you are in for a treat. Give it a go, it’s well worth the price.