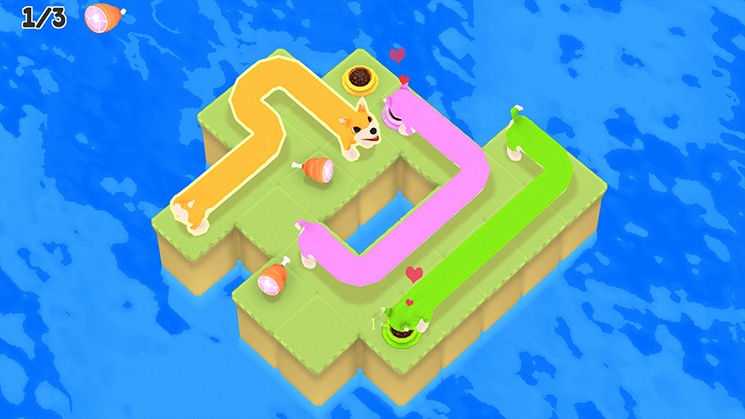 People tend to be very, very wary of games that appear to capitalize on memes, and for incredibly good reasons. Besides being wholly unoriginal in concept, they often are god awful in terms of execution. When you see unironically titled games like “Fidget Spinners vs. Zombies,” you tend to think that people are honestly cashing in on kids who have no awareness and don’t mind barrages of ads. Even Nintendo isn’t impervious to such things, with the infamous Meme Run marking the lowest point of the WiiU and, thankfully, being pulled just a few months later. But there are some instances with people taking cute identities and making something worthwhile. And, in the case of Puzzle Puppers, that comes across marvelously.

Puzzle Puppers is a weird little puzzle game where you have multiple stages that consist of small islands, some meat, a food dish and a Shiba dog (hereafter referred to as a pupper, because he isn’t big enough to be a doggo). Your objective is to stretch the pupper all the way to his food dish so that he can have some dinner, and that’s the entire mission statement. Along the way, you get a higher score (1-3 hearts) if you can also gather most/all of the meat that’s strewn about. There is no time limit, no numerical score, no pressure: just get the pupper to the food dish and pick up the meat along the way. 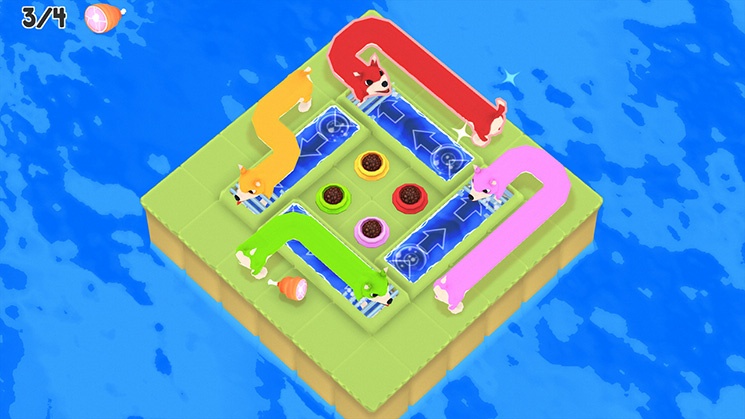 The first few levels are laughably, almost insultingly easy, and that’s a good thing: it lets you get a feel for the mechanics and ideas of what Puzzle Puppers is trying to accomplish. This can be played with either the physical buttons or the touchscreen, and, strangely, I recommend the buttons. This is because the puppers move in angular fashions, not curved lines, and it felt much more natural to direct them with the C buttons instead of dragging my finger. It also made moving back a space easier, because you could simply hit the B button to undo instead of trying to backtrack with your hand. There were a few times, with the touch controls, that I ended up creating a whole new kink in my pupper and having to rethink my own path to even back it up. Ok, it took like two extra seconds, but that’s still time wasted that didn’t need to be.

After you get a general hang of things, the game starts to slowly introduce more puppers per level, and this is where a bit of strategy takes hold. It doesn’t matter which pupper eats the meat, so long as a.) all the meat is eaten and b.) the puppers get to their respective food dishes (orange bowl for the orange dog sort of thing). Suddenly I was actually plotting out and foreseeing my moves, swapping between puppers with the shoulder buttons, and moving a couple of spaces at a time before rotating, sometimes nuking everything and starting over again. I really, really wanted to get those dogs to where they needed to be, and it ended up eating about an hour of my time before I even realized how much I had invested in these puppers. 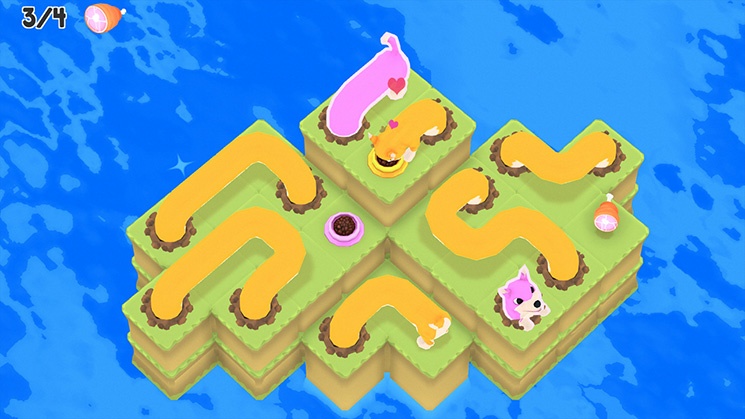 Puzzle Puppers understands that it’s not vying for Best New RPG or some other crazy title, so it invests its resources into what it does well. Firstly, the choice of dog. The Shiba dog has become synonymous with the internet and adorable situations, so this was an ideal choice of mascot (not to mention it translates into a video game sprite quite nicely). Secondly, the atmosphere of the entire game. You have a very sweet, relaxed soundtrack that’s more string and elegance than anything else, which makes this feel like a parlor experience that plays while everyone chats about what the North could possibly be up to these days. The colors are vibrant but not chaotic, so it’s visually engaging and draws your attention. The stretching of the dogs is certainly silly, but not absurd or weird, so it’s also quite safe for any passerby. In fact, there’s so much consideration into what Puzzle Puppers is, rather than what it could be, that I was actually shocked this title was available on other platforms, because it feels right at home as a silly little Nintendo title.

It’s hard not to recommend Puzzle Puppers, although I’m sure there are plenty who will pass it by out of anger towards simple titles on their beloved Zelda machines. It’s cute, it’s fun, there’s tons of levels and it’s not as simple that you’ll blow through it in minutes. If you’re interested in a different approach to puzzling and don’t mind some overly adorable companions, it’s time to see what some great puppers are up to on the Nintendo Switch.