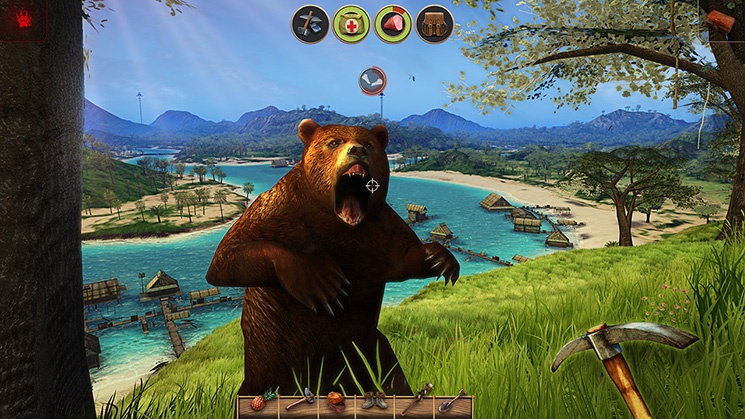 It is alleged, that around the date of October 28th, 1943, the U.S. Navy conducted an experiment that rendered the USS Eldridge, a destroyer escort ship, invisible. It was claimed by its crew that this experiment saw the vessel being transported to another dimension which resulted in the death of several sailors; some of whom had become fused into the ship’s hull. These turn of events were to become known as the Philadelphia Experiment. In Radiation Island, developed and published by Atypical Games, you play the role of one of the ill-fated crewmen of the Eldridge. After taking part in the aforementioned experiment, you find yourself stranded in another dimension upon the shores of a seemingly long-deserted island.

With an original release on the steam, android and iOS platforms, Radiation Island is now being teleported to the Nintendo Switch. Primarily a first-person, action-survival adventure, it’s your job to explore the island and uncover its dark secrets in an attempt to find a way back home. There are three main elements within the gameplay you need to achieve in order to discover the truths of your mysterious location; survival, exploration and crafting. When you start your adventure, the game takes you through a tutorial of the basic skills you will need to learn. From here you are then given a choice of three options on how you would like to play the game. Firstly, you have exploration where the indigenous wildlife will not attack you and you are free to explore the island as you wish. Second is survival, which is basically an increased difficulty mode and lastly, adventure which is the intended play mode to give you the best overall experience.

From the outset, you are free to explore any part of the island with its free-roam mechanics. However, with a need for survival, you will soon have to begin scouring for food to keep hunger at bay, which can have a detrimental effect on your health. Luckily, you can find many fallen fruits upon the ground in which to aid you. As well as this, you can also hunt the wildlife that populates the island. By crafting tools and equipment, you can set up traps or make a fishing rod and as you become more proficient, put together slingshots and bows. As well as the need for food, a complete day and night cycle is incorporated into the game. This means that you also have to be aware of the elements, like sheltering from the cold; particularly upon some of the high grounds which towers over the island. The crafting element of the game has a very ‘minecrafty’ feel about it and, thanks to a survival guide that you possess, the instructions for creating such items are already set out for you; all you need to do is find the ingredients. With your basic tools you can cut down trees and mine for more suitable components with which to build better and stronger equipment such as shelters, torches and harder wearing weaponry. 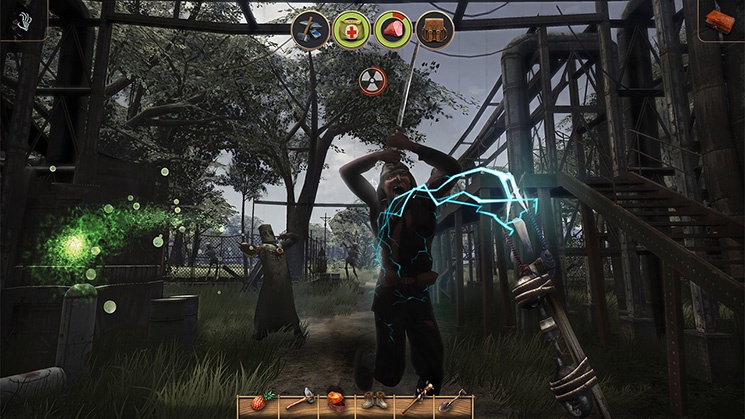 You soon learn that all these items are vitally important if you want to survive. It won’t be long before the less friendly species of the island’s wildlife catch on to your scent and come hunting for you. From wolves, bears and crocodiles, to name but a few, there are many dangers that will await you as you begin to explore. Everything here works hand-in hand. In order to survive, you need to craft, in order to craft you need to explore. It’s vital that you spend your first few hours in the game learning the general premise of crafting, and exploring your immediate area, in order to be equipped well enough to further explore the vast network of islands that awaits you, as it soon becomes apparent that there is a lot more to this place than meets the eye.

You won’t be able to help but notice, a large network of towers that are spread across the whole region. These areas hold the key to finding a way home, however, these compounds are also guarded by hordes of zombies that will simply hunger for your blood. Although extremely dangerous, exploring these areas can reward you with more important elements for crafting, as well as providing you with various guns and ammunition in order to stand a better chance of survival. These areas change the game substantially from your basic beginnings, with a sudden urgency and tension as you battle the undead to find the answers that you seek.

The game very much reminded me of a cross between Far Cry and Dead Island; albeit a hybrid that is a lot less polished. Its mobile origins are very evident with its graphical presentation and feel, however, it still remains a very solid experience. The landscapes and far-stretching horizons are impressive, as are the weather and day/night cycles. There are plenty of smaller details that are quite pleasing to the eye; leaves falling off trees and grass that shimmers in the wind. However, in some particularly dense locations, there was a large degree of textural pop ups but they didn’t really detract from the gameplay too much. The area in which you can explore is vast and the game offers literally hours and hours of play time. When you combine all these elements together, this game is simply massive. 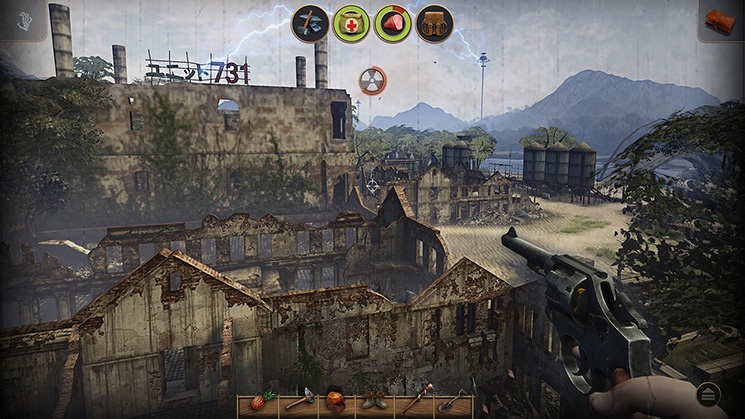 If there are any gripes to be had, then some of the mechanics don’t perform so well; wildlife becoming stuck in the scenery or not acting very realistically, although the zombies do fare much better in this respect and are quite literally, terrifying. The melee components can feel quite weak at times too. If you’re not a fan of the Elder Scrolls style of hand-to-hand combat, then you’re going to feel very hard done by here. The crafting isn’t quite as detailed as say, Minecraft, but it is adequate for the game, especially when you take into consideration that you are able to create boats and even a hand-glider, which is truly spectacular as you fly over the landscape.

Despite these minor setbacks, Radiation Island is a lot of fun to play. Learning the mechanics for survival and crafting is a joy in itself, as is exploring the island, which can be very rewarding. Battling the undead hordes of zombies in a pursuit of more lucrative loot, as well as solving the mysteries that they guard, is particularly exciting. When you put into consideration the mobile origins of this title, it’s really a very impressive title and one that sits very firmly, and quite comfortably, upon the Nintendo Switch; especially with its pleasing aesthetics and its options of touchscreen and conventional controls. It may not be perfect or contain the spit and polish of a triple A title, but for a mobile port it comes pretty close to it. For me, this is a game that I will long be experimenting with and is most certainly a title that won’t be disappearing from my games library any time soon.