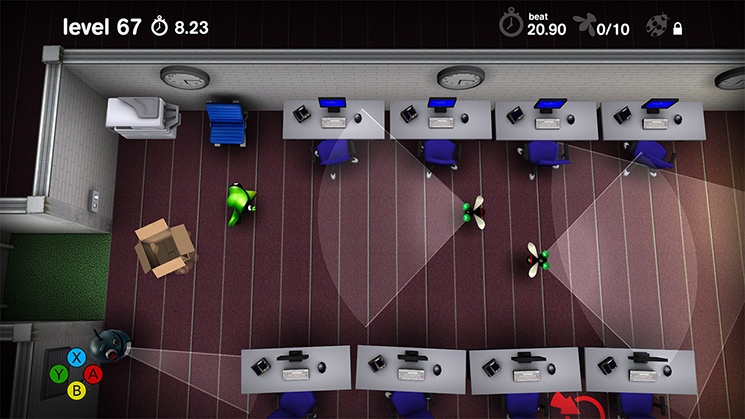 It’s not easy being a spy! Forever blending into the background so as not to draw any attention to yourself, infiltrating areas without being spotted and achieving objectives to the most top-secret of missions. This is something that becomes very apparent with Unfinished Pixels’ latest title to sneak onto the Nintendo Switch: Spy Chameleon.

As the colour-changing lizard, and a top agent of the RGB spy organisation, it is your job to complete varying missions, set over seventy-five levels, as you infiltrate different locations using your ability to blend into the differing styles of background cover and colour. From taking photos of a famous celebrity with her lover to stealing secret formulas, you’ll need to learn a pattern of enemy movement, camera locations and suitable cover positions in order to successfully complete your tasks.

This arcade-puzzler, viewed from a top-down perspective with a slight isometric angle to promote a sense of 3D visualling, sees you blending into different coloured rugs, spilled paint pots and illuminated floor panels, as well as other sources of camouflage, in order to avoid the varying sources of security that guard each of the locations you find yourself in. From patrolling robots, with cones of visional fields, timed recognition through the lens of cameras and sentry guards, your objective is to find a path from one side of a room to the other, where an exit will take you to your next location. Passing through room to room, your path eventually leads you to your prime objective and mission completion. With each mission, and each room, the complexity of security within increases, which means you’ll need to be on your toes in order to successfully breach each installation without triggering any alarms. 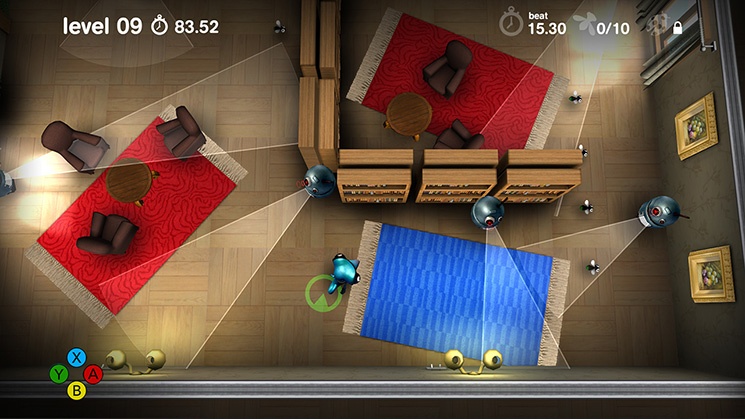 Using the left thumb-stick to guide the chameleon, each of the face buttons: X, Y, B and A act as a form of changing colours with a palette of red, green, blue and yellow. Whichever button you utilize, the scales of your skin will change to each corresponding colour allowing you to blend in amongst the background, thus nullifying any of the sensors that are constantly on watch for any intrusion. It’s a simple premise, but one that works particularly well as you figure out the mechanics of each of the puzzles that are presented to you within each of the rooms. With a 1080p display and running at 60fps, the graphics are bright and colourful and the controls particularly tight; which is needed in Spy Chameleon’s style of gameplay. It all adds up to very satisfying experience, both visually and contextually.

Although the basic premise of the game is essentially a puzzler, each of the levels also contain three further challenges that you can accomplish if you’re a one hundred percent completionist. Within each of the rooms, a line of houseflies offer you a suggested path in order to find the exit to the level. By devouring each of the flies on each level, you are rewarded with a small completion icon that signifies that the challenge has been completed. In a similar vein, you are also tasked with finding all of the ladybugs that are hidden within each room. Again, an icon signals its completion. The third challenge involves completing the level within the parameters of a set time in a speed run of its puzzles.

It isn’t imperative that each of the challenges for each level are completed in one run; in fact, it’s pretty impossible to do so and in reality, your first port of call should be to just reach the exit out of each room. This gives the game a replayability value, as you begin to revisit each level in order to complete everything that they have to offer. As well as these extra challenges, the game also contains a set of achievements which are awarded when you meet their certain criteria and in order to acquire each one of these awards, you will need to complete each of the challenges. There are also numerous difficulty levels that can also attribute to gaining some of the in-game achievements that this title offers. 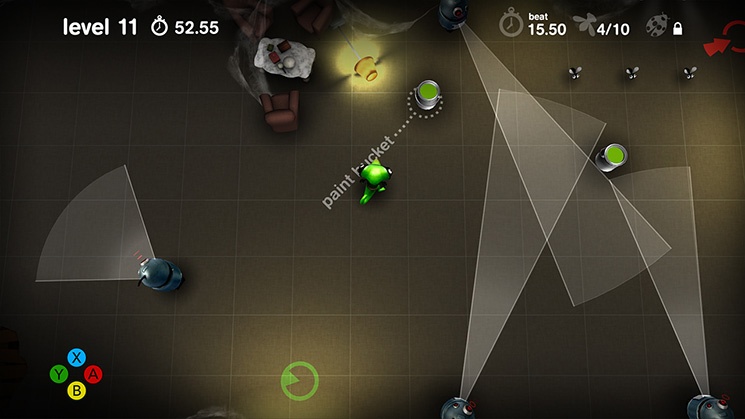 Taking part in the speed run elements of the game also opens up timed leaderboards that display your time and ranking against friends and global players. There is quite an addictive element to this inclusion as you try to complete each level within a time that gives you a good standing on these leaderboards and a claim to bragging rights. With each level lasting from just a few seconds to the more, complex puzzles taking a couple of minutes, this mode of play makes it ideal if you’re looking for five minutes to kill.

There is a lot of fun to be had with this game. Finding a way to solve each of the puzzles is a satisfying experience, especially as you progress further into the game and the complexity of each room requires some skilful dodging, blending and sneaking in order to reach its exit. Along with the addicting challenges of its extra inclusions, although mainly cosmetic but also providing very slight variations in how you play, there is a lot of gameplay value within the title and enough content to keep you playing for a good few solid hours. From its pleasing aesthetics and funky soundtrack, it’s easy to see that a lot of effort has been put into this game, as its production values all add up to a very neat title indeed.

Ideal for young and old alike, there is a lot to like with this title. However, the game has seen previous versions released on the Wii U, Playstation and Xbox platforms and this switch version is a direct port of the same game. There is nothing new here, however, if you were, or are, a fan of the game, or love to play puzzle games that offer a genuine challenge, then it’s most definitely a title that I would recommend and I certainly hope that this doesn’t become a title that simply ends up blending into the background of the other indie titles that are abundantly available today.