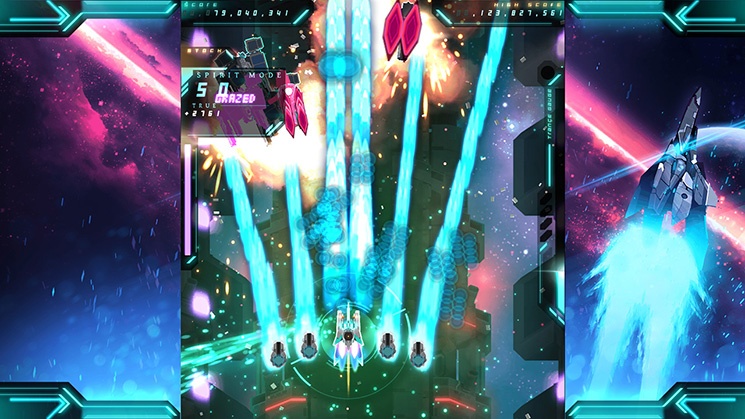 There’s a lot to be said for shmup games, and the Switch has been attracting them in droves ever since it launched just last year. Far from being a resting spot for gamers to look to easier and less complex shooters, a ton of arcade ports from SNK, plus a fair number of updated ports from Psikyo have made their way over, taking advantage of the inherent beauty of the Nintendo Switch. Not only is it Nintendo’s first console to really embrace digital publishing (Sorry WiiU, the numbers don’t lie), the very shape coaxes vertical shooters to come and present as they were naturally intended to be enjoyed. The result is a system that loves to be undocked and turned sideways so players can really sink their teeth into a full-featured experience of bullet mayhem. So, it really should come as no surprise as one of the modern masters, Doragon Entertainment, has brought Danmaku Unlimited 3 in this latest batch of Switch publications.

Danmaku is a Japanese word that literally means bullet curtain, or curtain of fire. The idea is that this game is one of those that relies less on accuracy and more on navigation: that is, your shots aren’t as important as those of your enemy. Actually putting the word Danmaku into the title of your game is a ballsy move, but Doragon isn’t ashamed or fearful of delivering. Danmaku Unlimited 3 contains two completely different but equally important modes with three different difficulty settings, and plenty of extra challenges once you manage to get through the main storyline (which is abstract at best). For longtime fans of vertical shooters, it shouldn’t take long: even with a few continues, you can usually get through the main game in well under an hour. The beauty of it all comes in the replay and the representation.

Shooting, again, takes a back seat to dodging in this game, but that doesn’t mean there isn’t inherent strategy within the controls. Your primary attack is an unlimited, wide-spread and chaotic shot that will most of the screen with bullets. Holding down the main fire button and mashing a secondary button activates a concentrated “lock on” sort of shot that does more damage but a.) only targets one enemy and b.) slows you down. This is actually a blessing for experienced players, who’ll want a more fine-tuned set of dodges in order to weave between the maelstrom of shots. Additionally, you do have a bomb attack that does double duty of destroying most enemies in range and, more importantly, negating all incoming bullets that might be about to ruin your life. This negation is incredibly important for both of the different game modes, though in different ways. 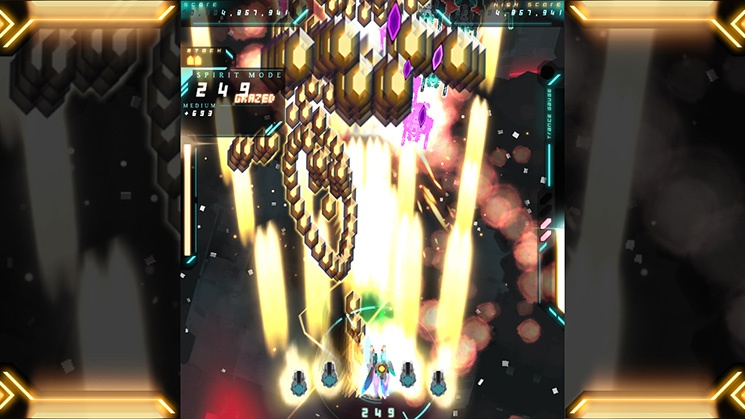 The two different modes of Danmaku Unlimited 3 are the Spirit and Graze mode. Spirit mode is set up to be the “easier” of the two versions, though that’s entirely subjective. In this mode, every time you blow up an enemy their bullets turn into spiritual power, which, in turn, slowly fills a blue gauge on your right side. Once this gauge is totally full, you explode into Trance Mode, which means your bullets are crazy powerful and you get gems from enemies (these just add to your score, don’t worry about it). Additionally, in Spirit Mode, your ship will automatically shoot off a bomb if you’re about to take a hit, which makes it the perfect armor for players who aren’t totally aware of their surroundings yet. In Graze mode, you still can get the awesome Trance energy, but it only comes from destroying very specific enemies (i.e. bosses) and from bombs, which, surprise, do not go off automatically. The Graze mode is deemed the more difficult of the two, but that also has a lot to do with your play style. If you enjoy waiting and relying on a transformation to save your ass, Spirit Mode is the way to go. But, if you’re more of a “bootstraps” kind of player and also want bragging rights, Graze is superior in that sense.

Speaking of superiority, Danmaku Unlimited 3 has the best goddamn soundtrack that you could hope for with a shmup game. Whereas I feel a lot of modern and even classic shooters tend to rely on more tinny and artificial music, Danmaku Unlimited 3 has amazing, driving and absolutely crushing guitar riffs and drum beats, giving it an incredible edge over the average shooter. I have nothing against the sights and sounds of CAVE shooters or the Touhou series, but, pound for pound, my money is best invested in the Danmaku Unlimited 3 tunage.

There’s also the three difficulty settings, which I need to touch upon because it goes into the cornerstone of why this game is fantastic. You have the tutorial (which isn’t really a difficulty setting but whatever) and then the three: Easy, Normal and True. Easy is, genuinely, easy for players who’ve done shmups before. The bullet density is far less, the number of opportunities to power up are higher, and you generally feel like the game is relaxing its grip upon the control of things. Normal is what the devs would expect a seasoned player to want to enjoy, and it still comes down to some serious madness as early as the third stage. True is a bat out of hell from the very beginning, but here’s the thing: you won’t just automatically die. You’ll have moments to redeem yourself, because everyone makes mistakes, and you can learn and compensate for what you’re supposed to be doing. And therein lies the beauty of Danmaku Unlimited 3. 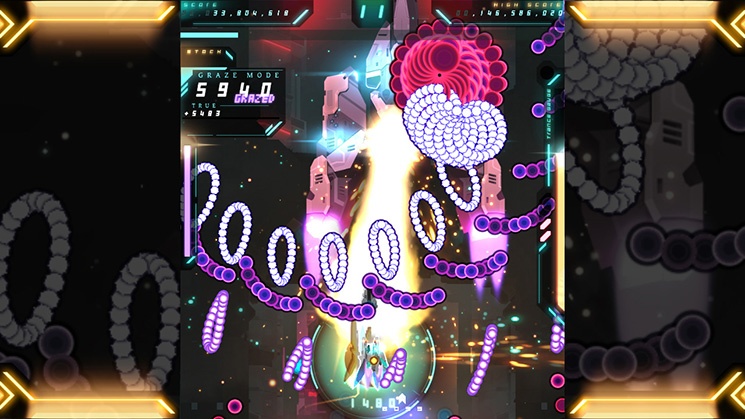 It seems like a very easy thing to do to simply create a game that’s unbelievably unfair and just pummel players until they give up or until they memorize a complex and ridiculous pattern in order to make it out alive. It probably isn’t, I’m not a coder, but that’s how it appears when I pick up a game and it simply thrashes me into the floor. Danmaku Unlimited 3 is the Arnold Schwarzenegger of the shmup world. Though it appears hulking and intimidating, it genuinely wants you to succeed, and will help you get your building blocks and fundamental tools in order to move forward on your own. It won’t taunt you or harrass you, but it certainly won’t go easy on you. Once you understand it and are ready to ratchet up the difficulty, Danmaku is ready, and so will you. Once you finally get to the point where you can run in the challenge modes on True, you feel like a goddamn champion, and that’s because you earned it. That’s how Danmaku Unlimited 3 made me feel: like I got better through playing, not simply memorized a way out.

This has been one of the first shooters where I really, really wanted a swivel mount for my television, and that’s not just because of the gorgeous graphics and fluid animation. Danmaku Unlimited 3 is, simply put, my favorite shmup experience on the Switch to date, and it’s one that I keep coming back to time and again between games. Even if I only have a few minutes, being able to run a stage and test my high score abilities is fun, and I have my headphones at the ready to absolutely drink in that unbelievable soundtrack. If you’ve got half a heart to try shmup games, this is the place to be and the time to play. Quick, before summer comes and distracts you with the beach, drop into the world of Danmaku Unlimited 3: you won’t be disappointed.