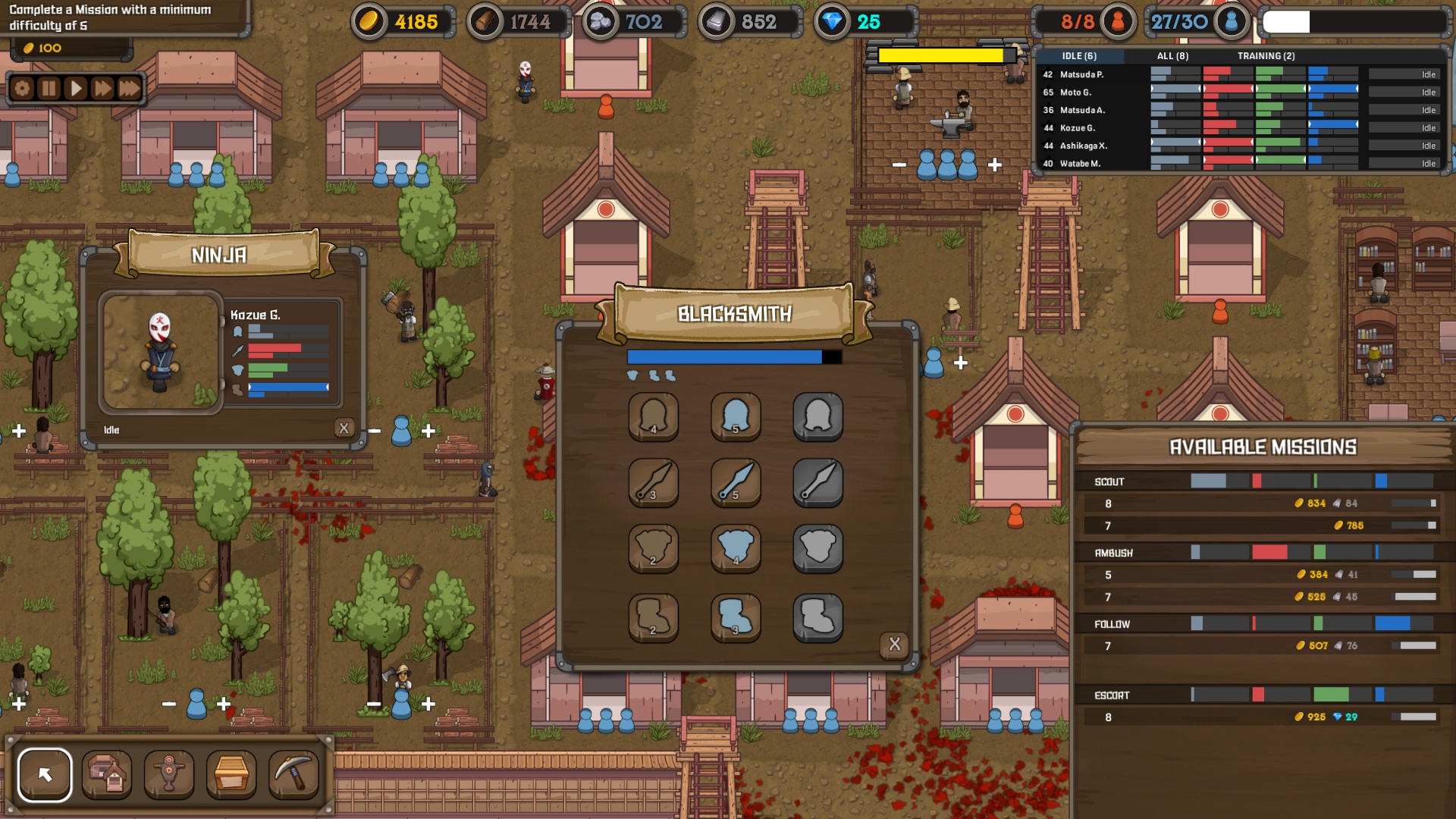 Ninja Tycoon is a Strategy/Simulation title in which players run a village that is defended by hired ninjas among other workers. Released on February 26th, 2018, by Endless Loop Studios, Ninja Tycoon attempts to combine the Management style genre with themes associated with the Far East, wrapped up in a simple package with Retro graphics and uncluttered design. But does it offer enough unique qualities to pull in players from these vastly popular genres?

Ninja Tycoon begins with your normal tutorial mode, which explains to players the ways you expand your admittedly small village. There are surprisingly few buildings to choose from compared to most Management and Simulation titles; I started with homes for my workers, the Ninja house where you hire said Ninjas, plus some resource locations to gain wood, stone, and so forth. Building the library opens up research, but the volume of new content present there is surprisingly low. The training yard allows you to raise the four skills all Ninjas share; the upgraded version provides specialization, but it’s a vague system – I’m not sure what benefit I gained by choosing one of the four skills for my ninja to focus on. 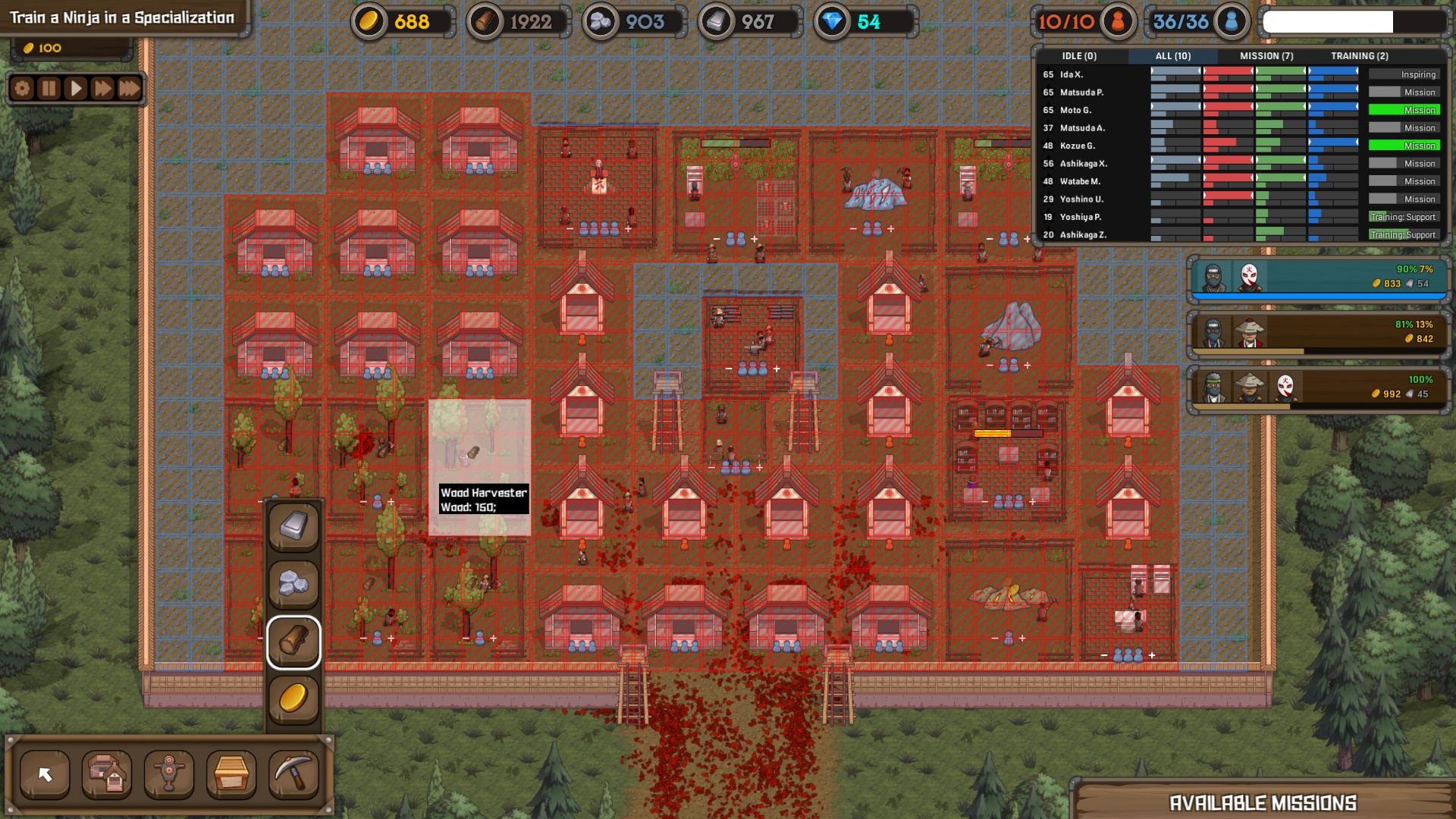 In addition to running the village as a whole, there are missions you can send your Ninja crew on for extra money and resources. However, I encountered a bug numerous times where I would send a group of them off but the status bar wouldn’t update and they just never came back. There was no way to cancel the mission once I had accepted it, which also meant my troops were gone the next time the redundant, incessant Raid happened. Raids are a mechanic where a warning count-down bar appears, and an enemy village or whatnot shows up to attack your land. Complete with trolls or ogres and warriors, Raiders who aren’t thwarted at the gate come inside and damage your buildings. I had several periods of time where the frequent Raids were vastly delaying my progress due to the cost of repairs; it felt unnecessarily redundant after a while.

One minor thing I enjoyed tremendously is the mechanic where your Ninjas-for-hire are named after people on your Steam friends list. Each time I built a new Ninja house I had four ninjas-for-hire to choose from, and players I interact with the most on Steam appeared more frequently. In game terms, it does not affect the character beyond a name, but it’s a cute way to create some attachment and bias towards those Ninjas. Sadly, this is where my praise begins and ends with Ninja Tycoon. The game does what it sets out to do: Players take the Management role, and there are plenty of Ninjas to command. But the lack of content is staggering; I kept waiting for more options and embellishment to kick in after the tutorial level, but those updates and expansions just never came. Ninja Tycoon does have Steam Workshop enabled, but even that free DLC is no excuse for the game itself to feel like a permanent demo.

More objectives and themes spring up as you progress, but it all feels watered down. Early in the game, my village took over another territory, and I had to choose which Ninjas would go and set-up this new dominion. Then, the game shifted to me playing there, instead, but left me in charge of sending trained Ninjas to help defend my original province. However, I couldn’t hop back and forth and see that former village; I just had to design the new one from the ground up. And, once again, I didn’t receive any new content for my trouble. In fact, during this level, the game auto-saved over my manual save for some inexplicable reason, and at the worst possible time — I was locked in, unable to finish the mission, due to the timing of that save. I had to start an entirely new game to progress, which is an unacceptable bug in my book. 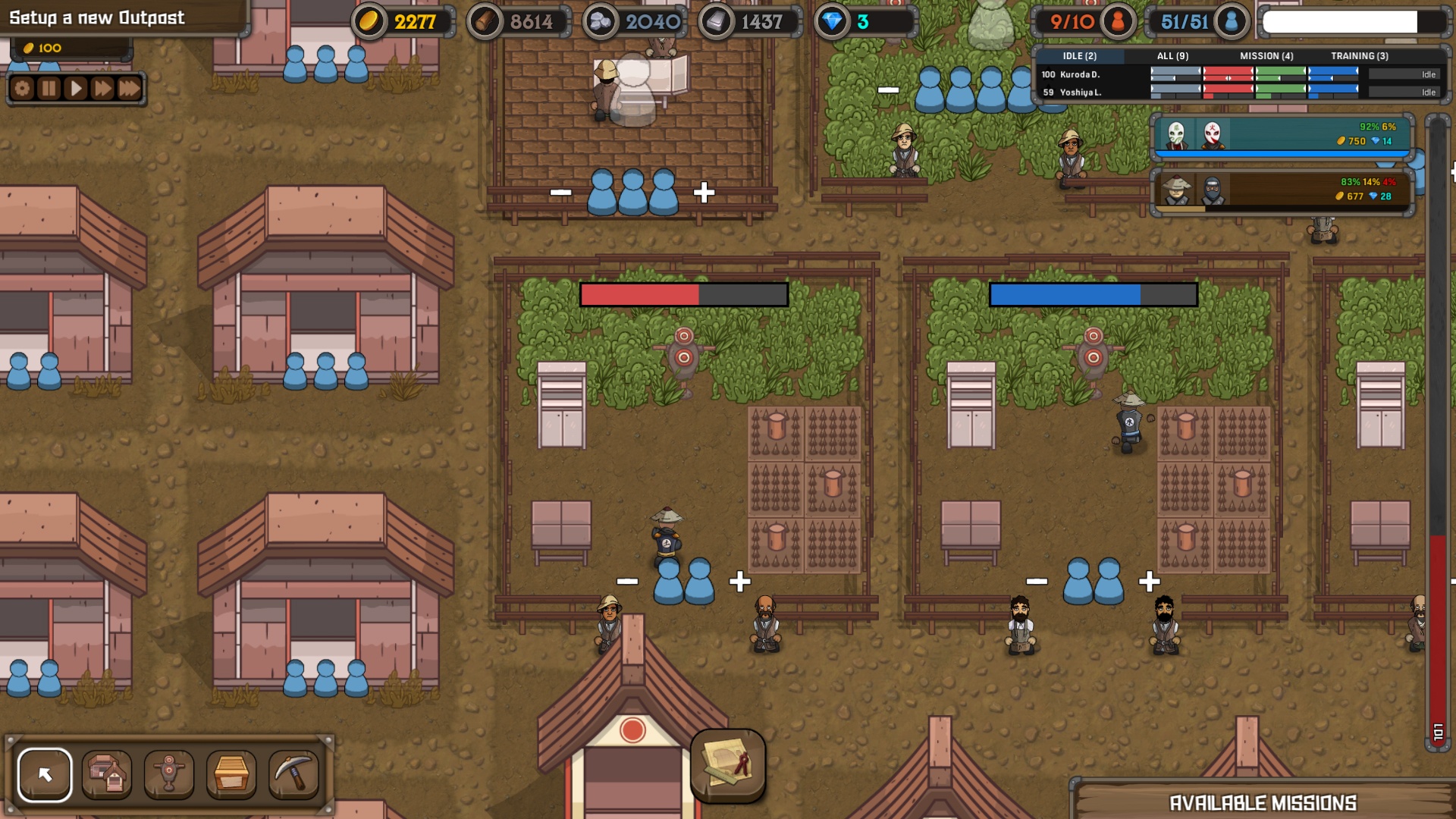 The graphics and soundtrack of Ninja Tycoon are passable and on-theme, but the simple, dated look and basic interface only lend further to the feeling that this is half of a game. The limited content just feels like being trapped in a tutorial mode, and the persistent bugs and weird design choices enhance that sensation further. I enjoyed the mechanics, limited as they were, and having Ninjas named after my Steam friends was a cute bonus. But even with Steam Workshop support and new DLC being created by the community there just isn’t enough content here to recommend this title.

The lack of content underscores the Management aspect of Ninja Tycoon because there just isn’t enough to manage; the lack of variety in things to do, ways to expand, and new stuff to learn dramatically diminishes the Simulation aspect. The incessant Raids are arguably the most significant challenge, especially early on, and the buggy Mission system only expands upon that so much. I would love to revisit this title down the road, but only if considerable amounts of new content has been added. As it stands, Ninja Tycoon is just too close to a permanent demo for comfort.