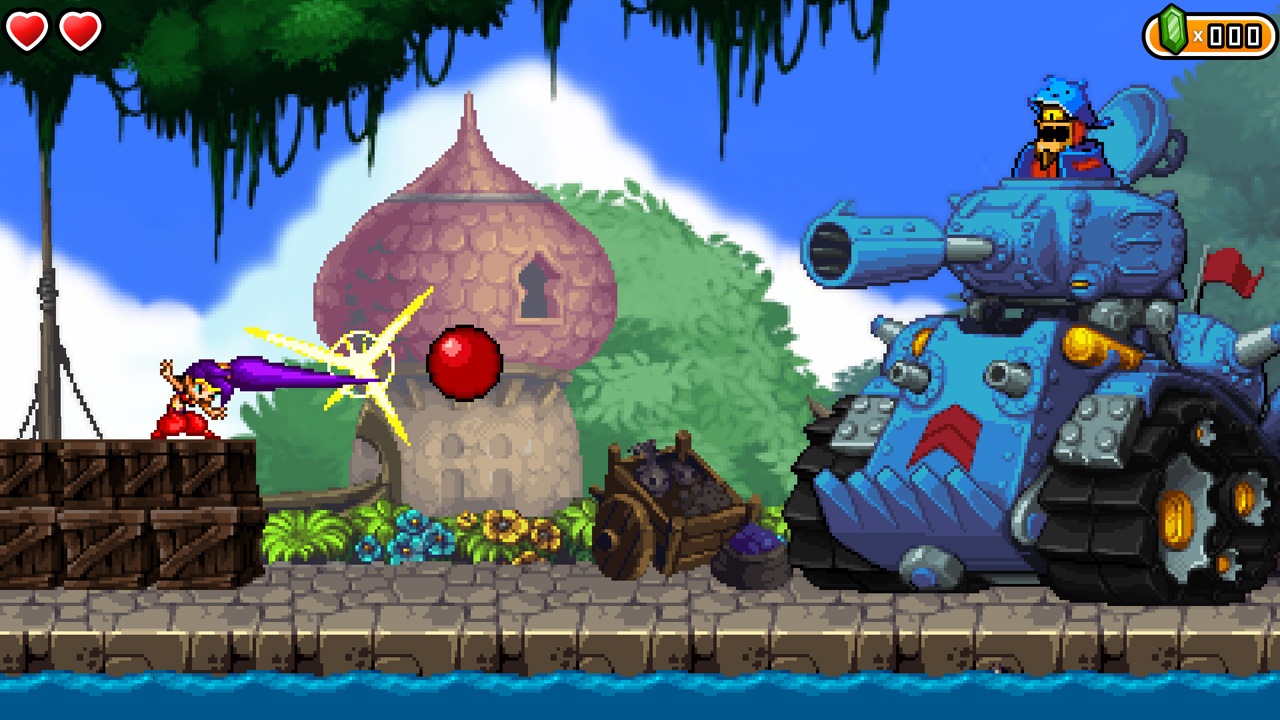 It’s really cool and interesting to see the Nintendo Switch draw the attention of developers not just for their biggest and newest projects, but also some of their classics that could use a little more love and a fresh audience. Wayforward has already enjoyed a bit of success in the Nintendo arena after Shantae: Half Genie Hero launched last summer to much fanfare and positive squealing. Now, we take a step backwards in the timeline to behold one of the stronger entries in Shantae’s series, Shantae and the Pirate’s Curse.

Shantae and the Pirate’s Curse is a weird place to come in on the saga. It’s well after the original game and even after the reboot in 2010, so there are events that have already happened in the timeline. Shantae has lost her genie magic to Risky Boots, and she’s now living as a human, still protecting Scuttle Town but doing so as a human rather than as a magical being. If you’ve played Half-Genie Hero, then you know Shantae gets her magic back, but I suppose the how and why are a mystery, so that’s alright. However, even if she had magic, Shantae can’t protect from stupid, and it turns out the Mayor has sold the town to Ammo Baron in exchange for chocolate, which has already been eaten. Before we can fully deal with that thing, however, we find out that Risky Boots has had her henchmen and weapons stolen from her, and the presence of dark magic suggests that the evil Pirate Master, a legendary bad guy defeated long ago, may be trying to return from the dead and destroy the Sequin Land (where our story takes place). Reluctantly, Shantae teams up with Risky to find out where the Pirate Master has hidden his grave and defeat the darkness once and for all. 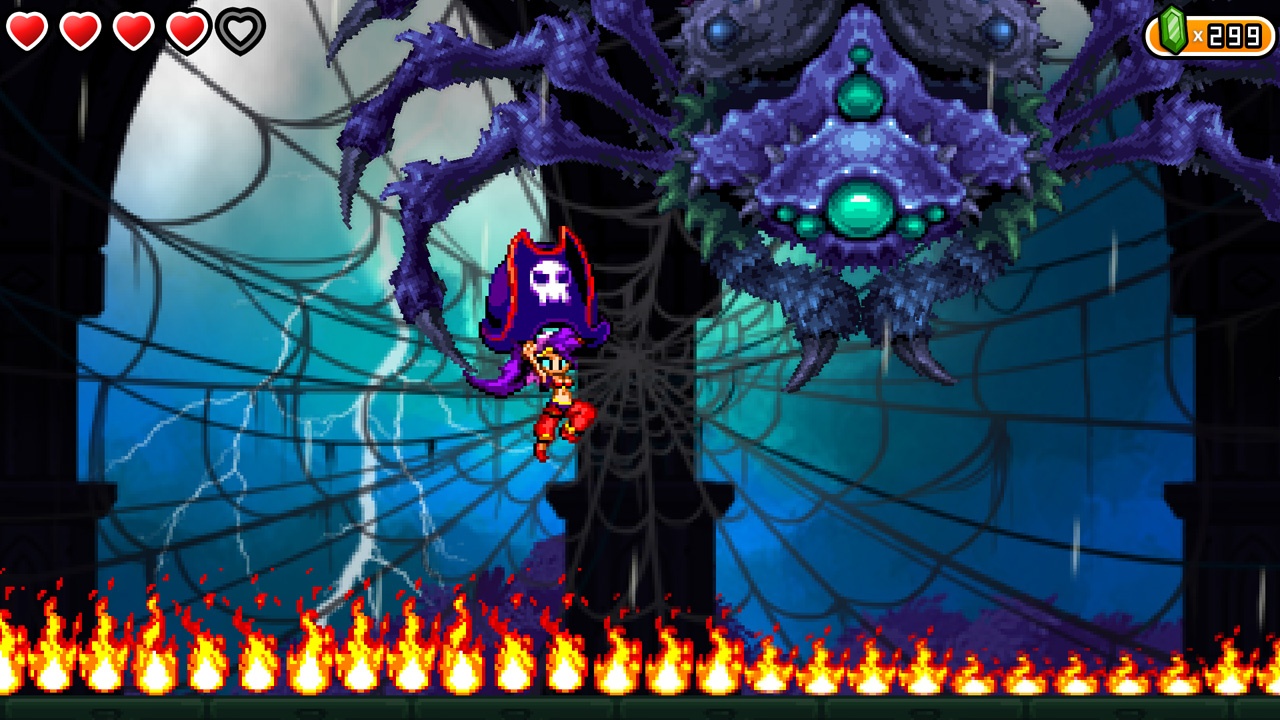 If there’s one thing Shantae does excessively well, it’s sidescrolling adventure, and there’s a certain flair for it that Wayforward captures in a way that can’t be properly explained. Shantae moves and whips with the best of them, and it’s always a tight and strong experience. Since there’s no genie magic to speak of, Shantae still has her hair (which is such a dope weapon) and also picks up a few items along the way that help her get the job done. You start off finding simple stuff that is limited use, like a bubble to deflect attacks or a floating spike ball that damages people who get too close. But, soon, Shantae finds awesome pirate gear to use herself, like a flying hat, a smashing sword, and, oh yea,  A GUN. I don’t know why, but it gives me nervous giggles that a slightly flighty heroine like Shantae spends half the game running around with a pistol, but it works and it feels organic, so you can’t be totally mad at that.

Additionally, Shantae gets back her genie lamp early on, but there’s no magic inside for her to utilize. Instead, it works with this suction mechanic that does three important jobs. It can get gems back for you if they’re a bit out of reach, it can remove noxious vapors that might be in the air, and it’s also used to retrieve the dark magic that you’ll periodically knock out of bad guys. There are twenty Tinkerbats that have been possessed to become Cacklebats, and they’re hidden/not hidden throughout the land. Shantae needs to find them, beat them up and take back the dark magic. If she doesn’t, you just get this so-so ending that tells you, straight up, you gotta find that magic. Finding it gives you the true ending, which segues nicely into the next game and also ends everything on a high note.

Now, as for the game itself, Shantae and the Pirate’s Curse does a few things different that I really enjoy. For one, since Shantae has no magic throughout the game, there aren’t as many silly and crazy moments as Half-Genie Hero. I loved the dancing and turning into different animals, but there’s something more satisfying about Shantae finding some boots that allow her to Kool-Aid Man smash through walls. Additionally, since this game was created without stretch goals or bonus material in mind (sorry, Kickstarter fans!), it’s a more complete idea from start to finish and also feels cohesively longer than Half-Genie Hero.  The focus is more on the gameplay and the collection of items and gems and less on funny dialogue and interjected moments of brevity that happen for…seemingly no reason. There’s less voice work, to be sure, but that’s not a bad thing either. This game is incredibly solid, and the bosses, items and overall balance feel better, not to mention it’s inherently darker. After all, you’re trying to stop a damn ghost from coming back from the dead and you have to beat a bunch of stuff up and YOU HAVE A GUN. 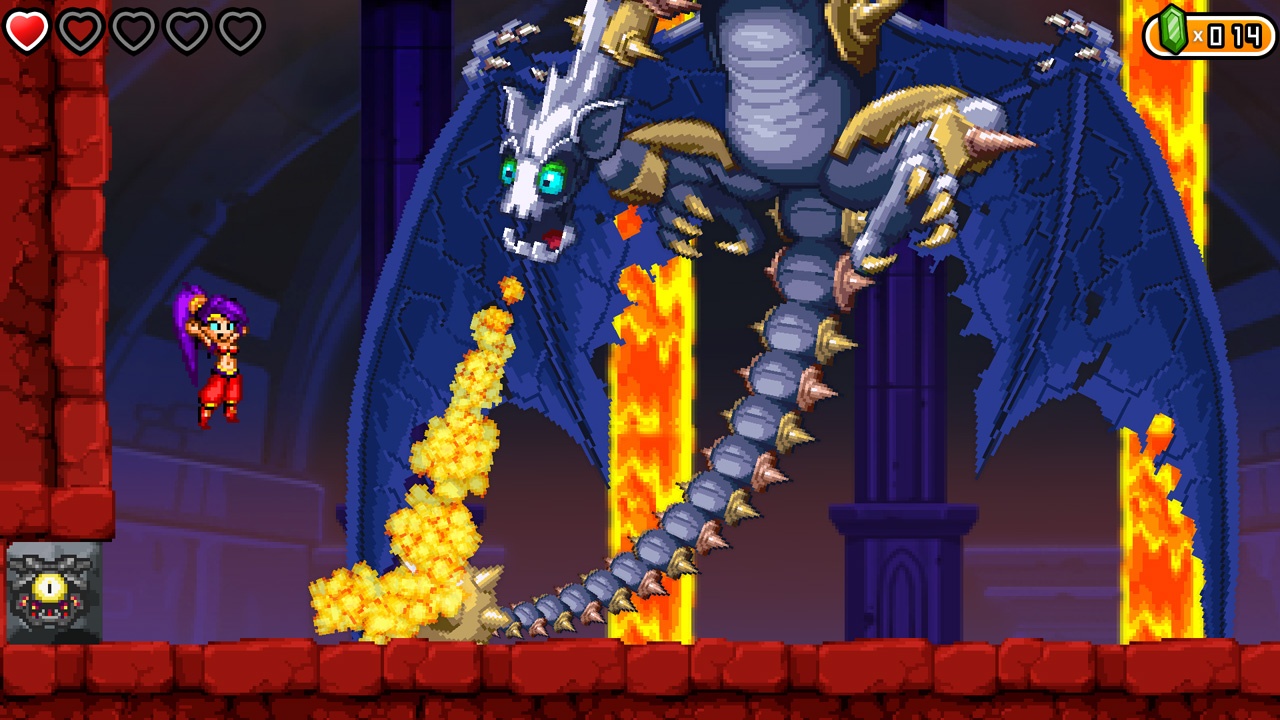 However, not everything is perfect in porting land. Shantae and the Pirate’s Curse got some good treatment to come to the Nintendo Switch, including HD rumble implementation (the little things really count) and the avatar artwork during dialogue being blown up and polished to look fantastic on the small and big screen. But playing on the big screen shows that the pixels are really stretched out and kind of rough to behold. I played Pirate’s Curse on the WiiU years back, and I never noticed it being quite so upscaled, so either this is a fault of the higher resolution of the Switch itself or maybe this was a purposeful choice by Wayforward to remind folks that this is an older game that made a killing on the 3DS. And it’s not like it ruins the gameplay. If it really bothers you, be sure to just play it in handheld mode so it’s not as noticable, but damn this game is fun. Shantae still runs, jumps and kicks some serious pirate ass just fine, and I didn’t suffer a single moment of performance lapse during my saga. It sounds great, the music is actually quite polished, and I was more than happy to sacrifice a night of sleep to play it from start to finish, if only to unlock Pirate Mode so I could play it faster. Seriously, this is one of those great games that, once you finish it, going back and replaying it with everything unlocked from the beginning makes it almost unfairly fun. You’ve ever done a plus game on Chrono Trigger so you could solo Lavos? It’s kind of like that, but with a bigger ponytail.

Shantae and the Pirate’s Curse deserves to be on the Nintendo Switch because, in just a couple short years, the 3DS will be fully retired and then there won’t be a Nintendo console that has the Shantae library available. I’ve got my fingers crossed that Risky’s Revenge (preferably Director’s Cut) will be coming in the not too distant future, because Shantae and Nintendo go together in a way that’s like Sonic and Sega. Sure, Sonic’s been on other consoles, but he’s always got his home with Sega and, if there were ever another Sega console, Sonic would be there. As long as Nintendo is alive and kicking, Shantae started here, and Shantae should continue to thrive here. If you like awesome platformers and some really good writing to deliver a fully likable protagonist, then your wish has come true: Shantae is here.