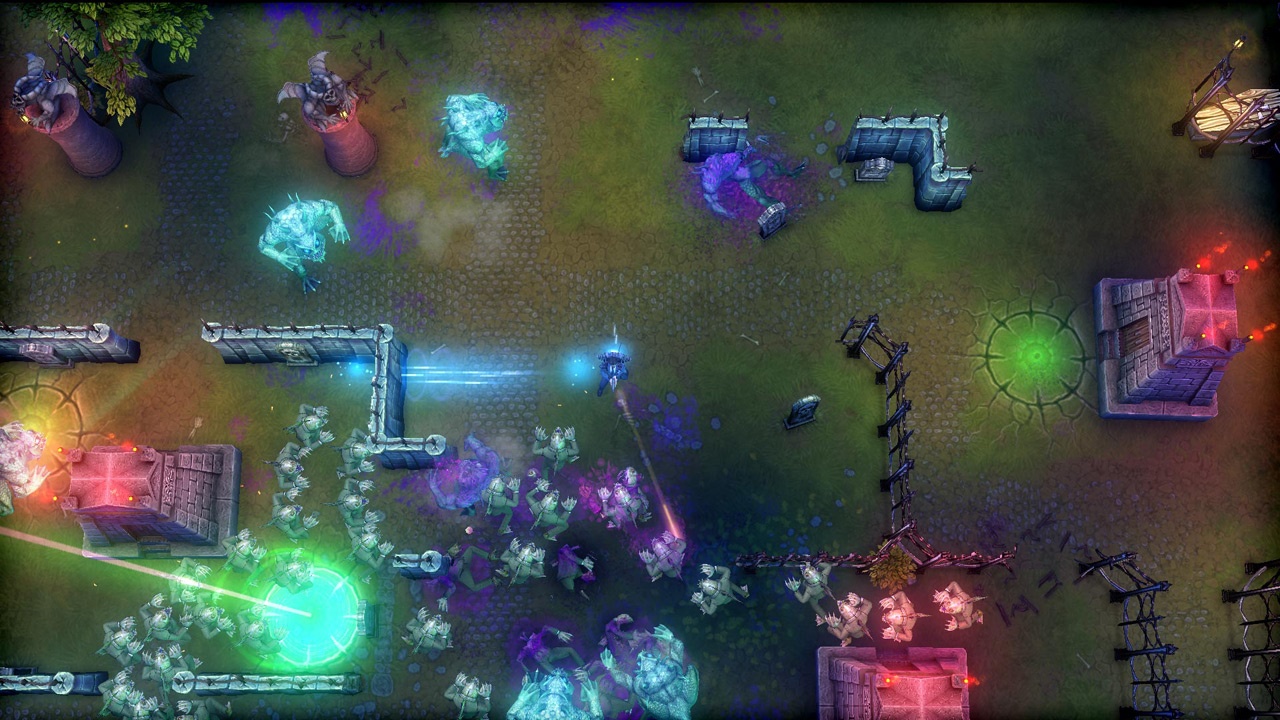 Fanfiction kicks ass. There’s no better way to put it: when a good writer has an idea to take an existing property and either a.) make a new story for it or b.) mash it up with some other existing property in an insane adventure, it’s a goddamn good read. There was a time when a fake version of the last Harry Potter book was being passed around, and, even though everyone knew it was fake, we all read it because it was fun and pretty damn good. Actually giving Pansy Parkinson a character arc beyond “evil and kind of ugly?” That’s just impressive. So when fanfiction spills into gaming and isn’t the creepy kind (please stop making cartoons bang each other), it becomes a pretty frigging fun ride. And when it’s helmed by the company that brought us some amazing twin stick shooters, it becomes a perfect storm of ludicrous and awesome. And I couldn’t think of a better company than 10Tons Ltd to bring us Tesla Vs Lovecraft.

In this particular universe, Telsa and Lovecraft are both at their primes when they encounter, whereas, in real life, either Lovecraft would have been a baby, or Tesla would have been an incredibly old (but still inventing) man, and neither appears to be the case here. Tesla is unveiling his new discovery of wireless electricity and promises that, soon, unlimited energy will be available for all. This PISSES off Lovecraft, who denounces Tesla and says that Tesla is dealing with stuff he doesn’t understand. Lovecraft later confirms this by setting fire to Tesla’s house through eldritch magics and monsters and this causes Tesla to be slightly miffed, especially since the monsters stole a bunch of his lab equipment. Far from just letting insurance cover the whole thing and dedicating his life to making affordable, cool roadsters, Tesla grabs his gun and a whole backpack of science and goes to settle the score. Tesla, of course, couldn’t imagine that Lovecraft was referring to monsters far beyond our human perception and that Tesla’s experiments might punch a hole into different realms where unspeakable horrors exist and could bleed into our world, but c’mon, dude! Tesla was gonna make electricity free! I can run the air conditioner forever!

As I already stated up top, Tesla Vs. Lovecraft is a twinstick shooter of the over the top variety, and it has every bell and whistle that you can imagine. Almost immediately, Tesla unlocks this ability to teleport, which sounds dreadfully unfair to the monsters, and, for the first few levels, it is. Tesla has up to three charges at a time that allow him to move, in almost any direction, away from the fray, and those charges do come back over a short period of time. In a twin stick shooter with hordes of monsters, the chance to basically lure enemies to one end of the map and then just bamf away to a totally different area is a big game changer, and reminds me a bit of a Time Recoil mechanic, but much more controlled and methodic. Whereas Time Recoil demanded that you get your teleports down to a fluid art to maintain staying alive, Tesla’s movements can be frantic or singular and, later on, act as a weapon.

But teleportation is far from Tesla’s only trick. In fact, shy of The Binding of Isaac, this is some of the biggest variety of perks, upgrades and general game changers that you can find under one roof. There’s the ability to increase weapon damage and your maximum health (ok, simple enough). You can add extra chambers to your gun to spit out more bullets at a time, or give yourself ricochet shots (starting to get powerful, cool). Then you become radioactive and poison everyone around you. You summon clouds of lightning that just periodically zap monsters. You even get regenerative properties, so that you automatically refill your health over time. Telsa gets a new choice of perk at each level up a la Crimsonland, but you only get two to choose from BUT they all stack. I got four supply perks that made my chance of items appearing increase by 30%, which means I had 120% extra chance to find items. I was SWIMMING in weapons and health powerups, not to mention the secondary weapons that are limited but still helpful, like the spark gun or the giant X-Ray sword.  You know what counts as an item that can just spawn? A nuclear weapon that does disastrous damage to every monster around you. It was a good time. Best of all, you don’t have to choose right away: if you get a level up while you’re in the middle of a firefight, the game waits until you check out the level screen to decide your perks, meaning you may end up activating three or four powerups at once. This is even before you encounter the epic perks, like the ability to teleport as much as you want without cooldown. Epic perks are far rarer, but they positively destroy every level you find them in. And this isn’t even counting the Tesla mecha armor which you can build over and over again, filling the screen with tactical electricity and being momentarily invulnerable. Tesla came to frigging play.

Tesla Vs. Lovecraft isn’t a one sided slaughter, however. Lovecraft has brought his A game, and this is where fans of the Lovecraftian stories are going to really get their rocks off. Each monster, from the Deep Ones to the Shoggoths to Cthulhu itself will show up in the course of the game, and there are dreadful swarms of everything. Some monsters will simply charge at you, but plenty will fire homing projectiles, penetrating lasers, or else just murder your face right off. You get the first map, which is about 33 levels, and everything comes at you the second you start up a stage (you always start in the mecha suit, but it falls apart soon afterwards). The very first boss you encounter might seem like a joke: after all, you’ll be level 8 or 9 by that point in the stage, and you can usually slaughter it without a second thought. But your second boss will take some serious effort. By the time you reach Lovecraft himself, you probably will have died a few times trying to work your way over, but you’ve gotten the hang of things. Lovecraft is a bastard, and he makes you work hard to defeat him. Not every level is just about shooting everything: sometimes it’s about shooting specific things, and Lovecraft is no exception. You’ll feel pretty awesome when you destroy him, and then he’ll remind you that he’s only the messenger/vessel: the real hell is waiting for you on another plane, and, oh shit, you’re going there. The game is far from short or simple, and you’ve got MILES to go before you sleep. 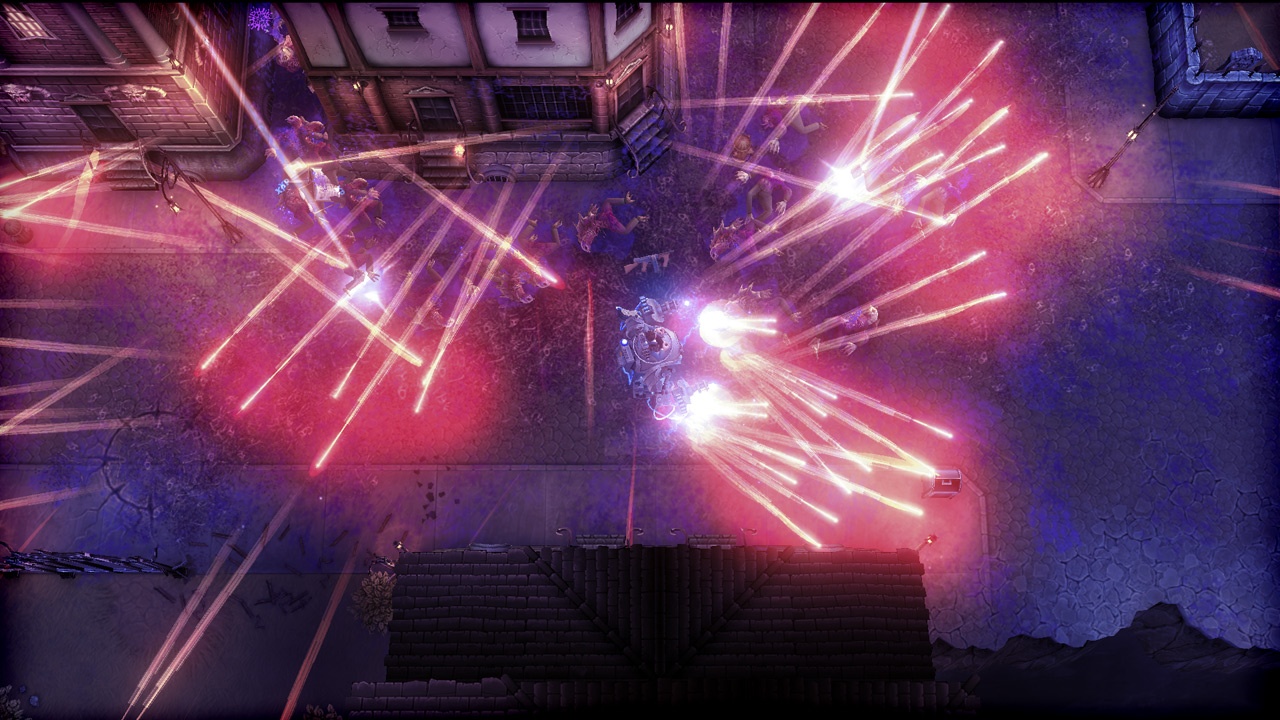 But, thankfully, Tesla Vs. Lovecraft is optimized for the Nintendo Switch. Some people may complain that some of the fine tuned options from the PC don’t exist, such as choosing how many enemies spawn on the screen at once. I say, thank God 10Tons figured out the best amount so I don’t need to watch my machine lag out with monsters or make the screen feel sparse and empty. With a title like this, with a potentially massive number of enemies, items and effects going on at once (ball lightning gun is ballistic), you want to keep things flowing and moving with elegant grace. Tesla Vs. Lovecraft does that with room to spare, making sure that you don’t see the performance dip or your precious shots go to waste once. Combined with the heavy metal soundtrack that permeates throughout, and you realize that this is a goddamn good shooter and a great port to the Switch. You can’t use a single JoyCon if you want to do co-op mode, however, but that does make sense with the button layout. So either carry around a second set of JoyCons or drop and get yourself a nice Pro Controller (or a 3rd party is good, 8Bitdo is alright in my book).

Everytime I see another good twin stick, I smile. It’s a simple genre, given life and made awesome by good developers with good visions. 10Tons Ltd has made some fantastic choices, and they continue to innovate the genre and make fun games, and Tesla Vs. Lovecraft is one of their best, if not the best, to date. There’s progression, survival mode, unlocks via daily challenges, and just a ton of reasons to want to keep playing. It’s a “just one more level” kind of game, and I can see it easily being replayable after the final curtain draws on the last monster. If you have any joy in your heart for destroying unspeakable demons with science, poise and a frigging arsenal, then you’ll have a blast with Tesla Vs. Lovecraft.