The wanderer is a master of the passive fist. A skilled practitioner of the passive fist can dodge any attack launched at them, defeating foes by simply blocking their blows until they are too tired to continue the fight and knocking them down with a single push. Players journey through the harsh desert wastelands of Zircon-5, defeating hordes of goons and saving the last of humanity from an evil overlord intent on making life as grim as possible. All without throwing so much as a single punch. Well, almost.

Gameplay consists of moving from screen to screen, defeating waves of bad guys via the way of the passive fist. The controls are simple enough. Pressing square will perform a parry. Most attacks in the game can be negated by a well-timed press of this button, so you’ll be using it a lot. One or two enemies will attack by grabbing at you, and this can only be avoided by dodging, mapped to circle. Certain enemies throw knives or bombs at you. These can be knocked out of the air by parrying, or returned to sender by pressing dodge. X performs a small dash, useful for avoiding environmental traps such as falling rocks and lasers. Triangle gives a sort of one-handed push. This is going to be the finishing move for most enemies. You tire them out by dodging and parrying, then when they’re exhausted you push them passively to the ground. 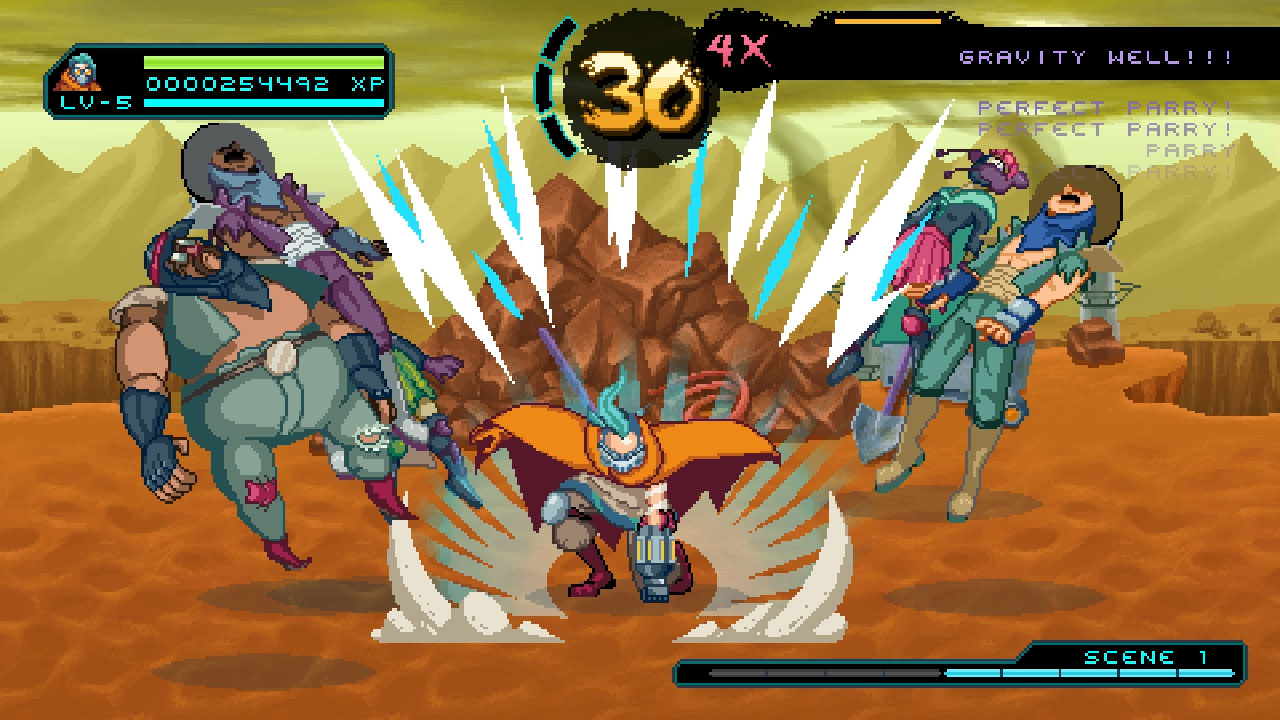 Over the course of the game, you’ll gain enough experience to unlock three special attacks which can be used after a certain combo threshold has been reached. Five hits parried will allow you to throw a single punch, twelve parries will allow you to perform a ground-shaking choke-slam and twenty-five will unleash a screen clearing attack called ‘the gravity well’. While these moves go against the grain of the whole passive fist philosophy, they are a welcome change of pace. The ten or so enemy types (not including  colour swapped variants) all follow a very strict attack pattern, so the game boils down to remembering how each goon attacks, parrying or dodging, then finishing them with a shove. These power moves speed up the process. They’re also the only way to defeat the games bosses.

While the concept of the game is unique, the execution needs a little work. Learning each attack pattern is challenging, but after a while things get a little repetitive. I completed the game in around five hour-long bursts, and I while I’m all for getting as much bang for my buck as possible, five hours was a bit too long for a game like this. Some of the stages feature environmental hazards such a land mines and falling rocks. This was always a massive annoyance rather than an added challenge as the hit detection was absolute garbage. Mines would get me while I was nowhere near them. The falling rocks only damaged my character, even though they fell on the enemies just as frequently. An impossibly huge laser blast got me every time. Whenever a stage had anything other than goons to bash, getting through was more luck than anything else. 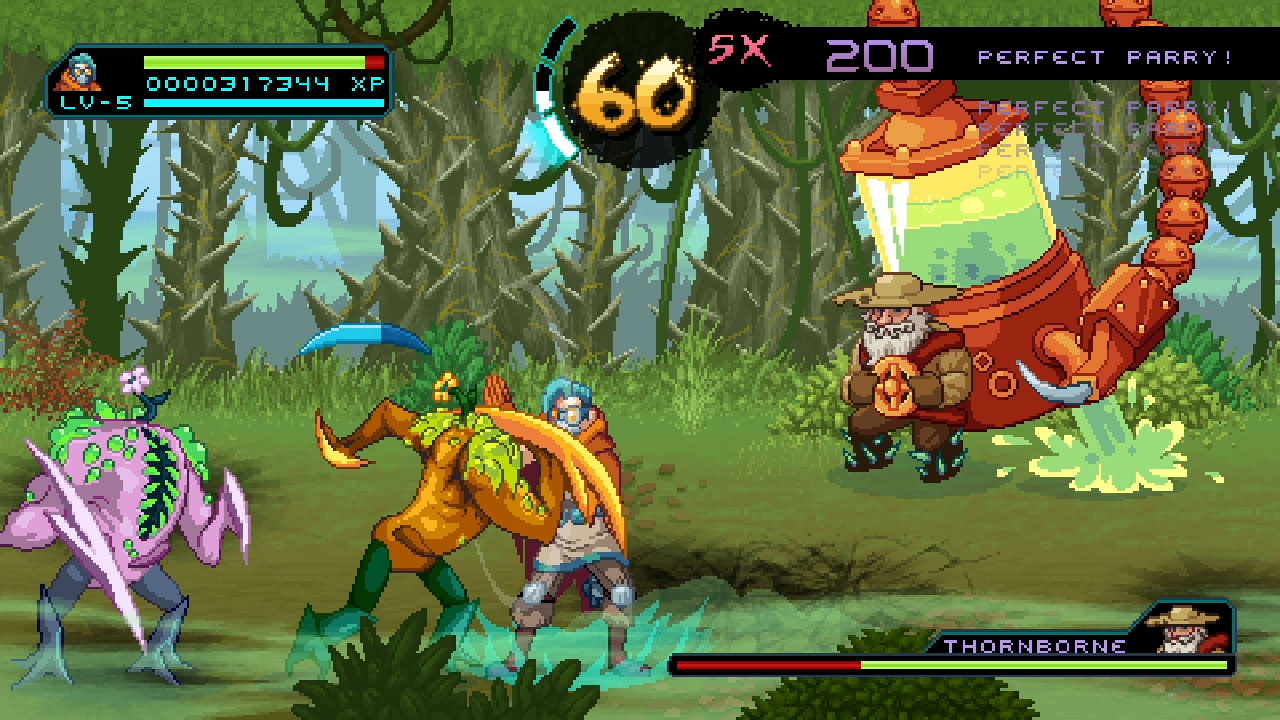 Visually it looks great. Think retro Mega-drive style sprites and you’ll be on the right track. The enemies are all well designed, and although there’s a lot of colour swapping in terms of goons, it’s more reminiscent of Streets of rage than a lazy re-use of character models, so I didn’t mind. The bosses are also pretty snazzy. Although they follow the same strict attack patterns as everyone else, they are inventive and full of personality, changing the pace of the game nicely. The levels and stages also look nice enough, but unfortunately tend to get a little repetitive after a while. While it’s not a massive problem, a little more variation would have been nice. Sound design as also done quite nicely. The soundtrack has a suitably retro feel and while one or two of the enemies could sound a bit annoying after a while, it wasn’t enough to ruin the experience for me. I’m usually quite a bit of a fussy critic when it comes to sound design, so anything that doesn’t make me mute the TV is always nice.

Overall, Way of the passive fist is an interesting concept that could use a little tweaking to be great. Clearly stages without getting hit felt great, like I was Neo at the end of the first Matrix or something. I was also certain I was playing some sort of anime tie-in game, as the whole thing looks like it was taken straight from the Cartoon Network, so the developer has done a great job at crafting a unique world. However, there are a lot of combat mechanics that feel a little underused. Unless I was dodging an environmental trap, I didn’t really feel the need to move around. Enemies would come to me one at a time, I’d press square for pretty much everything, unleash a power move where possible and move on. It also lacks any real replay value. Arcade mode is unlocked after completion of the story, but this is just a story mode again with a limited amount of lives. I’ve completed the game once and quite frankly feel no need to return to it. It’s a well made debut from Household games, and I’d be interested in what else they come up with, but Way of the passive fist is a little repetitive for my liking.

Way of the Passive Fist Review

Way of the passive fist is an interesting concept that could use a little tweaking to be great.