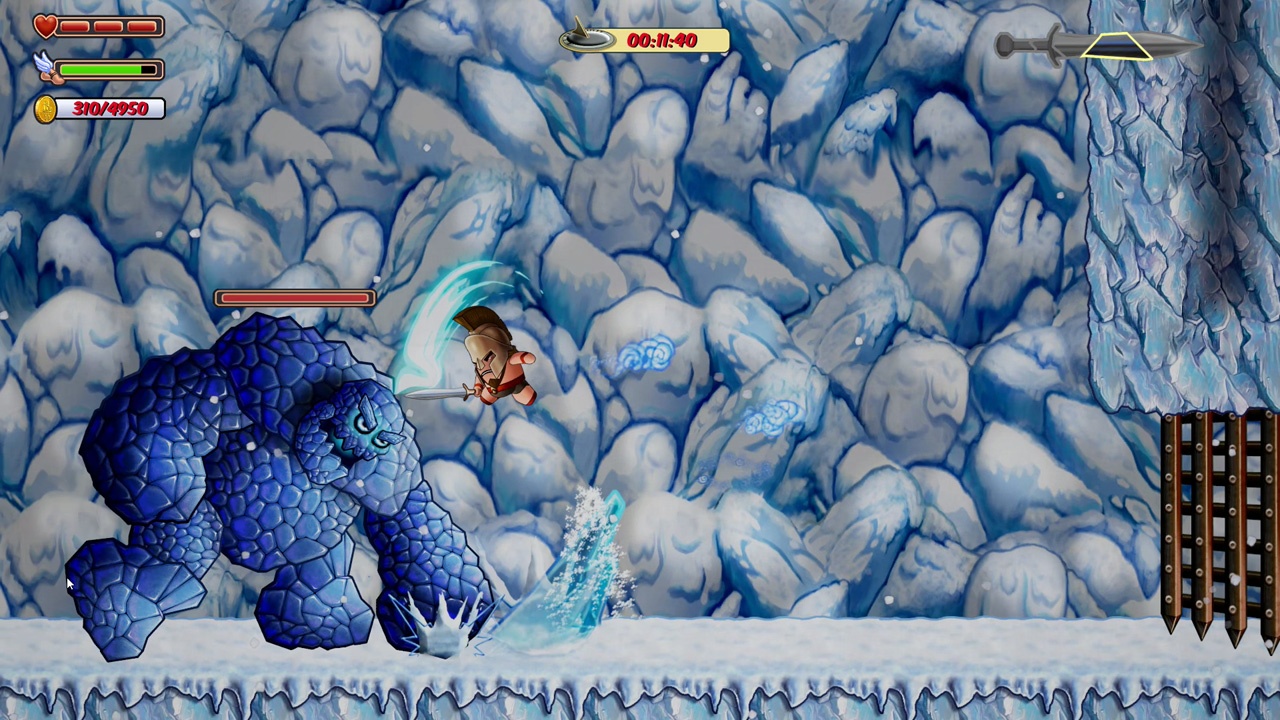 In ancient Greek history, the city-state of Sparta was one of the country’s most prominent settlements with its fearsome army of Spartan Warriors. Their legendary exploits have become infamous through classical literature such as The Iliad and The Odyssey; with blockbuster movies like 300 and Spartacus further highlighting their reputation to a more, modern audience. Video gaming has also been a medium by which their ancient stories have been re-told and now, Spartan, a platforming game developed and published by Sinister Cyclops, slashes its way onto the Nintendo Switch.

Based around the exploits of Leonidas, a king and fearsome warrior of the Spartan army, you set off on a quest to recover the city’s lost weapons, armour and gold which has all mysteriously vanished. To top it all off, strange portals have also appeared all over ancient Greece. Armed with your trusty sword and shield, your adventure takes you through twenty-four levels, which sees you traverse four, very distinct locations across green plains, over snow-capped mountains, through dank caves and along fiery, volcanic pits in order to pay retribution to whom, or whatever, is responsible for the disappearance of the city’s treasures.

Although based around a retro-style of gameplay, with a distinct Mario flavour, this action-platformer offers a very stern challenge. Each of the levels offer a wide variety of traps and enemies, with some of the platforming elements requiring a lot of thought on how to successfully traverse their puzzling paths. The best way I could find to describe its difficulty, was as a thinking-man’s platform game. This is by no means a run-and-gun, or hack-and-slash, style of game; it’s more about treading carefully and slowly. This is especially so, when you encounter any of the end-of-level bosses. These tougher-than-nails badass monsters from mythology, with Medusa being my favourite, provide a stern test of your mettle that requires a lot of defensive work. It’s vitally important to figure out their attack patterns and make the most of the landscapes, in order to ascertain any windows of opportunity in which to attack. These sections can take a huge chunk of time to get through, but can also provide some the games’ more thrilling moments. Each of the levels, particularly as you progress further into the game, have been designed with a non-linear format; meaning that there are several paths you will have to take in order to complete each of their objectives. 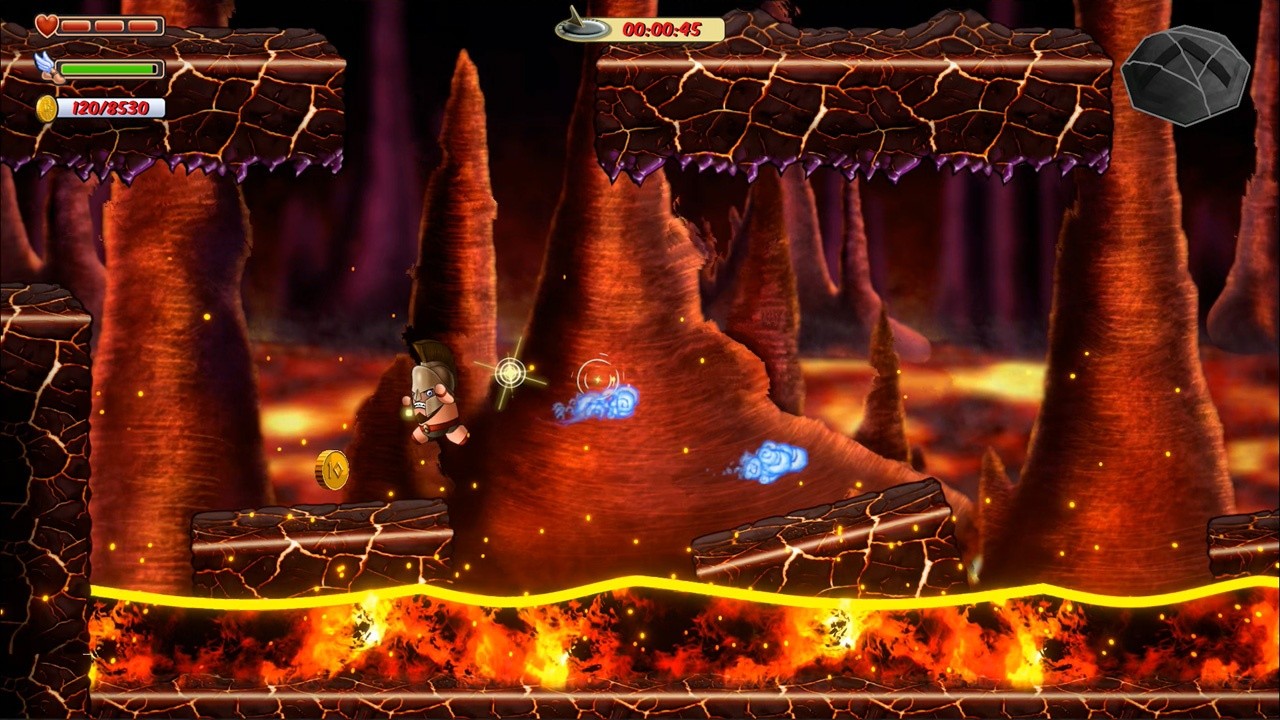 Exploration is an important factor amongst the platforming mechanics of Spartan. Each of the levels require you to collect golden coins, á la Mario style, of varying size and value. A total of the value’s worth is displayed on-screen, which also keeps a tally of the amount you have found so far. As well as these treasures, five chests are also hidden sporadically and in order to progress within the game, all of these need to be found in order to activate the portal that exits the level. Some of these can be fiendishly placed, particularly on the later levels, which requires some dextrous jumping, blind-leaping and defensive shielding in order to obtain them. However, the game also offers a spattering of checkpoints within each of its levels in the form of flags, another similarity to our plumber friend. Activating these checkpoints creates a temporary save that restarts at that point if you should find yourself within a grisly demise; a mechanic that is thankfully welcome, as is the element of any collected treasures not being lost again, as you will die a lot within the game.

There are two difficulty modes on offer in which you can play; Wimp or Spartan. The game is designed to be played on the Spartan difficulty as, although you can select the wimp mode at any time, the default difficulty reverts back upon starting each level. However, changing these settings has no bearing on the challenge that the game presents and merely offers you a further three segments within your life meter. Saying that though, many of the elements found within each level come with an insta-kill mechanic which often makes this inclusion of a differing difficult level a largely redundant one. Although King Leo can run, jump and climb, he can also defend and attack with his sword and shield. Fortunately, many of the enemies you’ll encounter can be killed instantly with just one swipe of your sword, however, even though the defensive capabilities of your shield can protect you from certain projectiles or attacks, you are unable to move or swing your sword whilst it is raised. I always find it very strange why some video games would change the mechanics of how a normal person would act, or react, in a given situation; moving whilst shielding and attacking is a basic function and to omit this characteristic, ultimately, gives the game a very unnatural feel to it.

Graphically, Spartan has quite a nice feel to it. Although retro-inspired, the game incorporates some bright and nicely detailed sprites in the developer’s use of the Unreal Engine, rather than opting for an 8-bit presentation. This makes a nice change to the aesthetics and also produces a distinct level of accuracy with character movement and placement. Standing on the edge of a platform, or hitting an enemy with your sword, is so pixel-perfect that you can literally balance on the very precipice of a ledge, or strike a foe with the very tip of your sword and it will register perfectly. This is a nice inclusion that shows the level of work that has been put into this title, as too many games these days contain a collision detection system that can be simply frustrating. The audio presentation also has a nice quality about it too, with a suitably fitting soundtrack that I never tired from listening too. 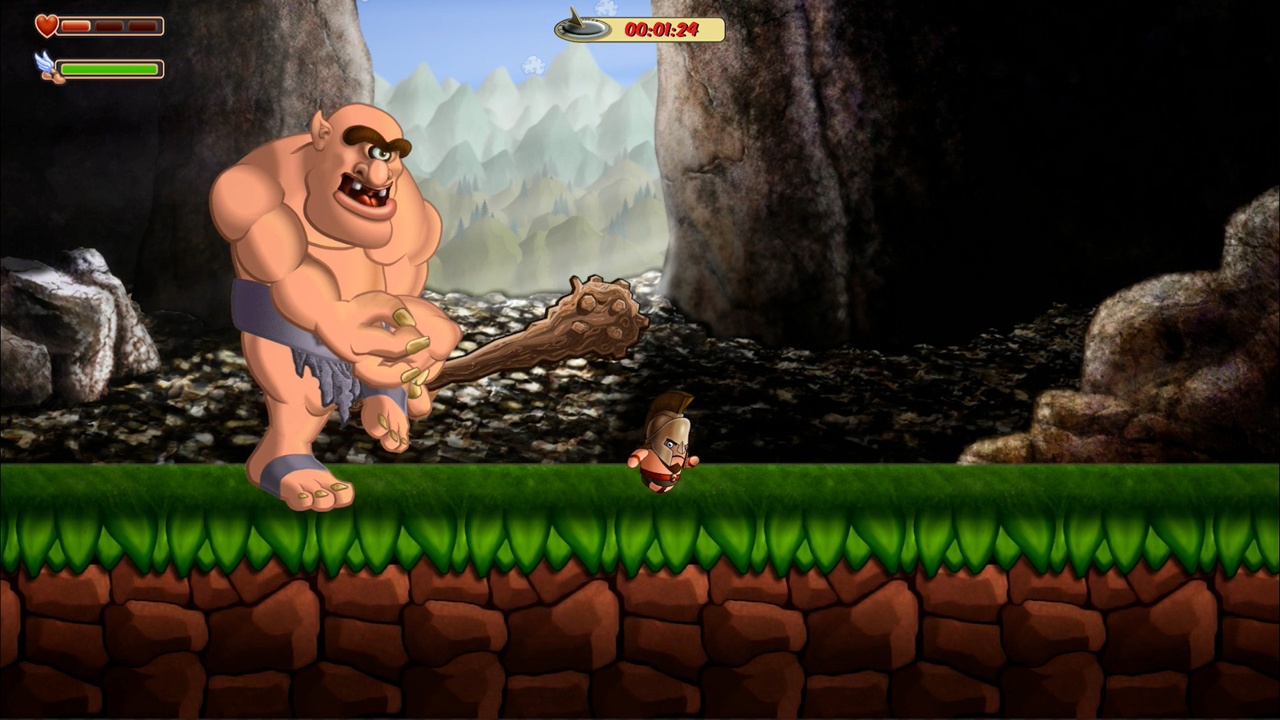 However, despite some nice features within the elements of the gameplay and aesthetics of Spartan, it also, unfortunately, contains some mechanics that can hamper your enjoyment of the game. This was most noticeable within the jumping element of the game as, although its collision detection was highly accurate, the act of leaping, an important element in the mechanics of a platformer, felt too airy and light for my liking. Despite being able to adjust your movements mid-air, the game still made me feel as if I was within an atmosphere of low density and I could easily have been on the moon, rather than ancient Greece. This is more of a personal dislike, as I feel this style of jumping is largely inaccurate within the context of a platformer and can lead to some frustrations with its cheap deaths or misplaced landings. There is no penalty to how far you can fall within Spartan, which is a good thing as you can climb to some dizzying heights or descend to the lowest depths. However, on a few occasions, a floaty, mistimed jump would see me falling back to near the beginning of a level and, sometimes, landed on a checkpoint which activated, meaning I would have to traverse back through everything I had worked so hard in conquering, just for the sake of an inaccurate jump.

This is a mechanic that becomes even more prevalent within the context of the game’s level design. With its non-linear format and requirement to find all the coins and treasures within a level, you can’t escape the need to explore every nook and cranny that the levels offer, as well as the need to backtrack if you haven’t fulfilled all of the requirements needed to activate the portals. The inaccuracies in its jumping mechanic can make this a frustrating experience, which ultimately can become tiresome over the long haul. Unfortunately, this, for me, was the overriding element throughout the course of the game’s length; the whole experience was that of a title which was, ultimately, not a very exciting one.

It’s by no means a bad game, but then again, it’s not a particularly good one either. The elements of its presentation and gameplay that are good, are actually sublimely done. However, the parts of it which aren’t so good, are also particularly bad, which really hampers any enjoyment that the game can offer. It does offer a very good challenge, one that will even test the most hardened of gamers and it also offers a lot of playtime for your money; some levels took me near-on an hour to complete and the boss fights are suitably lengthy. However, the pace of the game creates a particularly lacklustre experience that borders on the fringes of frustration and boredom. In order to create a more long-term appeal and a sense of replayability, each level’s completion displays the total time you have taken and awards you a collectible card, as long as you have fulfilled its requirements such as coin collection and boss defeats within a certain time constraint. However, I have serious question marks over the games’ long-term appeal and revisiting past levels, in order to complete the card collection or beat a personal best time aren’t really enough to make me want to go through them again. It’s a shame, as I really wanted to enjoy this game and I tried so hard to have a good time with it, and it certainly did have its moments in beating a previously unsurpassable part of a level, or defeating the challenging bosses, but ultimately, my overall experience of the game was marred by sense of unstimulating gameplay that grew tiresome by its completion. Just like the real-life Spartans, the challenges you’ll face are fearsome, but unlike the games’ namesake, it’s far from legendary.