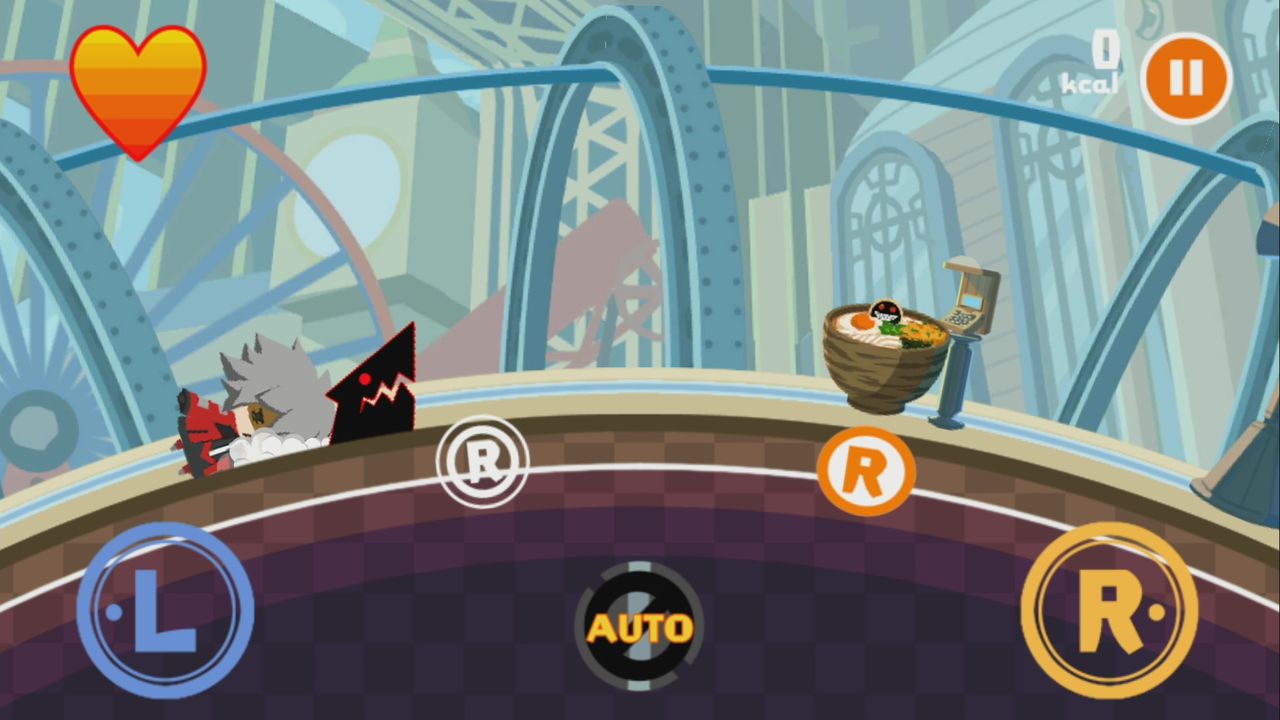 When it comes to the idea of “fan games,” the appeal and interest really factors in two variables: the fanbase itself and the core game. Touhou games are a fantastic example of this, because you get universally great fan games (Kobuto V, for instance) and then others that are, well, less than satisfactory. But the license exists, the fans demand it, and there ends up being some enjoyment, especially for the loyal who love seeing their characters in any sort of situation. However, if you’re not especially invested in the universe, you end up feeling a bit unfulfilled. That was, sadly, my takeaway from Eat Beat: Dead Spike-San.

Eat Beat: Dead Spike-San is a fan-universe game for the hugely influential (and entertaining) BlazBlue series, a game that is primarily the most over-the-top 2.5D fighter that I’ve ever seen. It’s one of those awesome games to watch where everything seems like utter chaos until you realize the level of strategy and reaction needed to achieve, break and counter ridiculous combos. This is not a fighting game: this is rhythm game that’s based around one of the main characters of the series (Ragna the Bloodedge) and, specifically, the brought-to-life version of Dead Spike, which is actually an attack Ragna does in the main games. Ragna and Dead Spike live in a nameless city and want to grow strong. So Dead Spike decides to eat…everything…to grow powerful. This is the beginning, middle and end of the plot of this game, which, for a rhythm game, is pretty involved, so let’s be grateful for that. 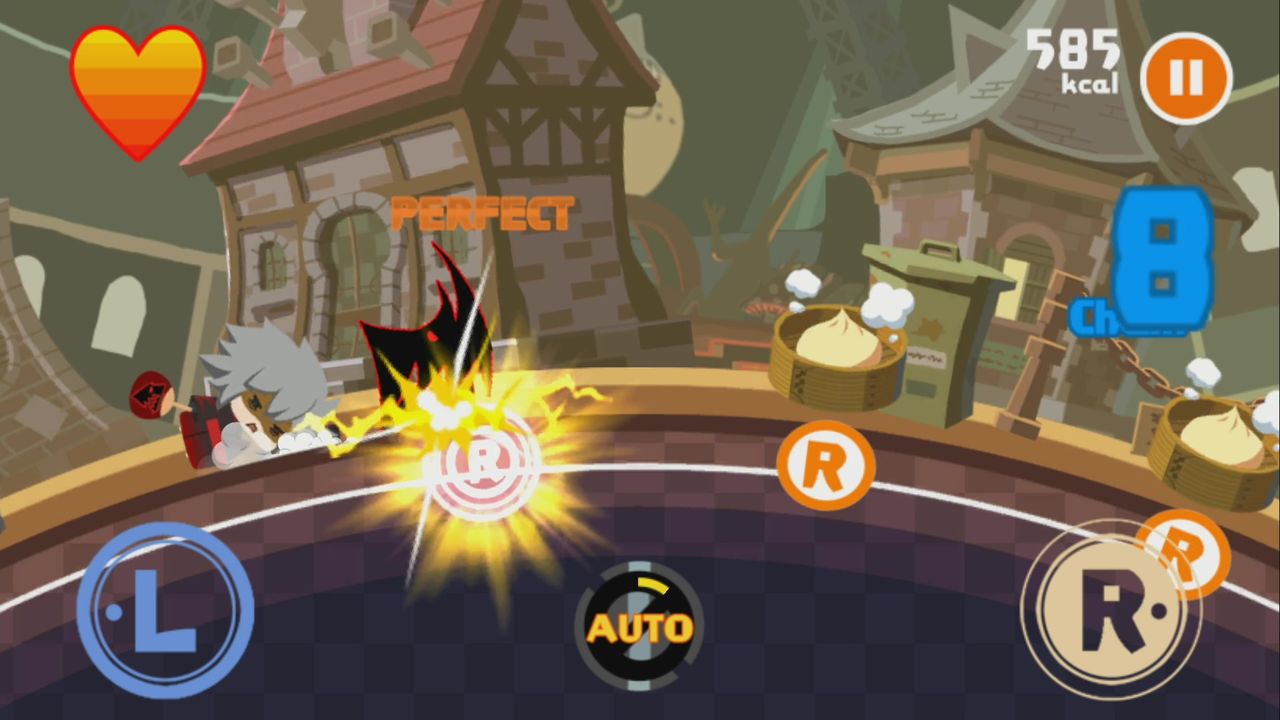 For a rhythm game, the mechanics are crazy simple: you only need to worry about left and right. Two buttons, two variables as the music pushes onward. For a visual idea of what’s happening here, Dead Spike-San drags Ragna along a pathway that’s laden with ramen bowls, giant barrels and other things that Dead Spike-San can eat to grow large and powerful. You’ll only eat them if you hit the button at the right time (you know, like every other rhythm game ever). Miss and lose health. Get enough in a row and activate overdrive mode, which makes it so you don’t lose any health for a period of time. Overdrive can be toggled to turn on automatically, or left to the player’s discretion for activation. Beat easy to unlock normal, normal to unlock hard, and accomplish enough great scores to unlock a couple other characters to play as instead of Dead Spike-San.

But here’s the problem. Eat Beat: Dead Spike-San was, originally, a free game for the mobile phone that incentivized you to pay to unlock the rest of the songs because, well, it was free and you want more songs. As a paid title with all current DLC baked in (thank you, Arc System Works), you don’t have to worry about popup ads or trying to justify this game to yourself. So the flaws of the title stick out immediately. Like the fact that this was a mobile game and, as such, it wants you to use touchscreen controls most of all. Everything looks like it was just dragged and dropped onto the Switch and then someone used GIMP to stretch it out to fit the screen. Sure, we have the BlazBlue chibi league mascots, so they don’t look awful, but there’s just this kind of funky appeal to it all that really makes me a bit uncomfortable with viewing it.

And the touchscreen controls. The buttons are huge but inaccurate, so I constantly felt like I was late hitting the buttons. When you get a bunch of back-to-back combo hits (which is Normal and above, constantly), you tend to miss one because of a laggy response time. So, naturally, you should try the physical buttons, right? Except for the buttons have been mapped in this bizarre, split-between-JoyCon way that doesn’t feel right in your hands. Sure, the response time is slightly better, but it’s like finding out you have a better grip on your bat after slathering it with mayonnaise. Better doesn’t always mean right. 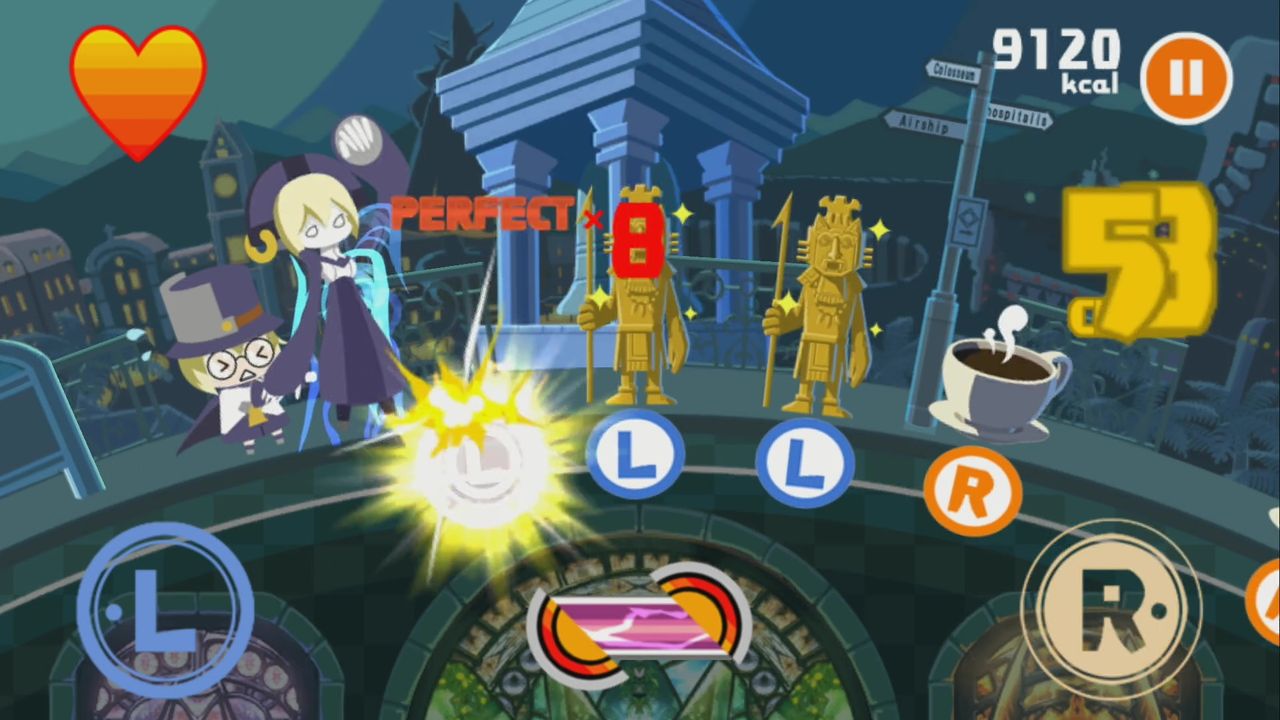 Lastly, lest we forget, this is a BlazBlue fan game, which means each and every song, top to bottom, are remixes of existing BlazBlue music. Now, again, if you are a massive BlazBlue fan, this isn’t a problem: the score of the games is very driving, and tends to be guitar heavy. In fact, this is one of my favorite setups in terms of music to jump into a rhythm game for. But it’s repetitive. Even though this Switch version has extra songs not seen in the mobile version, you can only stay enthusiastic with melodic guitar solos for so long. There’s a lot of same-same across the different tracks, and, once you’ve heard them all, you’ve, well, heard them all. There’s no variety, there’s nothing that jumped out at me. I was left kind of just feeling like I’d rather play BlazBlue, and since that doesn’t come out till June, I’m in a rough spot.

However, there is some good in the game. Eat Beat: Dead Spike-San is quite a bit cheaper than if you got the free title on your phone and then paid for all the DLC: honestly, cheaper by more than 75%. Additionally, the graphics are fun and cute, even if they are slightly stretched, and it’s great to have the funky, absurd notion of Dead Spike-San eating everything in its path. Additionally, since the controls are easy to pick up, even the casual rhythm fan can easily get into the idea of the game, but it really is hard to master. Limited score or not, you end up with a lot of replay value trying to max out your rank and unlocking some of the gallery photos.

In the end, Eat Beat: Dead Spike-San is a novel idea, a funny execution and a really good price for what fans will want to get. BlazBlue fanboys who are waiting patiently for Cross Tag will have a smile on their face as they rock out to MOTOR HEAD II or MUST DIE. But, for those who enjoy a more complex rhythm game or a more diverse soundtrack, you may feel things come across a bit lacking.