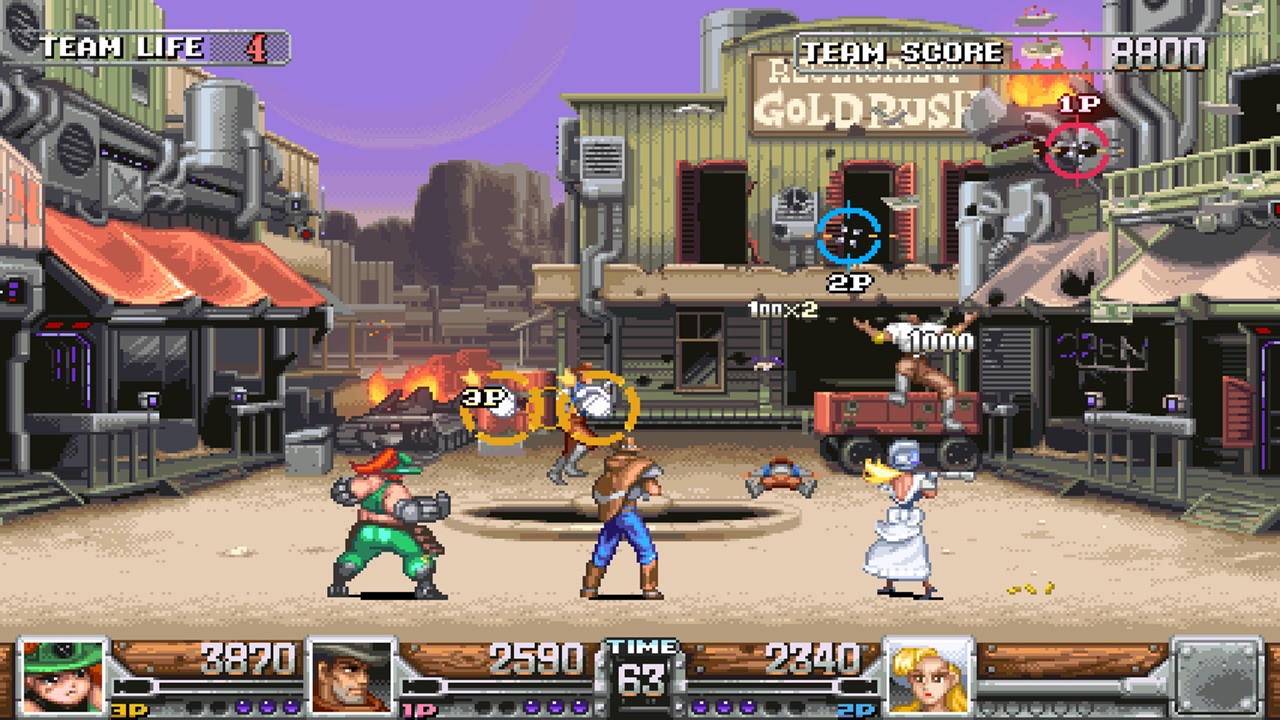 The Super Nintendo era, for fans, was one of the golden ages of video games. Sure, looking at it from a broader business perspective, it was a bad move that Nintendo made and was further down the road to sour relationships with 3rd party developers, but that’s water under the bridge. For gamers who just wanted to score awesome titles, the SNES was the place to be. This was the heyday of adventure games, platformers, JRPGS…man, it had everything! But we do tend to paint nostalgia with a more forgiving brush, so we forget some of the shortcomings that have since been ironed out with time and better technology. Which is why a game like Wild Guns Reloaded is so important. It really helps give you a great view of what made an SNES experience wonderful, what also made it frustrating, and why things aren’t still in the 16 bit era.

Wild Guns Reloaded is an updated remaster of the classic 1994 title, Wild Guns. In this game, you play either Annie or Clint, two gunslingers in an alternate world Wild West where Annie’s family got murdered and now you’re gonna make everyone pay. You shoot your way through multiple stages to eventually catch up with the bad guys what done you wrong, and, yea, shoot them too. This is a game that’s full of steampunk influence and sci-fi themes before steampunk really got insane in the West, so the framing and style of the game were really unique when it came out, not to mention fun overall. This Reloaded edition has some new levels, two new characters, and some new modes, on top of actually running significantly better than the SNES counterpart. If you ever get a chance to see video of it (or have played it yourself), you’ll see the original Wild Guns had plenty of slowdown after things on-screen got a bit too frantic, which was both a blessing and a curse. Being able to anticipate the slowdown meant strategizing good shots during the lag, but, with that removed, the game smoothly and accurately blows you straight to hell. 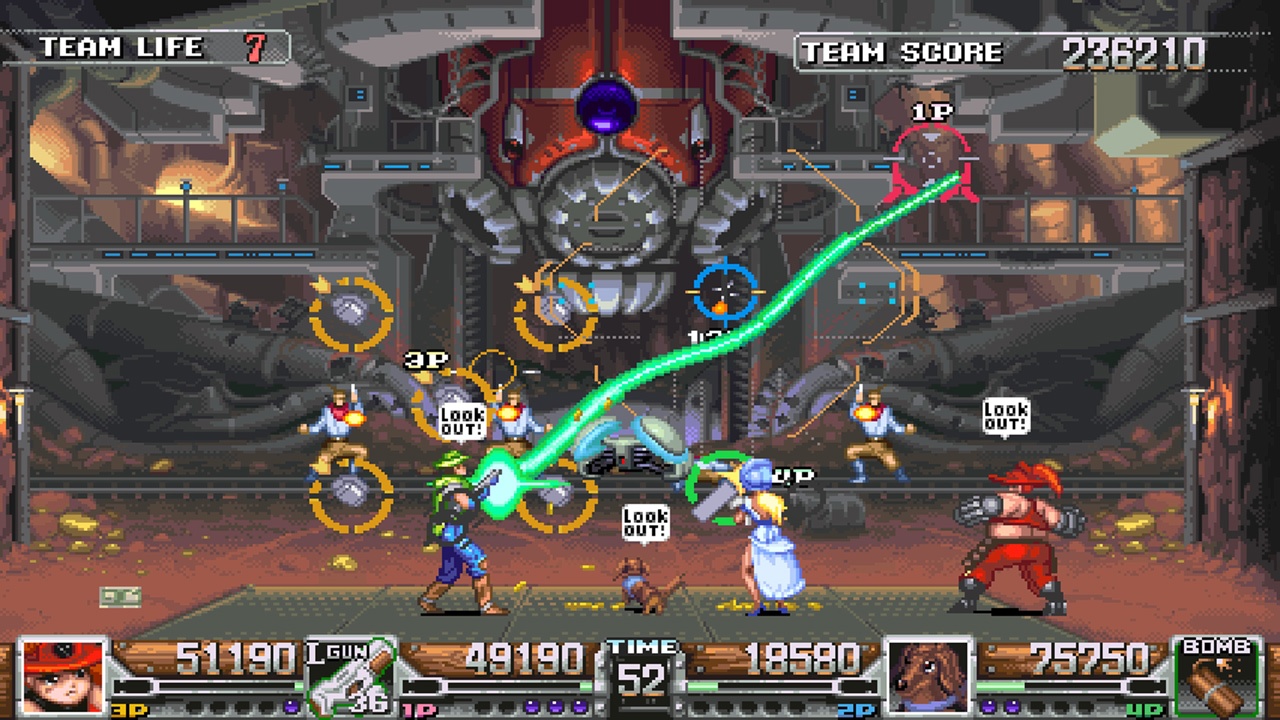 Wild Guns Reloaded is a shooting gallery style arcade game, and this works out in a few different ways that both succeed and kind of fail. On the one hand, the concept is straightforward: you have one joystick to move the cursor of your weapon as well as move your character. You can’t aim your gun to the left and jump to the right, causing some frustration when trying to not get shot and keep shooting at the same time. You do have the ability to dodge and jump, but these actions depend entirely on what you’re doing at the time. Not shooting means jumping, shooting means dodge rolling, and both are the same button. This is something where Natsume made a judgement call to not map out new functions with the new buttons available, and I have to respect that. They could have easily slapped the Wild Guns name onto something that was totally different and just collected bank from people impulse buying the brand. Instead, they did keep the classic elements alive, and that is pretty damn awesome. Especially when you consider the original game is now one of those obscenely expensive carts on eBay, and downloading ROMS is wrong, so having something as close to the original as possible while still offering more is excellent.

As something that comes from the SNES era, Wild Guns Reloaded is legitimately hard. There’s a special mode called Beginner that takes it easy on you, and it’s fun for simply wanting to see the game and figure out how things work. However, it will not record your high score, and there’s actual online leaderboards for this title, so you want to brag about your accomplishments. The lowest you can go and still have it count is Easy, and Easy ain’t easy. You constantly have things on the screen, from simple walking gunmen to guys far off in the distance, robots that roll in just to block your shot and explode, and any number of annoying traps and pitfalls that you can encounter. Early on, in one of the selectable levels, you find giant totem robots that shoot out immobilizing rings that won’t hurt you BUT will make it easy for other people to hurt you. The result is that this game isn’t really like you’d expect from the average gallery shooter. Far from on rails action like House of the Dead, you need to constantly be aware of where shots are coming from, where they are going to be and how to get your ass out of the way. The first time through, you’ll be CONSTANTLY diving, jumping, getting shot and using your “clear the room” limited attack when you should be saving it.

But, as we said, this is an SNES era game, which means repetition is the key to victory. There’s no roguelike elements at work here: the enemies will pop up in the same spots, at the time, with the same intervals, every time. The difficulty level will adjust how many and how often, but, once you map out the game plan, it’s never gonna change. This is what makes it so appealing to many folks is that, through memorization and reflexes, you turn into a total badass, killing and stomping ass like only you can. You learn to take out tables or destroy innocuous looking bushes ASAP because, soon, that’s where sharpshooters will be hiding, and they’re way less successful when they’re totally exposed. You have a grim satisfaction with knowing you know where they’ll be, and you took out their only chance to be hidden. Good job, killer. 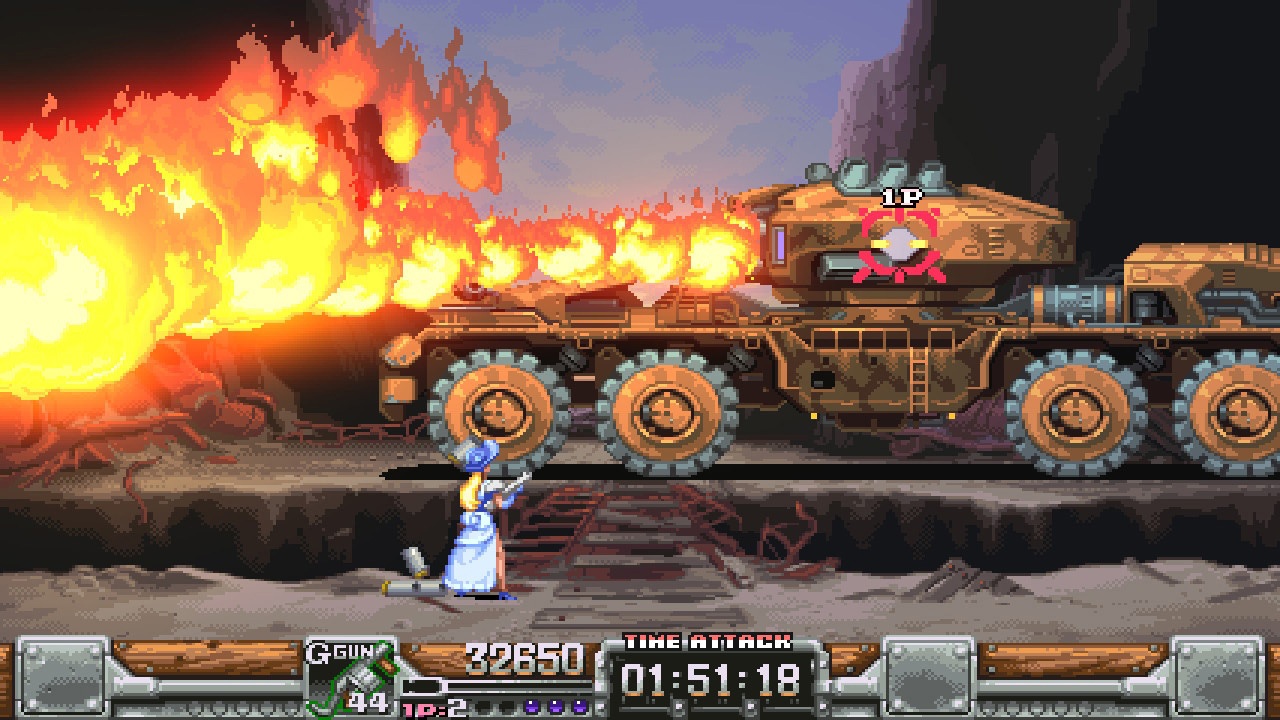 The inclusion of two new characters also means an expanded four player mode, which, in my opinion, does a lot more to fix the inherent issue of multiplayer for Wild Guns. Multiplayer mode means sharing the same pool of extra lives, so, if your friend sucks, you’re gonna be left with nothing to fall back on when the going gets tough. However, the number of enemies does NOT increase when you have more players, so the game, theoretically, gets easier. Four players at once not only quadruples your chance of success, it also adds more extra lives to the pool. Sure, it’s not proportional (three for two, four for three, five for four), but it’s a lot better than just the three for Clint and Annie. If I’m being frank, I hate the new characters. Battery is a dog that shoots with a drone and Doris is a huge woman who doesn’t have a gun, only dynamite. Battery, being a dog, is small, quick, but also is separate from his drone, so it’s even more stuff to keep in sync when running around. Doris is visually unappealing to look at and, since she only chucks dynamite, her attacks are slow, if powerful. However, when all four characters are on the screen, it’s like the assassination at the beginning of Kill Bill when everyone shoots down The Bride. Everyone brings something important to the table, and they all work together to RUIN stuff.

There’s actually a lot here to love if you’re a big supporter of classic SNES and well polished gaming. Even though the main game isn’t too long (even with the extra stages I’d give it less than two hours), replay on multiple difficulty modes, plus boss rush and multiplayer, means a ton of bang for your buck. Also, if you can beat Wild Guns Reloaded without using a continue, you unlock the original soundtrack and effects from the SNES release, which should be incentive enough for purists to grind out their weekend in the Wild West. Even though I still wish I could play this with a blaster, that’s a desire that harkens back to the 90s, and, if Natsume wouldn’t change it then, they won’t change it now, and that’s more than alright.