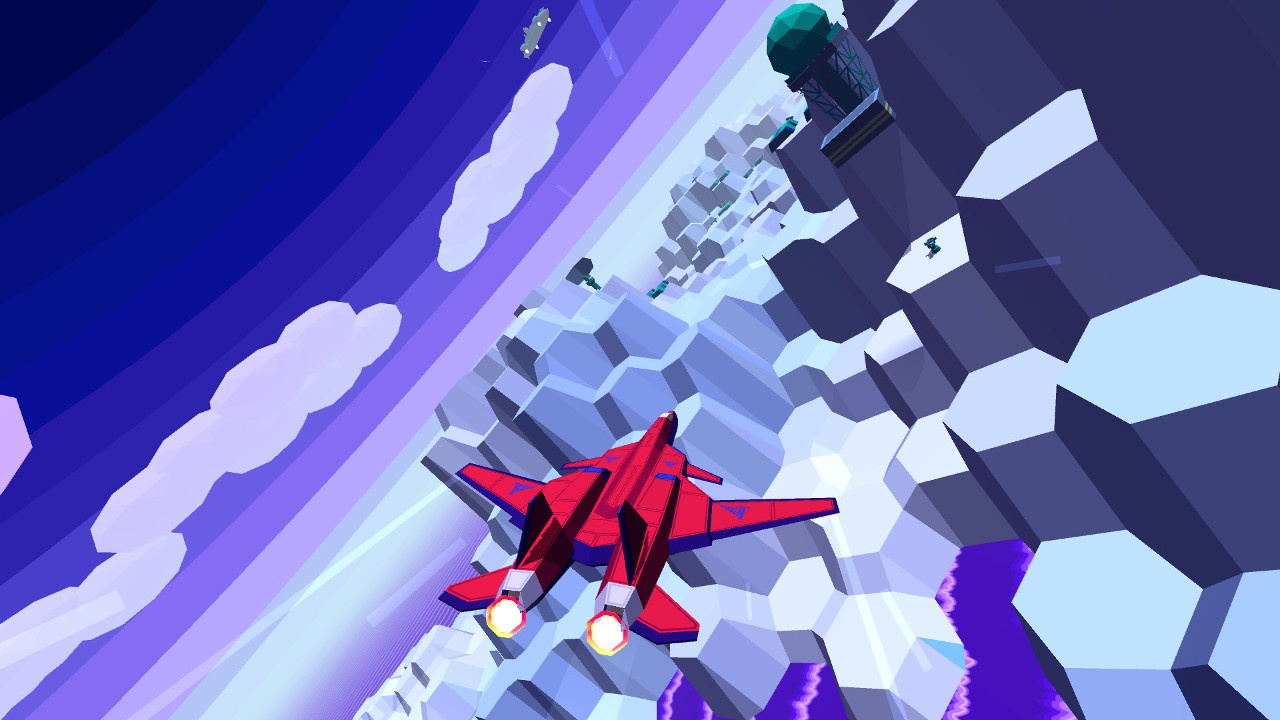 On the Switch, waiting for flight-orientated games to be released has been like waiting for a bus. Wait for twelve months and then a whole fleet of them turn up at once. The latest, in this genre of gaming, to fly its way onto Nintendo’s console is Sky Rogue, a jet fighter combat title that has been developed and published by Fractal Phase.

This action flight simulator comprises of a rogue-like element, with its insta-death mechanics, lose-everything style of gameplay and a bundle of procedurally-generated landscapes. The main bulk of the game sees you flying a variety of random sorties over a twelve day period. With one mission per day, you are tasked with taking down a primary objective, whether it be a fleet of bombers, land installation, tanker or oil rig, to name but a few, before returning to your base to fight another day. However, if you’re feeling brave, each landscape also offers a variety of secondary targets that can be destroyed in order to gain credits. These, in turn, help to make life easier as you progress through the levels with their monetary value being needed should you return to base to re-arm, repair and refuel.

It’s an instantly accessible game, although as the campaign progresses the difficulty level spikes considerably; by day four or five, you’re going to need to be flying by the seat of your pants if you’ve any hope of progressing any further. Based upon an airborne carrier, a similar vessel to the SHIELD Helicarrier from the Marvel’s Avengers series, you outfit your prototype jet fighter with rockets, missiles, guns and flares before embarking on your various missions. Whatever your target may be, the enemy aren’t going to give up without a fight and have a solid defence in the form of Anti-air guns and missiles, armed drones, fighter craft and gunboats; all hell-bent on shooting you out of the sky. Once locked on to your position, any approaching missiles sounds an alarm which requires you to launch a flare to evade the impending attack. However, with only eight flares at your disposal, you soon need to be flying evasive manoeuvres to stand any hope of survival, or just fly the hell in there, destroy your target and fly the hell out again. 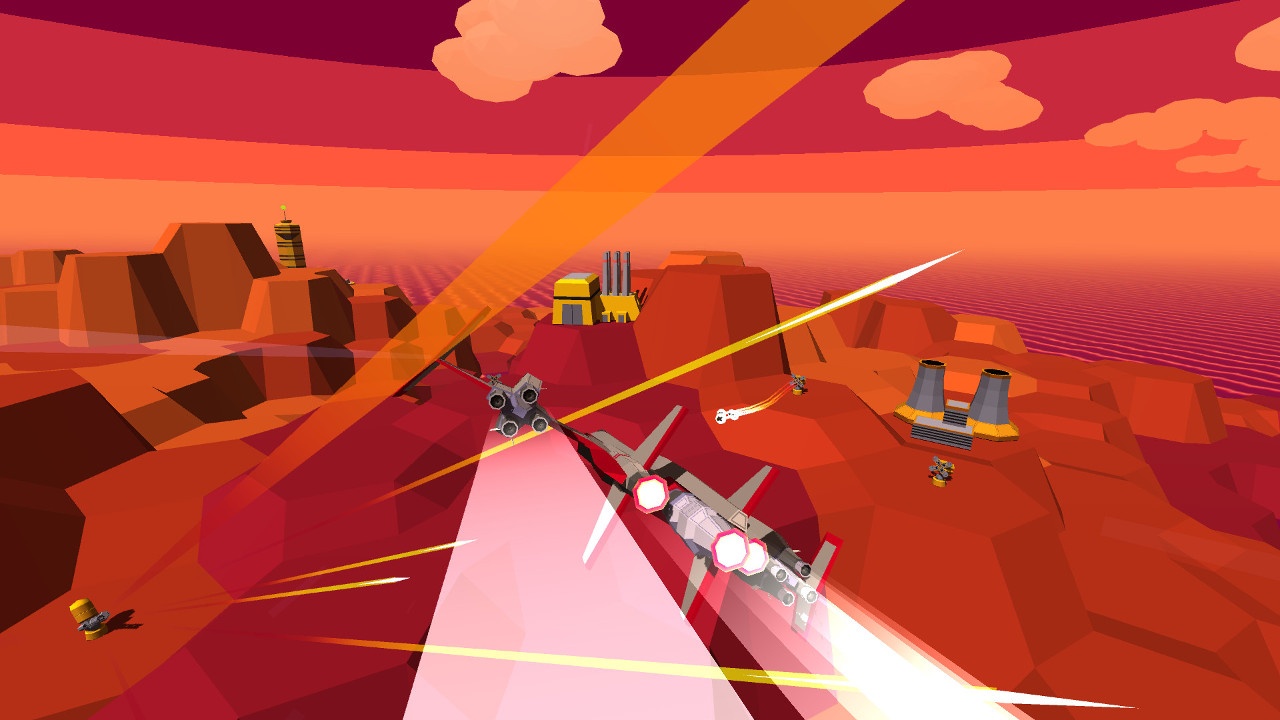 Each successful completion of a mission awards you with Tech Points, or XP, and credits. As previously mentioned, these credits can allow you land on your carrier mid-mission in order to re-outfit your fighter or can be used to purchase further upgrades for your arsenal or aircraft. However, should you die, which you undoubtedly will, any purchased upgrades are lost forever and you have to start again with just your basic equipment. To help even things up a bit though, as you begin to level up, you get to research various weaponry and aircraft which then becomes available to you every time you play. This mechanic introduces a need to play more and more, as the further you level up, the more weapons and aircraft you have at your disposal; thus making you a more powerful ally and more likely to pull off the impossible.

There’s a surprising amount of content with which to research, from various fighters, interceptors and bombers to a whole array of weaponry from cluster bombs, long range missiles and speed boosts. This really adds an element of longevity to the title with its constant upgrading to a more powerful force to be reckoned with; especially when it comes to taking on the end-level boss fight. Each aircraft also comes with a variety of skins with which to personalise your own fleet of aircraft. As well as the campaign mode, Sky Rogue also offers two other variations of its gameplay. Endless mode is as it implies. Set in the same style as the campaign, albeit without any boss fights, this mode runs for infinite amount of time until you are destroyed. The second mode, Free Flight, is a form of practice flight where the game’s opening level is presented to you in an area that is completely devoid of any enemy presence; allowing to fine-tune your flying skills, as well as try different control schemes and views.

Using the conventional control method, as well as pro controller support, offers a very well mapped-out array of flight mechanics. Airspeed is controlled by the shoulder buttons, while pitch and yaw are adjusted with the left thumb-stick. Weapon selection and deployment are mapped to the buttons, as well as flare distribution and target requisition, leaving the right thumb-stick to act a three-hundred and sixty degree viewpoint to give you an all-round vision of the battlefield. However, exclusive to the switch, Sky Rogue also incorporates a motion-control method called DANGER ZONE. By holding a joy-con in each hand, the left one in a horizontal position and the right one, vertically, you can emulate the control scheme of a real jet fighter. Using your left hand, you can adjust your speed by tilting back and forth, whilst your right hand acts as a joystick with pitch, yaw and weapon selection/firing. It all works surprisingly well, if not a little gimmicky, but its execution produces a very smooth operation that is faultless in its mechanics and adds a touch of immersion to the proceedings. Building a Labo-inspired cockpit control would bring a whole new element to this control scheme, making the whole experience an absolute delight to use. 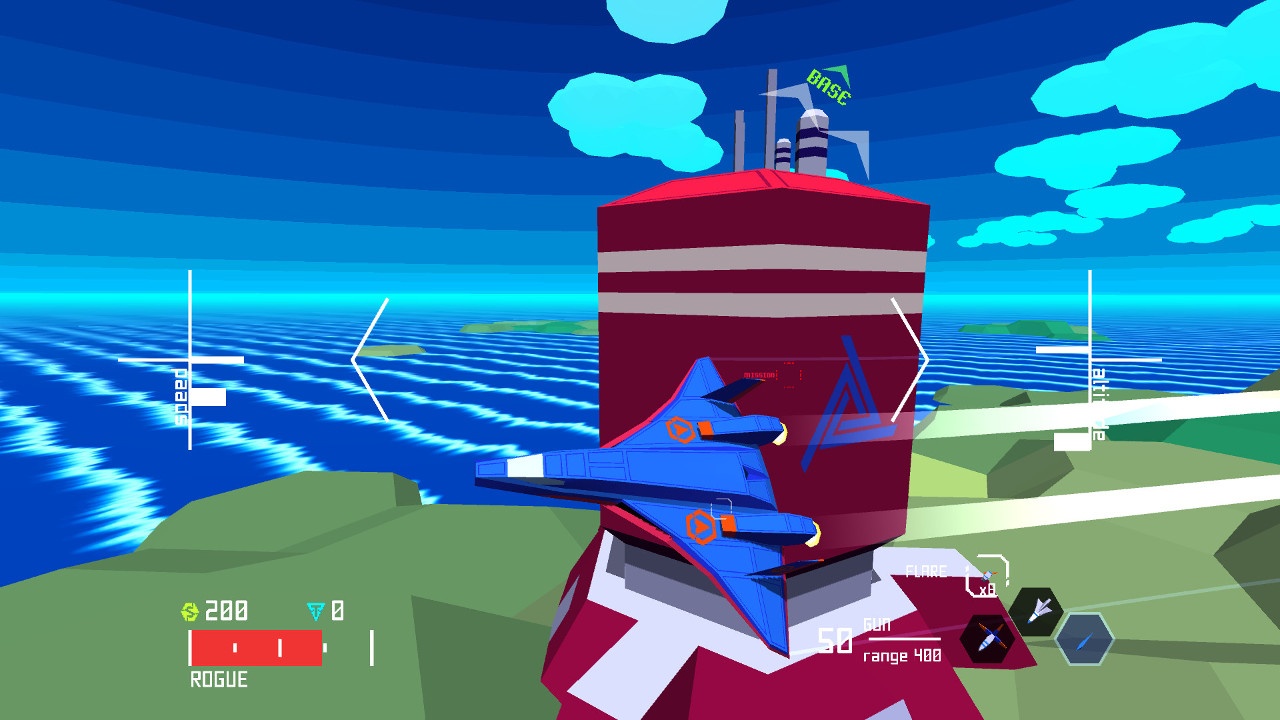 The graphical presentation of Sky Rogue harks back to the good old days of Commodore’s Amiga and Atari’s ST with its use of polygon models. It all looks faultless and runs at a super smooth rate making its flying mechanics a joy to behold. There are also a number of varying viewpoints, from cockpit, chase, tactical and flypast, which offer different perspectives from which to view the aesthetically pleasing displays upon your screen. Its audio qualities are also well presented, with particularly satisfying missile launches, gun-fire, explosions and jet sounds, although I felt its soundtrack was a little hit-and-miss with its sixteen-bit throwbacks that soon grew tiresome. However, for pure nostalgia reasons, it was a nice inclusion. Everything is presented in a very clear and concise fashion, with a bright colour scheme and clever sea-model that makes it easily-distinguishable from the similarly blue sky. It’s all particularly pleasing to the eye that makes target acquisitions particularly easy to distinguish.

One of the best features of the game, is the inclusion of local multiplayer. Played over a split-screen, you and a friend can play through the campaign cooperatively with one Joy-con each. Containing the same rogue-lite elements of the single-player experience, the feeling of urgency is doubled in this mode with the need for both pilots to stay alive in order to continue. You can also incorporate an element of tactical play here, as with two pilots you can share the duties of one concentrating on the primary targets, whilst the other pilot provides air cover. It’s a nice inclusion that certainly adds another level of gameplay to the title. It still runs with the same, smooth performance as the single-player element and adds to the replayability and longevity of the title.

Overall, Sky Rogue is a nice little package. With its sublimely smooth control schemes, pleasing presentation and exciting gameplay, it’s a game that will keep both simulation and arcade junkies very happy indeed. It’s an instantly accessible title and easy to pick-up and play, however, its punishing difficulty level requires a very high level of dexterity. With its mechanic of levelling up though experience and prolonged playing time, it offers a surprisingly addictive quality that keeps bringing you back to further strengthen your ability to fight, with a wider selection of aircraft and a more powerful arsenal. The inclusion of the motion-controlled joy-con flight mechanics is a rather nice touch; the smoothness of its application needs to be experienced and it produces a very satisfying feel. With so many flight-based titles now available on the Nintendo Switch, we’re a very lucky bunch of wannabe pilots and Sky Rogue fits in very nicely in adding to the void which needed to be filled. It’s fun, it’s exciting, it’s exhilarating and, ultimately, it’s a must-buy. Let’s just hope that a bus-driving simulator never materialises, I’d dread to think of how many of those would turn up at the same time!