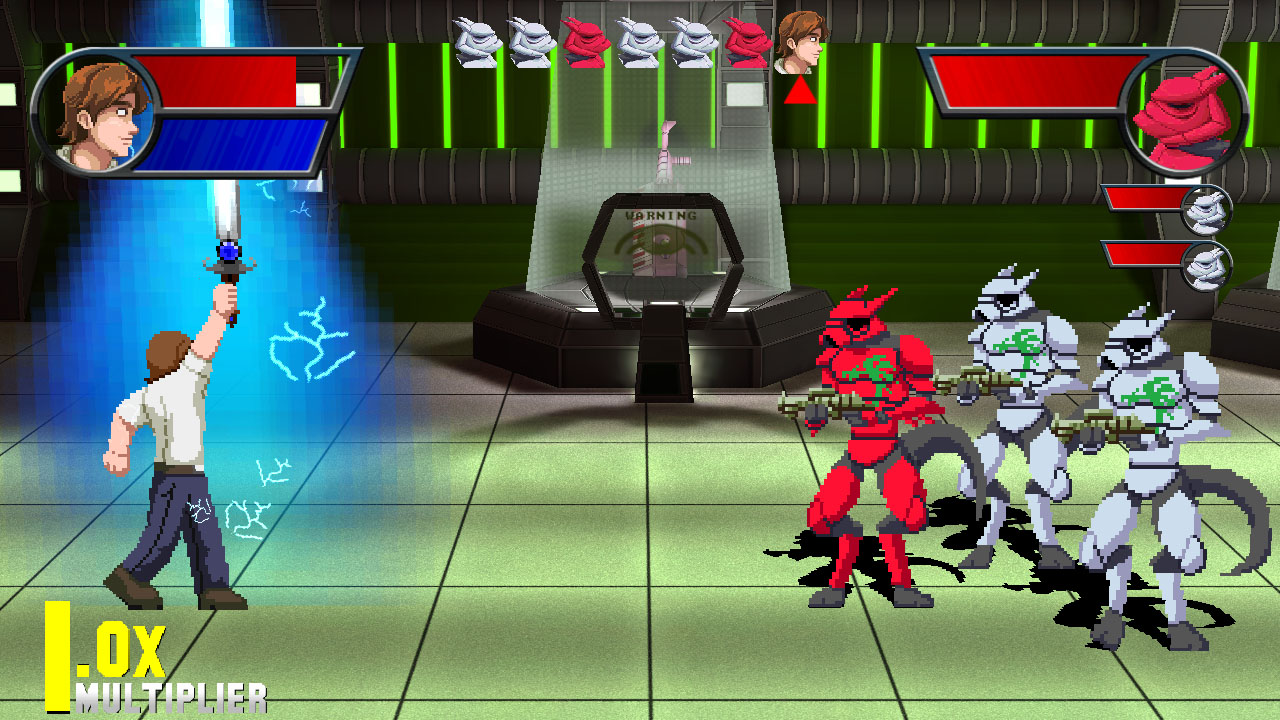 Anyone who was around during the nineteen eighties, or even the nineties, probably has fond memories of lying in bed or slouching on the couch, watching Saturday morning television. With classical cartoon productions of He-Man, Transformers and the Care Bears, to name but a few, it was a good time to be an adolescent. Now you can re-live those memories, or experience the past, with Saturday Morning RPG, a throwback blast-from-the-past role-playing game that takes us back to the future on the Nintendo Switch.

Developed by Mighty Rabbit Studios, with publishing from Limited Run Games, this mad-cap adventure has you following the exploits of Marty, an average schoolboy who, through his dreams, travels in to the realms of Saturday Morning TV in a fantastical land that stretches over five episodes; each one offering an insight into those lazy days of our childhoods. The story follows Marty in his quest to stop Commander Hood and his dastardly plan to marry his schoolboy crush. With help from a strange character, known only as The Wizard, Marty receives a magical note-book, granting him the power to imbue normal everyday items with a magical quality that enables them to be used as some form of weaponry against the Hood organisation and his many cronies.

Each of the episodes have their own main quest and stories, as well as a number of side quests, which all interconnect to follow the main story arc. From rocky mountain roads to snow filled tundra’s and even the local town, each level contains an engaging plot that makes playing through them a very fun experience indeed. Despite its storyline, the main premise in Saturday Morning RPG, is about having fun, and lots of it. The amount of humour throughout is cleverly executed, containing many references to the eighties and nineties that either amaze, or simply have you laughing out loud at their cheesy representations. 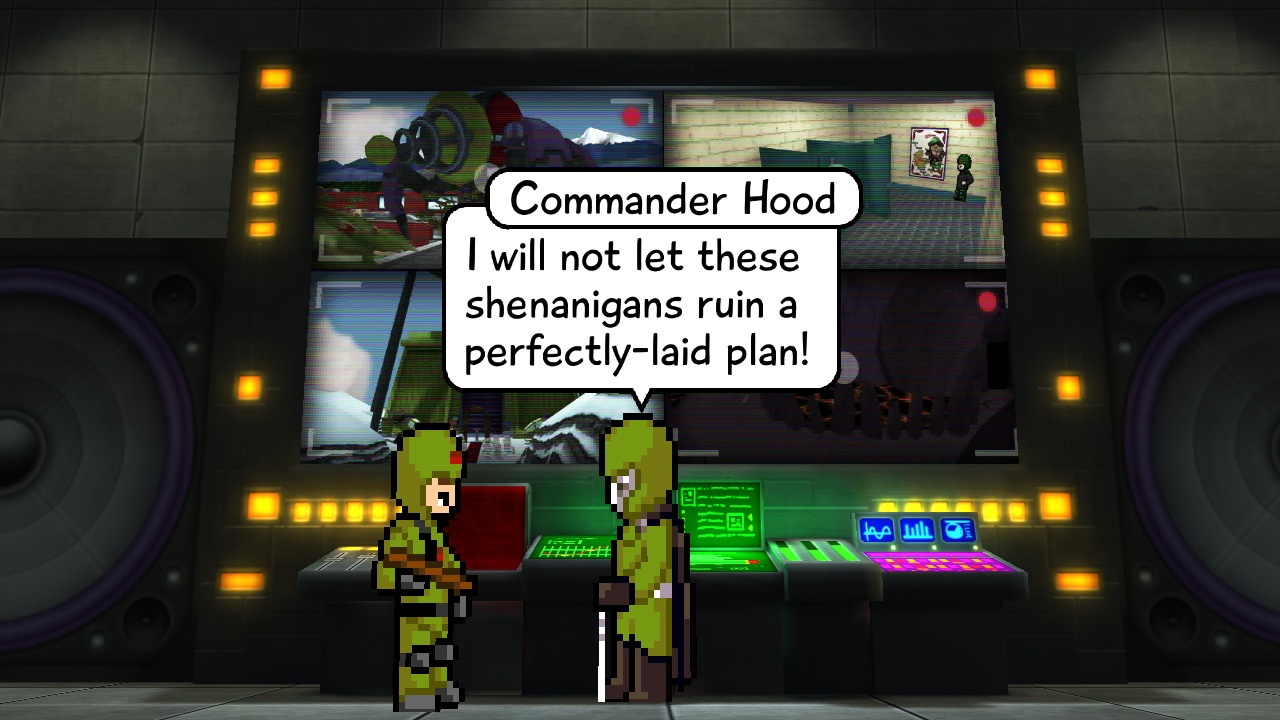 There is plenty of opportunity for exploration and combat, as all good role-players should. With multiple branches of investigation, as well the side quests which open up new areas to explore, this isn’t a game of simple linearity. The combat is turn-based, with light inspirations from the Japanese style of play. However, its execution is simply sublime and offers a refreshing take on its simplistic formula. Each bout presents you with three options, a multiplier boost that strengthens your attacks, a magical attack using acquired items and a normal bare-knuckled variety. These primary options open a secondary menu which offers further selections. These can take the form of mini-game styles of execution in boosting your attributes or launching various attacks, or by simply creating an automatic boost or attack pattern. Each of the options have a limited supply, based on either your magical power gauge, or by the total of attacks available for you to use.

This combat style presents a very simple-to-use mechanic and are often hilarious in their executions. It all begins with your note-book presenting various stickers that boost your attributes, either defensively or offensively that you need to rub like a scratch-card, or a scratch-and-sniff style of picture. The battle then begins and, depending on your selection, you begin to utilise attacks such as a moonwalk punch, compact disc fling, basketball throw and Transformer attack; and these are only but a few of the samples that can be collected throughout the game. Whatever attack you use, each of them are suitably hilarious in their executions, making the whole feel of combat a very, enjoyable experience. Each successful bout awards you with experience points and coins that upgrade your stats and present you with opportunities to purchase new attacks from the vending machines that can be found on each level.

Although the main quest is the overriding journey of your path, a series of side quests are also available that contain more than your usual expectations of such tasks. These extra storylines don’t contain a simple find and fetch mechanic, but actually uncover supporting characters, extra items and the aforementioned, vending machines by taking on bounties, exploring caves or clearing blockages, as well as a sprinkling of other options. However, the decisions you make in how complete your quests carry over to other episodes; although they don’t affect the overall outcome of the plots and themes associated with the main story. To get the most out of the game, it’s highly recommended that you try and experience everything it has to offer, after all, there are so many hilarious references throughout that finding them all soon becomes an integral part of the gameplay. 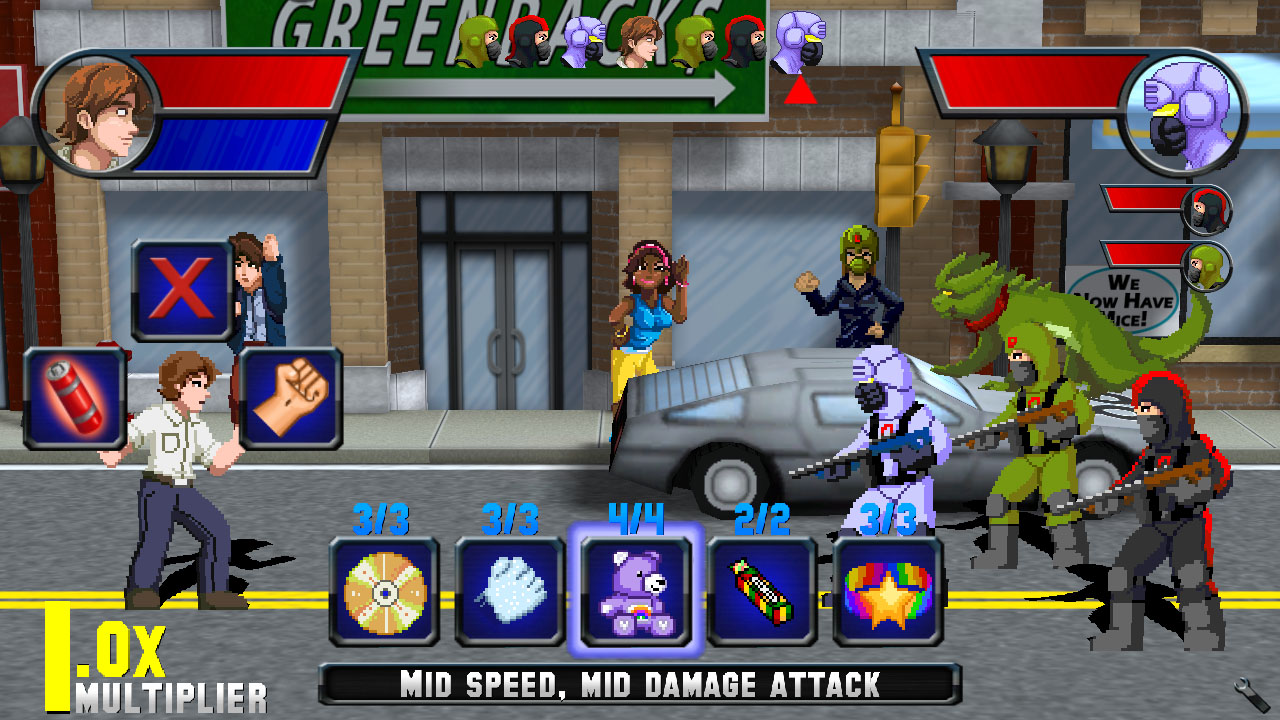 As well as the main offering of a campaign, Saturday Morning RPG also offers two other game modes with which to experience its delights. These come in the form of Endless mode and Arena mode. The first of these pits the player against endless waves of enemies, the variety of which depend on the selected episode. The latter option puts you in an arena where you have to fight the game’s various boss battles. Both these modes offer the title a form of longevity, especially if you enjoy the humour associated with the battle sequences. Upon the Switch, the game takes full advantage of both its touchscreen and conventional control schemes, as well as pro controller support. Its mechanics, in whatever scheme you opt to play with, are expertly executed, offering an accurate level of control in both navigation and combat.

Graphically, Saturday Morning RPG offers a very simplistic look in its aesthetics. Blending 8-bit pixels with rendered backgrounds offers quite a unique visual that is both fun to look at and interesting to explore. The soundtrack follows the theme of the game, with its throwback to the eighties era; offering another aspect of the fun that this game produces. The length of this title isn’t particularly long, although it is adequate in providing a suitable form of entertainment. Despite this, it’s a title that sits superbly on the switch, especially in its mobile capacity.

Overall, Saturday Morning RPG is a delightful experience that contains many unique and comical elements that simply make it a joy to play. All of its components, from combat, dialogue and quests are fully engaging and its simplicity in all of its mechanics make it a title that both young and old can enjoy; both for various reasons that they will discover for themselves. Although quite short in length, its pricing reflects this, but its abundance of fun make this a worthwhile purchase. It’s full utilisation of the switch’s control methods, as well as it’s suitability to a casual, mobile style of game, makes it suitably at home upon Nintendo’s console; thus making this version of the game, probably the most playable version to date.