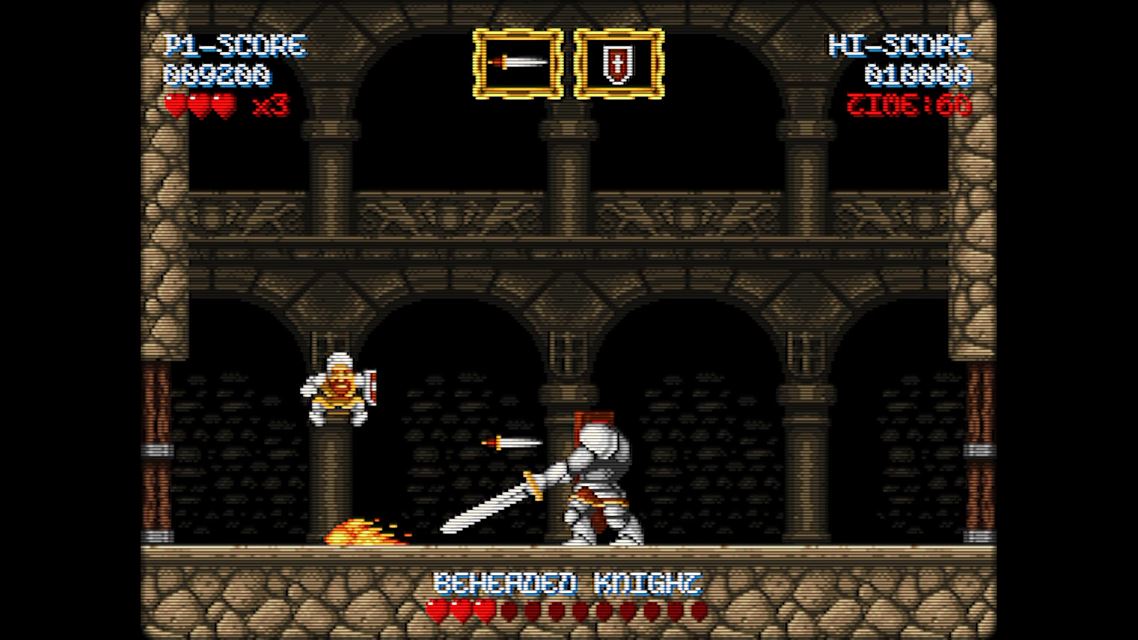 A few weeks ago I started writing a list of modern indie games and the equivalent retro counterparts that inspired them. I paired Shovel Knight with Super Mario 3, The Binding of Isaac with The Legend of Zelda, Axiom Verge with Metroid, Stardew Valley with Harvest Moon etc. etc. You get the idea. Well, included on that list was a title named ‘Cast of the Seven Godsends (Redux)’. This is a fun action platformer released in 2015 by Raven Travel Studios. The retro title I paired it with was Capcom’s sensational arcade classic ‘Ghouls and Ghosts’.

Why bring this up? Well, because just like Cast of the Seven Godsends, Cursed Castilla is also a modern indie that was heavily inspired by ‘Ghouls and Ghosts’. From the game’s look, theme, gameplay and controls, Cursed Castilla seems to be acting as an extremely competent clone / spiritual successor to ‘Ghouls and Ghosts’. It’s also just as difficult (if not harder).

Many reviewers have compared ‘Cursed Castilla’ to Capcom’s previous title in the series ‘Ghosts and Goblins’, however I think that this does Cursed Castilla a disservice. The controls in CC are much closer to Capcom’s superior sequel with more fluid gameplay, a larger arsenal of power ups, the ability to shoot up and down in addition to just the sides, and some of the stages are quite similar too. However, before getting too deep into the gameplay let’s quickly go over the plot.

Set in 11th century Spain, a witch by the name of Moura is mourning the death of her fallen lover. An ancient demon takes advantage and uses Moura’s tears of sorrow to open a portal to Hades. With the portal open, demons have infested the lands and are raising hell. Enter the hero of the hour, Don Ramiro (a possible nod to Doom’s John Romero?), a member of a small band of knights assembled by King Alphonse VI for a special quest. To bring an end to the chaos and restore peace.

Your quest is split into 8 stages which range from a village, a castle, a swamp, an enchanted forest, and (if you can make it far enough) eventually into hell itself. Each stage features a number of platforming segments in addition to two bosses (a mid level boss and an end of level boss). Speaking of bosses, Cursed Castilla boasts an impressive 19 boss fight over all, many of which are based on European mythology and are all pretty stunning. 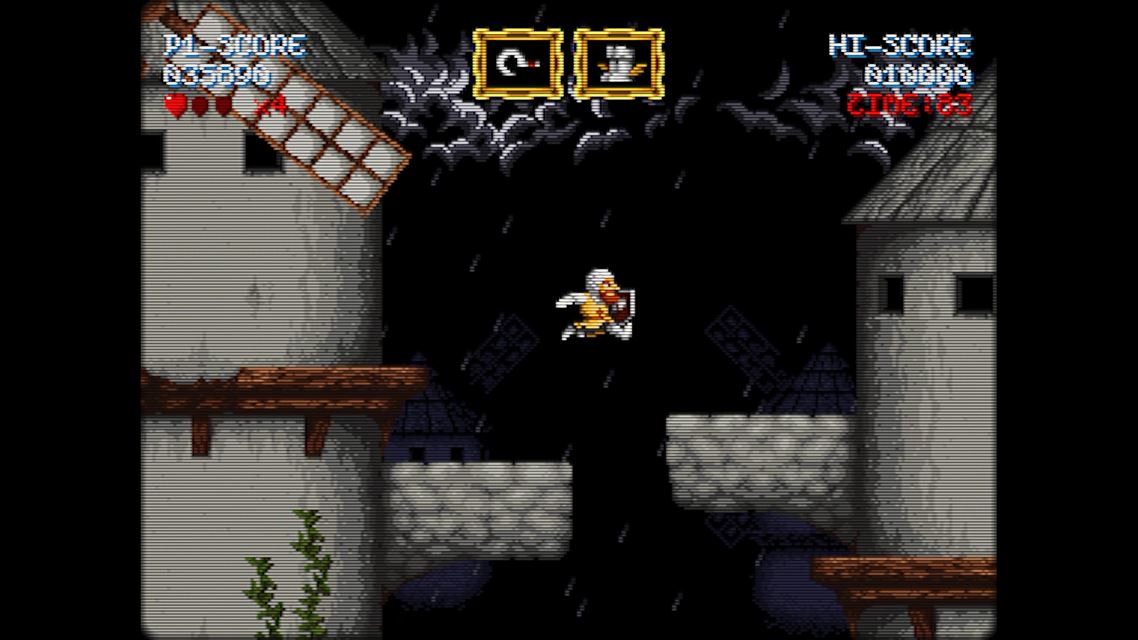 The controls are simple. The D-pad is used for movement and you only need to use two face buttons to jump and shoot, which is very straight forward. The buttons you use can be switched in the options menu in order for you to play with whichever configuration you feel comfortable with. As well as running you can crouch and shoot in mid air. Like Ghouls n’ Ghosts, your jumps have fixed trajectories and mid air control is quiet limited. Veterans of classic games should feel comfortable enough with this, however newer gamers might find this a bit restrictive.

As you plough through the stages defeating all manner of mythical monsters, you’ll encounter chests from time to time that offer everything from treasure (which helps to boost your score) to power ups such as weapons and passive items. You can only equip one weapon at a time, however the power up visibly rotates through all of the ones that are available giving you the choice to use whichever one you think is best in the circumstances. The weapons are always projectile based and offer different rates of fire, damage output, direction of attack etc. Since each weapon has different attributes it pays to experiment a bit with them and work out which ones you prefer during particular stages and bosses. You keep whichever weapon you have until you either find another power up to replace it, or if you die you’ll resort to the default throwing swords. It’s not uncommon to find yourself playing extra carefully when you’re holding onto a weapon that you like and you can’t risk losing it.

As well as having a single slot for weapons, you also have a slot for a passive item. These include shields that allow you to take an extra point of damage, boots that allow you to double jump, or a fairy that provides extra fire power, amongst other items.

Presentation wise, Cursed Castilla is a decent looking game, although it does have a few flaws. The game is presented in a true arcade style and begins with a mock arcade boot up sequence which is pretty cute. By default it’s presented in a 4:3 aspect ratio with an artistic border and fake scan lines. This (at least on the Vita version which is the one I reviewed) is the sharpest looking way to play it. There are some alternative setting which makes the display area larger, and it can even be stretched across the full width of the Vita’s screen. However, using any other setting than the small default display results in the edges of the sprites softening. As a result everything will end up looking a tad blurry. Personally I would have preferred it if the developers had stuck to the pixel art / retro arcade style, but hadn’t felt the need to keep the experience so authentic as to not build the game with a native 16:9 aspect ratio.

The graphics have a very appealing gothic look with great uses of shading and darkness in the background to create a foreboding atmosphere. Ghouls and Ghosts often used dark / pitch black backgrounds, however Cursed Castilla isn’t afraid to combine the dark backgrounds with some solid looking scenery and architecture. One criticism I do have is that the level layouts feature a lot of straight edges and tile based designs, whereas Ghouls and Ghosts was a lot more hilly with free flowing terrain. I think I prefer the Ghouls and Ghosts approach to level design in this respect, but that’s just personal taste.

The music is really good. It’s all chip tune music as you would expect from this style of game, but the melodies all sound a lot grander than their G&G equivalents. Rather than generic spooky music, there are a lot more oldie European and folk music vibes infused throughout the soundtrack. The only exception being during the finale where the music turns very dark and is reminiscent to something you’d expect to hear in a Splatterhouse game.

Just like any title in the G&G series, Cursed Castilla is notoriously difficult. I tried playing this while my 1 year old was playing with his toys and I didn’t stand a chance. This isn’t something you can play casually. To get the most out of it requires full concentration, patients, a lot of practice and experimentation. As such this may not be the best title to buy on the Vita, unless you have a lot of experience and have become an expert at it. I think new players may be better off with a home console or PC version where you can get comfortable and dig in for a long gaming session. It’s probably not the best title to play on the go with a lot of distractions around you. 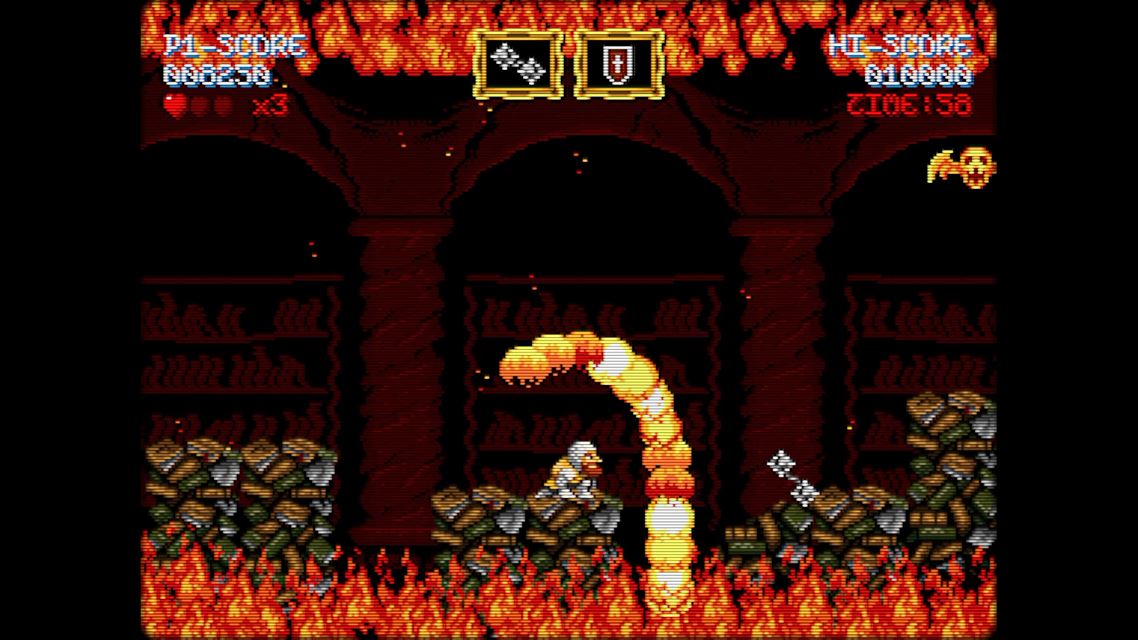 There is only one game mode and no options as far as the level of difficulty goes, however that doesn’t mean to say that this game doesn’t offer a ton of replay value. Within Cursed Castilla expect in encounter a lot of secrets, side quests, Easter eggs and (if you are good enough) there are multiple endings. If you are into speed running then there is an option to turn on an on screen timer (something I wish more games had).

Spoiler Warning: The following two paragraphs contain details of the later story and how to achieve the various endings. If you wish to discover these for yourself then please skip to the closing paragraph.

The various endings and criteria for achieving them is the one thing that really makes ‘Cursed Castilla’ stand out amongst its peers. The original G&G games had unlimited continues, as does ‘Cursed Castilla’, however should you lose too many the game will warn you that the continuing will cause your character to “lose their soul?” This will doom your character and ensure you one of the bad endings as the grim reaper will end your run just before the final cut scene. This is ok if you want to keep practicing and trying the later levels, but should you want to complete it properly you’ll have to bring your A game and get to the end with as fewer deaths as possible.

Also, the final stage is locked behind a sealed door which requires five of Moura’s tears which are hidden throughout the game. Again, missing any of these will doom your run and not allow you to reach the final conclusion. Should you actually be good enough to beat the game fully and get the good ending, you’ll still receive a progress report with several criteria on it such as Easter eggs and secrets that you may have missed. Only by achieving everything on the list in a single perfect run will you get the best ending. As such this game will require multiple tries by even the most hardcore of retro enthusiasts.

When I started ‘Cursed Castilla’ my first thoughts were ‘it’s ok, but it’s not Ghouls and Ghosts’. Then after about half an hour I thought, ‘actually, this game isn’t too bad, although I think I still prefer Cast of the Seven Godsends’. Then after a few hours began to think ‘this game is excellent’ and ‘why didn’t I buy this earlier?’ Without a doubt, Cursed Castilla grew on me over time and I really appreciate the effort that was put in to add replay value. I think it’s well worth the retail price, however I would recommend buying it on a home system rather than a portable one. I experienced no technical problems with the Vita version at all, however I feel it’s a game that’s better suited for a quite room where you can really concentrate.