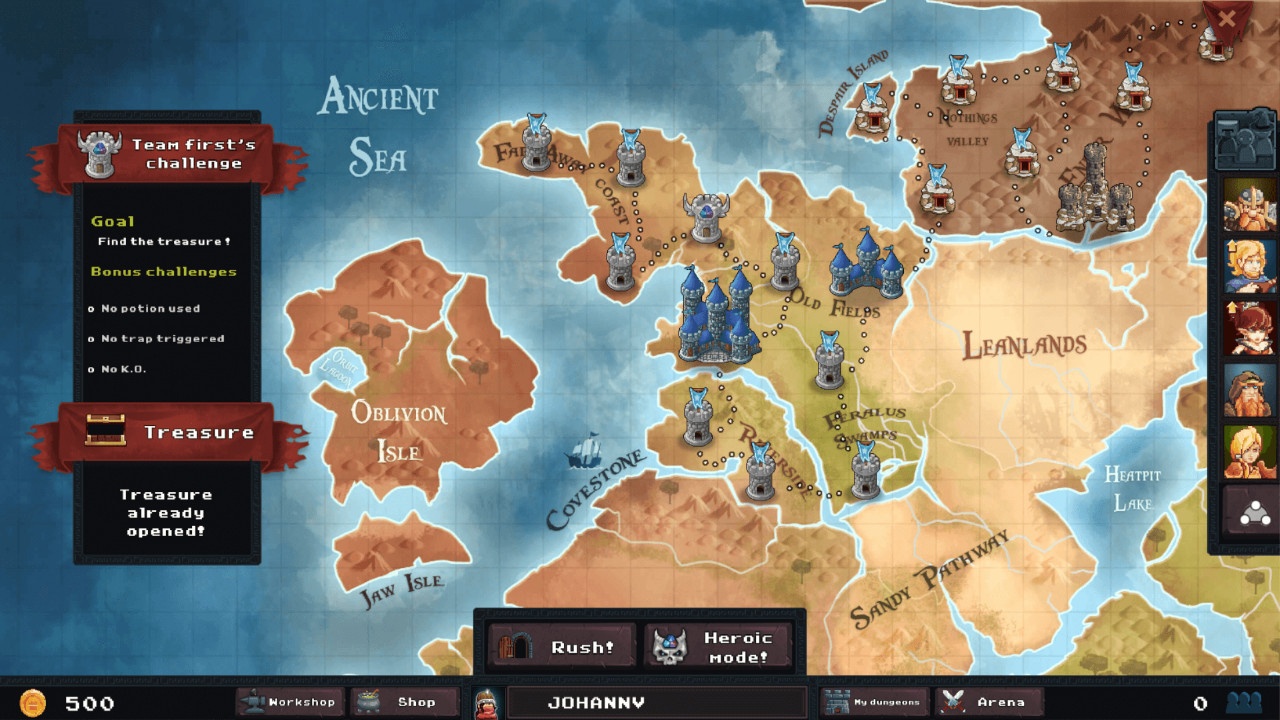 When it comes to tales of folklore and yore, it usually boils down to a setting of good vs bad. This is particularly true when it comes to Dungeon Rushers on the Nintendo Switch; but not necessarily in a way that you might immediately think. Developed by Goblinz Studio and published by Plug In Digital, this dungeon roaming/tactical RPG contains some truly epic moments in terms of its mechanics and gameplay. However, it’s also missing a few components that detract from what is being offered, but I’ll get to that after we discuss everything that is good about this title.

Originally released on the mobile and steam platforms, this port to the Nintendo Switch retains the same mechanics of playability from its original iterations in terms of its single-player campaign. Set during the medieval times of knights and sorcerers, the game follows the parodic adventures of Elian, a young boy who dreams of adventure and fortune; as well as an escape from his nine-to-five job in cleaning toilets. In order to achieve this, he sets off to explore the vast dungeons that lay throughout the land. Armed with his toilet brush, he delves into the depths of the monster-infested labyrinths in his own personal quest for glory.

Dungeon Rushers can be split into two categories, namely exploration and combat, but with a sprinkling of role-playing elements and tactical execution. The campaign tells a story of sorts, although it is more of a parody of its genre and one that works surprisingly well with some well-crafted humour. Each of the dungeons, sixty in all, are procedurally-generated and are explored via a series of rooms and corridors on a grid whose locations are revealed one square at a time. This adds an element of surprise to the gameplay, as well as a form of longevity and replayability with its generational mechanics. 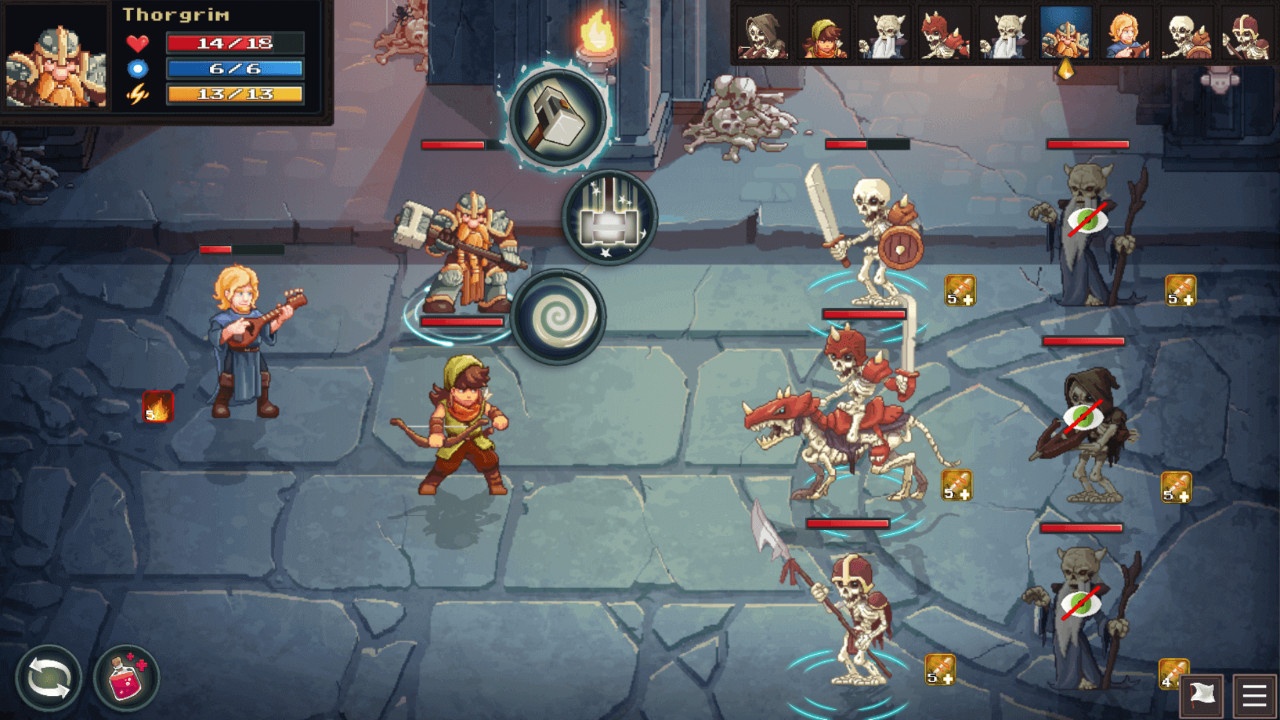 Each of the dungeons, or temples later in the game, possess any number of surprises that include monsters, traps and treasures. By moving one square at a time, you begin to uncover the layout of the dungeons as you seek to find the chest that is housed within each one, thus building towards your fortune. As you progress on your journey, you come across various characters, up to ten, who join you on your adventure. From this group of fellow travellers, you can form a party of five with whom to send into the dungeons. As well as helping with combat, these characters also possess a variety of abilities that range from revealing a set number squares within your vicinity, disarming traps and highlighting rooms that contain treasures.

The combat element of the gameplay works on a turn-based mechanic, with your group of explorers positioned on a two-tier system; three on a front row and two in support at the rear. As you uncover a location inhabited with enemies, the viewpoint of the game changes to inside the dungeon as the two parties face off against each other. As well as melee and ranged combat with swords, axes, hammers and bows, some characters also possess magical qualities that can heal and bolster your party, as well as attack; the same can also implemented within the enemy parties too. The order of combatants turns are displayed on-screen, as each one takes turns in activating one of three options available to them.

The tactical element of the gameplay comes into effect here, as you determine, based on character order and enemy strengths, which attack to utilise to deal out the most effective damage and way of dealing with the enemy formations. With a good strategy in place, it is possible to dispose of any enemy incursions without taking any damage yourself; although an increase in the difficulty spikes can make this a more daunting task the further you progress. As well as the combat and exploration elements, each dungeon also contains a number of optional requirements that can be played towards activating bonuses and unlocking the heroic mode for each of the dungeons. 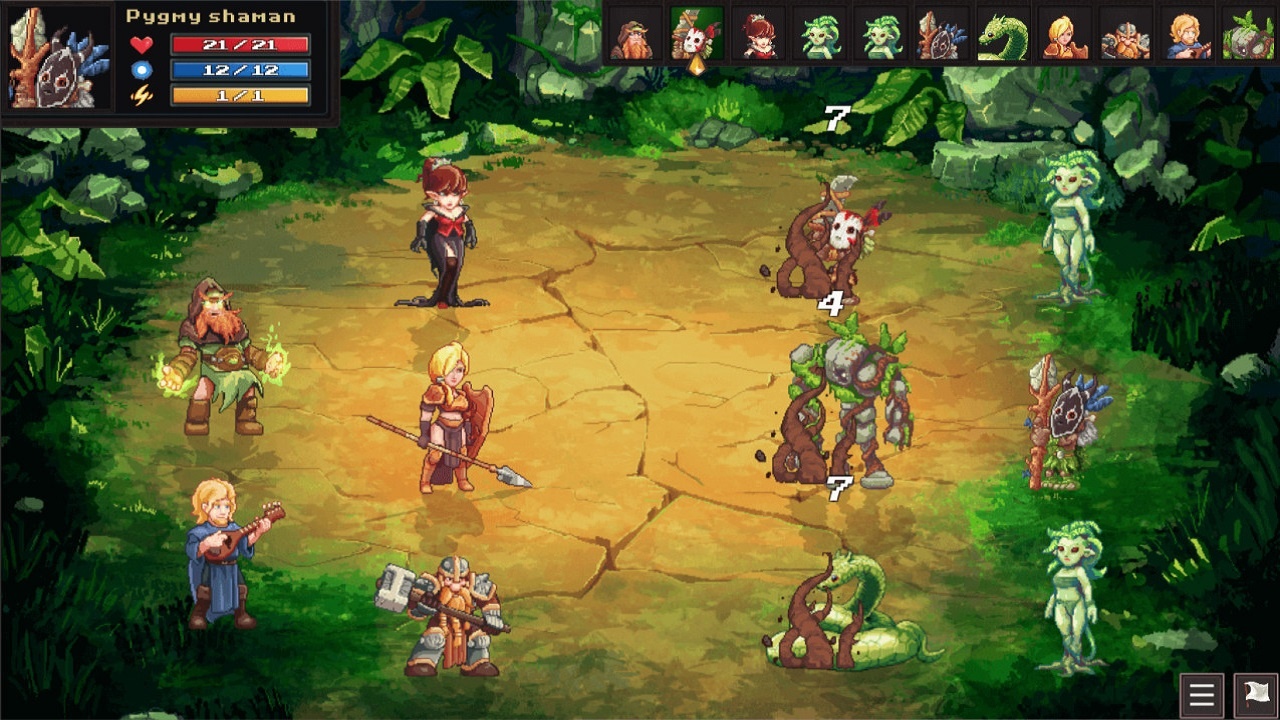 This extra mode allows you to re-enter previously played dungeons, but with extra elements to make your journey more hazardous. As well as a new layout, these dungeons contain more enemies and take away your ability to heal through potions, as well as requiring you to find a key in order to unlock more lucrative, treasure chests. This in turn leads to more money and components for crafting. With these you can buy items from a store or craft new apparel to further bolster your teams’ strengths and capabilities. Experience points can also be garnered that further enhance abilities and attacks.

The further you progress, the more complex the dungeons become, with larger scales, more powerful enemies and a generous sprinkling of traps. This leads to a difficulty spike that forces you to grind through previously conquered dungeons in order to reach a level that strengthens your team in order to take on the more difficult dungeons. Although repetitive in nature, the procedurally-generated dungeons and rewards that can be gained do make this a worthwhile exercise.

Overall, Dungeon Rushers is a lot of fun to play and contains that magical ingredient that brings you back time-after-time. It’s instantly accessible gameplay and easy-to-play mechanics makes it ideal for both casual and more hardened players; boasting around fifteen to twenty hours of play time. However, despite the game providing an enjoyable and addictive experience, it also contains a glaring omission from its previous iterations that severely hampers the overall game; although that largely depends on whether you have played it before. On mobile platforms, Dungeon Rushers contains an online element that contains the ability to make your own dungeons and explore other user-generated labyrinths. On the Switch, unfortunately, this option is missing from the game. As a reviewer, I have to score this game based on the merits that is possesses now, which I will, but I can’t help but add that if this version of the game had retained its online capabilities, it would easily have bolstered its score by at least one or two extra marks. Despite this, I can’t reiterate enough just how much fun this game is. It has a decent challenge, contains a solid tactical element and offers a good deal of depth in its various mechanics. This is everything that is good about the game. What is bad though, is that by not incorporating its online element it has severely reduced the longevity of the title and stopped it from becoming an epic game.