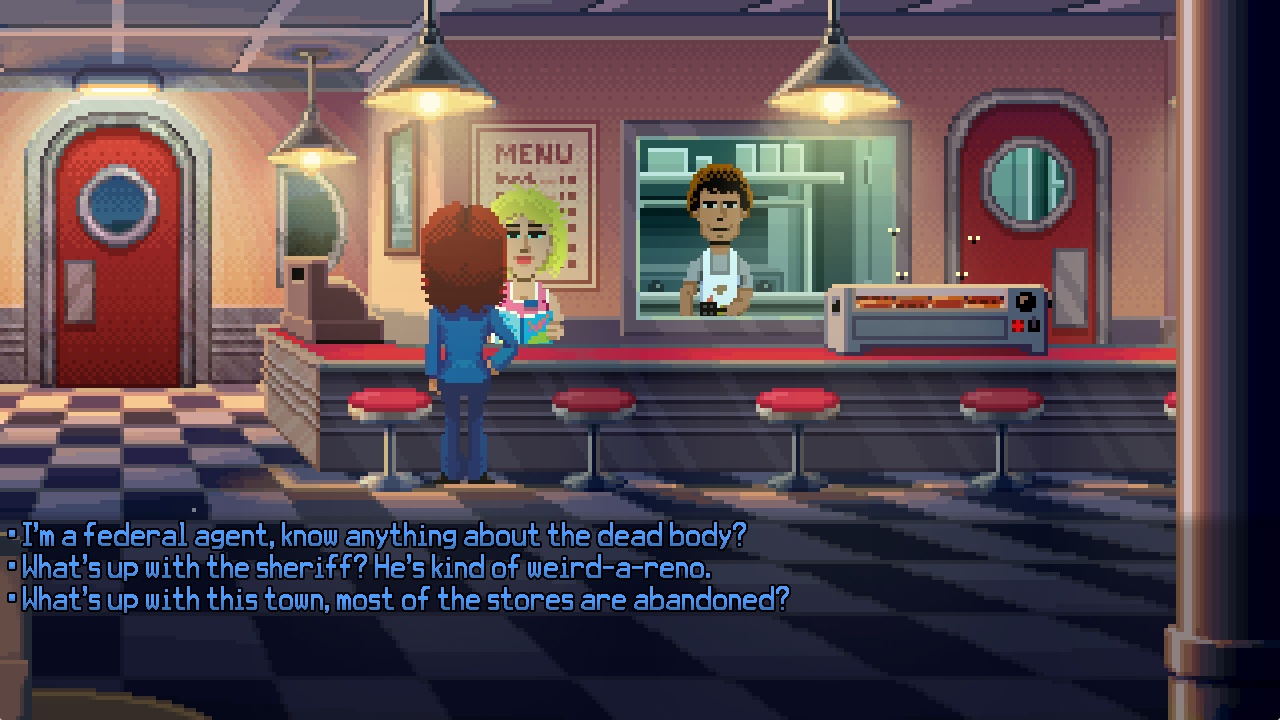 It’s always wonderful to find out that game developers from the days gone by are still working. Lucasarts point and click adventures were some of my favorites, and it saddens me that Lucasarts games nowadays just mean “Star Wars.” It was cool that several of the creators went on to make Humongous Games, but even those are bygones at this point. So when it came out that two of the granddaddies of the genre, Ron Gilbert and Gary Winnick, were making a new adventure, I salivated at the chance to give it a run. And the creation, Thimbleweed Park, is everything I could have wanted and so, so much more.

Thimbleweed Park is the tale of two FBI Agents, Ray and Reyes (oh yes, that’s intentional) who are visiting the sleepy town of Thimbleweed Park to investigate a murder. Why are two high profile FBI agents looking into the death of someone in a backwater town that has maybe 80 people in it? That’s not important, or it is, who’s to say? In any case, the two agents work in tandem with each other and a whole rogue’s gallery of witnesses/suspects in order to find out what brought about the death of Chuck, who is the corpse in question. This quest takes you down an incredibly bizarre and intricate road that leads to some really messed up scenarios and questioning, ultimately making this one of the better adventure games that I’ve played so far and I’m incredibly hesitant to spoil anything. If you can, play this totally blind and avoid walkthroughs and information about the game.

Out the gate, the design and presentation of Thimbleweed Park are a time capsule of love that Gilbert and Winnick (and everyone at Terrible Toybox) have carefully crafted. The interface is the tried and true series of verbs that you can click on, followed by items that you then click them with. You’ll get different reactions from looking at, pulling, talking to and picking up the exact same items. Usually there’s generic dialogue for things that simply don’t work (talk to log, push clown, etc.) but you’ll get the occasional hilarious one off when things really don’t make sense. The crosshairs float across the screen to indicate where you’re clicking, and the developers had a relatively novel idea for how to deal with the Switch in docked mode. By utilizing the L and R buttons, the cursor will flick onto items that you can interact with as long as the cursor is somewhat near. No just hammering buttons to get the solutions, but it does still help. And the control buttons on the left JoyCon will quickly flit through the different actions, speeding up the process overall. I gotta say, this is still something that feels best on a PC, but this Switch port has some good ideas and love in it. 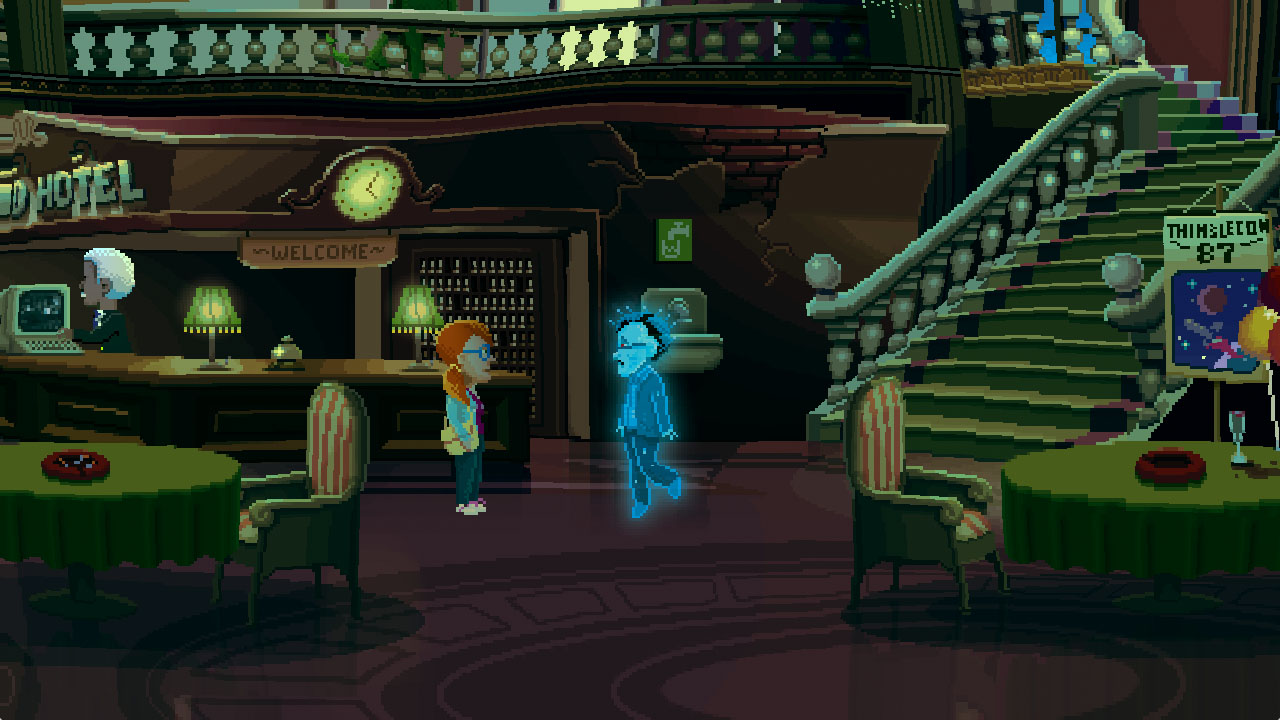 Graphically, you could not ask for more authentic design to the call back of the gaming heydays (you literally have the godfathers working on this game). Everything from the thin, pixel-y characters to the colorful, blocky text that appears overhead when people talk is such a nostalgia trip that I want to go to the junkyard and find a 386 so I can play the original games in their classic senses. But there’s also a good modern sense baked into the decisions of aesthetics. That is, even though things are meant to be nice and square, higher pixel density was utilized to bring even more color, depth and detail than was available in the years that Maniac Mansion was birthed. Think more Day of the Tentacle than Zak McKracken. In any case, it’s a treat to see this game, and it’s one of those great encounters where even watching someone else play it is still enjoyment unto itself, especially with the voice acting.

Ah, voice packs. That was something that came along later in the land of point and click adventures, and I still remember balking at the idea that my 20 MB game would be inflated to something like 150 MB for voices. “I don’t need to listen to the game, I can read!” I used to think. But Thimbleweed Park should be listened to, and listen to ALL the dialogue exchanges, because the bone dry humor of it all is so nuanced and witty that it would be shame to not enjoy the speech that each character has ready for the most innocuous of questioning. From the very first encounter with the Pigeon Brothers (who are actually sisters) to the grating, exasperated diatribes of Ransome the Clown, every moment is perfectly captures and delivered in a way that makes this game something to revisit time after time. There’s only one ending, and you learn very early that this isn’t any Broken Mirror expedition: the players aren’t going to die, and you aren’t going to end up with a dead end because you did something in the wrong order. At least, that’s what the game told me. 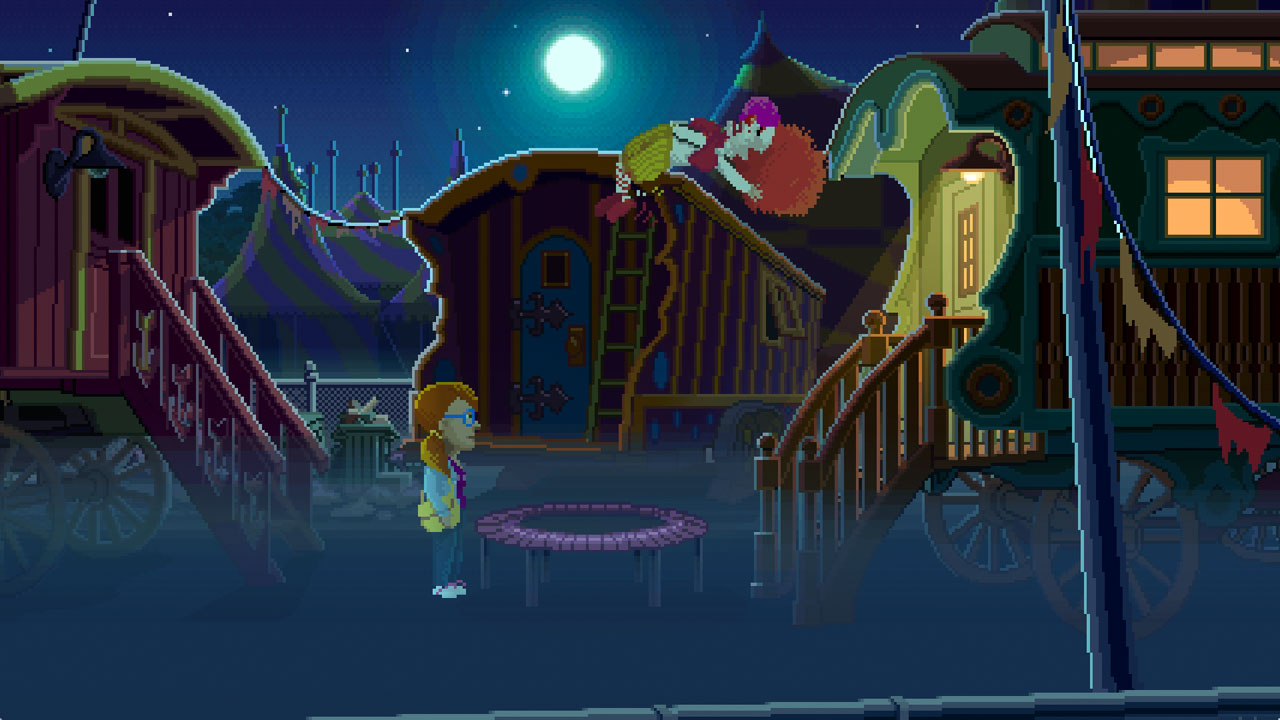 And that brings us to the most important part of Thimbleweed Park: the game itself and it’s existential, surreal humor. Thimbleweed Park feels like the best episode of Twin Peaks that I never saw because David Lynch didn’t get it. From the very drop, it feels like Thimbleweed Park is parodying itself but both aware and unaware of the joke at the same time. You’ll fly between moments of serious concentration and investigation and then suddenly you’ll have two ghosts arguing about who was worse when they were alive. Thimbleweed Park utilizes the ever-important character switching system, something that I longed for since Maniac Mansion, to give you multiple avenues for how the game can and should proceed and create tons of 4th wall breaking, unapologetically expositional interactions between the game, the player and everything in between. It’s utterly fascinating, and you would take hours, many hours, to discover all the dialogue trees naturally while still also trying to finish the game.

Thimbleweed Park may play best on the PC, but I can’t deny that the Switch’s mobile abilities, combined with the touchscreen play (which is really quite good) make this game work on every level for the console player. If you have any love in your heart for the golden age of point and click adventures, and prefer a heaping dash of comedy in with your morning black coffee, then you simply must journey down this crazed and beaten path to discover what is the secret of Thimbleweed Park.