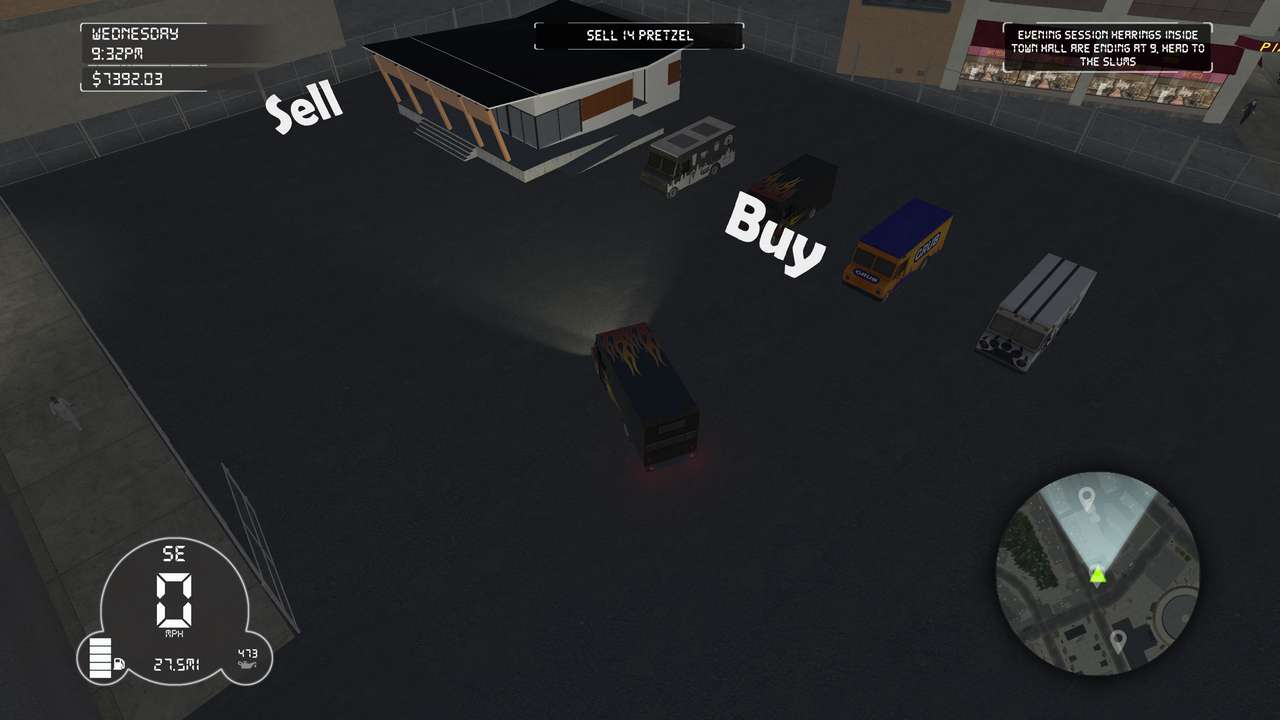 When it comes to playing video games, I have to admit to rather being a fan of quite of few genres. Depending on my mood, I enjoy playing rpg’s, shooters, puzzlers and tactical games. However, I’m also quite partial to simulations too, whether it be driving a formula one car, captaining a submarine or delivering sandwiches. I know, it’s not quite in the same league as piloting an F-18 or Typhoon Eurofighter, but heck, it’s a simulation, so I thought I’d just roll with it. So, how does Lunch Truck Tycoon 2 fare on the Playstation 4? Does it butter your bread, or is it all just rather a sandwich short of a picnic?

Developed and published by Diggidy.net, this title simulates the career of driving a food delivery van around Luncher Island in your quest to become the grandmaster of lunchtime meals. However, this isn’t simply a case of driving around and making deliveries, as there are several components that make up the gameplay to Lunch Truck Tycoon 2, ranging from competitions, missions and economy balancing; all over six distinct districts that comprise the island where you work.

In order to be successful, it is important to take into account the level of your scoring and sales. This can be achieved by fine-tuning your menu in pricing and variation of fine delicacies on offer. By making sales, you increase your score as well as make money. However, should your prices be too high, then customers won’t buy and your score level will be penalised. It sounds simple enough, but you also need to take into consideration a number of elements that can impact how you run your business. Stock taking is just as important as selling, after all, without any products to sell you can’t make money. 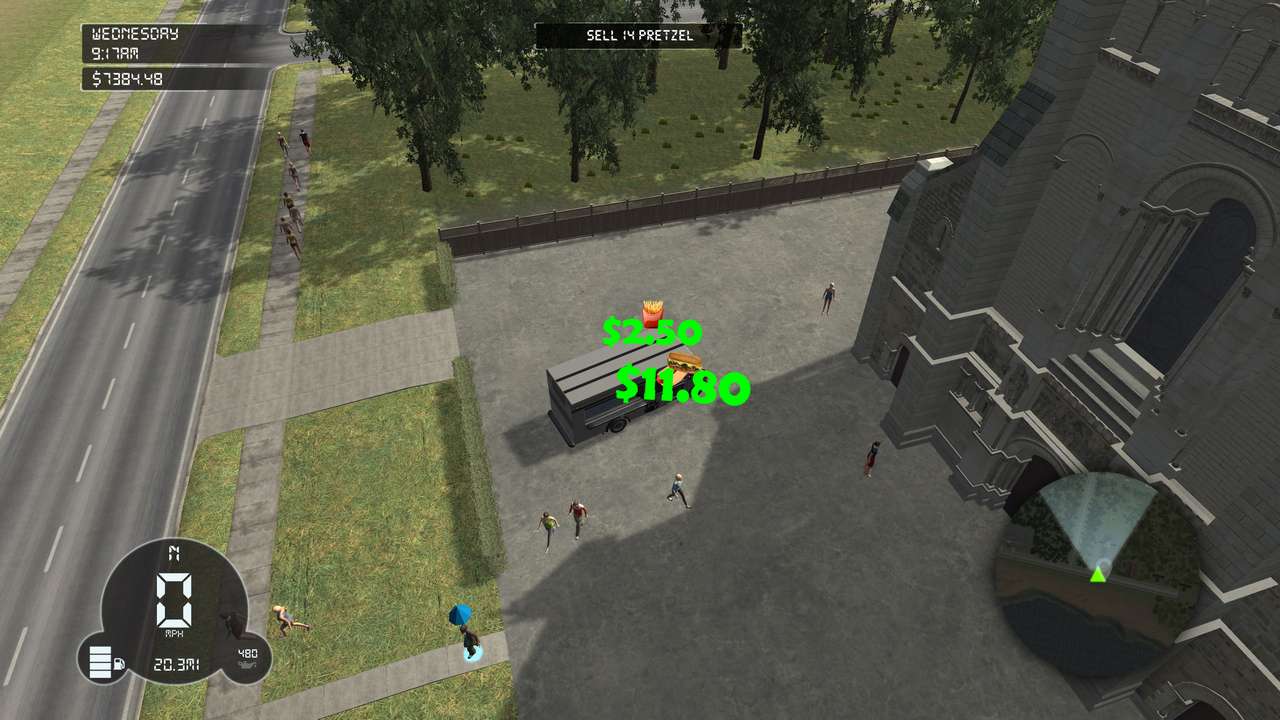 This creates a fine-balancing act between selling your products at a price that customers can afford, brings in a profit and allows you to add new stock. However, the game incorporates quite a few mechanics that can help alleviate the problems of starting your own business. It’s a slow process at first, but once you figure out a menu that works, then you can begin to build towards a higher profit margin, which ultimately impacts the scoring, allowing you to open the game up further. The more money you earn, the more you can unlock or buy, such as additional game features, game modes, bonuses, trucks and upgrades.

This is a mechanic that works in tandem with your scoring, as with each sale, your score increases. Each of the six districts, that comprise Luncher Island, have a score threshold that needs to reached in order to complete that area, thus earning you a trophy for that part of the island. The more you sell in a certain district, the further your score increases in that area and so on and so forth. However, your score points can easily be lost too, by running out of stock, pricing your menu too high and running over people.

As well as these elements to the gameplay, the game also incorporates other factors, such as timed missions, quests and competitions which all help in unlocking new items and upgrades for your business. These all add to bring a satisfying level of depth to the gameplay, offering you a myriad of options to fulfil and tasks to keep you busy. You even need to factor in elements such as washing your truck to keep it clean and attract customers, rotating your menu selection to keep it fresh and exciting and finding hot-spots for the best sales; dependent of the time of day with the game’s dynamic day and night cycles. 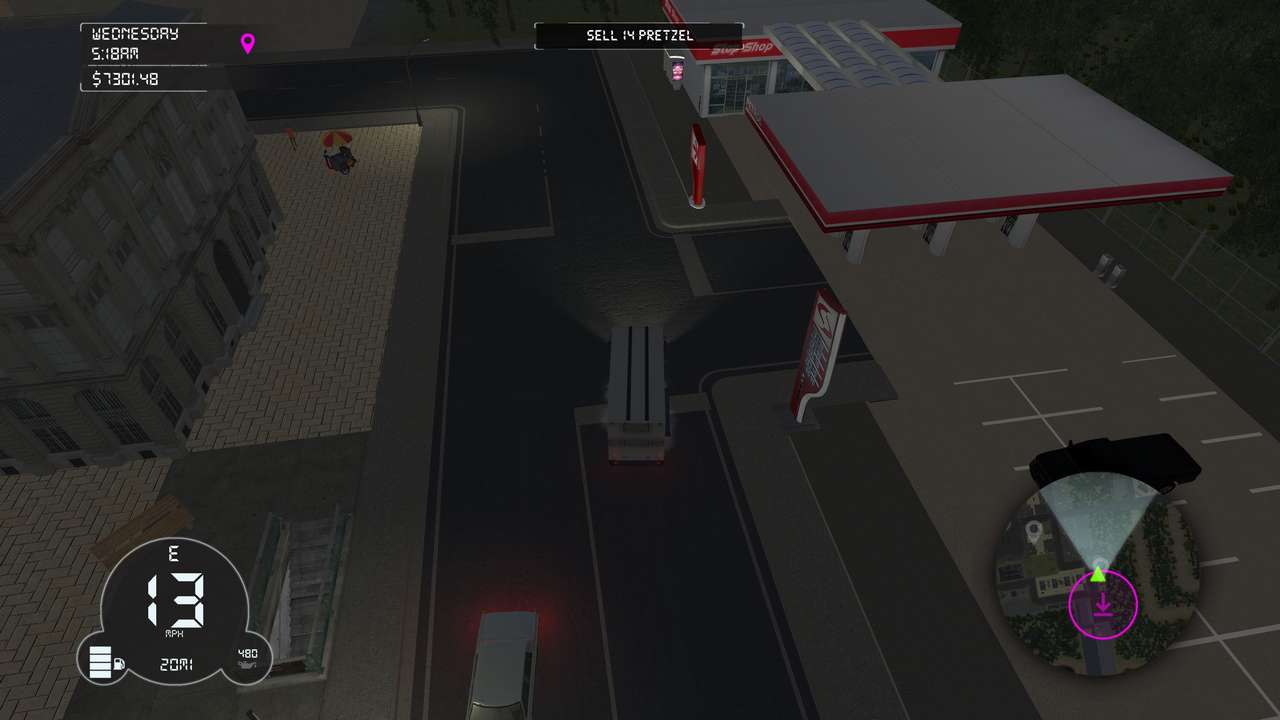 On paper, this points to a very intriguing game that comprises of many elements to keep you entertained. However, when it comes down to actually playing the game, this is a truck where its mechanics have unfortunately broken down. The game begins with a tutorial, the content of which immediately begins alarm bells ringing in its execution. Although its lacklustre narration tells you what you need to do, or where to go, it doesn’t really explain the details of working the game’s mechanics; instead it just presents a series of menus that are so messy in their presentation that the hit-and-miss mechanics of learning what they do can instantly hinder your progress before you even start.

Unfortunately, the main body of the game doesn’t fare much better. Viewed from a 3D top-down perspective, your range of vision of severely limited, this is further hampered by fiddly controls and a choppy frame-rate that can hurt your eyes as you play. Although the game highlights key locations, its use of navigation has been poorly executed. The general direction of your next location presents itself as an icon on the edge of a mini-map. However, its graphical representation is so dark it is akin to reading to a map in the middle of the night with no lights; even expanding the map to show the whole island lacks any real detail or sense of direction. This can lead to some frustration as you drive endlessly around trying to find your next location, particularly if up against timed challenges. The island itself also matches the dull monotones of its map. It’s a very dreary place that, although inhabited by pedestrians and vehicles, contains no ambience to promote any feeling of a living, breathing environment.

Overall, Lunch Truck Tycoon 2 is an intriguing title that does contain some elements and mechanics that are interesting to investigate. Unfortunately though, the island where you work doesn’t attract the same level of attention. Lacklustre locations, fiddly driving mechanics and controls, as well as confusing menus all add together to produce a frustrating experience that lacks any real direction of what the game is trying to achieve. It’s a shame, as this is very much a title that has a lot of ambition and potential, it’s just the majority of its mechanics don’t function particularly well, which leads to too many frustrations to make this game an enjoyable experience. Saying that though, if you’re a fan of micro-management and simulation games, then this is a title that may contain some interest for you as there are elements that are extremely playable; the problems arise with its overall presentation though but it isn’t something that a few patches can’t fix. Hopefully the developers will continue to support this title and bring it up to its full potential. But as it stands at present, with too many broken elements, this is simply a lunch truck sim that fails to deliver.