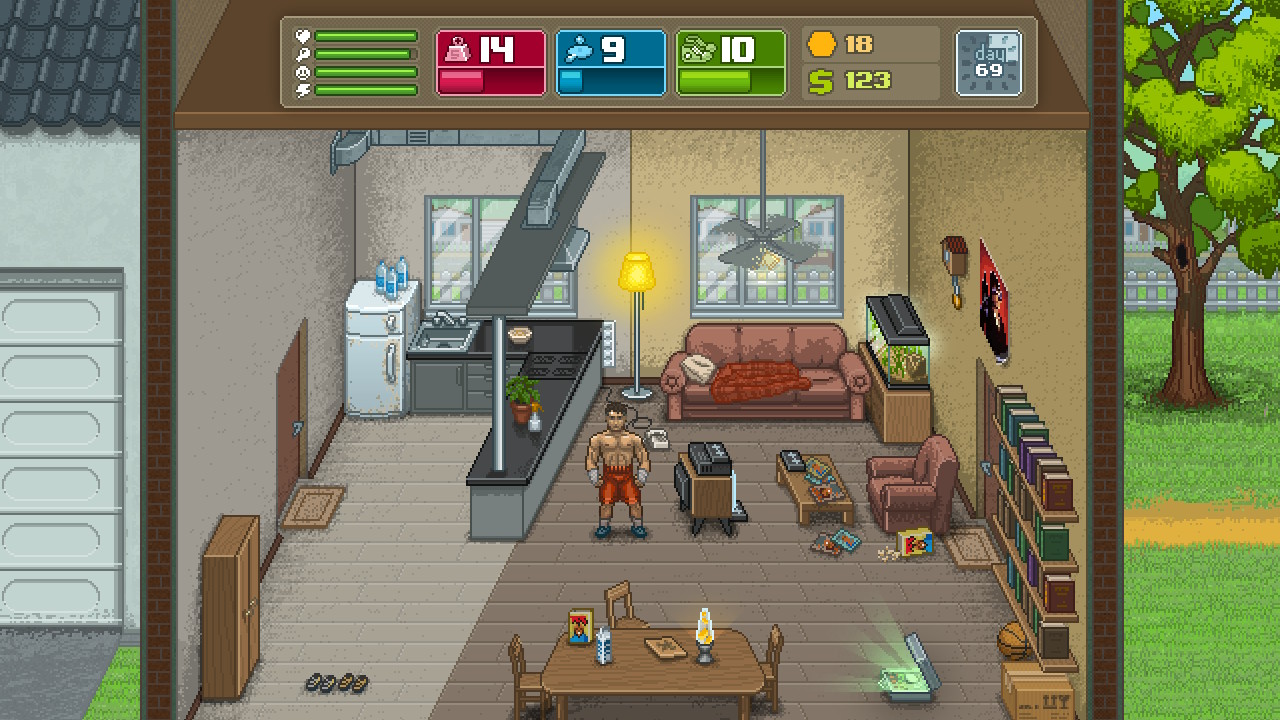 Have you ever just loved those action movies from the 80s and 90s? Folks like Stallone, Van-Damme and even Lundgren gave us these awesome snapshots of what it could have been like to be a tough, unstoppable badass who had to fight their way to victory, through either great movies (Rocky, Bloodsport) or questionable but still great movies (The Quest, Showdown in Little Tokyo). But we don’t always see what it was like in the full scope of what needed to happen for these great victories. Rocky was probably the closest, as it gave us highs and lows, but I really think Michael B. Jordan’s Creed is a shining example. However, when it comes to games, there’s nothing greater than a well-tailored simulation to put you in the shoes of the fighter. And Fight Club is easily one of the best ones out there, and now it’s on the Switch.

Punch Club is incredibly basic in the setup: you’re a fighter (whom you name yourself) who was orphaned at an early age when your father dies in the streets from an unknown gunman. You get adopted by a police officer, and then we fast forward like 15 years to you owning your own home and garage but have no job. On your way to work, you get jumped, get your ass kicked, and Burgess Meredith sees you and thinks you have potential. This is the first step on the long, long road to becoming the best damn fighter ever, and believe me, it’s a long and winding road.

The core premise of the game is to make good decisions in the realm of training, eating and economics to improve your character in one of three stats. The big three (strength, agility and stamina) translate into other things: strength is damage and energy cost, for example. Figuring out what kind of fighter you want to be will give your training focus. If you want to win the long game through the rounds, probably better to focus on stamina, and, if you cross your fingers for haymakers, then strength. Most people would suggest agility simply to balance everything out, but definitely mix and match. You’ll unlock different skills and fighting styles as time goes on, and your stats are dependent on if your fighter can use them. And by your fighter, I mean your fighter, because you aren’t part of this equation. 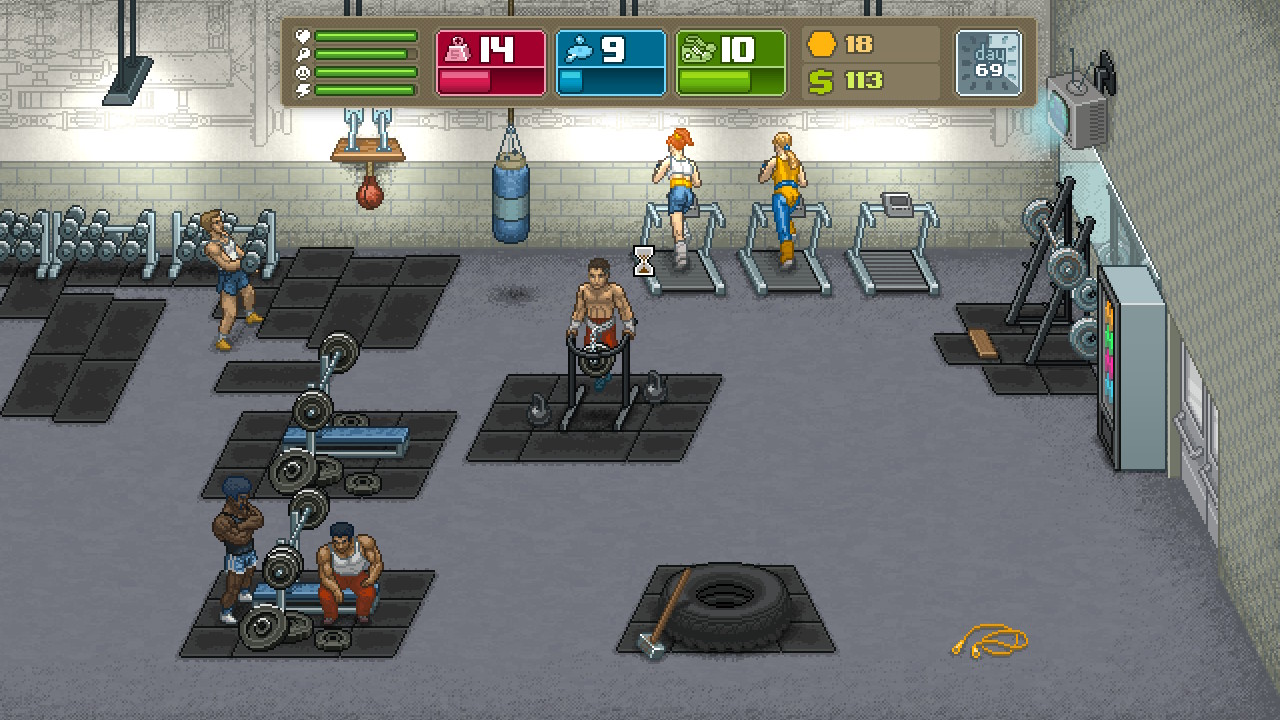 One of the biggest mistakes that players can make getting into Punch Club is expecting it to be any kind of fighting simulation. You’ll realize immediately from your first fight that your actual button prowess, sharp reflexes and finely-honed eSports skills mean nothing in this realm. Instead, being all about the management aspect is what makes this game work and shine. Our nameless protagonist is a great lump of clay that can be molded in any style that you think best benefits him, but, ultimately, his decisions to punch, kick, dodge and use extra skills are entirely up to him. As a result, the investment into how you shape him is extra important. When you see him fight, it’s less from the perspective of the fighter himself and more from a longtime coach or fan. You’ve done everything you can to build him up and make him ready: execution, however, is entirely in his court.

Having said that, Lazy Bear did a phenomenal job of creating a management game that is simultaneously simple and complex. If you genuinely just want to focus on becoming the very best, Ash Ketchum style, then the groundwork is available to you from the beginning. Train, eat, work, repeat. Hit the gym, hit the bags, hit the hay, hit that guy. Eventually you become a great fighter and kick ass in tournaments and that’s all you need. But there are legit RPG story paths that branch open, and you find those through the convenient Story Tree in the menu. From here, not only can you see where you’ve been, but you can see where you might be headed, and it’s exciting in a “glance at the next chapter” sort of way. Actually, it’s like Harry Potter once described Felix Felicis: it won’t show you the way to your goal, but it’ll light the right path.

And the Story Tree is what makes the game most worthwhile. Finding out about who was the man who killed your father, fighting crime and wooing a girl is what helps diversify the game into something even more interesting. Punch Club doesn’t want you to go into the glazed eye motif that comes with time management games or removed simulations. You are invested in every single choice you make and how it affects your character. Running pizza or jackhammering, improving your dodge or focusing on roundhouse hits, being strictly a street fighter or becoming a movie action star. There are hours upon hours of choices that can unfold before you in terms of what is coming up, and it’s incredibly difficult to 100% any version of the game. Basically, at some point, you need to make choices and decide what you want to do, but you still may look back and wonder “what if?” Which is why three save slots exist, because this is a video game, not a sad student art film. 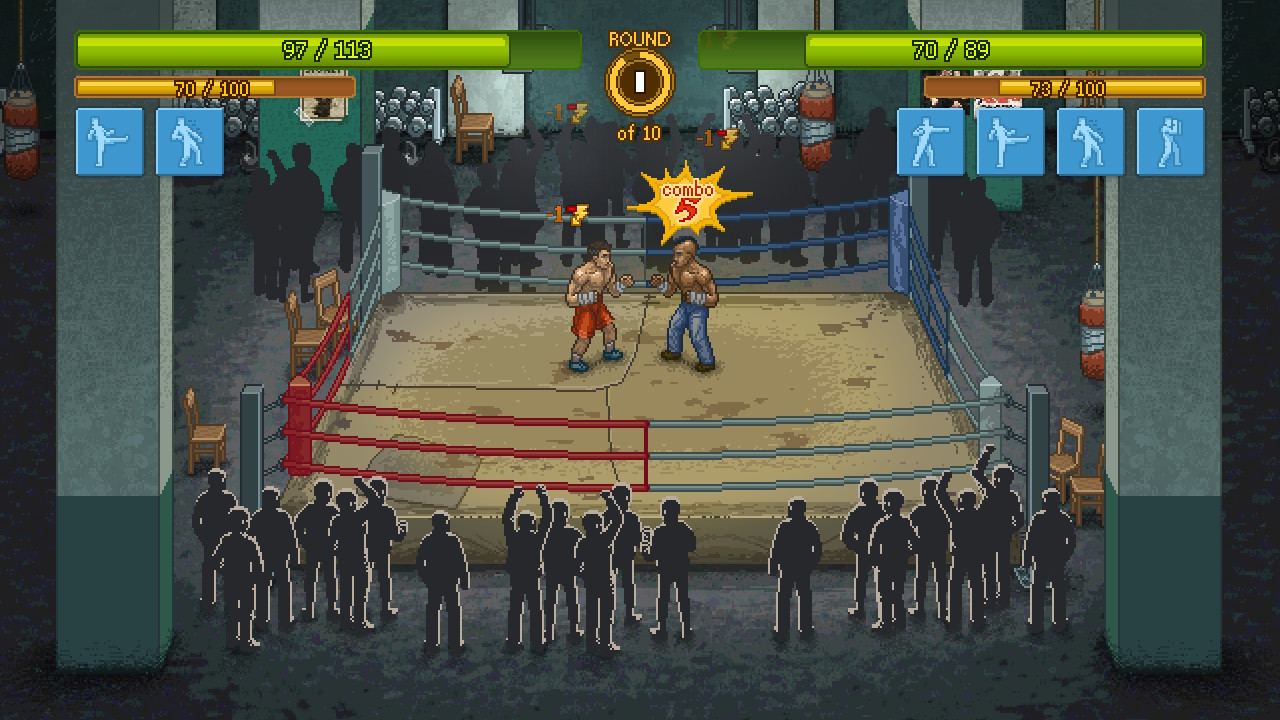 Now, that’s not to say that it’s nonstop action, story and excitement. Hell no. Absolutely not. After mid game (a few hours in) things start to take on a shinier and stronger light of giving you more autonomy, but, especially at the beginning, you’d best be ready to grind. Punch Club does an excellent job of reminding you that being a champion doesn’t mean just sitting around and then going on adventures. No, you gotta keep training and eating, because, guess what, your skills and stats deteriorate over time if you don’t give yourself some TLC. As a result, there are several moments that feel disjointed because you’ll suddenly about to embark on a great leg of story BUT first you gotta eat a steak, sleep for six hours and then eat another steak. There’s nothing worse than realizing the tournament you signed up for is a day away and your strength skill is slipping because you’ve wasted all your time doing show off appearances for cash instead of hitting the gym. Maybe take some questionable supplements to help get your stats back for a short period of time? Your call, but there will always be consequences!

For a game that’s been out for a while and exists on multiple platforms, the question of “Why buy on Switch?” will bubble to the forefront. First and foremost, the price is comparable to other locations: slightly higher, but that’s to be expected. If you got the game from Humble Bundle or whatever, great, good luck installing Steam on your Switch. Secondly, this is a really good port, with the game’s pixel art, fluid animations and solid soundtrack coming through in crystal clarity and performance. Additionally, this is the best mobile experience I’ve had for the game so far. The 3DS port was a bit sluggish and lacking, and the iOS version was either cramped on the phone screen or a bit stretched on an iPad. Tiny Build ensured that the Switch version of Punch Club looks great, plays great and makes total sense on this travel console. It’s the perfect combination of longform enjoyment or pick-up-and-play that can get you a few minutes of grind and enjoyment. You won’t be confused where you left off: the game will always guide you down the right path.

Punch Club is still one of my favorite simulations of all time because, simply put, it doesn’t feel like a simulation. I’m never sitting around just waiting for things to happen. When I need to build or bulk, it’s because I’m about to go do something. This isn’t a time management game where I’m always flying around, but you don’t lie back and let the game go wherever it wants. You’re invested, you want your fighter to succeed, and you decide how that comes to fruition. This is a damn great chance to show everyone that you, too, can be a wrecking machine.