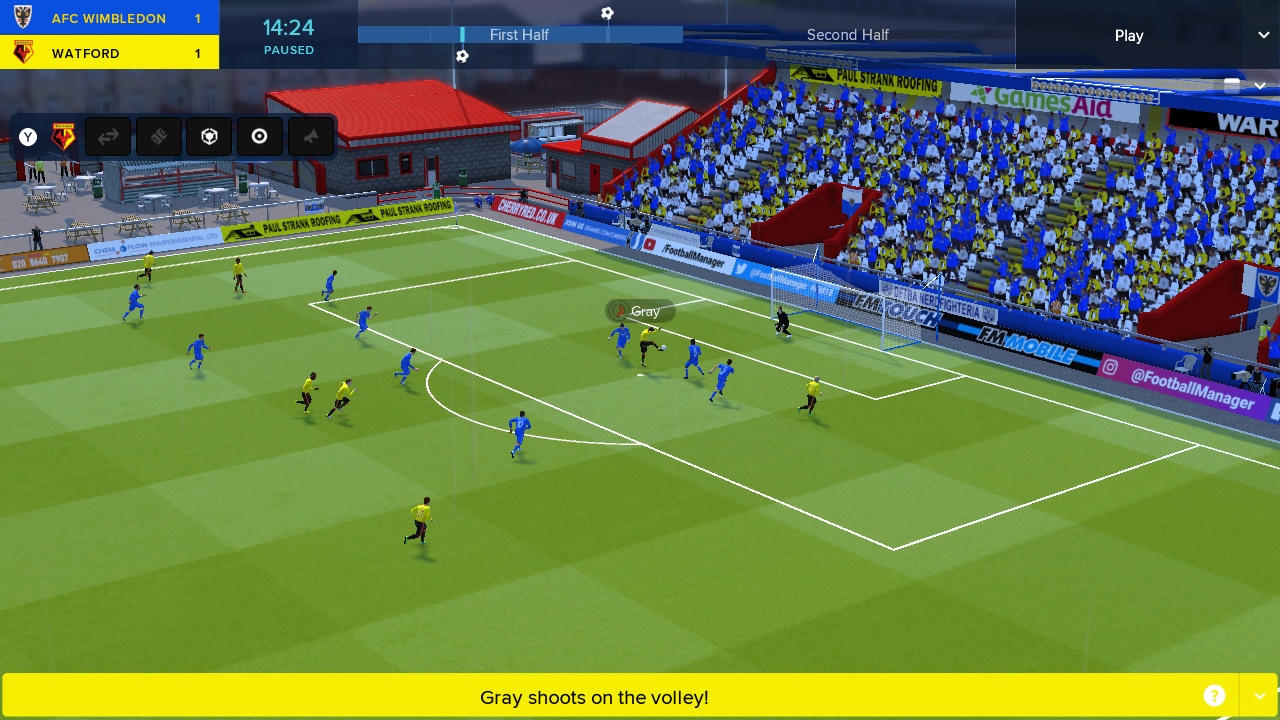 Football is known as the beautiful game; but that largely depends if you’re a fan or not. However, with a worldwide audience and the commercial success of EA’s FIFA franchise in its digital rendition, it is undoubtedly one of the most popular sports on the planet, as is FIFA arguably the king of emulating the sport on home consoles. Although FIFA does contain an element of strategic and managerial components in its mechanics, its main function is to capture the excitement of competitive play on the pitch. The backroom side of the sport has been usually been more associated with the Football Manager series, or Championship Manager as it used to be known; a franchise that, up until recent years, had been PC exclusive. However, with the introduction of the Football Manager Touch games, a more accessible version of the standard game and developed primarily for the mobile market, this management sim became available to a much wider audience. Where FIFA rules on the pitch, Football Manager is the pinnacle of simulating management and its latest outing sees it travelling to fans home and away as it makes a managerial decision to kick-off upon the Nintendo Switch.

Developed by Sports Interactive and published through Sega, this iteration of the famous come to the switch in its more accessible, Touch format. It’s essentially the same experience that you’ll find on its PC brethren, albeit minus one or two minor features and incorporates the ability to navigate menus using the touchscreen. Although more streamlined, Football Manager Touch still contains a wealth of stats and unparalleled level of detail that can be a bit overwhelming to newcomers of the series. However, with its more accessible nature, is a game that can be easily picked-up, although it can also be very brutal to master.

This is a game that is simply about choice. The level of freedom that this title allows you is simply staggering, with a mechanic that actively encourages experimentation as you strive to put together a winning formula to steer your team on a path of glory. As soon as you boot up the game for the first time, you are presented with choices; what club you wish to manage, what league you wish to participate in and even the ability to create your very own club and your own appearance and attire. 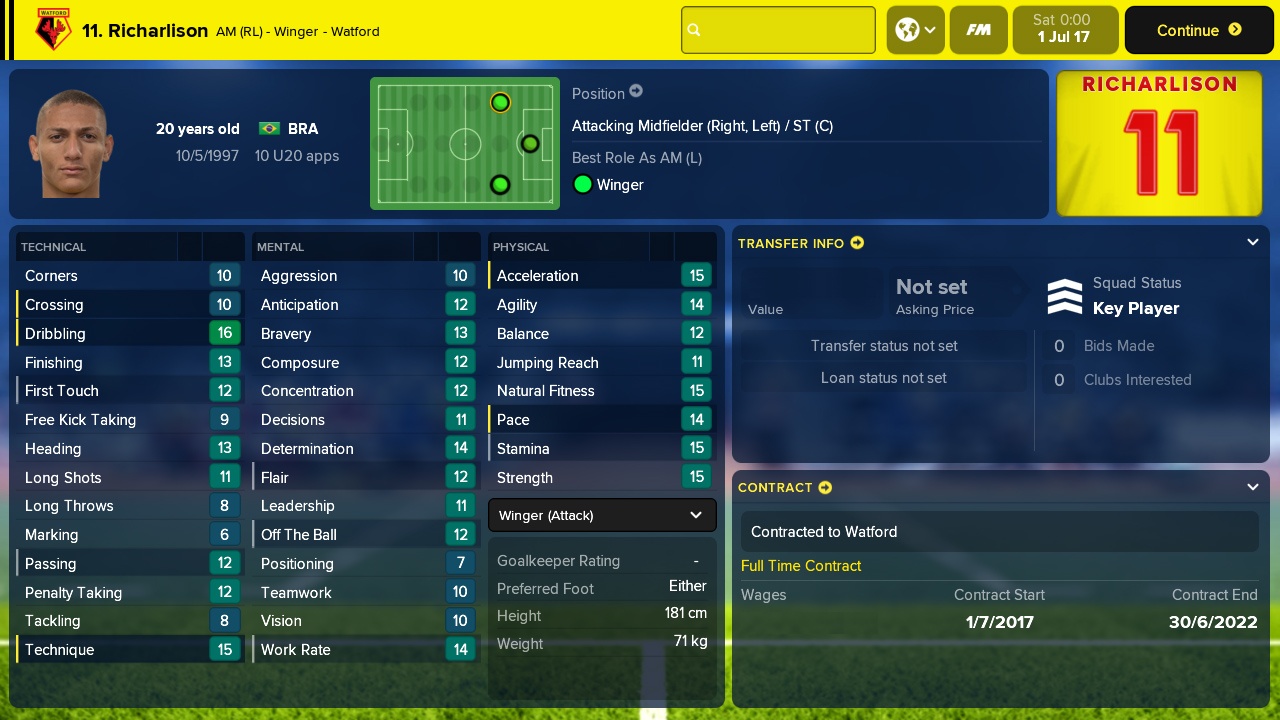 I won’t go too much into the extent of information within the game’s databases. All I will say is that its rosters include leagues from all over the world, including higher and lower tiers, as well as all of the player’s that play for each leagues participating teams, all cup competitions that are relevant to each league, country and continent, even the world cup and international duty are in there. It’s simply staggering the amount of information available to you at your fingertips; especially when you factor in reserve squads, transfer and loan lists and new talent through youth training that could produce the next world superstar. It all adds to produce an endless experience in the career of football management. Heck, you can even take a holiday if you want to.

The main staple of the game lies in its tactical element though, as when employed by your chosen team, it is up to you to utilise whatever options are available to turn the fortunes of the club around and produce a winning formula to their success. Various other backroom staff can be hired and fired to help provide useful information about reserve matches, upcoming opponents, key players, player performance, transfer markets and so on and so forth. You can follow the advice given to you, as well as fine-tune everything so that your tactics and instructions to team and player are too your satisfaction.

It comes together to produce a showing of your results on match-day. Using statistical information and 3D highlights, you can watch as your team perform week in and week out and tinker your strategies, either on the fly or with more refined details as you build upon strong performances or weaknesses within your team. Again, the wealth of information and options available to you are staggering. Everything you can possibly think of can be adjusted from playing mentalities, team formations, substitutions, training, wages, transfers and player-specific instructions. The whole presentation of its football management simulation is simply mind-boggling. It’s this wealth of information and options that produces the challenge of running a football team as trying to find the right set-up for your team takes a lot of time and practice to perfect. 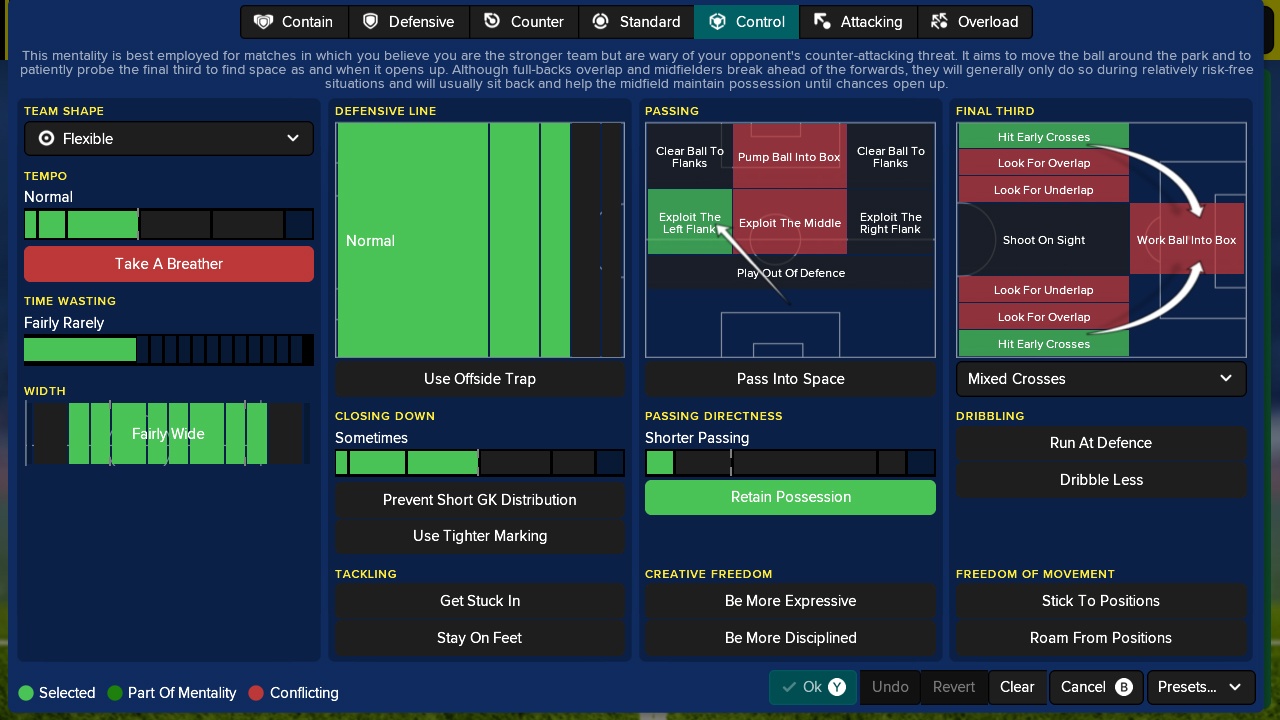 However, the rewards of watching your success or failure unfold is unsurpassable with the immersion and emotional attachment to managing your football team. Success brings true elation, such as competition runs, unbeaten runs and league promotions or championships. However, watching your team struggle also produces a high level of emotion that can be often frustrating. These easily emulate the real-life feelings of watching your favourite teams performance; even more so with Football Manager as you know that the fortunes of your club is all down to your own decisions.

Despite being a Touch version of the game, its utilisation of the touch screen upon the Nintendo Switch doesn’t fare so well. Navigating menus can be difficult at times with small icons that are difficult to select; especially if you have fat fingers like me. The game does support conventional controls and pro-controller support in two different varieties of control. The first involves navigating a cursor around the screen as if using a mouse-and-pointer mechanic. However, it doesn’t feel particularly natural. Its saving grace in control comes in the form of quick button selection though, with different options such as read next mail and proceed to next page or screen being implemented by pressing a button, such as ZR or ZL. This control scheme works surprisingly well and makes navigating the screens and menus a joy to control.

Overall, Football Manager Touch 2018 offers a definitive simulation of managing your own football club; a genre that is has been woefully missing from the Switch’s library. With its overwhelming statistics, options and choices at hand, the level of depth contained within is absolutely staggering. Its never-ending mechanic of pursuing a managerial career in football guarantees a longevity in its life that will keep you playing for hours, weeks, months and even years. However, the true pull of this game comes with the emotional responses that it garners from you as your attachment to your team performances and fortunes really do produce moments of elation and frustration that is easily unmatched by any other game out there; FIFA is probably the only other game that produce such an emotional attachment to its gameplay. All-in-all Football Manager Touch 2018 is a beautiful game that simulates perfectly the emotions of real-life football; the beautiful game.