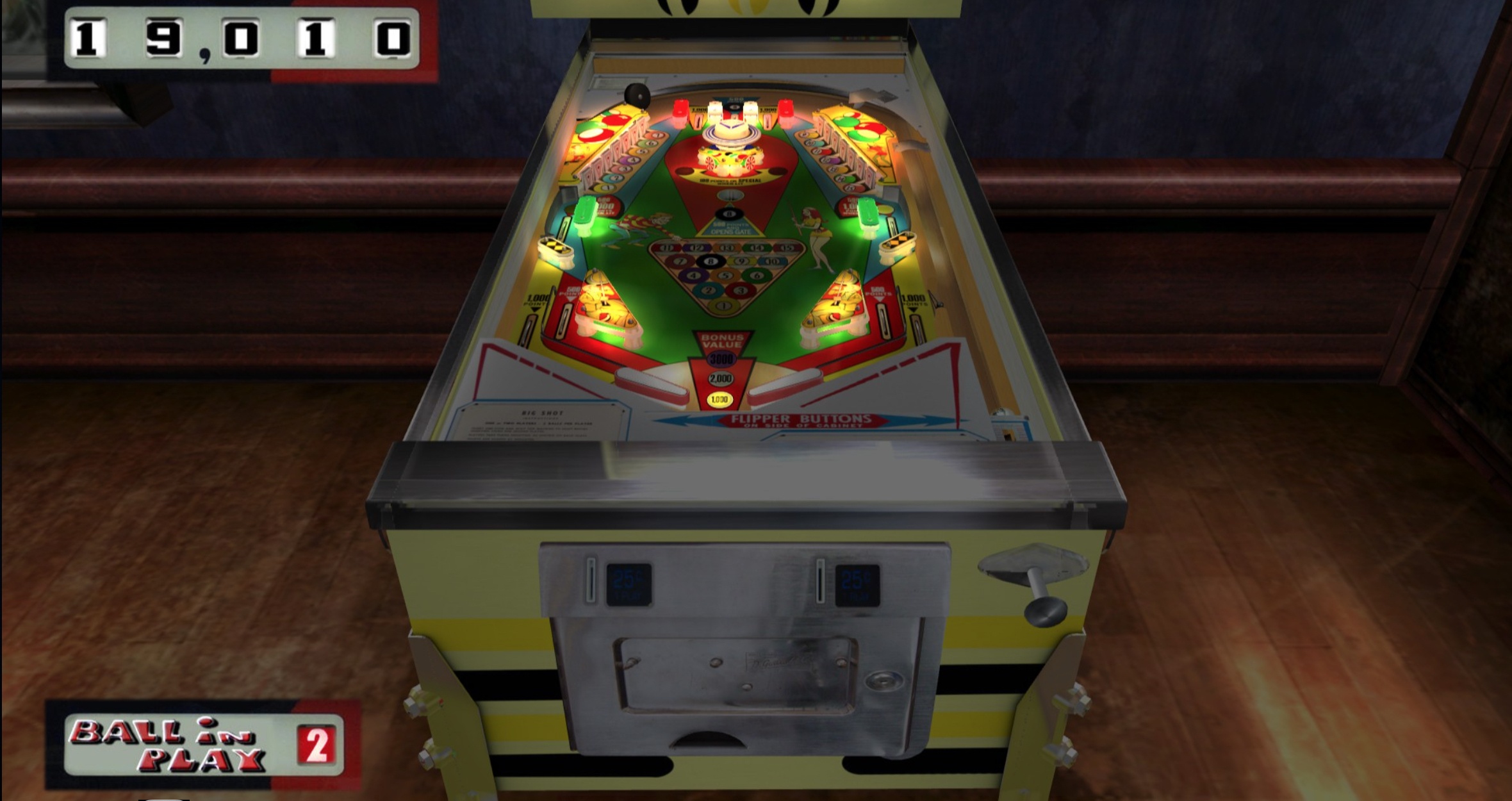 When the Nintendo Switch launched a year ago, a lot of people saw potential for what the little machine might do. There were party game creators, RPG porters and a bunch of homebrewers just salivating at the idea of a new portable that could finally retire the PSP. But, inexplicably, a bunch of people said “Yea, can’t wait to play pinball on that.” While I’m not complaining, it feels like a head scratcher: pinball was generally considered dead, killed by the incoming waves of video games that replaced the archaic, physics-based entertainment. Yet here we are, a year on in, and we already have top competition from the fanciful tables of Zen Studios, the classic entertainment of Stern and, now, Farsight Studios brings a massive collection of names with The Pinball Arcade.

The Pinball Arcade did, originally, release a bit back, but had to be removed from sale due to some licensing issues that, sadly, were not resolved in Farsight’s favor. It’s a shame to not have some classic tables available (especially the tables from Williams), but at least there are still plenty of others to take a look at. While Zen does a lot of the glitz in terms of new ideas and gimmicks, Pinball Arcade has the potential to tap into the classics market, similar to what Stern did but in an expanded scope. Only time will tell how successful that’ll be.

Naturally, there’s a lot to unpack here, but I’ll leave players to see how they feel about the very true-to-form designs, the overly simplistic but not unwelcome menus and the too-spot-on cover of Pinball Wizard that plays over the title screen. Instead, I’ll be diving right into the DLC, of which is there is a ton. You see, actually having all the pinball tables baked into a single vessel would be an insanely expensive thing, potentially, so every pinball game needs to have multiple DLCs out the gate. The Pinball Arcade is no exception, though I have to hand them credit: these DLC packs are at least intriguing. The first that we’ll explore is the Gottlieb EM pack. Gottlieb was one of the granddaddies of midway entertainment, with some pinball designs that predate the second world war. Nearly all of the ones in this pack come from the 60s and 70s and, as such, have some improvements over the oldschool variations but are distinctly still dated.

Big Shot is certainly an interesting table, as it’s designed for two players to essentially compete against each other to see who can score more in a single round. Created in the style and spirit of a billiards table, all of the points are lined up along the sides with an 8-ball drop in the center of the table to symbolize when your run ends (along with the normal drop at the bottom). This table is credited as being one for professionals and collectors, and it’s easy to see why. Many of the tables in Gottlieb are quite unforgiving, but Big Shot is one of the hardest. Due to the angle of the table and the bumpers, everything is very loose, flighty and bounces like crazy. The right and left lanes are open to dead drops at a moments notice, and you’ll find velocity builds quickly if your odds are poor. Almost all chances to score points are in the upper register, which means needing to line up the shot, nail it and use minimal table bumping to try and keep things going. 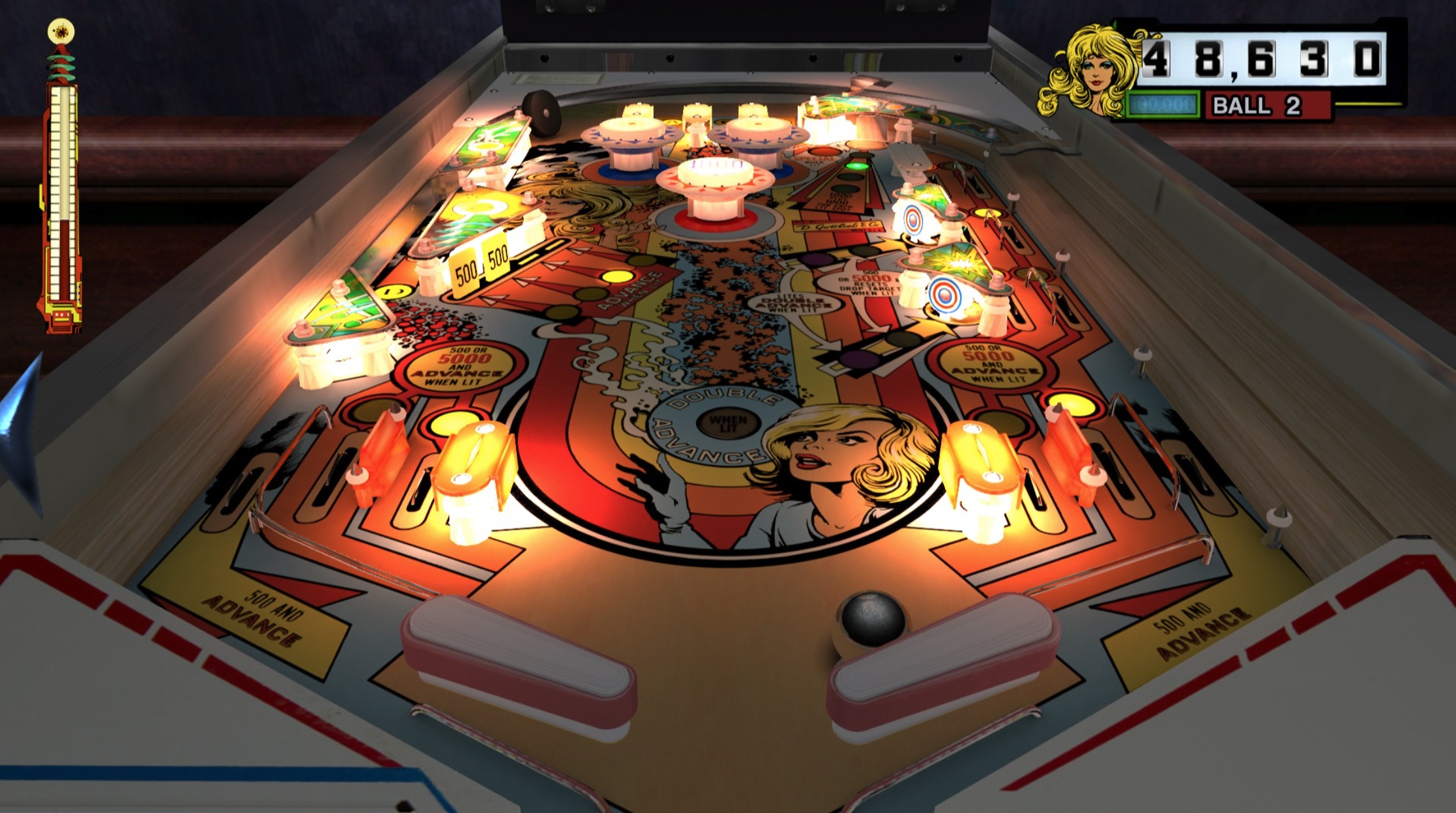 Visually, it’s a gorgeous table, full of color and lights, and it really helps capture the idea of the billiards kings that played in the 70s. Conceptually, having folk who loved to compete in pool transfer the action onto a pinball table is sound, and I actually would have loved to see people play at this table back in the day.

Centigrade 37 is a mostly enjoyable table, from the classic comic book artwork to the gimmick of filling up a thermometer to unlock specials. Hailing from the later 70s, Gottlieb had learned a few tricks with this table to help keep people engaged. Though we weren’t yet at the level to have incredibly flashy visuals and tricks to grab your eye, there’s a lot going on here in terms of lights, flashes and changes. A multi-slotted right lane had changing lights that showed a bit of luck in terms of maximizing your point score. The triple set at the top register that you could only hit from launch was a huge point get and helped people learn to finesse their plunger game. And the flippers are a decent length to allow for fewer cheap drops (though the one-time side bumper idea hadn’t let been brought to life).

But Centigrade 37 is also a shift in terms of points and high scores. You have to get a LOT to fill up that thermometer, and it feels less “I gotta get those points!” and “Urgh, do I have to get these points?” You run out of steam quickly because there’s less variety here than you would imagine for what you need to do. Targets fall, bumpers bounce and you keep arcing into the top area to get more points from the waterfall descent on the right. In the end, while there’s nothing inherently bad with Centigrade 37, this might be more of a collector’s item than a playable situation.

Central Park, interestingly, is the oldest table in the pack (1966) and has some of the most retro appeal of all the tables available here (and really on any pinball game I’ve played so far). Emulating what people felt was the atmosphere of the times, the table is incredibly colorful, with vivid pictures of a man and his trained money, carousing in lush greenery and bright clothing. With a simple score table and even simpler bumpers, the big incentive for the table is that the monkey will ring a bell every one hundred points. That’s not a typo: that’s actually a feature that’s also a feat. You see, most of the bumpers are somewhere in the ten point category, with smaller targets being worth up to thirty points and some being worth a single point. The first time that monkey rings the bell it’s because you frigging worked for it, and that’s almost impressive.

After that first bell ring, the numbers will start to multiply, with the ten point bumpers gradually increasing in value and things getting a bit easier in certain aspects. The table then proves that it’s got teeth, with these stubby but not ineffective flippers and a massive, gated drop window. The monkey and his man may be smiling, but this is not a good time affair. You gotta be fast and accurate or you lose that ball in a hot second. While later tables will allow you to hold the ball with the flippers to line up the shot, nine out of ten times you’ll come in way too hot for these shorter flippers to contain. As a result, Central Park is easily one of the most exciting and engaging tables in the pack, and a fantastic snapshot of the past. 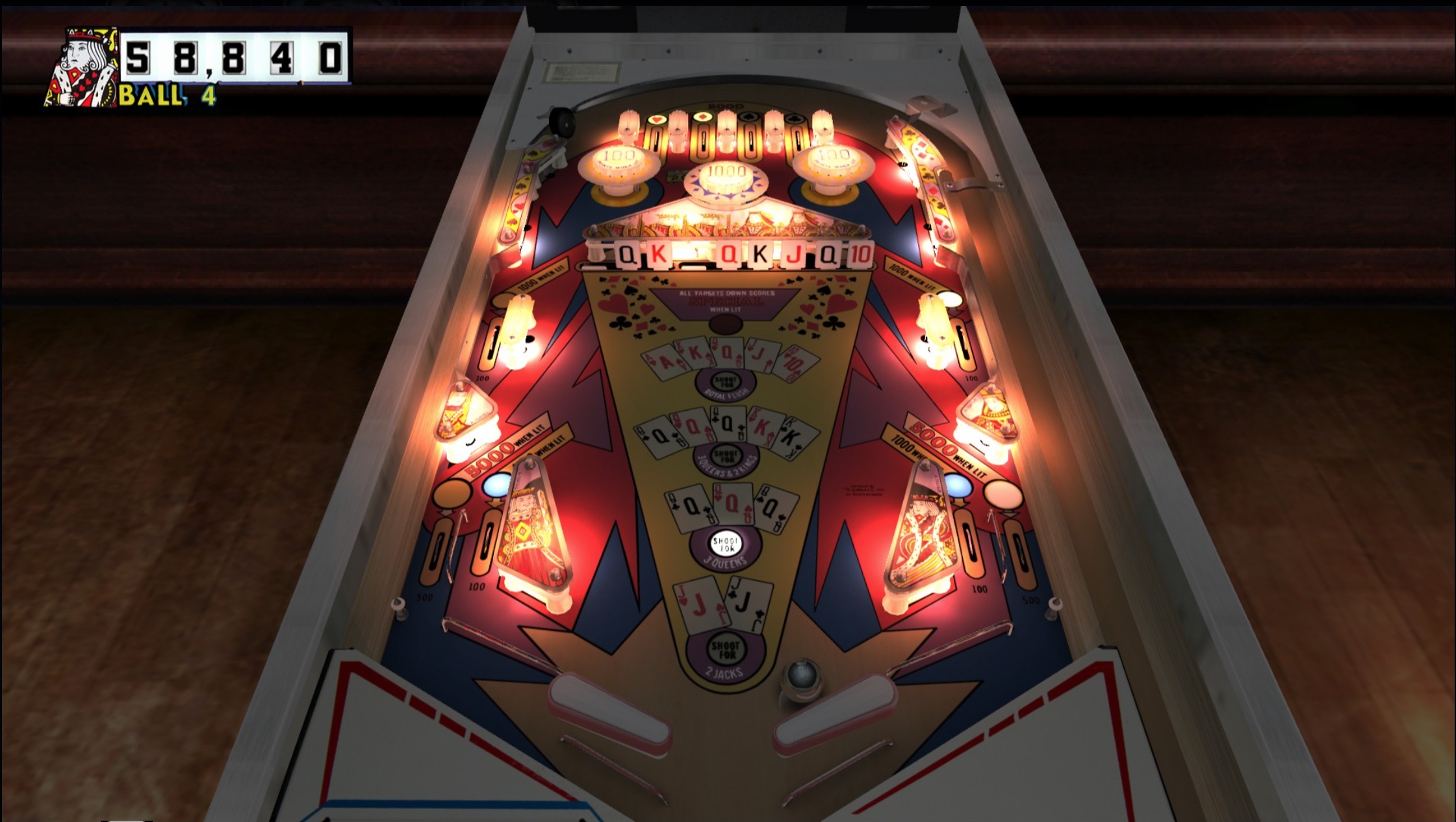 Comparatively, El Dorado is a severe and sad step down as the next table in the pack, despite coming nearly a full decade later. Born in 1977, there’s so much that has potential for El Dorado: a cool desert/cowboy motif, some great target placement and one of the earliest examples of double flipper sets that I could find. The design and layout is pretty, and it helped to inspire and give shape to a future table (Cities of Gold, 1984). It’s one of those things where you could see what could come from the table, when it finally gets there. But the problem is that the table was designed in 1977, and, as such, there are certain limitations for the game.

For example, the bottom half of the screen is basically barren. Sure, there are some bumpers and death lanes on either side, but the main area of the table is just this large, blank canvas that almost disturbs the eye with the cowboy that they splashed across it. Instead of being engaging, it’s distracting and you lose track of the ball very quickly on a table where falling out can be an instantaneous thing. Additionally, the secondary flippers, instead of being optional and useful for pros, are 100% necessary to hit the top register for points, which makes it feel more like a bisected table that’s been hastily glued together. The whole thing just screams for needing some kind of extra flair to it that they couldn’t possibly fathom back in the 70s. Had they the technology to bake in some extra goodies, like moving targets, it would have been perfect. Instead, it’s just an almost awkward situation.

Lastly, Jack’s Open. This is a simple and clean table that has a great execution and division of chores. Given the motif of trying to make poker hands through target shots, this is a table that rewards persistence and greatly rewards accuracy. If you’re able to actually strike the necessary cards for making high point hands (starting with a pair of Jacks and ending with a Royal Flush), you’ll catapult to the top of the high score list in no time. If you just manage to hit all the targets in any sort of order, you’ll still do well, just not as well, because it’s a waste of time. The four lanes at the top represent the four suits and the bonus for lighting them all is pretty decent, but it then resets your hand progress. The flipper length is decent for cradling, and the accuracy is tight enough that even someone who’s a bit daft (like me) can still get decent targeting. All in all, this table might be short on review words, but that’s because it’s solid, enjoyable and gets the job done.

You’ve got some sound effects for the Gottlieb tables, but there’s no ambient music, no screaming soundtrack. It’s just you and these classic tables, so please weight that in mind when you decide to pick it up. Still, at five tables, it’s a pretty decent value, so longtime fans of Pinball should consider it when and if they download the Pinball Arcade title.