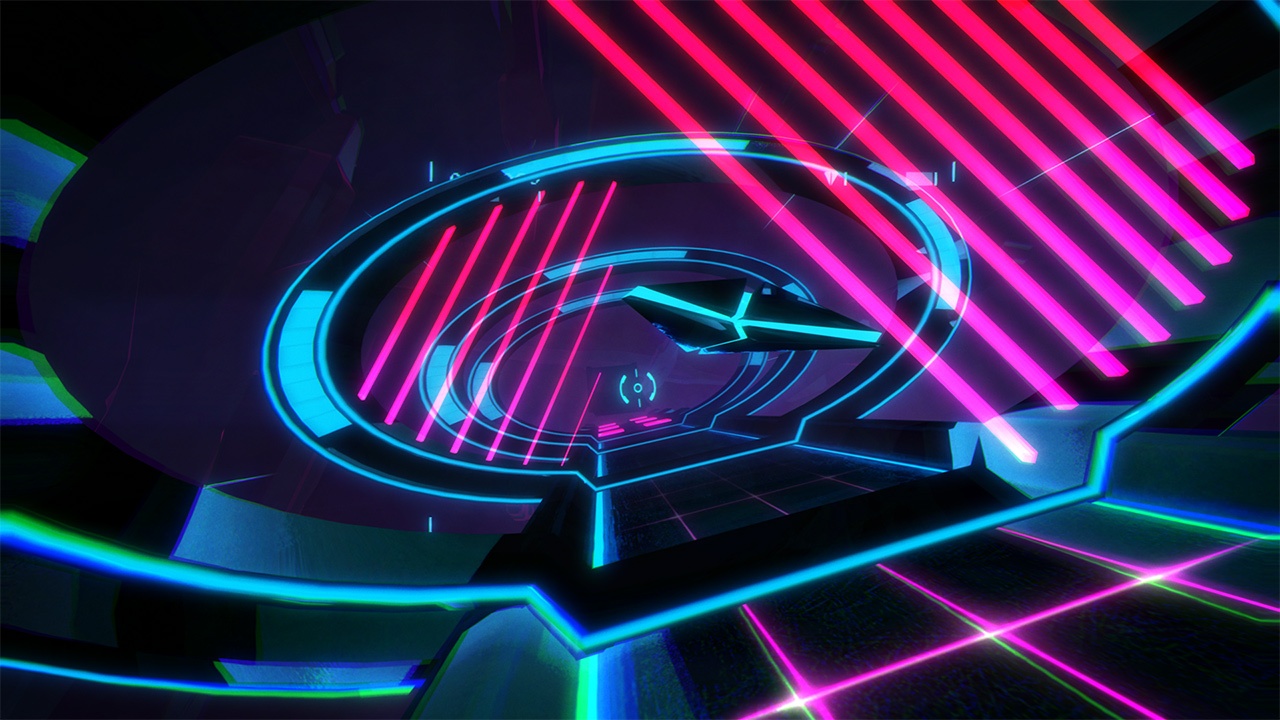 The 80s are long over and dead, and they weren’t nearly as great as everyone thinks they were. Thinks like The Wedding Singer and 80s themed parties have helped to boil the decade down into a concentrate of neon, synthesizers and unitards, and I guess that’s alright. But it’s important to remember that there were ten LONG years in there, not all of them were great (Pan Am especially hated this decade) and a good deal of the music and video games were trash. Which is true of every decade, but the 80s sometimes get a pass because of how they’ve been retrofitted to today. Still, having the decade of decadence inspire your game elements and aesthetics isn’t the worst thing, and, for GRIDD, it really allows for certain elements to get a pass.

GRIDD: Retroenhanced is a throwback arcade shooter that’s HEAVILY inspired by the sci-fi culture that spawned from the 80s, specifically cyberpunk and what people thought computers would be like in the future. You’re a hacker of some kind, which means you navigate a ship that looks like low-poly Penelope through an Internet that looks like Lawnmower Man. Blast through defense systems and barriers, penetrate codes and defeat monstrous “security systems” that feel like they could have worked for Hexadecimal. If you manage to get through the incredibly unforgiving arcade mode, you’ll have the opportunity to play endless and challenge your own focus and determination in the face of nonstop obstacles and well blended synthwave. 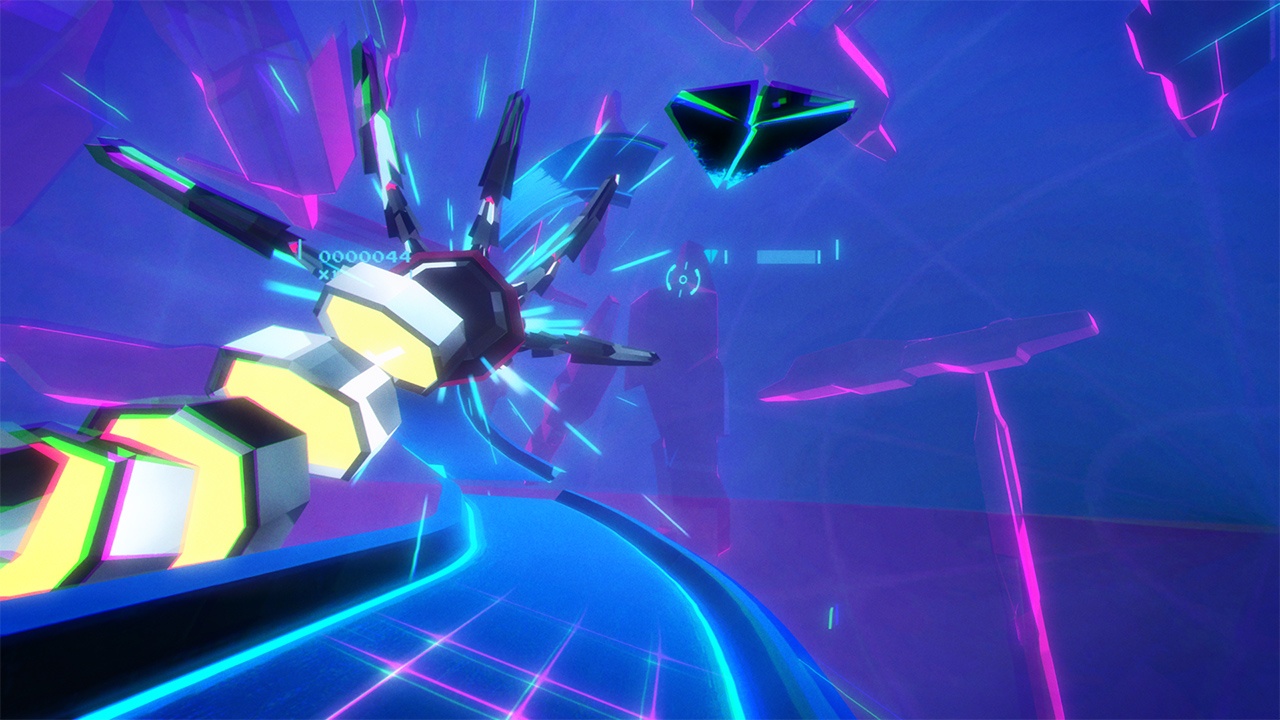 Right up top, GRIDD does a lot right with it’s presentation. Even though there are some distinct tracking glitches in the menu to remind you of what decade we’re emulating, the actual gameplay is sharp, crisp and incredibly angular. You end up with a wide swatch of colors that all pull from the same retrofuture palette: plenty of blues and reds with a constant purple hue, all set against what I like to think of as electric black. If you remember the hacking sequence in Kung Fury, you’re in the right spot. Or just stare at this album cover and you’ll get the gist. It’s not a bad thing: in fact, by simply conforming to the notions of what you think this game should look like, GRIDD makes sure it appeals to the audience it’s most playing towards. When you combine it with the soundtrack that Dream Fiend put together, you realize that it’s a fully formed dream from start to finish, and achieving the look is more important than even what the core game mechanics are.

As for the game itself, GRIDD asks you to zip around in multiple directions, using the same POV to both steer and aim, which can sometimes make for difficult shots and navigation. If you had to decide (and most players will), it’s recommended to play GRIDD in the mindset of “choose your battles.” If you keep trying to shoot everything that comes your way, you’ll end up stressing out and also making bad decisions. Instead, the player should really make sure they’re safely navigating pass the neon obstacles, the charging entities and the massive shots from bosses, who come pretty fast and furious after the first few minutes of the game. The tone quickly shifts from “dodge through these lanes” to “neon Titan Souls” as the security systems that you attempt to hack are none too pleased with your progress and only get angrier. Between battles, you’ll get snippets of angry AI exposition, reminding me of a cross between NO THING and I Have No Mouth and I Must Scream. 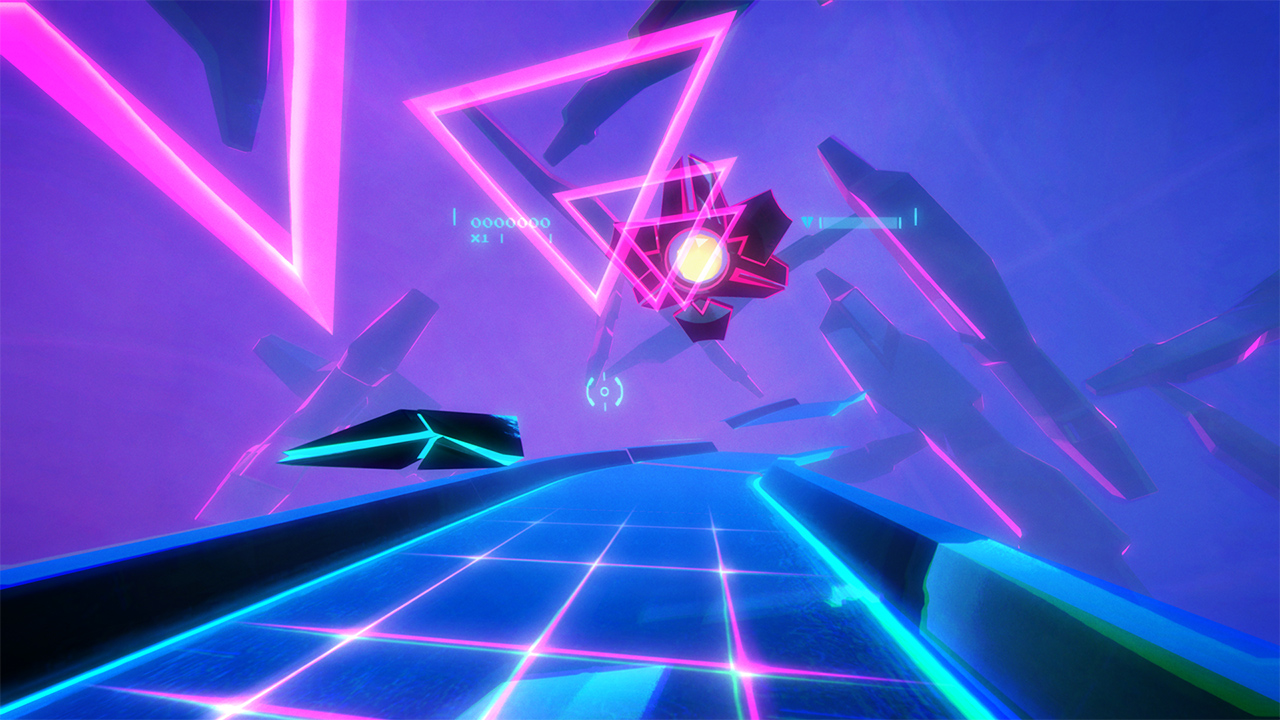 There are powerups along the way, and, when given a choice, always go to the shot increase. See, if you’re tight, the shield doesn’t make a lick of difference because you don’t need defense if you’re agile. The health recharge is the same deal. But the bigger shots are always useful, because that means less time shooting Job and more time learning and perfecting your dodges. It’s pretty interesting how the combat and targets evolve as you play along, moving from controlled atmospheres and objectives into massive, almost interstellar arenas. As much as GRIDD says that it wants to be a retro arcade shooter, it shows a great deal of modern thought in terms of layout and execution, so much so that you could reskin the game and pass it off more as a nod to the past instead of a straight up homage. Still, the look is a big part, so the fact that Antab Studio made the choice to keep to the appearance but deliver a solid and strategically sound game is a smart move indeed.

Now, GRIDD: Retroenhanced does have one thing going for it on the Switch that needs mention: the Glove of Power mode. What can only be described as an ambitious concept, you can pair the game with a singular JoyCon and then grip it tight in your fist, using motion controls to navigate and the ZL or ZR button to fire. This, effectively, makes it feel like you’re playing how the old Power Glove, and it actually translates incredibly well. This mode is the thing that makes it worth the price of admission alone: Glove of Power is surprisingly tight, gives a new strategy to play, and reminds you to work on your arm strength because you get TIRED holding your arm up for a full 30 minute playthrough. What other video game encourages you to get back to free weights? Not many!

Sadly, GRIDD. is a comparatively short game, clocking as much time as the games it seeks to emulate. While this doesn’t diminish the experience or make for an unsatisfactory play, the amount of time one can invest in a game is considered for the consciencius buyer. If you’re really into the retro scene and want to love a game that captures the good points while discarding the bad, then GRIDD is a fantastic choice and a modern classic. If you’re looking for a game that goes further than skin deep, however, you’ll find this to be far too brief an interaction.