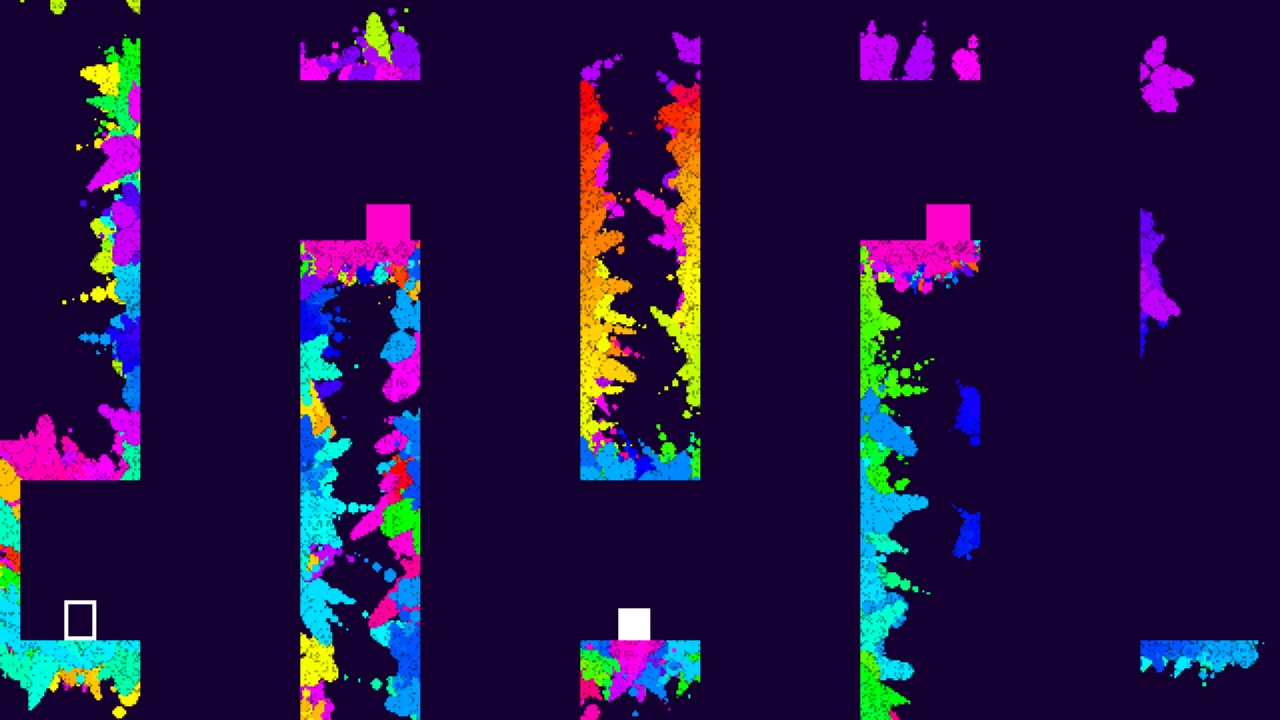 INK is this prime example of what can happen with a very base concept that has modest execution. Developed by Zack Bell and published by Digerati, this unique puzzle platformer has been out for a while on every other available console (PC, XB1, Toaster, etc.) but has finally come to the Nintendo Switch. When it comes to older titles that aren’t exactly retro but hardly new, players might have a tough time deciding if it’s worth their time, money and effort. For INK, as a unique title that is suffering some serious Switch markup (nearly twice the PC price), the answer is a dubious “maybe.”

The game itself is solid as an idea. You are a white cube that has to make it to a glowing door. The problem is, every inch of terrain between you and the exit is completely invisible. The only way to see where you’re going is to cover things in ink (hence the title), which you give off by sliding over surfaces and double jumping, which results in a release of spray in random directions. After the first couple of tutorial stages, things immediately take a turn for the challenging, as pitfalls, randomly placed squares and surprising walls prohibit the easy way from ever being the answer. Once you get a bit of a hang of things, we then introduce a few elements at once. Enemy cubes that need to be stomped a la Mario before the gate will open. Scrolling worlds that actually take up more space than you see on the screen and require some hunting. Turrets from afar, actual boss fights…the list goes on. In spite of everything, you’re still left with the same abilities that you gained at the beginning of the game: jump, move, double jump. 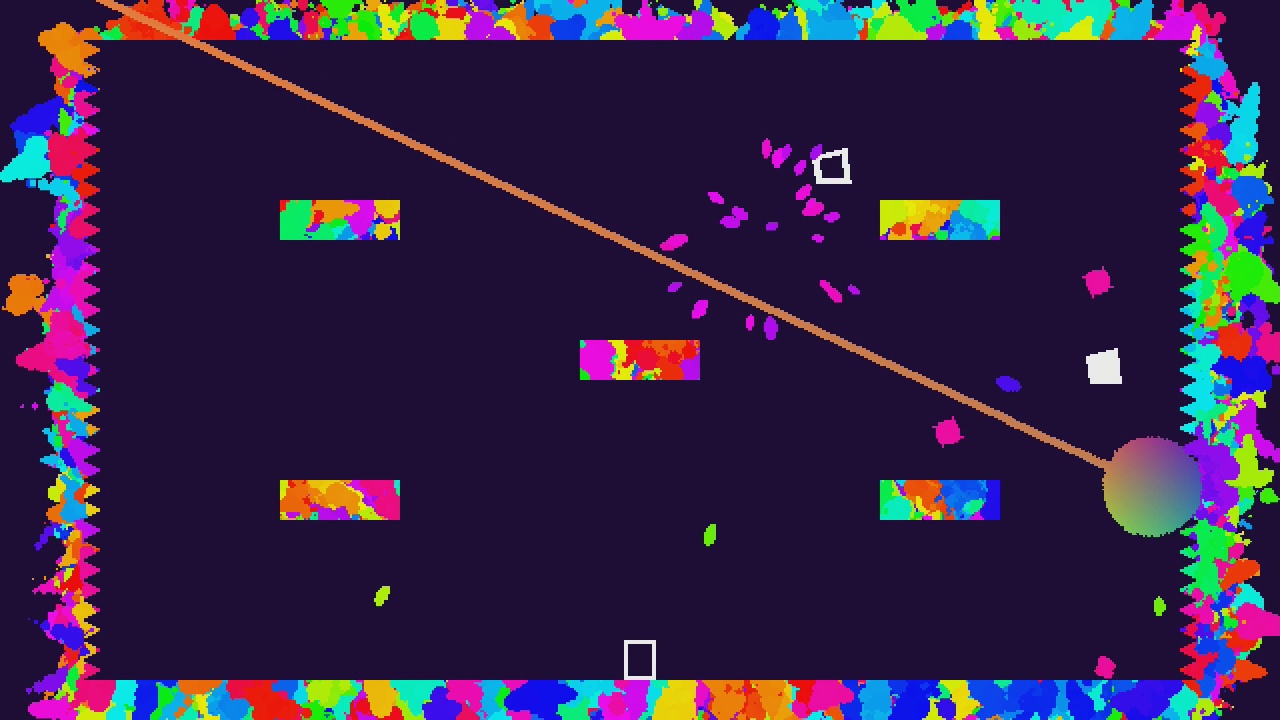 To it’s credit, INK does a lot right in terms of presentation. The use of colorful trails coming off the player and the enemies does make for an intriguing reveal, and being able to see what the world looks like once you’ve nearly uncovered everything is spiffy. I always like going into a new place and wondering what I’ll encounter this time, and I’m usually surprised by the layout. It’s a really interesting balance as well, because, even when you know what the whole damn level looks like, that doesn’t necessarily make everything easy, especially once you get past about level ten and things start to take a turn for the worse. The musical score of the game also does a wonderful job of adding a layer of tension and wonderment, mixing electronic ambience with some light beats to keep the player engaged and active. Intermix the occasional sound effects from the hopping and your inevitable death and you’re good to go on the artistic presentation.

Gameplay wise, I’m torn about INK. On the one hand, I really do enjoy the way the game tries to get the player involved and assure you that dying multiple times per stage is not only acceptable, but natural and expected. There’s this ability to turn a timer on or off if you really want to challenge yourself for speed run purposes/additional limitations, but there’s nothing necessary about it. There’s also these hidden coins that actually feel like real, hidden objects in a classic game. It comes across, in many modern titles, that the secret treasures are basically just rewards for looking slightly to the left of where you should be. With INK, you usually have to map out the stage entirely to realize the path needed to get to those elusive coins, and that’s a kind of reward that most players won’t bother to put in the effort for. As a result, the reward for the tenacious feels justified and aptly placed.

On the other hand, the controls can be a bit of a nightmare at times. INK knows that you’re going to fall into the odd placed abyss here and there, and probably land wrong on a stray ink bullet or, worse, the ink sharks you have to deal with at one point. Fair enough. But those penalties are a lot harder to accept when the game comes across like you’re floating a vast majority of the time. I can’t tell if it’s just a purposeful choice by Zack Bell to make things feel more viscous since you’re leaving ink everywhere or if it’s just poor reflexes on my part, but I grew to hate it. More than once, I would try to jump up somewhere and I would magically overcompensate and go flying past the platform and into the void of death beyond. A few times, instead of jumping normally, I would jump and almost immediately double jump, causing an ink spray, almost no gain in height whatsoever, and a loss of a saving ability should I screw up. When your controls are so limited, having them be tight and accurate is key, and that doesn’t feel like the case with INK. 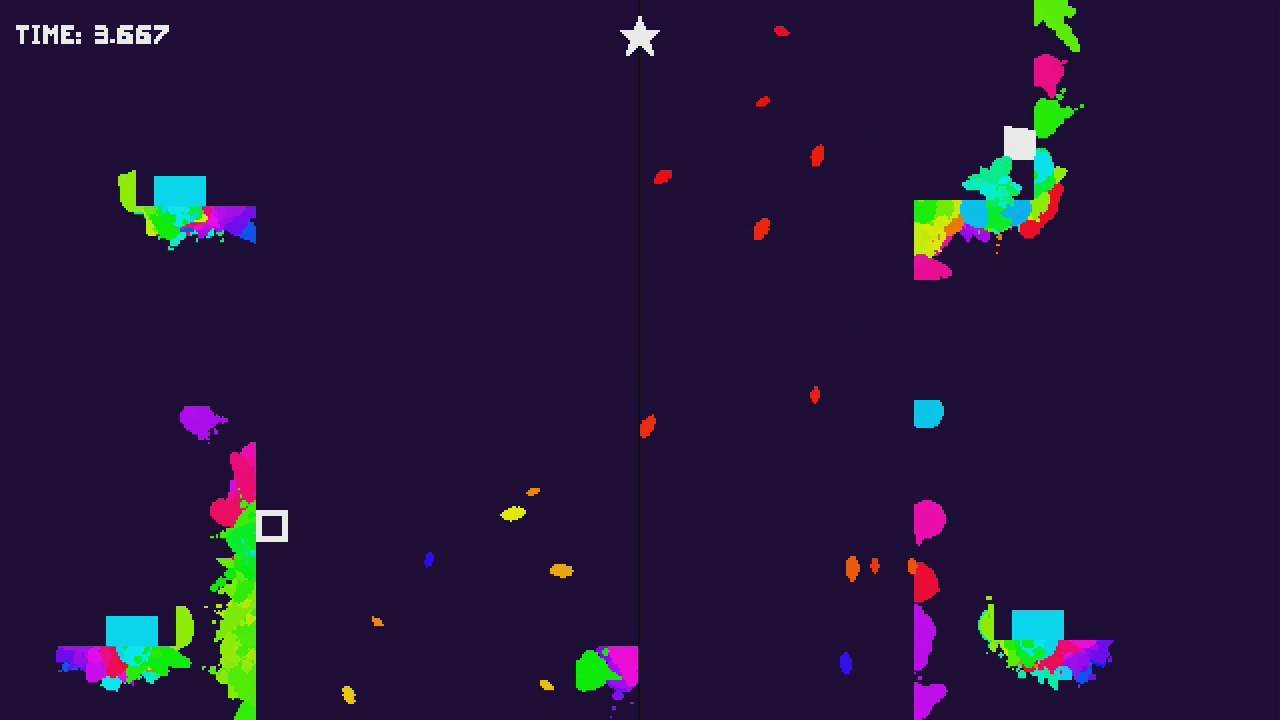 Lastly, there are just instances where the game feels unnecessarily brutal, and it really sucks the fun out of things. For stages where you have to eliminate enemies before opening the gate the penalty of dying is full reset. So it doesn’t matter that you had to leap two screens over to kill those three guys and are heading back east for the others, if you die you gotta do them all over again. There’s probably a sect of people who believe this is a proper challenge and helps give the game hardcore creedence, but it kind of sucked the enjoyment out of things for me. I wanted forward motion, not to be stuck in a holding pattern because of a missing wall. Seriously, at least put up a proper stopper so I don’t fall sideways into eternity from a missed jump. Compounded with the aforementioned floaty movement and it’s a recipe for thrown JoyCons.

I do like INK, I really do: the appearance is excellent, it has a ton of levels, and the co-op mode is both fun and a great way to avoid doing all the heavy lifting yourself. It can be a little bit of a chore at times, but the solid soundtrack and cool presentation often counterbalance the fact. For players familiar with the game, however, it’s far too difficult to justify the nine dollar price tag for something that you’ve already played before. And, for newcomers, take a look at some current players before you dive into the INK vat. You don’t want to drown if it’s not what you signed on for.