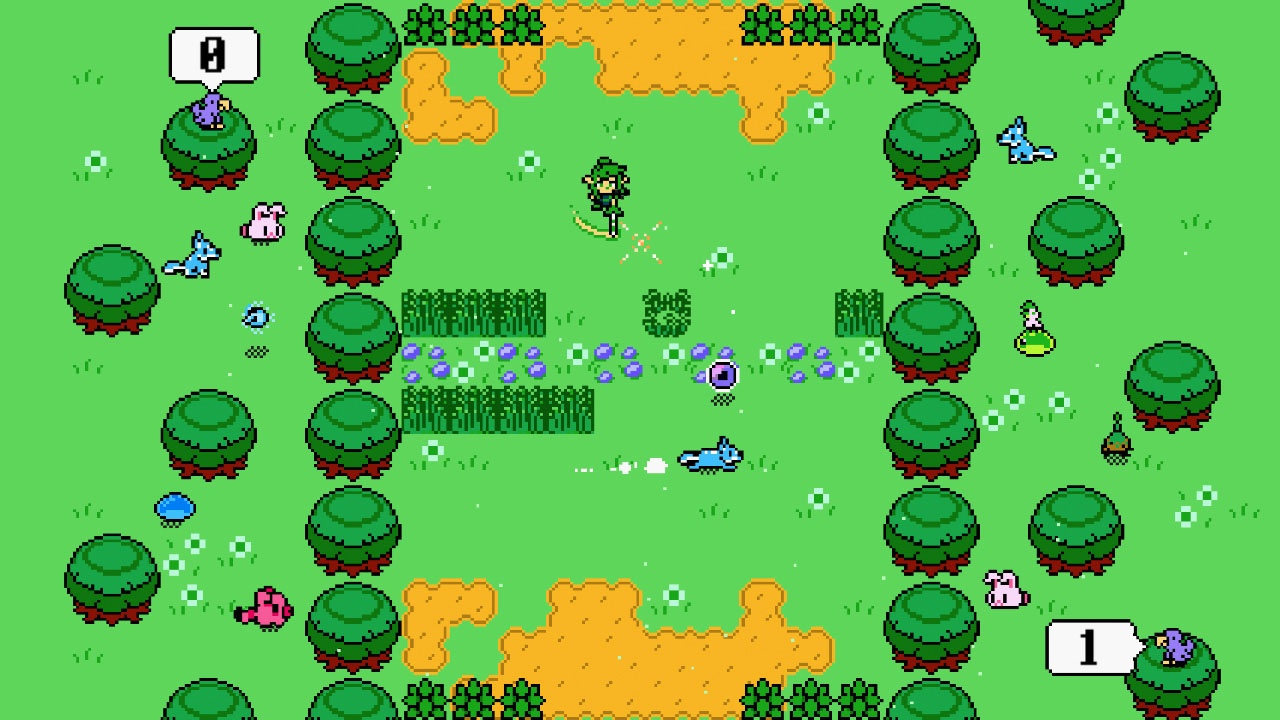 Never underestimate the power of someone selling you a dream you didn’t know you had. If people only ever kept playing the games they liked and never tried new things, then there wouldn’t have been a damn game since Pong, because that’s all people liked. Well, ironically, the game that I’m looking at today definitely shares elements of Pong, but also a lot that I couldn’t have imagined in a simple game. Things like Link’s Awakening style graphics, surprisingly versatile gameplay, and a gatcha mechanic that leaves me just frustrated enough to keep trying it over and over again. I’m talking, of course, about SpiritSphereDX.

From the minds of Eendhoorn and Fabraz (the Slime-San folk), SpiritSphereDX is a bizarre but quaint take on the vertical game of video game tennis, but does so with aplomb and ingenuity. There is a storyline here somewhere, but it’s equivocal to trying and extrapolate the story out of the original Street Fighter II. At the core of it, there’s a tournament, and everyone is competing in it for reasons that are their own. However, instead of punching and kicking each other, you have a swordswoman, an axe-wielding dwarf, an evil sorcerer, a dog…cat…thing, and several other contestants all trying to make it through ten different challenges to face off against the grand boss of SpiritSphereDX. It:s really best not to analyze the storyline too much, because it takes away from the fun of the core gameplay. 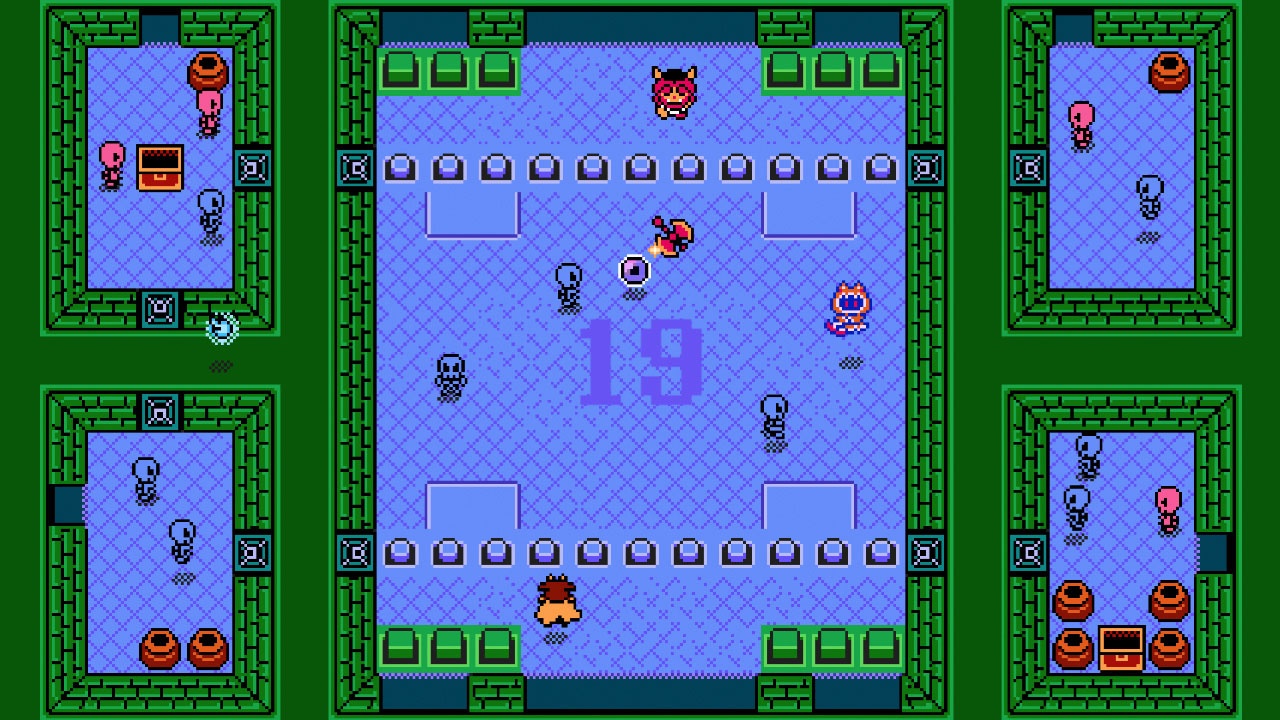 When you first get into SpiritSphereDX, there are some things you have to learn. Everyone has a regular strike, a charging strike and the ability to dash and hit the sphere with their body. However, every single character has a different approach to things and you need to learn it accordingly. Lin, our sword swinging protagonist, has the most understandable and basic of moves, and the most balanced of stats as a result. Buster, the animal, is incredibly fast but it’s charge attack is a snoot boop: if you aren’t directly on top of and in front of the sphere, you’re gonna miss. Dwarf, the dwarf, actually throws his axe for a regular attack and does a dizzying spin attack for a charge which can result in an easy miss when you’re not lined up properly. The point is, you really want to give each character a try to see what playstyle you jive best with, and also to see the different endings for everyone. And yes, there are characters to unlock, so don’t feel like you have to choose someone immediately: just get good enough to get to the end of campaign mode with someone.

For the main game style (Pong style), SpiritSphereDX is fun, addictive and intrinsically easy to pick up and get good at. You immediately adjust to the player that you’ve attuned with, and you can go multiple rounds with a friend fairly quickly. Playing on the big screen is a lot of fun, but you owe it to yourself and your friend to give the handheld, two player vertical mode a try. With both players crowded around the screen and holding either end of it, it creates a fun, almost intense atmosphere of gameplay, and also makes sure that the normal distractions of couch competition (nudging, elbowing, etc.) is left behind in favor of new distractions (Switch shaking, sweep the leg, etc.). Seriously, I know not everyone will use these styles of gameplay, but for Eendhoorn to bake these in as options is a great nod to understanding the Switch’s versatility and, in tandem, understanding the audience.

SpiritSphereDX also pays its dues by making sure there’s a good variety within the game. Besides the obvious number of characters and their campaign endings, the play modes are pretty fantastic in and of themselves. Four player matches on the big screen? Got you covered. A three player “boss fight” where the lesser team gets to be the bigger dude? Pretty great consideration and a lot of fun to stick younger siblings or even children as the boss to give them a sense of mightiness. And besides the traditional tennis matches, there’s also squash and a handful of mini game modes to help keep things fresh and interesting. Not to mention the different kind of spheres and items that’ll crop up. What, you didn’t think it would look this much like Zelda and not have some cool gimmicks, did you? Spheres that drop coins, shoot fireballs and split into two equally dangerous and important spheres. Levels with skeletons that attack you, shrubs that re-grow to block your shot and sweet spot goals that give you double points. And being able to activate magic running boots, sphere-changing spells and firing arrows that affect both the sphere and the other player is just the icing on the cake. You see, beyond having just a great setup in technical tennis playing, SpiritSphereDX also incorporates so many bells and whistles that, if you’re like me and totally suck at sports, you can still get lucky by overwhelming your opponent with additional stuff that you might win on sheer chance. And who doesn’t love watching an opponent’s carefully crafted strategy go to hell because you threw a well-timed bomb on their side of the field? 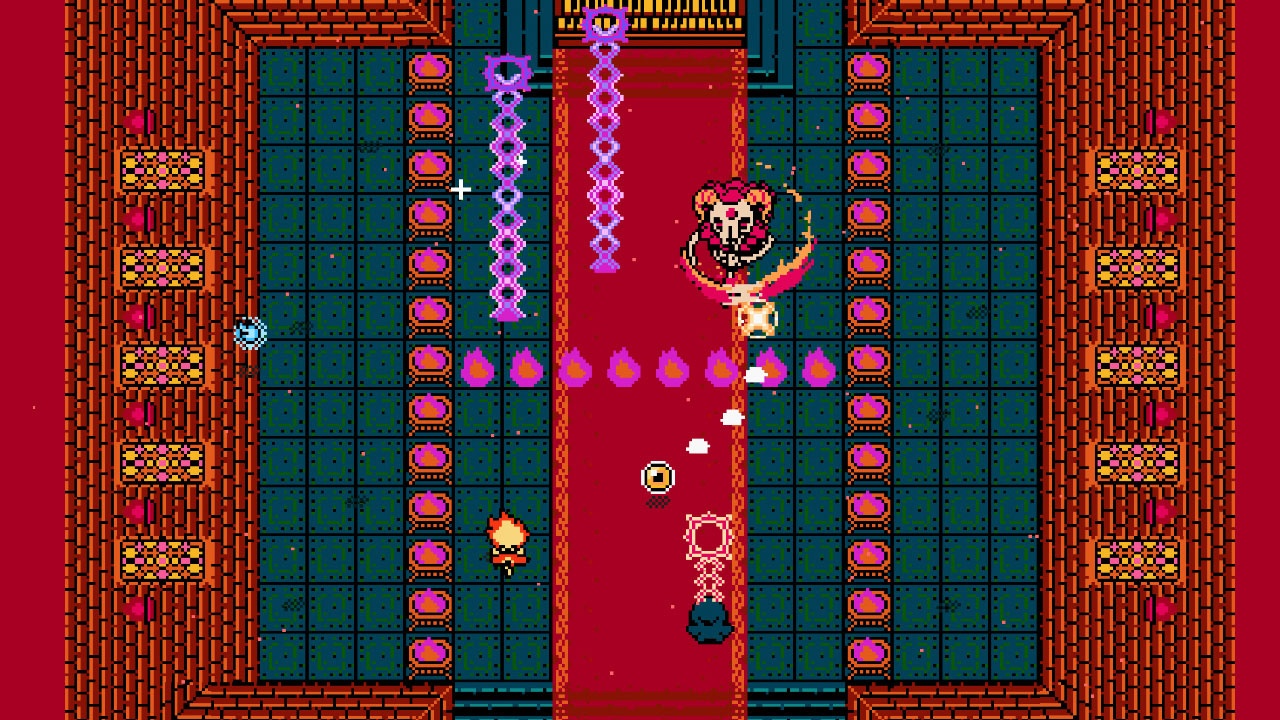 Lastly, the aesthetic of SpiritSphereDX is right in line with the quality of work that Fabraz brought us with Slime-San, though definitely in a different direction. These pixel graphics are straight up homages to the heyday of the Gameboy Color, and there’s not a damn thing wrong with that. Slightly blocky sprites mixed in with some surprisingly detailed portraits between matches, the effect is only amplified by the carefully chosen color scheme that pops no matter what the skin you decide to use. Oh, and the coins that you get from campaign mode will, inevitably, allow you to unlock even more skins and extra goodies for when you play against friends (including some of those spheres I mentioned earlier). But the number of duplicates that you get is goddamn infuriating. Don’t get me wrong, coins are easy enough to get: two matches in Campaign mode is enough for a couple pulls. However, when my second ever time playing got me a Gold Dwarf Costume, and then my third time got me a Gold Dwarf Costume, I knew I was in for a bit of a grind. Like, Super Mario Run levels of gatcha grind, but at least these coins came from fun matches and, most importantly, were totally optional.

I love seeing indie devs helping other devs, and it’s wonderful and amazing that Fabraz worked with Eendhoorn to bring SpiritSphereDX to the Switch. It’s light, it’s playful, it has plenty of single player content, and it positively shines in multiplayer fun and frantic moments. When you take time to enjoy SpiritSphereDX with friends or by yourself, you’re enjoying the culmination of years of gaming, through multiple generations and iterations, coming together to this one, singular, sculpted and, yes, silly moment. Maybe you’ll rock out with Ozo and use dark magic to win it all. Maybe you’lol keep using Buster because snoot boops are the best attacks ever. But you’ll have fun. And, if I remember correctly, Nintendo is all about the fun.