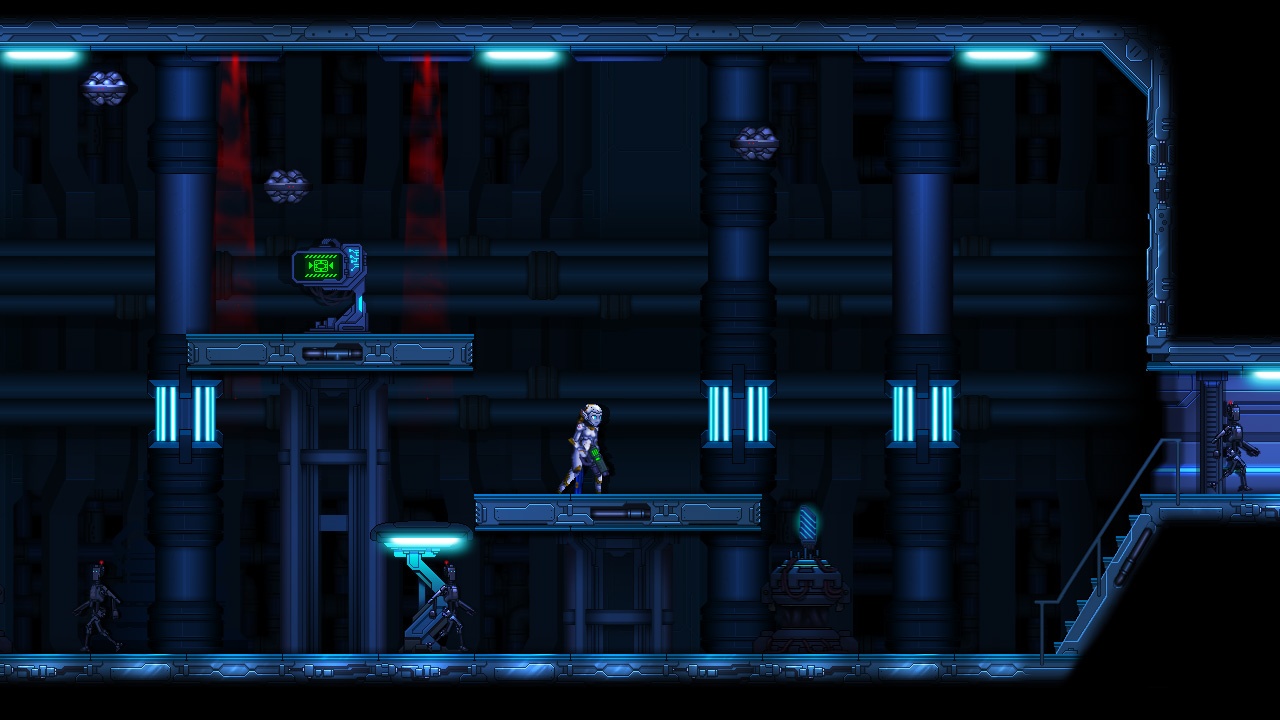 Some of the best games out there do a service to players and critics alike by catching them off guard with questions and ideas. For example, anyone who’s bothered to play Every Day the Same Dream are left with questions regarding reality and free will, even though they may have only come to see what the Flash game was all about. But when a piece poses from a different angle – kind of like how ICEY went down it’s own meta path – it does something to the receiver in a borderline unsettling way. And that’s one of the really, really cool parts of Ghost 1.0. Not how the game plays, but what it has to say.

Ghost 1.0 is the story of Ghost, a mercenary for hire who uses a series of amazing technical pathways to project her consciousness into androids, called Chassis, that she can control from a distance. After two rich but awkward characters, Boogan and Jacker, contact her handler, Viktor, Ghost is off to the Nakamura Corporation to steal some AI code. See, Nakamura make the best damn robots in the galaxy, and it’s believed all their androids operate from commands of a single server. Ghost’s job is to bust into Nakamura, steal the AI code and get out, letting Boogan and Jacker get rich from auctioning it off. However, it soon becomes apparent that Viktor and Ghost have a hand, however unwittingly, in Nakamura’s business, and things begin to take a weird and violent turn for the existential. Players eventually need to confront the morality of what it means to be human and to be an android.

Ghost 1.0 presents as a real metrovania experience, asking players to do a serious amount of searching, backtracking and exploring in order to make the most out of their expeditions and ventures. Players will pick up a ton of augmentations along the way, aiding in their primary weapon, their secondary weapon, their general movement and their health. Your primary rifle recharges itself automatically, but at a slower pace than firing, meaning you can definitely run out of bullets and need to stay frosty till your shots come back. Finding key cards and unlocking doors remotely will also be quite important, and the unlocks come in a twofold situation. On the one hand, Ghost will be able to do it herself, either through shutting down part of the station or getting another robot to do it for her (more on that in a moment). In other cases, Jacker will hack in to try to disable the alarms/locks of certain areas, but this isn’t without some attention being drawn, at which point Ghost needs to keep everyone busy until the job is done. The latter scenario takes place more than I’d like to admit, but it’s not an impossible situation, though it does present in varying degrees of difficulty. 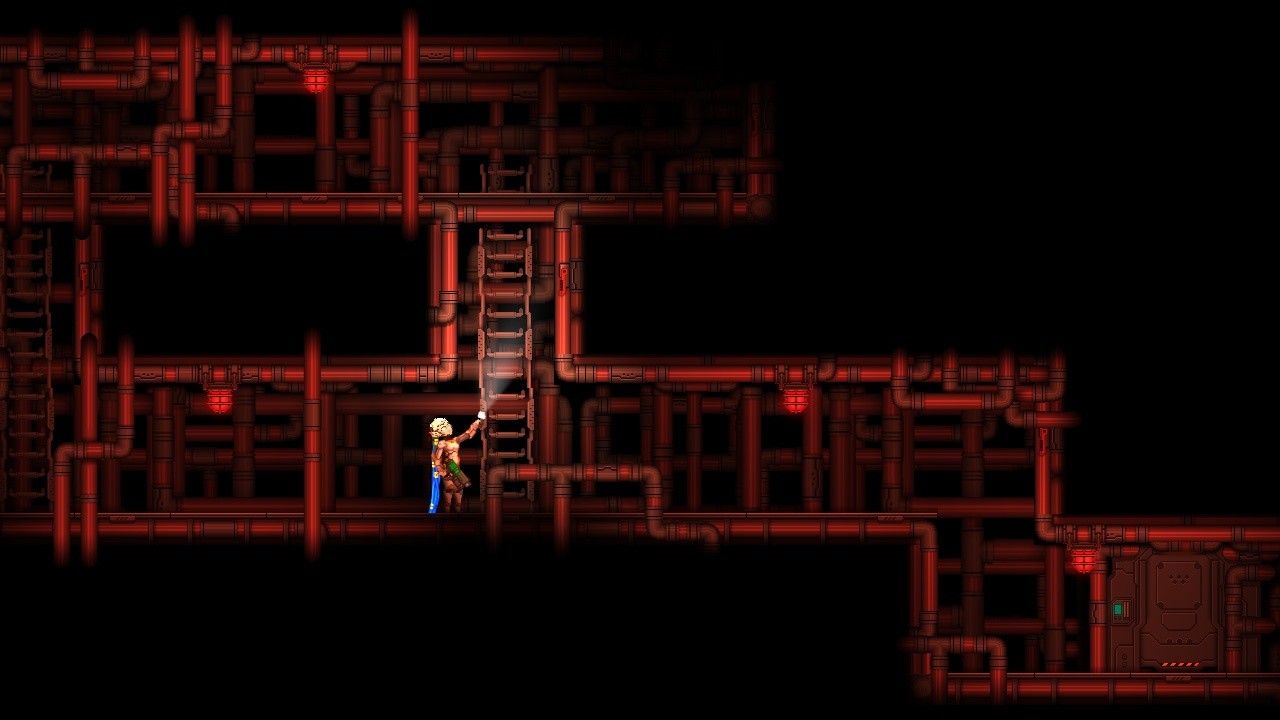 The possession mechanic is where Ghost 1.0 really stands out on a technical level. Ghost can leave her current Chassis at any point (once the tutorial explains the skill) and she can travel around the Nakamura station, exploring and looking for robots she can possess. Taking over other robots can either be beneficial in terms of access (reaching doors she cannot normally) or in firepower. The Chassis is incredibly capable, but having other robots do the dirty work for you sometimes just works out better. In either of these cases, Ghost has to make sure she’s tucked her Chassis away someplace safe and is at least a bit aware of its surroundings. You don’t want to abandon your body right where someone can walk up and shoot it: you’ll die all the same and need to be respawned at the last 3D printer you found. Yes, you just print off a new body. I thought that was awesome too.

Naturally, the game is brought to us by unepic_fran of Unepic fame, and you can feel that level of intense, insider kind of gaming that comes through despite this being a very different beast. Firstly, the RPG skill tree. It isn’t enough that you can add-on to Ghost through simple weaponry, but you have very, very limited skill points that can be dumped into different categories for different effects. Making dodging better, speeding up your shots, increasing health finds…the kind of game you choose to play can shine here. But, in addition, Ghost 1.0 is full of little inside jokes and nudges, including the Geeks. The Geeks are one of the best things that I’ve found in a metrovania game. Alright, you know how these types of games already ask that you be thorough and spend a ton of time going back and forth over the same places again and again to find the right way forward? How about if there are also a bunch of secrets that serve no purpose except for aesthetic value in a couple of potentially nondescript locations? Those are Geeks, and now that you know they exist, you won’t be able to not obsess about finding them. 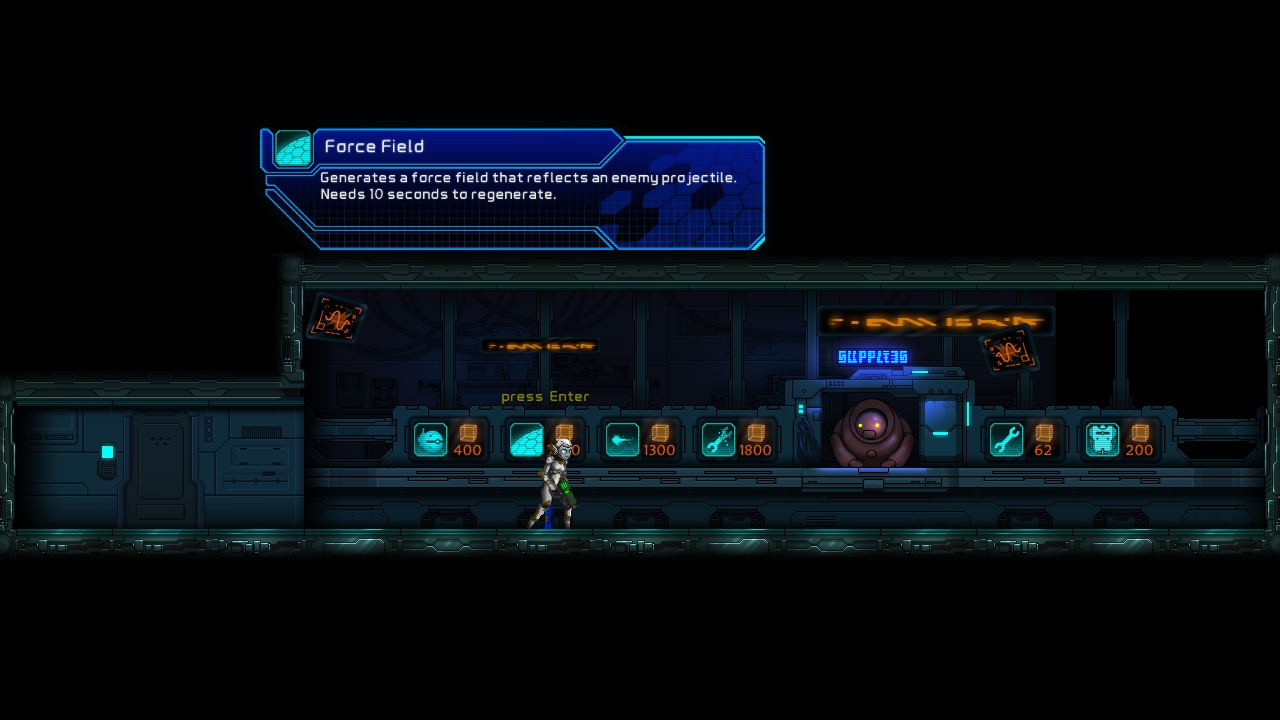 With all of these nuances and extra details, you’d expect the game to be ridiculously long, and you would be mostly wrong. Sure, I felt it dwarfed the length of actual Metroid games, but Ghost 1.0 is actually pretty balanced in terms of gameplay, missions and storytelling. By the time you realize something is wrong and maybe Ghost isn’t on the right side of things, you feel like you’ve explored a good amount of Nakamura, and have no problem moving onto a new location for new story twists. The dialogue is fully voiced and very believable, though I do recommend turning on subtitles for some of the exchanges with our sponsors who communicate from afar. And everything is paced out incredibly well: there’s no moment when the story feels like it’s dragging its feel or making something prolonged in terms of exposure. In fact, I would argue that this level of artistic interpretation for robotic mentality and moral science is exactly right and keeps things interesting, allowing players to get through the main story mode without much of a bog in reading.

Replay, on the other hand, is something that comes fast and furious with Ghost 1.0. Naturally, there are three levels of difficulty to handle for the main mode, difficulty that affects the frequency of items found, the necessity of items for getting to the next area and, of course, the tenacity of the enemies that you fight. But an unexpected and pleasant addition is the fantastic Survival mode, which gives the player the joy of playing this insanely detailed, overly complex game in roguelite mode. Randomized floor layout, item location, and appearance of bosses (did I not mention the bosses? There are bosses). This can also be done on three different difficulty modes, so you can actually have quite the lucky situation if you play your cards right. I did a survival run on easy and got about eight item drops in the first two rooms, becoming crazily overpowered for a while after that. It was fun! Of course, these survival modes are still significantly longer than the average play of A Robot Named Fight, so don’t go deleting your other games just yet.

In spite of some really bizarre button layouts (I don’t know why ZL works as a jump button, but whatever), Ghost 1.0 is another amazing indie addition to the Nintendo Switch. A sprawling, distinctly epic experience with multiple save slots, achievements and two very different modes of playing means that you’ll be able to run with Ghost, Boogan and Jacker again and again with very little to slow you down. Fingers crossed for some Mini Ghost in the future, but, in the meantime, the original Ghost 1.0 is certainly more than enough to make the average indie fan very, very happy.