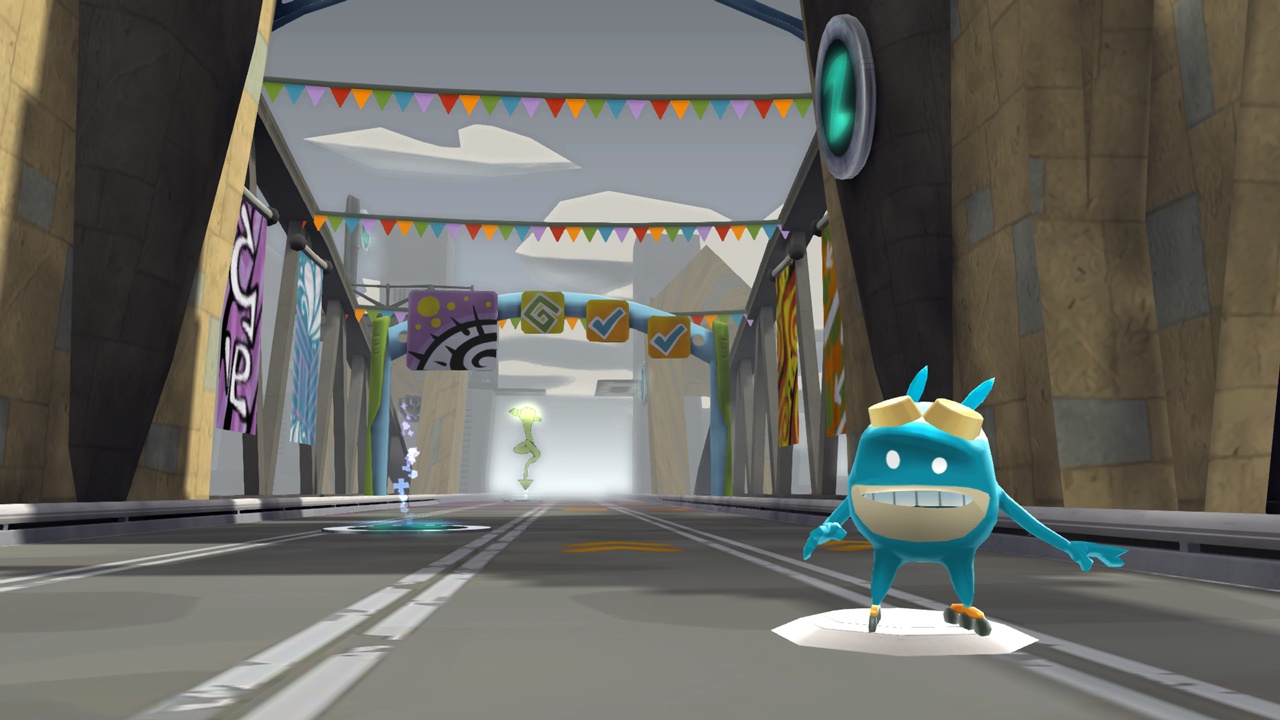 Sometimes, I really get the urge to go out and paint the town red, but sometimes, circumstances don’t always allow it. Well, thanks to the release of a remastered version of de Blob on the Nintendo Switch, I can go out whenever I want to, not only to paint the town red, but also to colour it yellow, green and blue, or whatever mixture of shades I can conjure up. Developed by Blitworks and published through THQ Nordic, this title first originated almost a decade ago on the Nintendo Wii. Now fully remastered, this game still retains the colour and charm that made it a crowd-pleaser on its original release, as well as boast a more refined control scheme. However, it also still contains a couple of minor flaws, although these never interfere to a point where they break the game or detract from the overall experience.

The story revolves around de Blob, an amorphous blob of paint and resident of Chroma City. After bearing witness to an invasion from the I.N.K.T. Corporation and their imposed rule of no colour, turning the cityscape a lifeless grey, our hero sets about returning a bloom to the neighbourhoods, freeing its inhabitants, the Raydians, and battling the grey-clad forces of Comrade Black and his band of Inkies. After joining the Colour Revolutionaries, a band of underground resistance fighters, de Blob embarks on a journey that sees him flip, bounce and smash his way through a variety of ten lengthy levels, adding a splash of colour as he goes and bringing freedom to the city’s oppression.

In order to achieve this, you need to utilize your ability to suck the colour from the wandering paintpot-like machines that wander the streets, painting the scenery and buildings around you, until the neighbourhood comes to life again amongst a fanfare of ticker-tape and the bright tones of Raydian colour. By rolling and leaping from building to building and rooftop to rooftop, you spread whatever colour you are carrying, all the time being aware of any potential hazards that lay around you, from ink pools, electric shocks, hot plates and gun turrets. 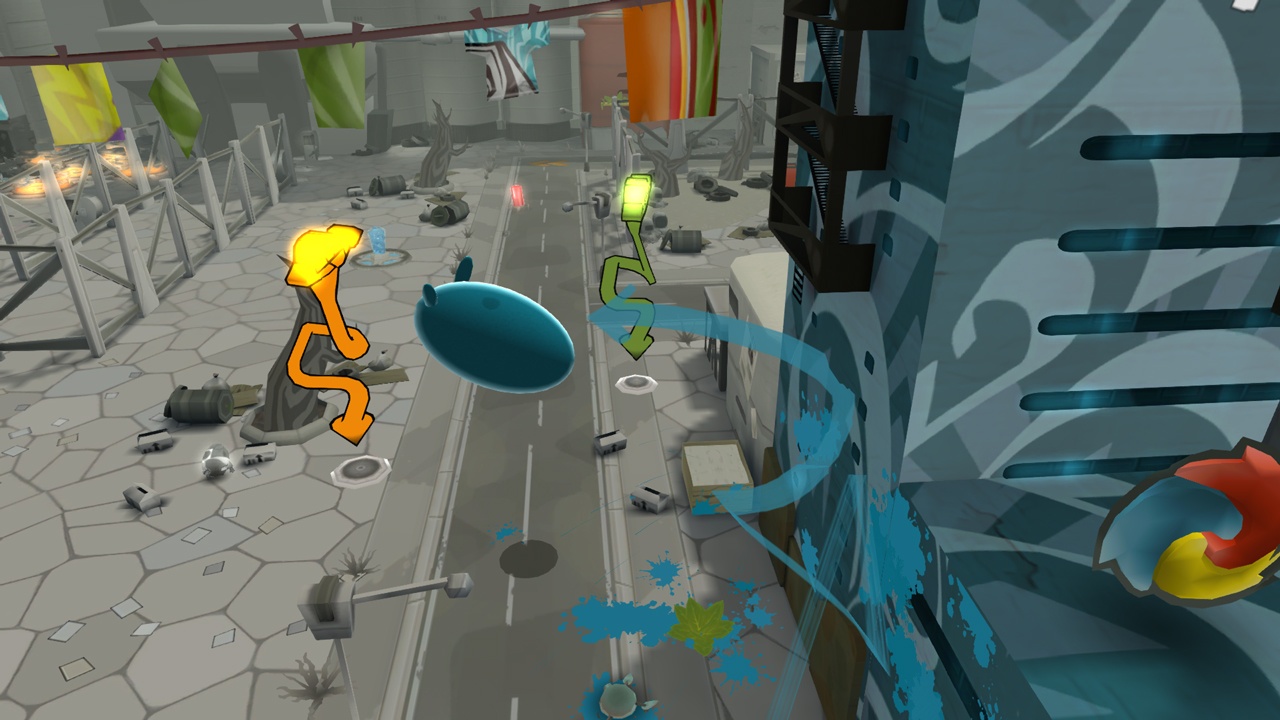 By painting a certain percentage of the current levels cityscape, or by fulfilling a series of objectives, you can spawn colour points that paint large areas of the map, or reveal buttons that open up gates into the next area of the city that needs some colour brought to its streets. The mechanics of its gameplay can feel a bit stale, or repetitive at times, however, each of the levels contains a certain amount of charm, personality and themes that simply keeps you playing.

It’s this overriding charm that makes up a lot of what de Blob has to offer. It’s campaign, or story mode, is presented through a series of gorgeous cut-scenes that holds an appeal very similar to Dreamworks’ Minion characters from Despicable Me fame. My personal favourite element to the game, is coming across the other characters from the resistance group as they pop from the drain covers, speaking to me in a style of voice-over that is simply heart-melting and extremely humorous in its execution. The sound production is also worthy of a mention here, with a selection of tunes to personalise your experience, and a mechanic that produces beats and tones with every jump or painted building that matches the rhythm of the currently selected music. It’s a very clever mechanic and one that simply adds to the charm of the title.

Although each of the levels have a time-limit imposed before the I.N.K.T. Corporation discover your location, this is a game that can be played without any immediate urgency; allowing you play at a comfortable pace in which to take in the sights, or revel in the charms of the city-folk. However, should you require more than that, a Free-Paint mode eradicates any imposition of time. Saying that though, there is a healthy amount of time-additions scattered throughout each campaign level, from completing neighbourhoods and tasks, to make it’s time limit easily acceptable. 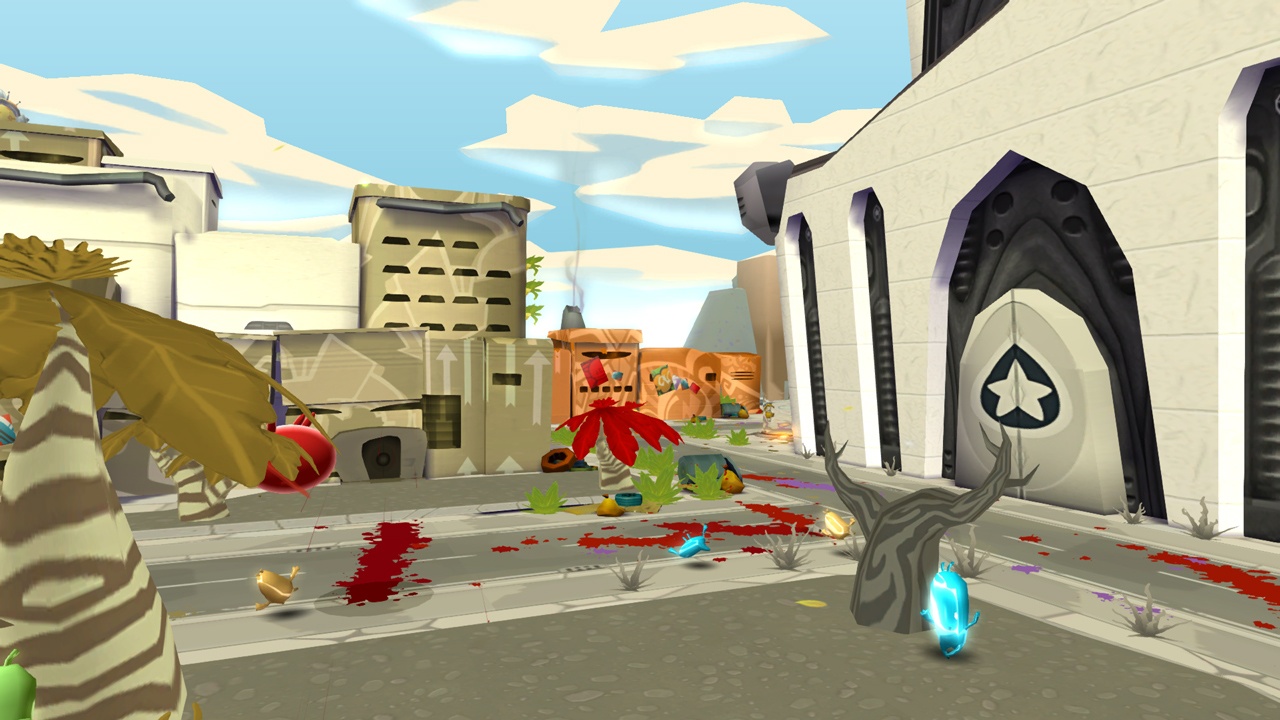 Throughout each of the ten levels, lay ten objectives, or achievements, that need to be fulfilled in order to reach the games one-hundred percent completion. These can range from painting all trees, complete coverage and freeing all Raydian citizens, as well as many more. This gives the game a replayability value, as you revisit previously completed levels to finish everything within them, something for the purists and one-hundred percenters out there. However, completing these levels also unlocks a number of further activities that can be completed within each area; often presenting a more difficult challenge and tighter time constraint.

As well as the campaign and free-paint modes of play, de Blob also comes with a spattering of local multiplayer games for up to four players. They all follow a simple premise that involves painting the city-scapes together, racking up points to decide an overall winner. However, one particular mode sees you painting over each others building, much like in the mechanics of Splatoon, offering a fun experience for all involved.

Overall, de Blob offers a quality experience that almost matches the same level of production that only Nintendo can. Despite its age, its playability still remains fresh and its charms easily outshine anything else on the market at the moment. If it has any niggles, then it has to be the implementation of its camera mechanics that feel sluggish at the best of times. It doesn’t really present a problem, but is still something that is noticeable as you play. Despite this though, this is a great title for young kids and big kids alike and its multiplayer element makes it a perfect family game too. It simply oozes a charm in a lot of its mechanics, enhancing the playability of the game, as well as presenting a general aesthetic that is easy to fall in love with. If you’ve played the original version on the Wii, then this remaster is well worth revisiting. However, if like me, you never got around to playing this game before, then this is a title that will sit nicely within your collection and will more than likely be a title that keeps you painting for a long time to come.