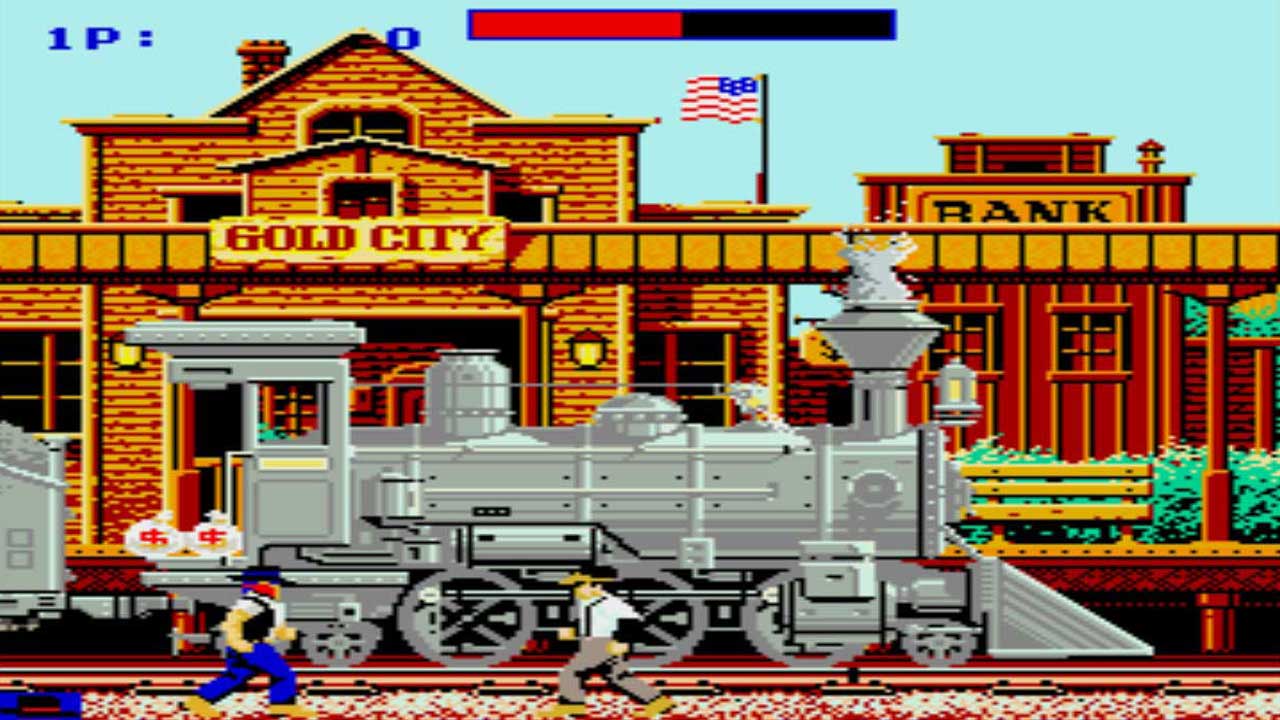 Express Raider is such a curious little title, I can’t even begin to create a proper introduction for it. When you take a look at it, it feels like some kind of anachronistic artifact that an archeologist discovered and simply cannot explain. Like, if you finally unearthed an ancient tomb in Mesopotamia that dates back three thousand years, and there were careful instructions for making your own fidget spinner inside, you simply couldn’t figure it out. Likewise, in reverse, if you took a spaceship to a far distant planet and found the species there were advanced in every single way except they still lined their homes in asbestos, you might scratch your head in utter confusion. Express Raider is that kind of interesting, almost provocative kind of confusing, and it’s definitely worth a play and a look.

The purpose of Express Raider (which came to us from Data East in 1987 and now is resurrected by the arcade necromancer, Johnny Turbo) is an endless sort of game with no official ending. This already is a bizarre start: endless arcade games like Pac-Man or Donkey Kong seemed to go the way of the dodo in the early 80s. By comparison, 1987 saw things like the first Street Fighter and Pac-Mania drop, games that set trends and were bleeding edge. Express Raider, on the other hand, takes the already dated “endless” approach and adds another facet to it: cowboys. The purpose of Express Raider is that you’re looking to rob a train, and you’re going to do it alone, in spite of everything, and I guess the game must take place during the Gold Rush because why on Earth would you rob a train in the 80s dressed as a bandit? You have two different game modes: side-scrolling train robbery in a brawler approach and side-scrolling train robbery in a shooting gallery approach. Succeed in both and you get to…do it again. And again. And again until you decide that you’ve either had enough, your score is high enough, or you genuinely hate the Wild West and never want to see it again. 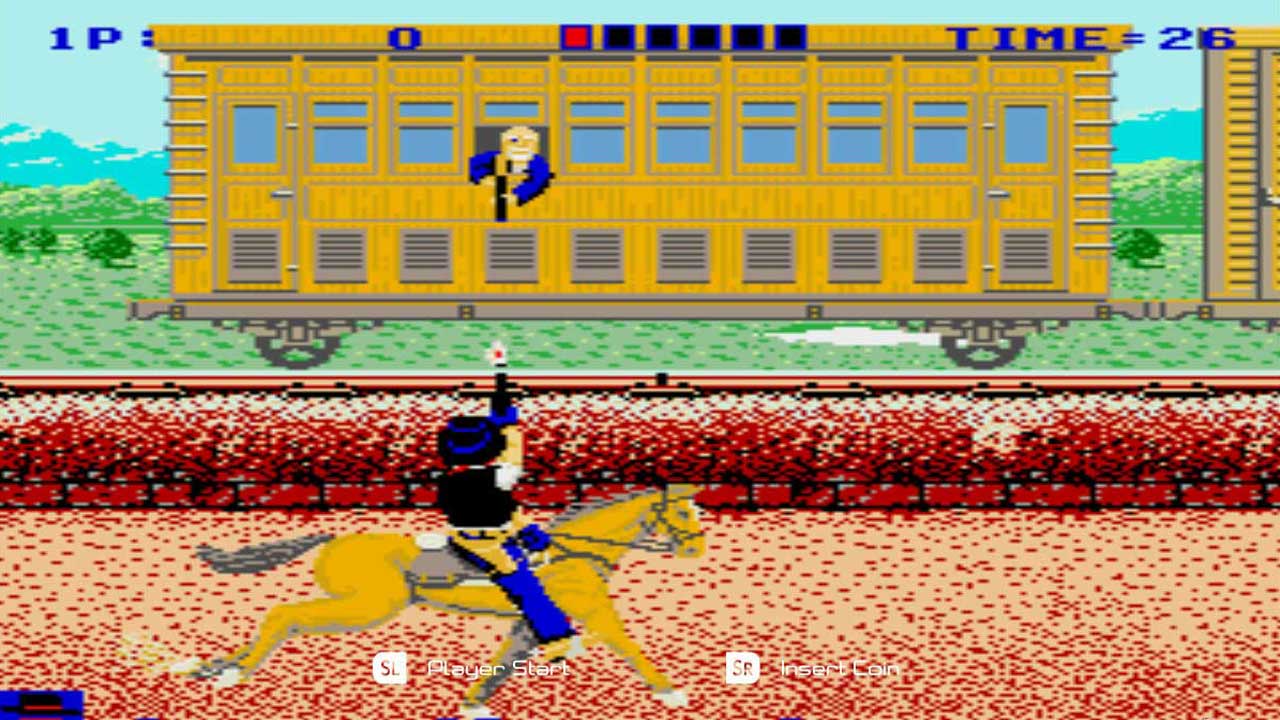 To it’s credit, the two sequences that you have in Express Raider are pretty fun and creative. Everything is under a time limit for the brawling. If you’re not fast enough in dispatching the first conductor guard with punches and kicks, the train leaves without you and you fail. If you take too long fighting off one of the people atop the train cars as you make your way to the engine room (you know, where trains traditionally keep all their valuables) then someone sets off a bomb and uncouples the cars, at which point you…fall to your death or something. It actually has a really cool sense of urgency about it: your health meter is based around doing damage without taking it, and you can’t progress to the next car unless you can score a knockout. This means if you get the drop and start the fight on your own terms well enough, you can blaze through the train pretty easily.

And the different mobs atop the train are kind of fun in their own way as well. You’ve got random people who just like to fight on top of trains. You’ve got someone with a gun who conveniently shoots in intervals that you can duck or jump over depending. And I love the dude on the coal stack who throws coal at you if you’re too far away and hits you with a shovel when you get close. It’s creative and borderline funny in presentation, and you genuinely need to work out strategies if you want to take care of things in a decent amount of time. Express Raider understands that, to properly capture the moment and ideas of the train raid, everything is under pressure. Duck incoming signs, don’t let bombs explode, get the loot and get off the train. This part of the game I absolutely adored.

The shooting sequence, however, felt a lot more mechanical and boring in comparison. You’re riding on a horse, and you gotta shoot enough people to justify taking over the train while they shoot at you. There’s a button to duck incoming shots, but you don’t really need it as long as you know your hitbox and move your horse fast enough. Once you get your perspective situated, it’s super easy to simply shoot the guys as they pop up, don’t shoot the lady who’s inexplicably hanging out in the boxcars with the armed hobos, and occasionally shoot a seagull that is holding a sack of money. Why does the bird have the money? Because birds deserve a taste of the high life too, JOHN. But it really feels a little flat having to target the gunmen with just your joystick instead of, say, motion controls. Still, have to maintain the original arcade experience. 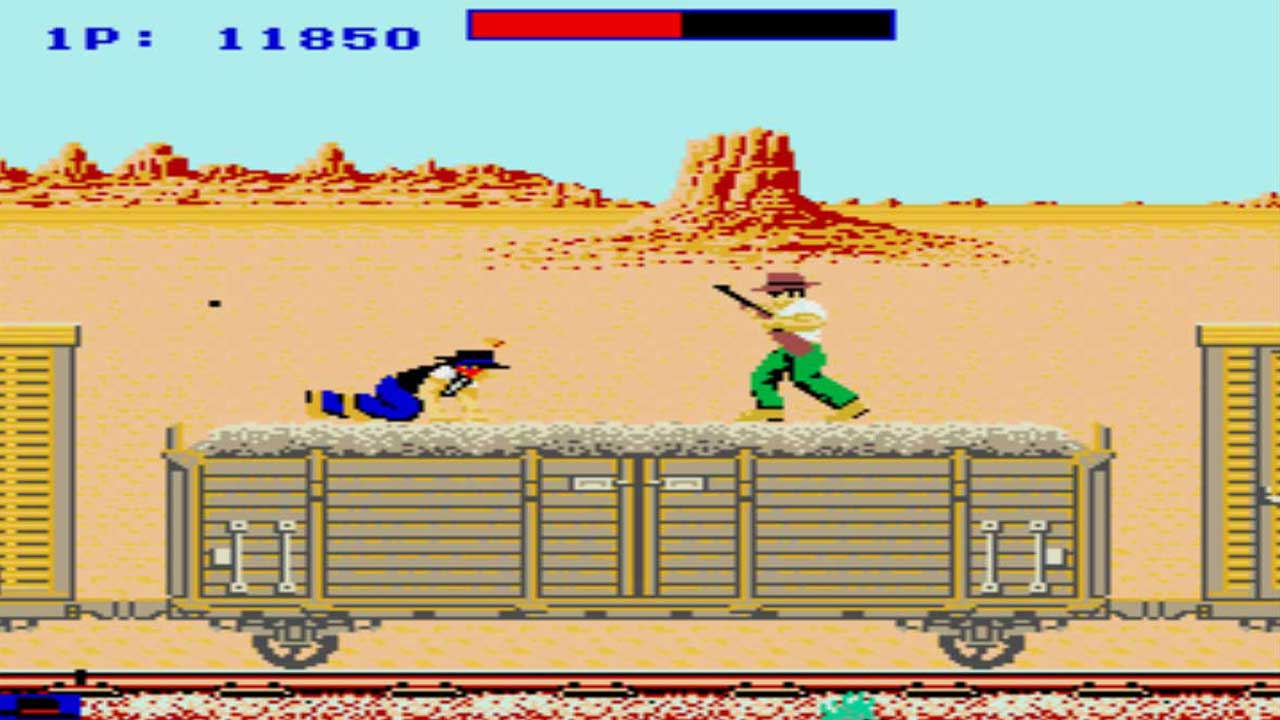 And, unfortunately, that’s about it for Express Raider. Once you run through those two scenarios, you get to restart and do them again, only things are more difficult now. The gunmen pop up and shoot faster, the brawlers on top of the train are harder hitting and more accurate, and it feels like there’s less time to deal with things before the bombs come. It’s such a throwback to the old days of the arcade that I’m surprised it isn’t dated significantly earlier. Then again, a lot of the Johnny Turbo Presents titles have been more in the 90s, so this marks one of the older ones that have been published. It certainly has some merit: there didn’t used to be satisfying endings or creative ways to finish a game. It was just a Sisyphean task of pushing back against the train keepers again and again until you couldn’t push back any more. The main problem with that is a lot of people who’ve been doing these arcade classics will instinctively pop in another quarter to continue the game, and that will effectively erase your score as you “continue” the mission. Instead, players are going to want to make sure they operate on a single quarter, enter their high score name, and then reset the rom so they can begin fresh and untainted.

Again, it’s truly bizarre to have a game from the late 80s with game stylings of the early 80s and what feels like inspiration from the mid 60s in terms of plot and engagement. But Express Raider is interesting, if repetitive, and it certainly brings a unique perspective on how to make the arcade high score chase a bit more interesting. Instead of faster ghosts and more fruit, it mixes up two different play styles entirely and challenges the player to deal with them in tandem while the game ramps up the difficulty. If you wasted a ton of quarters on this back in the day, here’s your chance to get back your dignity in a big way. And if you just want to see what the arcades truly held in times when home consoles were taking over, look no further: Express Raider provides.