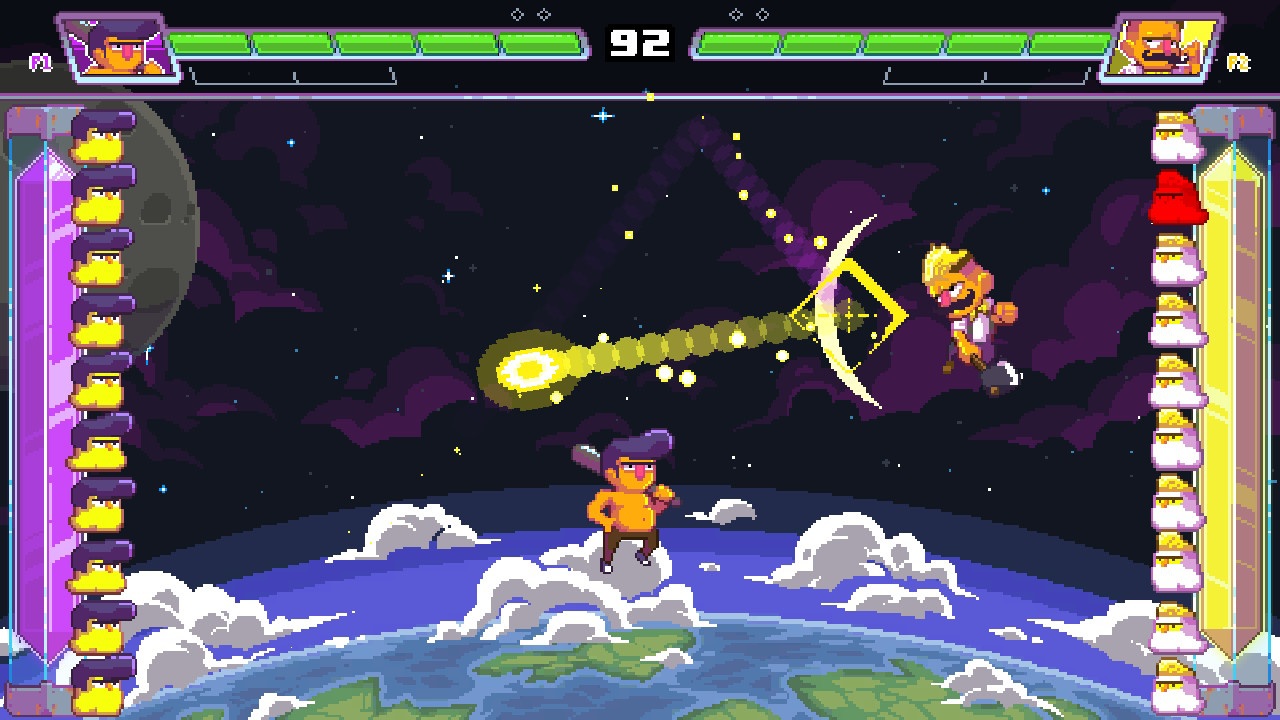 Pong. It’s crazy to think that Pong was originally advertised as electronic tennis, and now we have games that capture the spirit of tennis down to the grass itself and Pong almost feels like it’s own genre now. Not quite table tennis, not quite a sport, it’s one of the building blocks that made home video game systems both profitable and feasible. Now, more than forty years later, we have machines that would have flabbergasted computer engineers at the time, fitting unthinkable amounts of RAM and memory with ballistic CPUS in devices scarcely bigger than a slice of bread. But we still have variants of Pong, alive and well, but we’ve added a few more bells and whistles to the process. This, dear players, is Ultra Space Battle Brawl.

Ultra Space Battle Brawl (or USBB) is the insane tale of a competition that rages on across the cosmos, where players come from all over to compete in a maddening, high-energy game of survival, timing and fast buttons. Mojiken Studios had the brain wave to combine Street Fighter style character selection and powers with intense striking combat and slightly unpredictable precision. The rules are simple: break through your opponent’s barrier and smash his crystal before time runs out. In the process, you’ll learn a lot about yourself as a person, a child, a warrior, a mother, an eagle, or otherwise. Are you a defensive player who enjoys hanging back and aiming intense volleys at holes in your opponent’s defenses? Or are you more of a berserker attacker, dead set on being on top of the ball and slamming it back again and again into an opponent’s face until there’s nothing left but cosmic dust? You and you alone decide your playstyle in this over-the-top, ridiculously fun sports game that reminds me I don’t like real sports, but I love impossibly chaotic eSports.

Once you load up your first game of USBB (either in traditional versus mode or single player story mode), you immediately get the full sense and atmosphere of the game. This is something that knows it’s totally ridiculous, but is trying to deliver a dramatic and serious presence while desperately trying not to crack a smile. Everything from the over-the-top cartoon characters to select from to the serious and driving soundtrack gives you that pinnacle performance moment of a 1980’s music video or one-off tv special. The color scheme is a great mixture of bright and dynamic tones with some seriously muddled choices of skin tone, and the whole thing pops when you’re floating out in space, defending your crystal. How can you breathe in space? Remember, this is just a video game, you should really just relax. 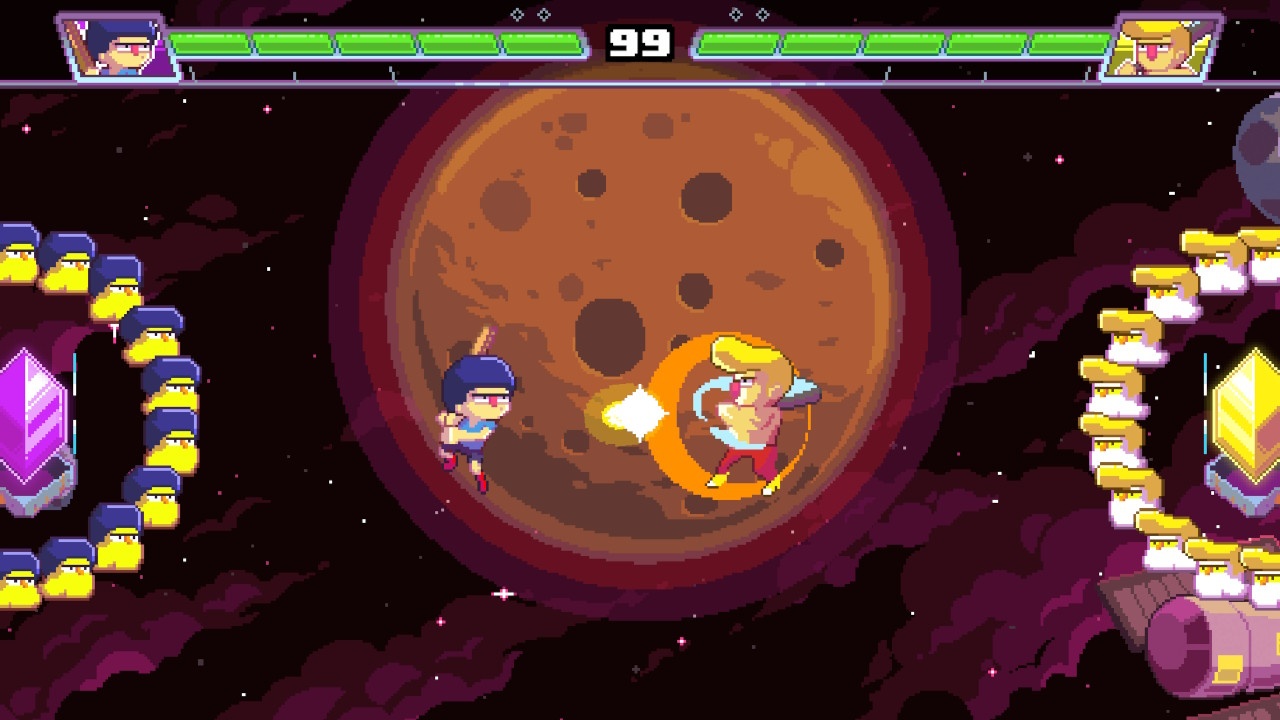 Interestingly, the game mechanics of Ultra Space Battle Brawl are anything but overly simple. First, you have the core gameplay, which actually ratchets up to an incredibly break neck speed in a short amount of time. On the surface, you move and hit the ball: theoretically basic. Then you start to realize certain things about how the game interacts, and the rules that come forward. You have dash buttons for L and R, but the dash is an imprecise science, and it’s easy to over/underestimate where you need to be. Then, you start to realize there is volley assignment: the ball changes color depending on who hit it last. So, let’s say you wallop the ball and it turns purple. Now that ball will affect the opponent’s crystal and barriers, BUT it won’t hurt your side of defense whatsoever. So sometimes you can use a good strike to not only line up a great second wave attack, but also give yourself some much-needed breathing room. For a title to actually develop some solid strategy in such a simplistic manner is pretty impressive, and actually makes for the short and long game to be more intense and interesting.

Additionally, there’s a good balance to the ultra shots that each player possesses. In the description, Mojiken mentions that they’ve taken nods from Street Fighter, and it’s not just in the wide variety of bizarre character designs. There’s also the matter of the limited types of attacks you get whenever your character powers up their ultra gauge (usually through taking minor damage).  Each character is different, working from those that are strictly offensive to defensive to a nice blend. Some powers are kind of wonky and less than impressive. For example, the “main” character, Djarwani, has this kind of “power strike” that allows for big hits that travel faster and hit harder, but it’s not that impressive overall. Nyammo’s air slash can potentially hit the ball from a distance, but it’s simply not as accurate as you’d imagine. By comparison, things like turning the ball invisible, smashing the ball into two separate and equally deadly spheres, or making giant, floating walls seem significantly more useful. Indeed, there was one was battle with Yayuk where my ball got trapped behind her walls and my crystal and the game was over before I could blink. 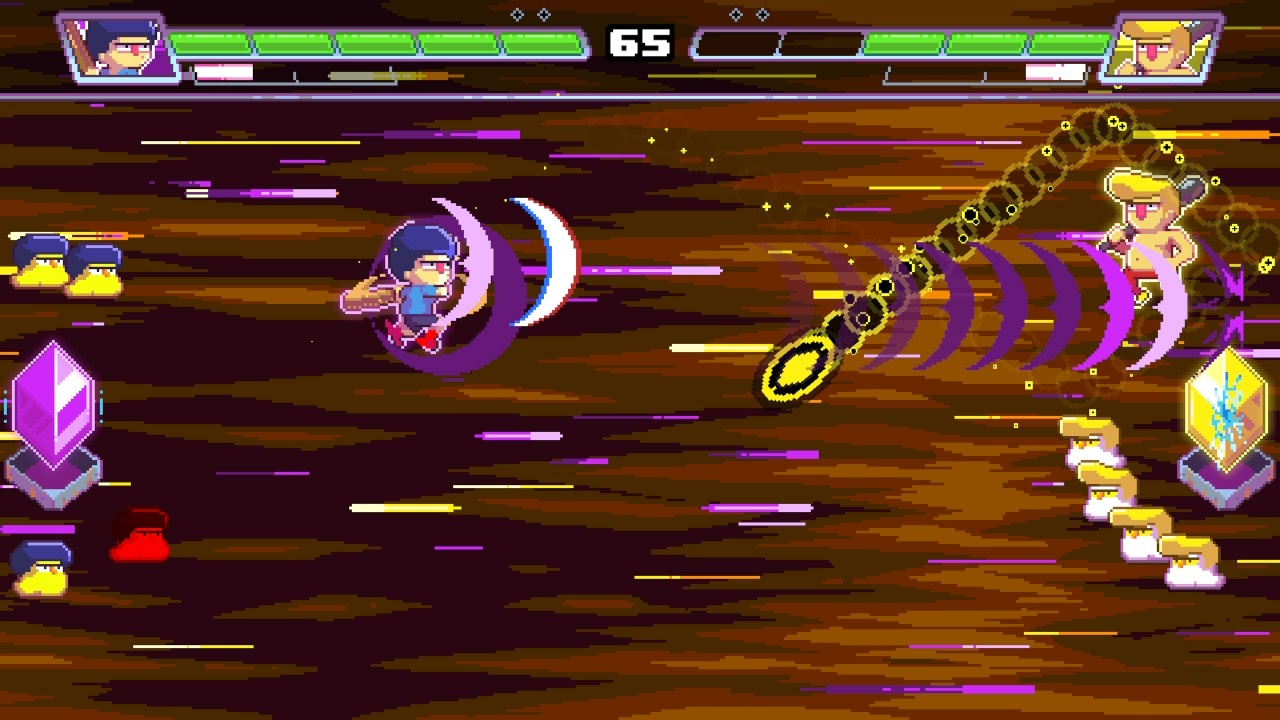 As much as I love the multiplayer mode, the single player does remind you how brutal AI can be. USBB does it’s best to try to gradually increase the slope of this game, but it’s really a slippery, painful situation due to the sheer nature of the game. The idea, the slogan even, is that fast fingers win the game, and this is absolutely true: mashing the strike button more quickly means you get to take home the trophy. But the AI has the advantage of not having fingers, and this manifests itself incredibly quickly in the story mode. After the first two opponents or so, the difficulty ratchets up significantly, with ultra aggressive characters (particularly Bodi) trapping you in the corner and just hammering the ball until the STRIKE logo appears. You have to constantly be on your game with this thing, meaning that you learn to take a strictly offensive stance on things. While this sounds like it could be fun or interesting, you lose the appeal of the game’s strategy when it simply comes down to “button mash better.” At least in multiplayer you have the joy of balancing things.

Lastly, yes, the multiplayer is fantastic, with up to four characters on the screen at once, you have any combination of matches (1 on 1, 2 on 1, etc.) to make the ultimate challenge, and the havoc of it all is impressively fun. Friendly fire isn’t something you need to worry about, so don’t bother trying to be the single against a doubles pair unless you’re REALLY confident about your skills. Additionally, try to remember who’s on your team: good communication and synchronicity can keep matches going straight to the buzzer. This is a game that will bring out the best of people yelling at each other between laughter,, and the retro graphics and appeal certainly lean into that idea.

Ultra Space Battle Brawl may not be the most logical or story driven title of our time, but it’s a damn fun experience, and one that has plenty of replay value. If you have even one other friend to throw a JoyCon to, you can have an absolute blast trying to figure out how to aim, when to hit, and what to do when you’re being hammered silly in a match. It’s too damn hot outside for tennis: stay in and do something in space.