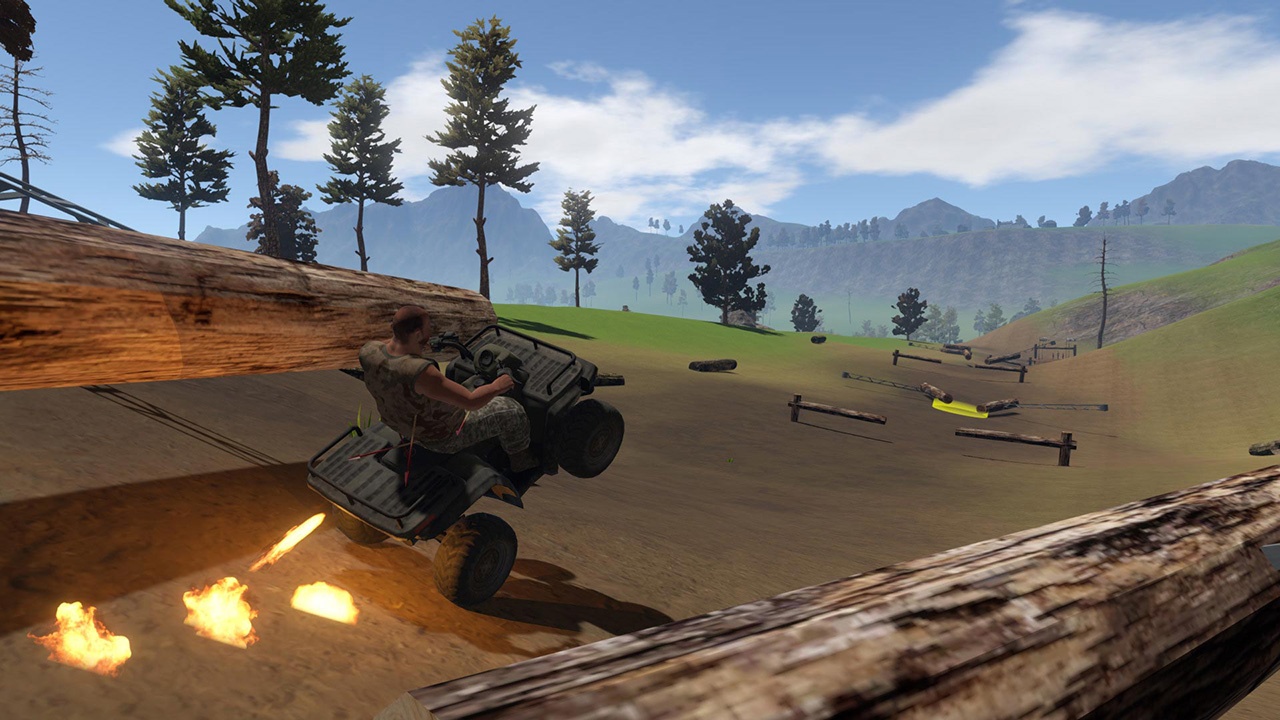 Okay, real talk: I deeply enjoyed the Jackass television show. Seriously, as awful as the imitators were on YouTube and as deeply disgusting as some of the stunts were, there is an undeniable appeal to people attempting stupid stuff and getting hurt. They were professionals, in a sense, and they really made a great name for themselves in the early 00’s with some of the dumbest, most dangerous things imaginable. Naturally, years later, every single surviving member carries some irreparable damage, but they regret nothing for their choices (mostly). The point is, it’s easy to see where Guts and Glory originated, and why the developers thought it was a good idea. And, in some cases, it is, just not in all of them.

Guts and Glory is the name of a TinyBuild published game, developed by HakJak Productions, which is a one person team. In Guts and Glory, you must take control of one of a number of contestants – cyclists, motorcyclists, drivers and, strangely, a propane powered flying lawn chair – to meet a number of objectives on an open world-esque driving course. Along the way, you need to cross a series of non-negotiable checkpoints before ultimately arriving at the goal. Already sounding a little strange, it becomes even more bizarre when you realize that every course after the first couple is positively, unapologetically deadly. Landmines, spiked walls, cannons and archers are just some of the “obstacles” that will crop up, and you literally have no defense against them other than to not get hit/not hit them. There are a few things where you might be able to sustain just a bit of damage – clip a buzzsaw and lose and arm, for example – but most encounters will result in your death, often hilariously, and then needing to respawn either from the beginning or the last orange checkpoint, whichever was most recent.

As the title and the explanation I just gave you suggests, Guts and Glory is all about the gore. Even when you toggle it off in the incredibly bizarre options screen (more on that in a moment), you still end up with severed limbs, rolling heads and a red polygon that represents what you used to be before murder found you. Deciding to toggle on the blood and gore opens you up to a ridiculously over-the-top version of the game, complete with a slider to decide how much and how insane the blood spray and carnage will be. At the end of last year, James Franco did a dementedly funny bit on Saturday Night Live about a present wrapper who keeps losing fingers and whole appendages in the quest to wrap one present, showering everyone around in a  crimson fountain. At the best moments, that’s what Guts and Glory turns into: this disturbingly violent but genuinely funny rampage of utter destruction. 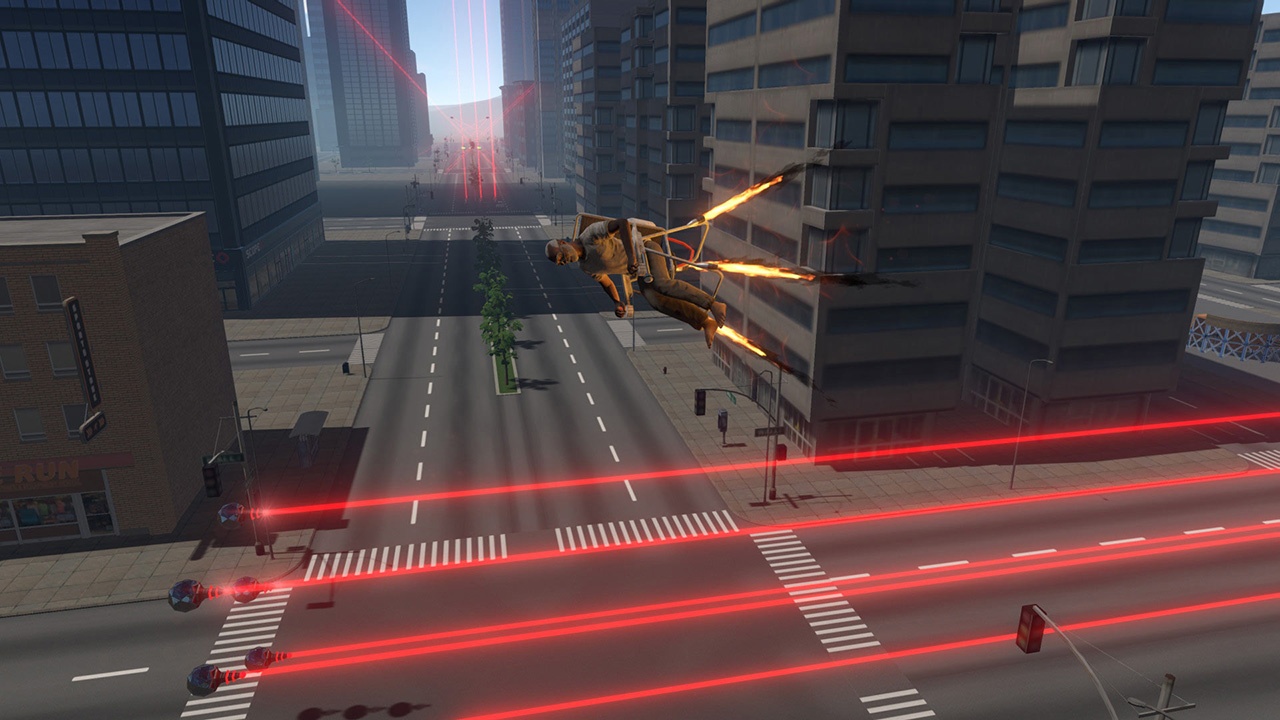 To its credit, when Guts and Glory accomplishes what it sets out to do, it does so in a marvelous fashion. The levels and stages get amazingly complex and absurd almost immediately, and the first set do a great job of giving you an idea of what you need to do in order to navigate and successfully move through the game. There’s dual buttons for boost (a limited, gauge-based speed enhancer) and a slow motion button that works three seconds at a time. Players can pull off tricks by doing flips and spins off different ramps to regenerate the boost meter, and your biggest opponent is the clock in a mad race to get the best score. The number of vehicles is small but versatile, with each one bringing a little something different to the table. From the Yang family in their convertible to an old woman channeling Evel Knievel, there are a ton of different ways to approach several levels (though some are specifically made just for one or two types). And, best of all, they all have their own awful but funny physics and damage. Junior, a hoverboard user, might be one of the most tame examples simply because he rides solo, but Jack and Jill are some of my favorites, as an old man who is inexplicably dragging an old woman around in a wagon on his bicycle leads to plenty of early, frequent losses. I know in the PC release these characters (some of them) were children, and I think HakJak needed to swap out the characters in order to appease Nintendo. No surprises there, and it doesn’t change the dynamic of the game. The only one I really didn’t enjoy was the lawn chair, because it controls like a goddamn lunar module and I’m straight up terrible at those kinds of ideas.

Guts and Glory clearly wants to cater to the streaming and Let’s Play crowd, if that wasn’t fundamentally evident from the game itself, but even more is baked into the initial release of the Switch version. Not only are there more levels catering to the different vehicles, but there are cameos from YouTube celebrities, or I suppose they’re celebrities, I’ve never heard of them but okay. Additionally, Kickstarters were able to vote and create additional objects that exist in the game, from obstacles like the Laser Cats to fun accessories like a Rainbow Unicorn Hat. Guts and Glory wants to be a game that is watched as much as it’s played, and, once the update comes to allow Switch users to at least play the community created levels (or maybe even make them themselves), it’ll garner a great level of success and impressions. After all, the game has already done modestly well in the online community as it is. 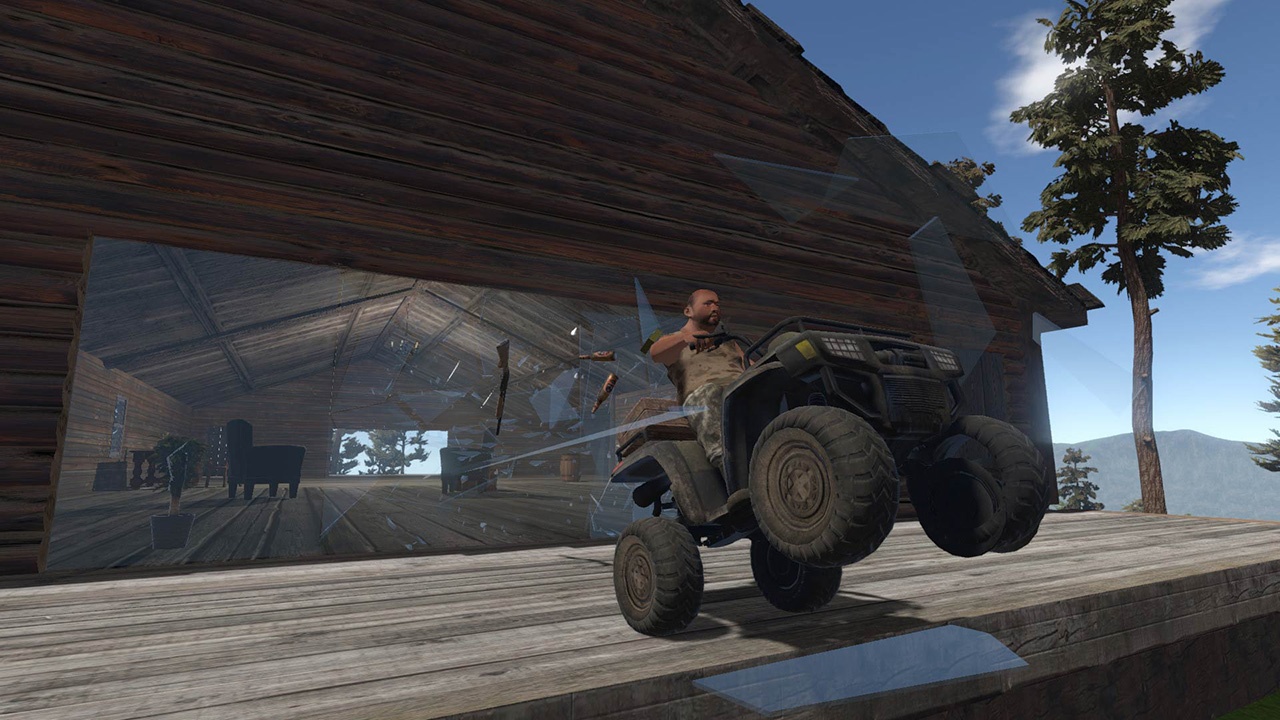 Unfortunately, the fun, gore and nonsense of the game is severely hampered by performance issues, almost to the point of unplayability. Load times are load times: I have tried to simply deal with the fact that some games draw a ton of stuff on the fly and it creates massive loading times, and that’s the way it is. But then I took a look at Guts and Glory: the damn game clocks in at 5.5 gigabytes. For comparison, Pokken Fighter, Gal*Gun2 and even Shaq Fu all clock in well under 4 GB. This game is monstrously huge, and it practically screams “unoptimized.” Besides bad load times, there’s massive amounts of lag that happens, which is unacceptable when dealing with a ton of killer obstacles that could be coming in from any direction. Sometimes it’s acceptable: when you hit a landmine, you’re dead anyways, so you might as well take a slow motion view of it. But when you lose a passenger or get clipped, sometimes you drop frames and stutter, meaning you’re basically lining up for the next kill shot to make sure it finds its mark. My only advice here is to navigate the bizarre options screen to try to toggle blood off, but that might take a moment: the options screen looks like it was ported straight from the PC and button mapping was only added as an afterthought when HakJak realized the Switch doesn’t use a mouse and keyboard.

Additionally, Guts and Glory has far too many bugs just in terms of general playing. I get that physics glitches and unexpected collisions make for funny moments on a stream or something, but it’s endlessly infuriating when you’re simply trying to play the game and shit is flying all over the place. There were more than a couple of times that I spawned dead. Screen faded in, and there I was, slumped over the steering wheel/handlebars, having already lost before I started. It really takes the wind out of your sails when your character is stillborn, and suddenly it makes sense why most of the kids were removed. Not the Yang child, however, which is interesting, but whatever. This was about the time that I realized my Switch was positively spewing hot air out of the vent and I had to dock it before the whole thing had a haemorrhage and I lost my prized possession.

I can see the potential in Guts and Glory, I sincerely can, and I think it’s a testament that I was able to play as far as I could before jumping around to other stages (seriously, screw Chapel Hill) in spite of the poor performance. I think TinyBuild has another fun and engaging game on the Switch, and they just need to get back under the hood and make it right. This, I feel, is probably their worst port to date, and I hope we can see that level of dedication to their products that they’ve shown in the past (Mr. Shifty polished up really well). In the meantime, Guts and Glory is in a hazardous state, and it’s hard to recommend it to anyone, even the longtime players who may be double dipping for the Switch. Wait for the patch.