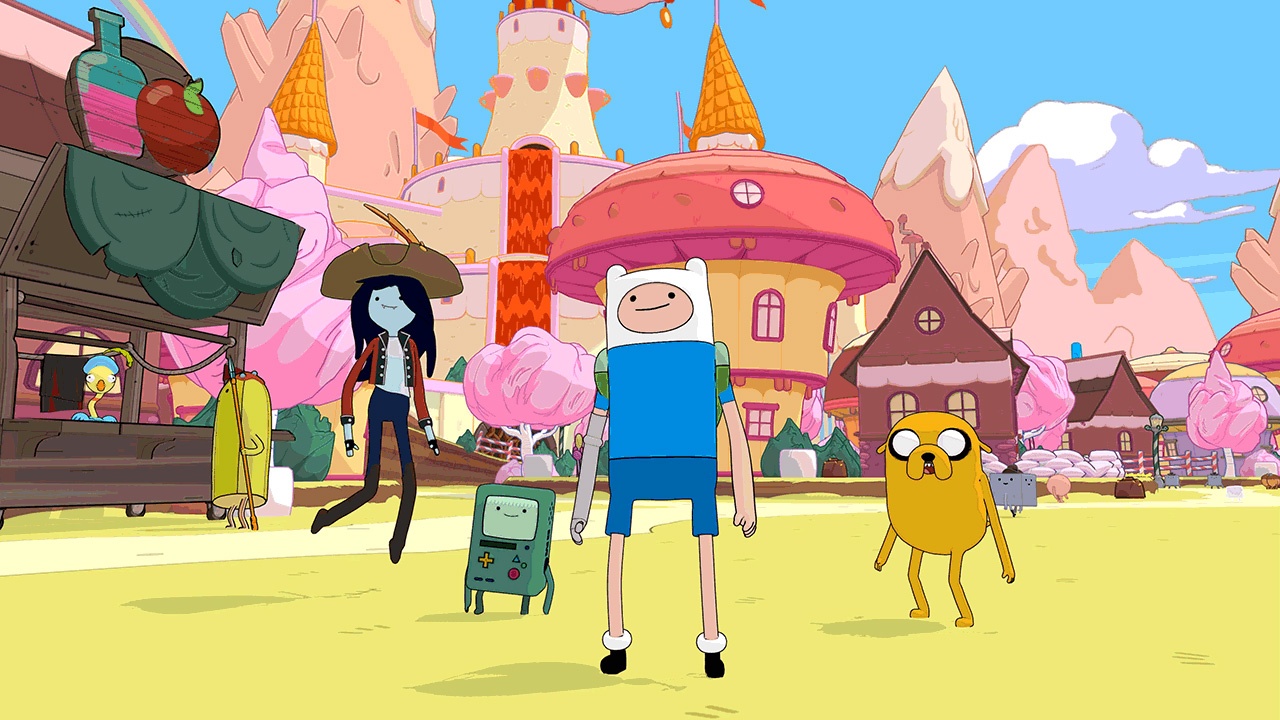 It can’t be denied that Cartoon Network’s Adventure Time series has become one of its most successful franchises on TV. Its slapstick comedy and mature themes has created a cartoon package that appeals to all ages. However, the same can’t be said for its iterations in a variety of failed video games. Although the humour remained, they never truly captured the same formula as the television series. Hopefully, all of that is about to change with the release of Outright Games’ Adventure Time: Pirates of the Enchiridion, as it gets a release on the Nintendo Switch.

This role-playing game follows the adventures of Jake and Finn, as they awake one morning to find the land of Ooo completely flooded. After accruing a seaborne vessel, or boat to you and me, the pair of them set sail for the Ice Kingdom, where they discover that the Ice King has accidentally melted his kingdom and lost his crown in the process. The two hapless adventurers offer to help the King and set forth on a voyage that sends them across the whole land, visiting a variety of Kingdoms to put right what the King has made wrong.

The first thing you’ll notice when you start the game, is the quality of presentation that is on offer here. Its graphical and audio representations perfectly capture the look, sounds and feel of the television series that we’ve all grown to love. You can’t help but smile as Finn and Jake swap sarcastic humour, travel to familiar lands and meet up with the complete cast of characters from the TV series; even singing sea shanties as the pair of them traverse the flooded areas from kingdom to kingdom. It all adds to produce a feel that is easily on par with its cartoon series. 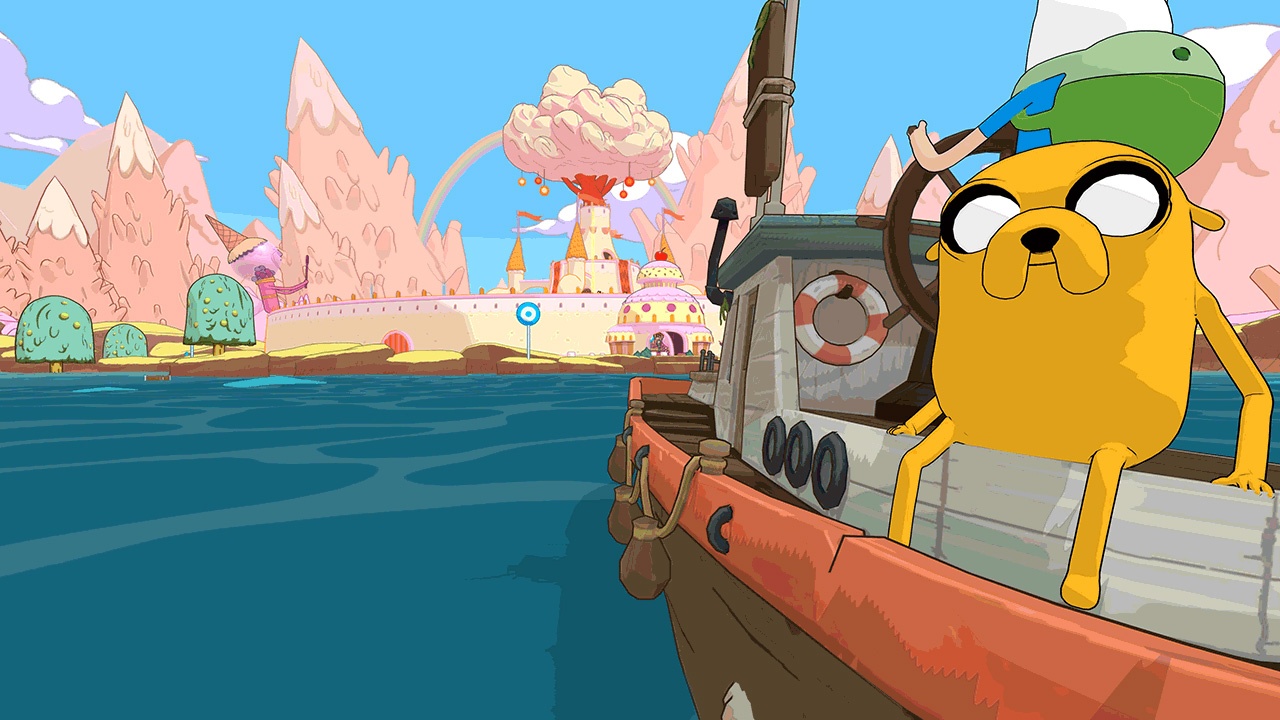 The core of the gameplay contains all of the elements that make up a role-playing game; exploration, interaction, puzzle solving, main and side quests, levelling up and combat. Despite its wealth of gameplay options, none of the mechanics on offer here are particularly deep. However, what it does do is strike a fine balance that produces a game that will appeal to younger players and just about holds enough to keep older, or more experienced, players engaged as well. Although its appeal as a television production contains enough to attract a wide audience, this can be difficult to achieve with video gaming; after all, there are a lot more mechanics involved in the design and production of video games and whilst not all of its elements are particularly engaging or rewarding, it still has enough to keep it afloat amongst the flooded scenery of Ooo.

Despite the basic elements of its mechanics, there are a variety of different options that help to break any monotony of gameplay. Its turn-based combat isn’t particularly deep or involving, with basic and special attacks, as well as a number of items that can be used, and a limit break that fills within a meter; unleashing a devastating and ultimately, satisfying method of attack. Take too much damage though, and you run the risk of your characters ‘flipping out’ rendering them uncontrollable as they begin to freak out in the heat of battle.

Levels of interaction also possess some variety, as Jake and Finn are often called to press for answers with their ‘interrogation time’ technique. Using a wheel of good cop, bad cop, you select what mode of questioning you wish to utilize, producing a good or bad result from your actions; thus acquiring the right or wrong answers to your question. There are also a variety of puzzles that need to be overcome, but these are rarely taxing on the brain; often involving finding relevant characters, seeking out alternative routes or completing a set of side quests in a find-and-fetch style of play. There’s nothing ground-breaking here and it’s this that leads to a basicness in its mechanics, especially for hardened gamers. However, if you’re looking for a good entry point into the game’s genre, or are a fan of the hit television series, then these can be overlooked to produce an hilariously fun, and often quirky, experience. 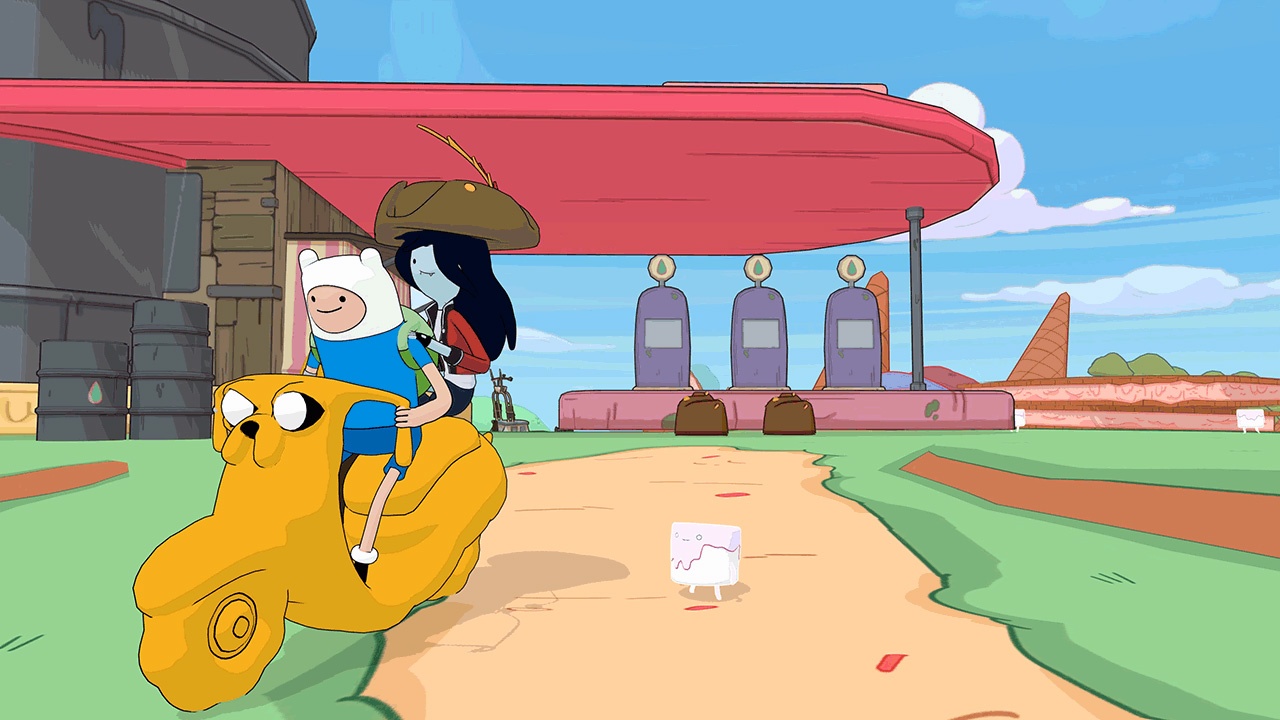 At first glance, the world map presents a vast area of an open-world for you to explore. However, the game’s design produces a more linear path in its adventure. Again, this adds to the basic mechanics of the game, but also produces an element of gameplay that sits nicely in a casual capacity upon the Nintendo Switch; making in an ideal game for on-the-go. At its core, you sail from kingdom to kingdom, completing a variety of tasks, battling pirates and interacting with key characters. It almost feels episodic in its execution, but then that just adds to the television style of presentation that the game holds so well.

Because of the nature of its style and in what this game is trying to achieve, this is a difficult game to score. It’s not a title that is going to appeal to everyone, but at the same time, there is going to be a specific audience for it; mainly because of it’s licensing. It isn’t necessarily a bad game, but then it’s not a broken one either. If you take away the element of its Adventure Time content, then this is simply a bare-bones adventure that wouldn’t score very highly in its recommendations. However, its licensing is its saving grace, especially with its well-written and humorous script, excellent voice-acting and overall charm; making it an appealing title to fans of the franchise.

Overall, Adventure Time: Pirates of the Enchiridion does offer a good experience; but be warned, it won’t be one that will appeal to everyone. It’s an ideal game for younger players and holds just enough appeal for fans of the television series, but it’s less-than-engaging mechanics and basic elements produce a game that isn’t going to entertain, or enthrall a more experienced gamer. That said though, its presentational values are top-notch, easily matching the look and feel of the franchise. So in that respect, if you can see past its short-comings and lack of any meaningful depth, then this is an adventure that you can have a good time with.