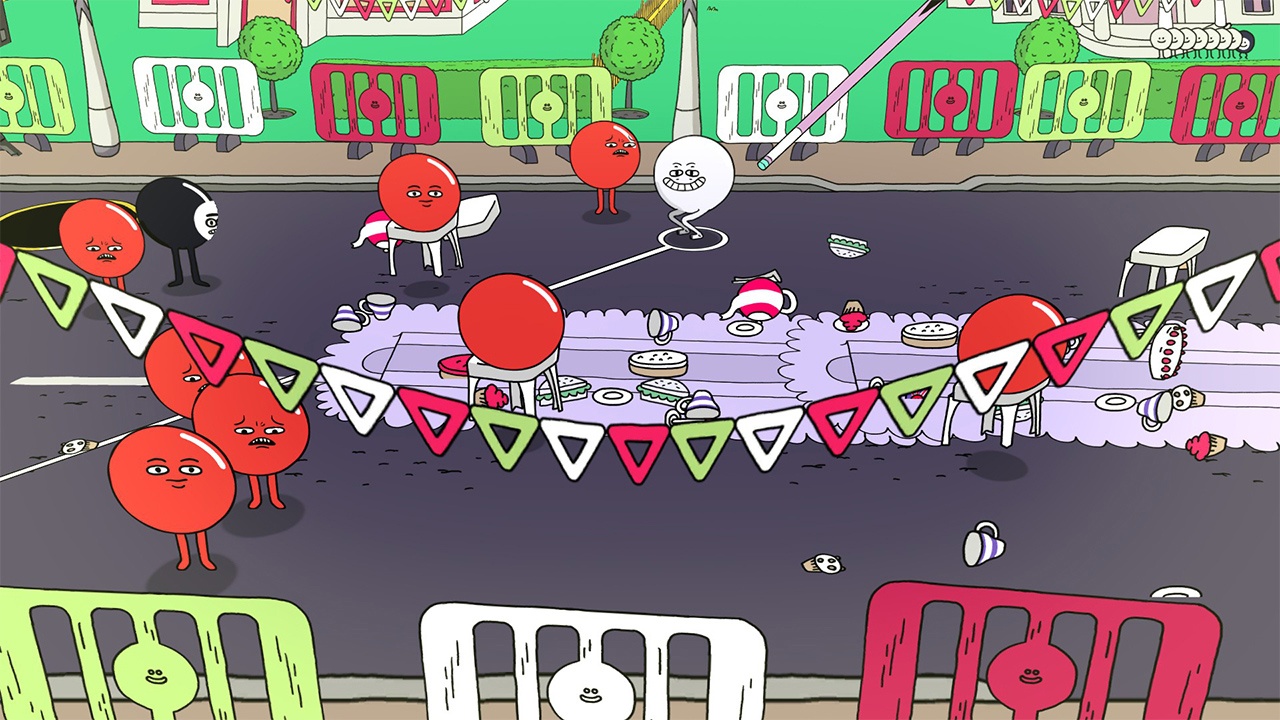 When you think of the game pool, you immediately envisage a variety of coloured baize, balls that are indicated by numbers, spots and colours and cues. However, with the release of Pool Panic, out now on the Nintendo Switch, any instantly invoked ideas or thoughts are literally turned upon their heads as Rekim and Adult Swim bring you ‘the world’s least realistic pool simulator’. Although its basic premise still follows the mechanics of playing pool, instead of playing in the surroundings of the local snooker bar, or amusement arcade, you’ll find yourself ruining camping trips, rounding flocks and causing all manner of chaos as you chalk your cue in this madcap adventure of pure mayhem.

Guided by a block of chalk, you set forth on an adventure that takes you through more than one-hundred levels of the craziest pool games you’ll ever get to play. Presented with a large map of the various landscapes, you play as a cue ball as you wander the land, performing all sorts of trickery to pot the coloured balls into the pockets. You’ll play on tables such as pirate ships, local ponds, camping grounds and chicken coops, as you clear each table, or level, in order to extend a spiralling tower that sits on the centre of town.

It’s a very unique take on the sport and one that is absolutely brimmed to the hilt with laugh-out-loud humour and a variety of gameplay mechanics that requires some very clever thinking in order to clear each table. Much like the proper game of pool, you are required to aim your cue, with the right stick, and pot the coloured balls into a series of holes, with shot strengths being determined by the R and ZR buttons. Once the field is cleared of the coloured varieties, you then need to pot the black and follow him into the pocket to complete the level. 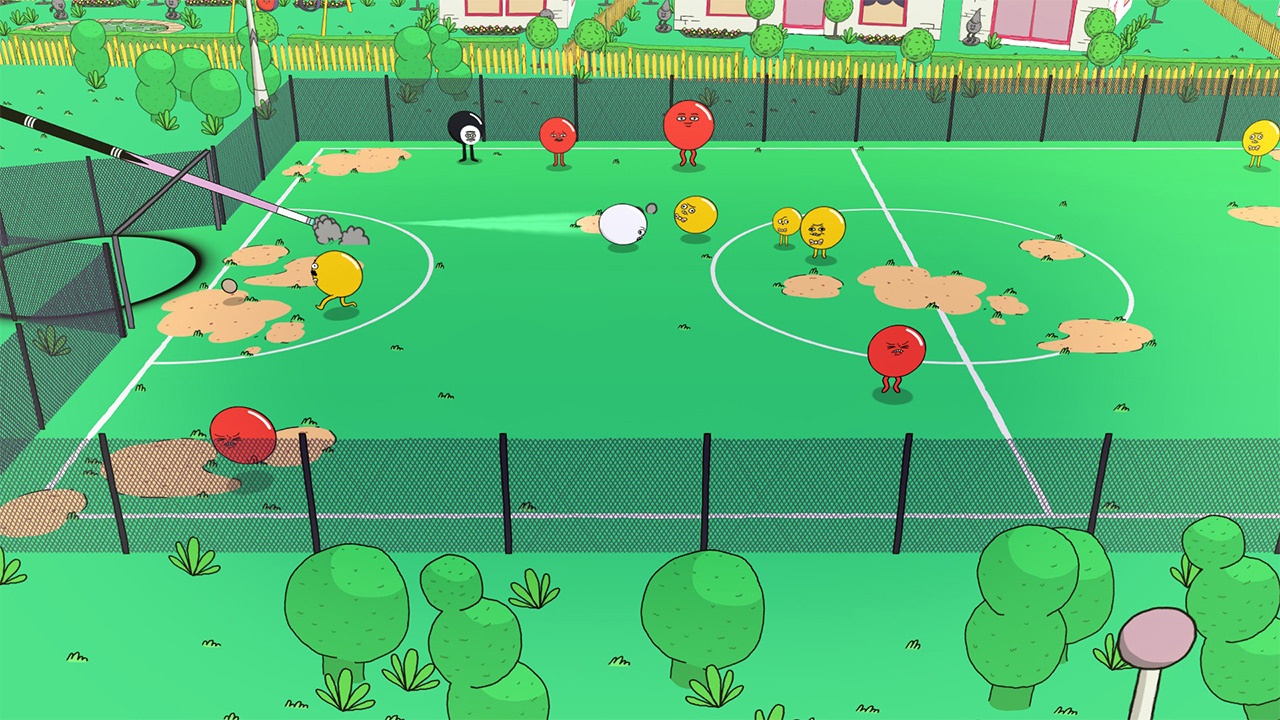 However, as you may expect, it’s not as straight forward as you think, as many of the tables or balls contain a variety of personalities and puzzles which need to be overcome in order to succeed. These can include environmental hazards, like wind for example, as well as a variety of balls that jump out of your way, grab you and throw across the table and even balls that hide in the most extreme places. In order to work through the level, you need to work out the mechanics of how each table plays, such as rebounding cushion shots to hit the dodging balls, raising flags that knock balls off a flag post, or ringing the serving bell to signal that the food is cooked, thus attracting a number of balls who are hiding out of reach.

It really requires you to think of what you need to do in order to clear the table. However, this is all contained within the constraints of a number of elements, such as time limits, shots taken, balls potted and number of times you pocket the cue ball. Complete each level within these constraints and you’ll earn the specific trophy for each of them. It all brings a sense of urgency and accuracy, as well as trying to figure out the puzzles contained within each of the levels; each one containing a huge variety of unique mechanics that simply ooze with atmosphere and always brings something unexpected to the table.

Everything here is particularly quirky. From the graphical presentation to the equally barmy soundtracks, this is a game that excels in its humorous qualities; you can be guaranteed that there’ll be something in this game that forces you smile and even laugh-out-loudly. For the most part, this is a game that delights in its madcap presentation and surreal environments in which you’ll find yourself and, whilst this is a lot of fun to begin with, a few glaring faults and inescapable gameplay mechanics soon produces a game that doesn’t quite chalk up to its early expectations. 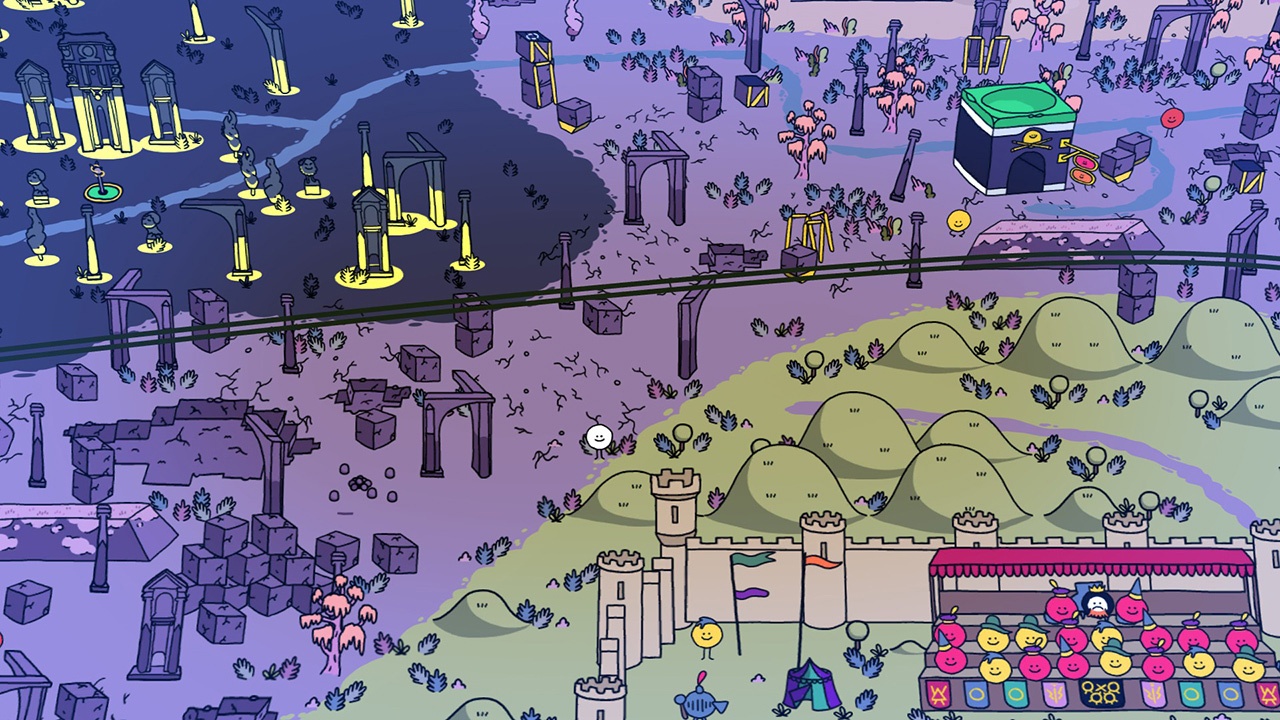 It’s biggest downfall, unfortunately, comes in the repetitiveness of its gameplay. Despite its best efforts to provide a uniqueness in its challenge with every table, the same simple mechanics apply from potting the balls into the pockets. You can’t escape it, after all, this is simulated on the sport of pool. However, it doesn’t take too long before you get bored with doing the same thing over and over, despite its variety. Each of the levels, or tables, are also viewed from one camera angle, which isn’t adjustable in any way. This can lead to some environments blocking your field of vision, leading to unseen holes, balls or puzzle requirements. As well as these, the game also contains a few technical hitches, such as missing balls, animation loops that get stuck and balls getting stuck within the scenery, making it impossible to hit them. With luck though, the developers will address these issues with a patch, although it still can’t escape the restricted camera views and repetition within its gameplay.

Despite these problems though, everything else play pretty smoothly with responsive controls and nice ball physics. However, a lack of any meaningful information on what you need to do, or for whatever reason to do so, creates a game where you feel a bit lost at times with not knowing what you have to achieve next, or why certain things are happening. It’s all very trial-and-error, adding further to the monotony of the gameplay. It’s a shame really, as there is a huge amount of content here, from unlockables, hidden areas and surprises to extras upon completion. It also contains a multiplayer element for up to four players, adding an extra layer and almost forces a saving grace with its mad-cap, party-style of games such as a ball-colouring variant and zombie survival mode, to name but a few.

Overall, Pool Panic is a strange game. It’s very unique and fun to play, but also contains some puzzling moments as well as a repetitive nature that is inescapable. However, it’s bite-sized levels and pick-up-and-play mentality do make it an ideal candidate for casual play, and it’s in this setting that the game is probably best played. A few technical issues aside, everything works well with a satisfying pool playing mechanic and its puzzles are suitably perplexing in places, offering a nice challenge. It’s overriding charm though, lies in its mad-cap humour and zany level designs that will make you laugh a lot. It’s huge content provides many hours of entertainment, an element that is further boosted with its multiplayer capability, and, in my opinion, the best part of the game; although, again, repetition still remains. This isn’t a bad game, but too many frustrations make it far from being good, making this a game that will not appeal to everyone. Even if it does appeal to you, then it may disappoint, which is a shame, as there is so much potential here, but a few inescapable nuances, as well as some unnecessary ones, dampen the overall experience that could have been.