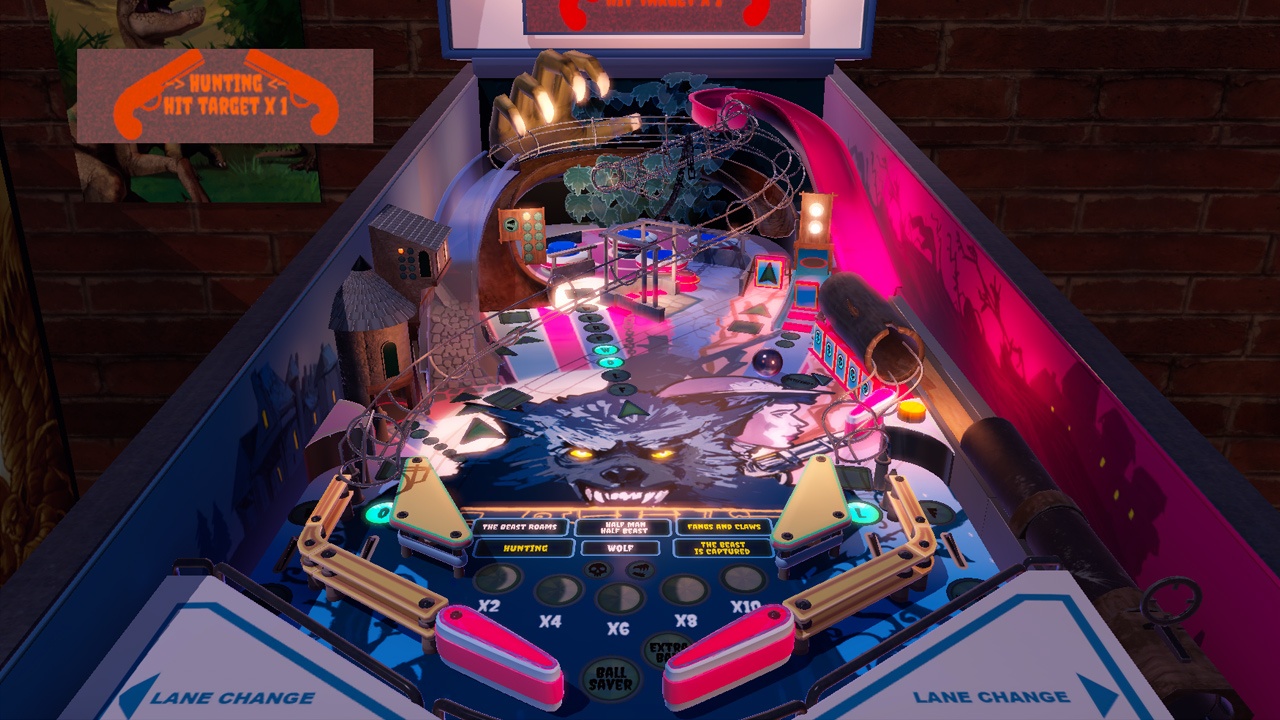 There must be some part of me that has a bit of a masochistic streak when it comes to certain video games. Sometime, you look at a game, think it’ll be inherently awful, and then have a blast as a chicken who lays bombs. Other times, you think a game is going to be amazing because it’s got cool graphics and concepts, and then you’re a chicken who just keeps punching things as long as I mash the A button. You’d think the moral of the story here would concern chickens, but that’s just awful coincidence. No, I should know by now that the pinball standalone titles that keep landing on the Switch aren’t going to be to my standards. Zen has really set the bar in terms of what keeps pinball interesting, and I’ve seriously got to lower the bar before entering into another game because, well, they shouldn’t be held totally accountable. Okay, yes, if a game is dreadfully broken, boring or terrible, then it needs to be called on that, no question. But maybe, just maybe, looking at the latest release from EnjoyUp Games, I can lower my standards a tad, and perhaps I can properly enjoy Werewolf Pinball.

Werewolf Pinball couldn’t be more self-explanatory if it was called “A pinball game with Werewolf graphics and werewolf themed missions.” It’s not clear, whatsoever, what your role in this pinball table is, be it some kind of werewolf hunter or werewolf itself or just a werewolf fan. The point is you’ve got a table with three flippers, two lanes, a few bumpers and spinners and at least two skill shot holes on either side, and, guess what, it’s all werewolf themed. There isn’t anything necessarily wrong with this, and, in fact, I need to give some serious credit where credit is due right up top. That’s right, gentle reader: I’m starting with praise. 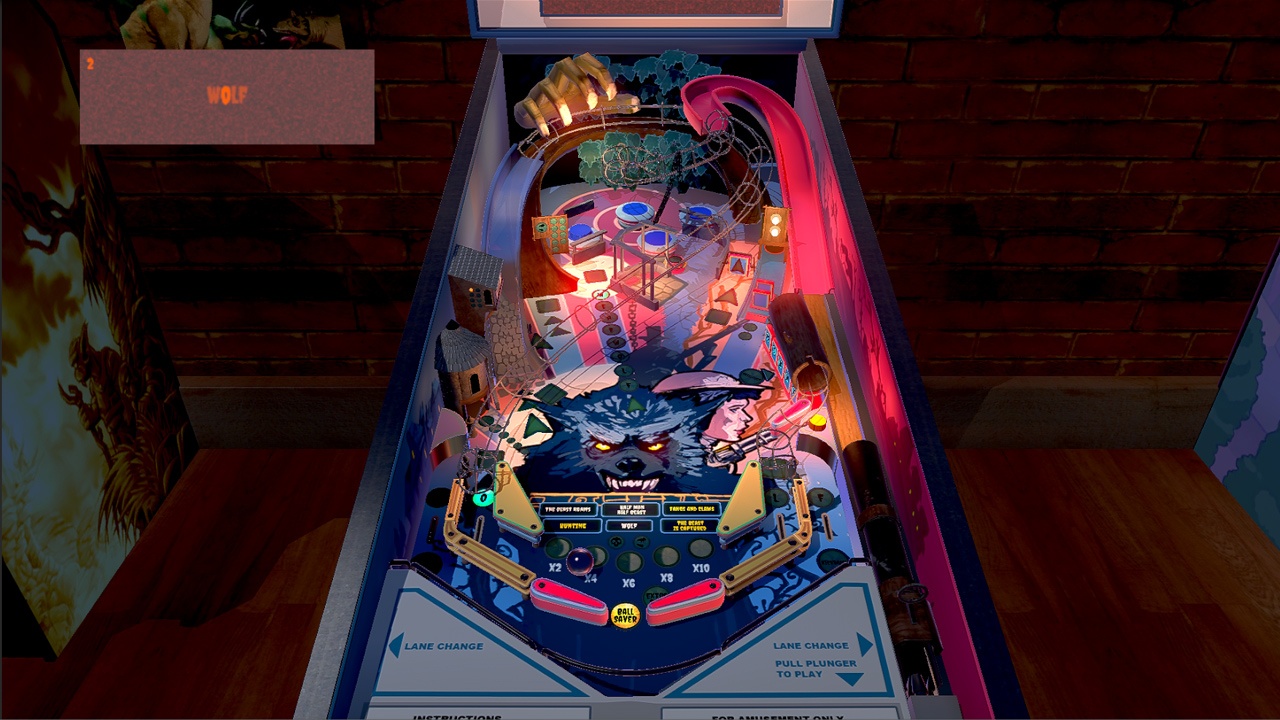 Now, I have no idea if EnjoyUp Games has ever read my reviews, but I’d like to think they’ve taken a glance from time to time, and they might be a bit angry at me as a result. After all, I love pinball, and their two games so far (Jurassic Pinball and World Soccer Pinball) did not satisfy me, and I made it known. A big factor against these two titles were presentation: they were so barren and boring in terms of mechanics and design that they seemed almost empty. Werewolf Pinball addresses this with a really solid balance of color, props and direction without going overboard. Everything is done up in a great, black/purple scheme to really give that nighttime, slightly terror-laden feel to the various parts. A werewolf snarls down at you from the top board, and his clawed hand creeps over the left corner, almost obstructing the lane, like it’ll grab your ball right in mid shot. One of the skill shot corners looks like an abandoned shack where a werewolf might go to transform; without stepping on other IPs, it looks like the shack is shrieking, if you catch my drift. Even the small details of the game itself, which are baked and displayed on the table, fit into the motif: a multiplier seems to exist depending on the phases of the moon, which I love and really appreciate them incorporating.

Additionally, the soundtrack is pretty goddamn spot on. People always take the classic horror villains/heroes and give them the same, tired pipe-organ soundtrack, like the estate of Boris Karloff will sue them if they don’t set up how grandpappy used to scare people for a nickel. EnjoyUp Games has gone a much better route with some properly looping, just varied enough heavy metal guitar, which captures the spirit of the wolf on a much, MUCH stronger level than anything I’ve heard so far. The werewolf is one of those monsters that really didn’t come from the Victorian era in the same way, so it’s never totally held the same level of “humanity faces death in a time of bleak philosophy” that the others have. Instead, when I think werewolves, I’m more in tune with the Lycan people from the Underworld franchise, and this soundtrack is way better situated with that level of character. And if you don’t like the Underworld movies, fair enough, but I feel they’re some of the best dumb movies that feature monsters around today.

So, how about the gameplay itself? Well, sadly, it’s more of the same for EnjoyUp Games when it comes to the table and pinball mechanics. The physics is okay but nothing spectacular; it fits in with how you’d imagine a pinball table to play. The third flipper is crucial to nailing one of the ramps, and I found out that it’s damn impossible to make it up there and activate certain missions otherwise. However, that flipper also feels like it’s tucked at a very awkward angle, and you need to arc the ball up into the bumper nest and have it come out just right if you actually want to hit the flipper. This means, should you activate the missions that require utilizing the far ramp, you need to be both skillful and lucky, a terrible combination for anyone to have to lean on. The skill shots on the left and right side are pretty tricky, but not unbearable, and I found myself hitting them when I didn’t need to. 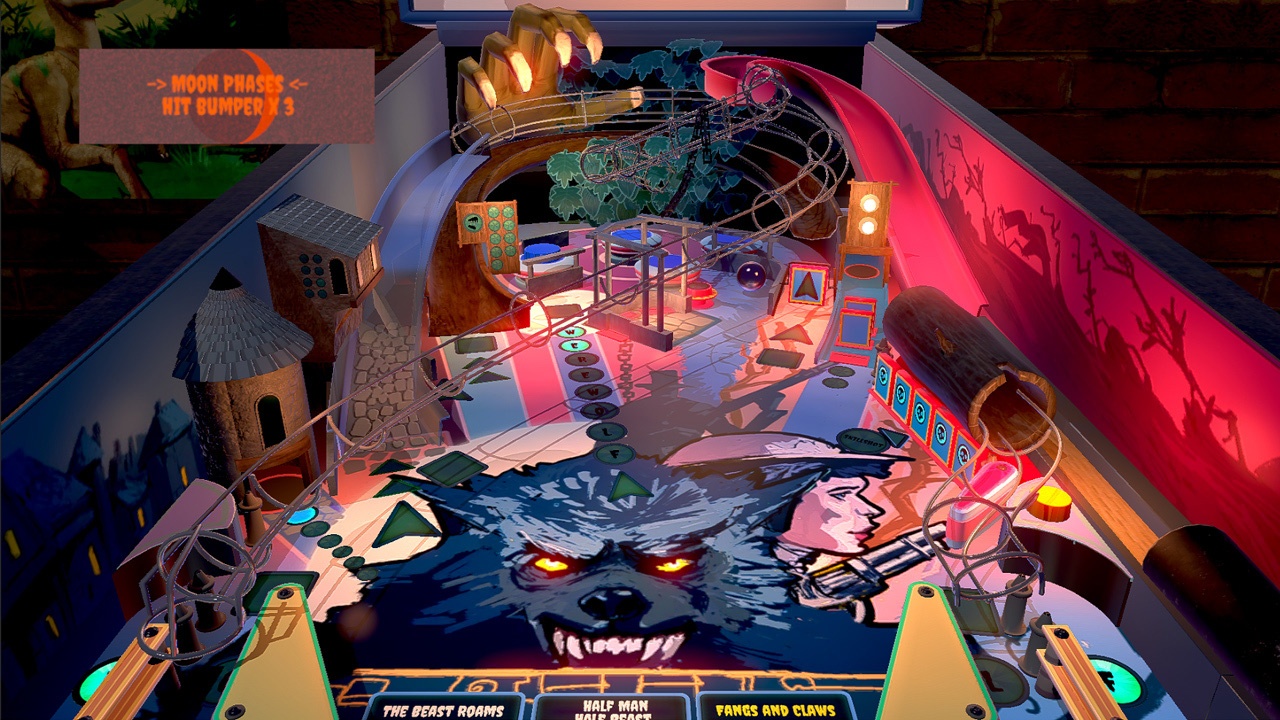 But here’s the deal: I found that I actually was invested in my time with Werewolf Pinball. Far from just going through the motions and trying to rack up a score through sheer dumb luck alone, the missions that I activated were clear-cut, easy to figure out and actually required a few shots to finish. When you got going with a hunt or a moon phase change, you felt like you wanted to pursuit the adventure to the end, and the driving guitar really helped that along. Dare I say, I had some fun with Werewolf Pinball. I mean sure, I certainly wish we had some real leaderboards or a way to just put all the EnjoyUp Games tables into one, but, for two bucks, it’s a gnarly icon to have on the Switch display and the game itself keeps you going.

The best way I can describe Werewolf Pinball is “pleasantly surprised.” This wasn’t something that magically made me a huge EnjoyUp Games fanboy, but it certainly washed away a lot of my ire and predisposed inclinations. The Switch, believe it or not, is still a fairly new place to develop and publish, and big and small companies alike are getting a feeling for what works and what doesn’t. There is still more to go with these pinball games, especially in regards to orientation: until we have vertical gameplay, these pinball tables cannot compete with the big boys, and vertical stands/grips are more popular every day. Nevertheless, this is the best pinball table EnjoyUp Games has put out so far, and you might even find a little fun with the game at the end of the day. Just don’t delete your other tables just yet.