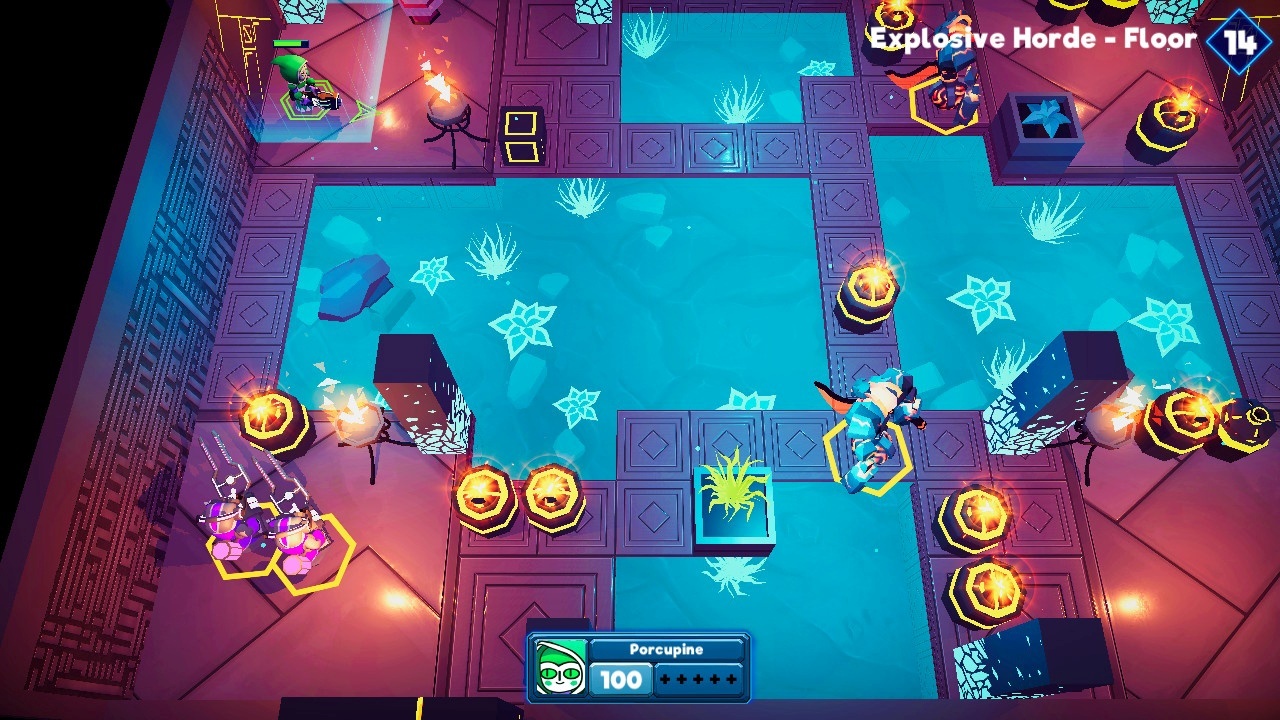 One thing that I’ve noticed with games that tout optional co-op capabilities are general imbalances to difficulty. For example, I really praised No Heroes Here for correctly correlating the strength and number of mobs to deal with based on how many players were participating (even if I panned the single player mode altogether). And that’s genuine praise: a lot of the time, you see games that allow a second player to participate, but they haven’t bothered to properly balance what that implies to the game itself. Either too many enemies spawn or not enough, and, in either case, the want to have a second player disappears. Sadly, I think the inverse of this issue is the core of my play with NoReload Heroes, and a game that makes things no fun without a second person can really chafe, especially when it’s a twin stick shooter.

NoReload Heroes is the goofy tale of four scientists who get ready to launch a robot that they’ve built for world peace, because that was the missing component our society needed: a big robot. Surely The Day The Earth Stood Still taught us nothing about what could happen when it comes to giant robots. Still, the scientists have built the damn thing, and, inexplicably, allowed a command to happen that, if random keys are hit on a laptop, the robot switches from good to evil. Oh, look, a plot rock has fallen on the keyboard. Welp, the robot’s evil now, as is all other robots in this multi-layered, very underground lab, and the scientists need to fight their way back to the surface to take care of Gort their robot before anything else bad happens. Thankfully, like all scientists, they keep a bunch of magitech guns lying around, so let’s get up to the surface to rock and roll. Seriously, couldn’t they have had the robot do something besides “world peace?”

As a roguelite, permadeath, twin stick shooter, you already know you’re in for a few things with NoReload Heroes. For one, level layout is mostly useless in memorization: the game truly scrambles things around with each new game, so the path is never clear or easy. Secondly, you will die in this game, and you will gain nothing for it. From my time with NoReload Heroes, it doesn’t look like anything unlocks or gets gained between plays: you just go as far as you gan before you get killed. Along the way, killing enemies will net you exp gems, which contributes to a group level system. Whoever gets the last gem that triggers a level up gets to decide between one of two perks that the whole party enjoys, like faster walk speed or more HP. Additionally, enemies will occasionally drop weapons of varying damage and effects, from simple shotguns and railguns to more interesting weaponry, like ricochet shots and helix-shaped bullet patterns. They may also drop crystals, be they of the healing variety (gotta get that HP back somehow) to stackable damage crystals, which add 25% more damage to your shots until you take a hit. You can stack up to five damage crystals at a time, so players may want to decide upon a “leader” who maxes out their damage first. 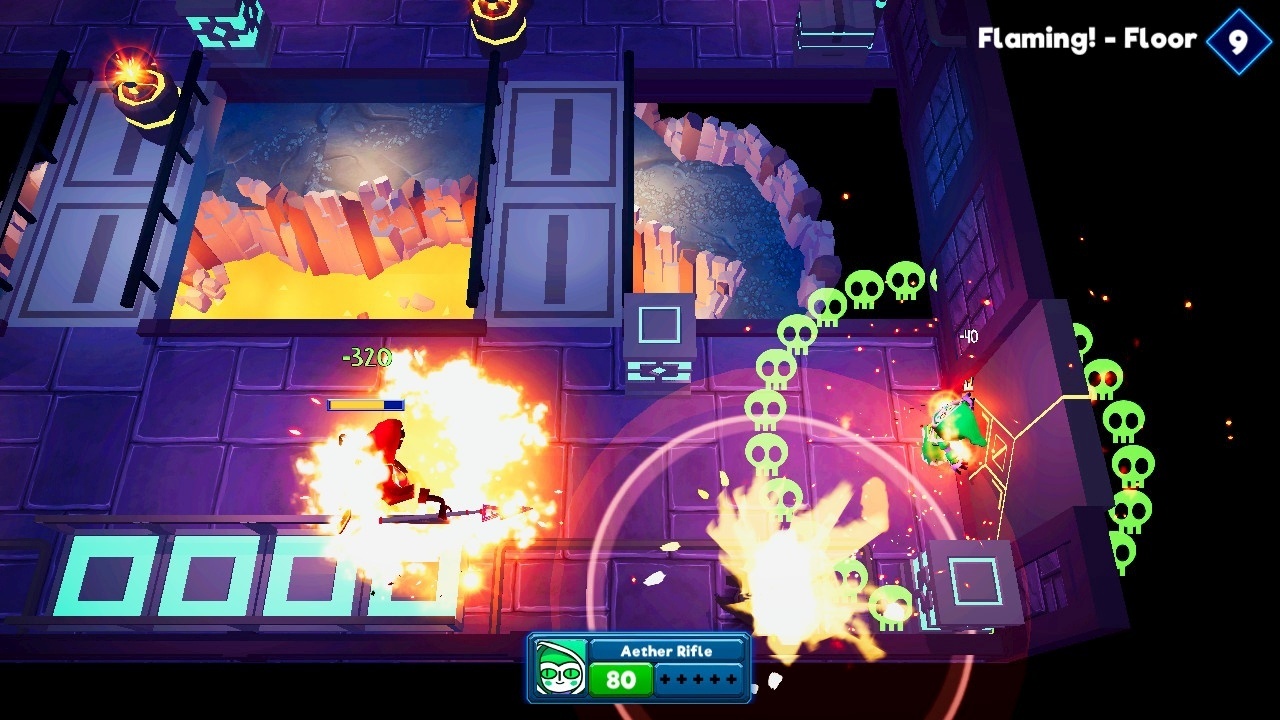 There are some things that I did like about NoReload Heroes. Firstly, they’re very upfront, honest and correct about learning the game: five seconds on the first level and you figure it out. You can shoot, there’s no ammo limit, and you can dash, which gives you a brief window of invincibility a la Enter the Gungeon’s dodgeroll. If you’ve played Gungeon in any capacity, you’re good to go for NoReload, and you may even find yourself soloing it with relative ease. Secondly, the game is actually quite big for its britches: the levels are expansive, with multiple rooms that give you a second to see the layout and watch enemies spawn before coming at you. You’ll find a weapon that you truly like eventually, but you can swap with anything you find on the floor, give it a few shots and walk around a bit before deciding. You’ll want to test out everything to see how it sits with you. And, if you can make it all the way to the bosses, they’re pretty big, appropriately powerful, and give you a better sense of the scope of power the game contains. NoReload Heroes has so much potential, and it really struggles to try to convey that and deliver it.

However, when you’re not fighting those bosses, you’re just grinding through the levels, and it’s where the game sort of shows its seams. For one, the HP for most of the enemies is just silly in terms of how many times they need to be shot: anything after level two seems to be overly buffed, and the BallBots are just ridiculous with their agility and potential pain. You need at least one walking upgrade before you feel like you’re moving at a good rate, but this isn’t even totally necessary because the dash mechanic is infinite and kind of, well, broken. Many of my encounters with the mini bosses felt like I was doing a bullfight instead of a gunfight. Shoot until they shoot back/charge, dash twice to put myself at the other end of the room, continue shooting. At least with two players there’s a better sense of the damage rate moving, but even my fellow player would simply dash out-of-the-way while I kept shooting from a distance. It feels very much like, even with stronger guns, you just need patience to slowly whittle down everything that you come across. 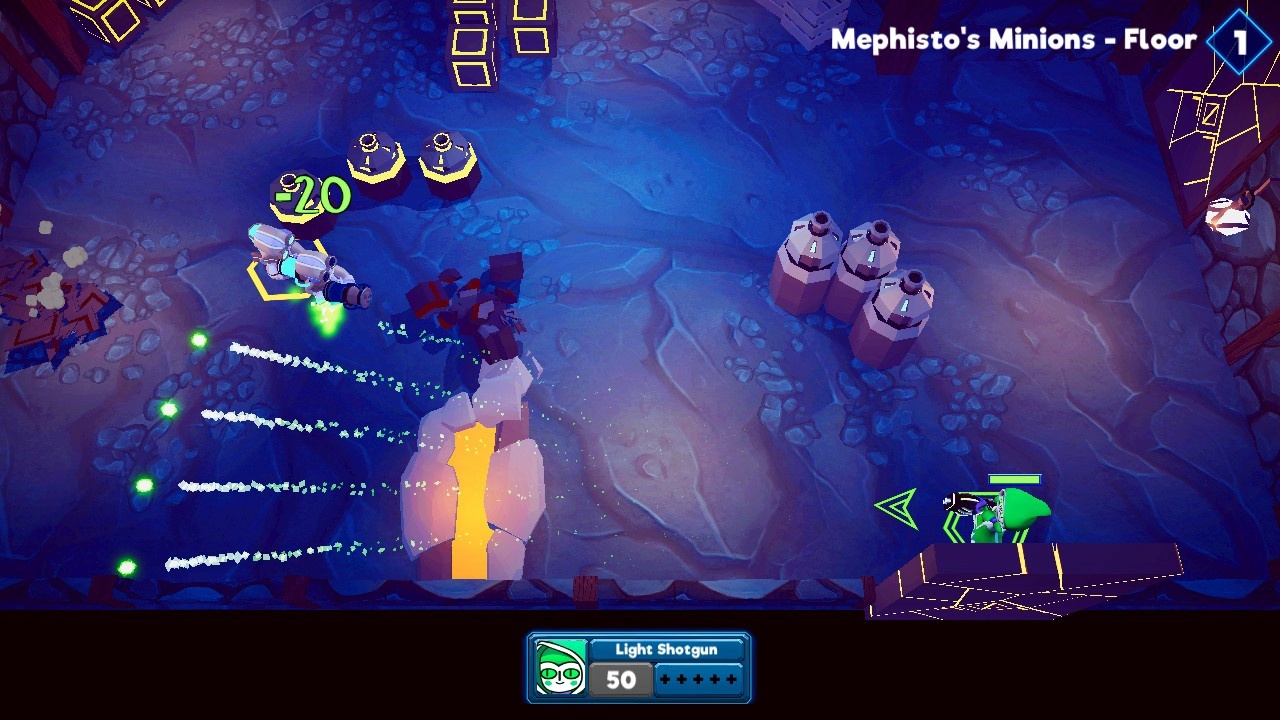 And that’s even if you don’t get mobbed in the process. I totally blame myself for the number of times that I got pinned down in a corner, but, once it happened, I really had very little recourse except to try to dash like mad. If I were lucky, I would find a small hole in the hitboxes of the enemies and squeeze through, suffering minimal damage. A couple of times I dashed, came out next to explosive barrels, and then died because a single shot from the enemies caused a chain reaction that ruined my day. These were times when I realized that NoReload Heroes wants you to use the buddy system as much as possible, which simply isn’t feasible when the game currently only has couch co-op and we are all busy people. Look, I really, truly prefer local to online co-op, but I understand and acknowledge not everyone can get over to Joey’s house to watch him play Night Trap like we used to. So to have a game that’s really, really difficult to play singularly and then ask that you have other people in the vicinity to play is a tough sell.

Luckily, Forever Entertainment is doing the heavy lifting and math for Stupid Stupid Games (the creators/Steam publishers) and knows what’s up. Not only is the game cheaper than the Steam version, there’s a good chance that we’ll see more features be added as the game progresses and becomes successful. It’s a risky gamble, though: if I don’t like playing the game very much right now, what’s the likelihood that I can get other people to play it so that it becomes something better? Still, I can at least appreciate that the Switch version already appears to be getting more love and attention, and I do wish the game the best. A twinstick roguelike that doesn’t require 100+ hours to unlock all the potential loot is nice, and a decent co-op system with plenty of mayhem is great. But, as a primarily solo player, it’s a bit disappointing to see the gradient of difficulty levied at the one person army.