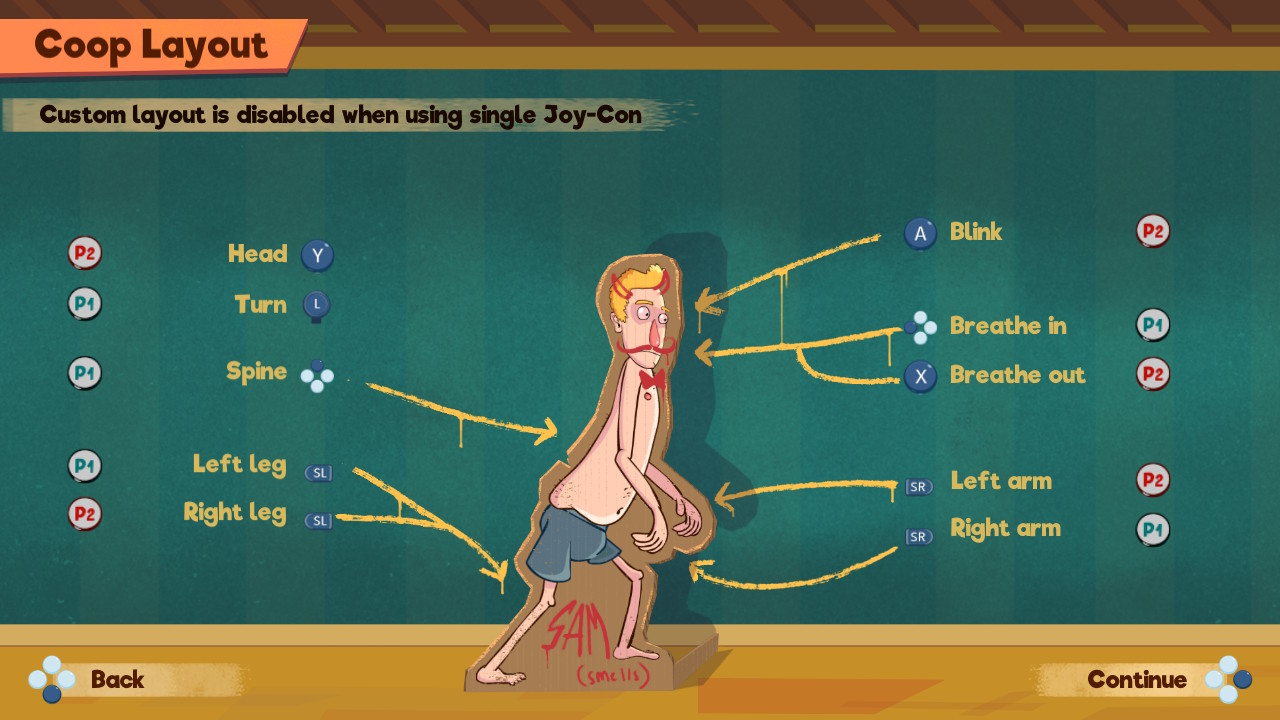 The important element behind streaming games that occasionally gets forgotten (either by devs or by the viewers) is the “game” aspect. Sure, it’s really funny watching someone flail about with ridiculous controls or the most asinine storyline you could hope for, but there’s a real good reason that not every game is QWOP: it’s been done before. You can’t just hammer out the “everything is funnier when the game is all cats” again or whatever the hell on mobile gaming has been for the past two years. But the Nintendo Switch has made a couple of things strangely apparent, and I’m appreciative for this insight. One is that players genuinely like some of these crazily frustrating games, and they’re being reprinted on the eShop for those wonderfully masochistic fans. And two is that you don’t always need the ‘Net to be watching: getting a bunch of friends together, drinking and then challenging each other to whole new levels of insanity is also pretty fun.

Manual Samuel is a game about a rich, arrogant dude named Samuel who lives his life without a care in the world for the average person, the working class or how to really connect/identify/respect anyone besides himself. A massive truck comes along, however, and changes his perspective on life by promptly making him dead. Seeing that Hell requires you to get a job of manual labor for all eternity, Sam is terrified and wants any way out of this pending nightmare. Samuel strikes a rather unusual deal with Death: survive 24 hours on Earth while putting in an honest effort and then come back to life for however long is actually left in his lifespan. The honest effort doesn’t just mean that he’ll need to work and do real stuff, but Sam also needs to live with a very conscious effort to “live.” This means manually focusing on things like breathing, blinking, walking, keeping his spine aligned, and also really, really thinking about the tasks he needs to do. Muscles to hold onto pens, cups and keys don’t just move themselves, you know! For the first time ever, Samuel is going to have a very hard time.

Manual Samuel is a puzzle game, of sorts, in which you need to get Sam to accomplish certain tasks and move on with the day in segments. Starting fairly simply, Sam will need to do things like do his morning routine, drive to work, navigate the office, do his new job, save the town from angry robots, and I would say more but the plot is already wildly off the tracks at this point. As you may have guessed from the title and the plot summary, none of these benign tasks are actually that easy, as you need to keep Sam going through a series of button presses. Without some attention, his spine will give out and he flops over. The screen blurs when he hasn’t blinked in a long time. And failure to breathe means failure to stay awake, or alive, for that matter. Every action that you need to keep in mind is carefully laid out for you prior to each level, with the common traits of body upkeep being universal constants with a couple of exceptions. These exceptions are made clear by Death, who hangs out with you for the entirety of the game, so don’t think the mechanics are just going to pull a fast one on you. 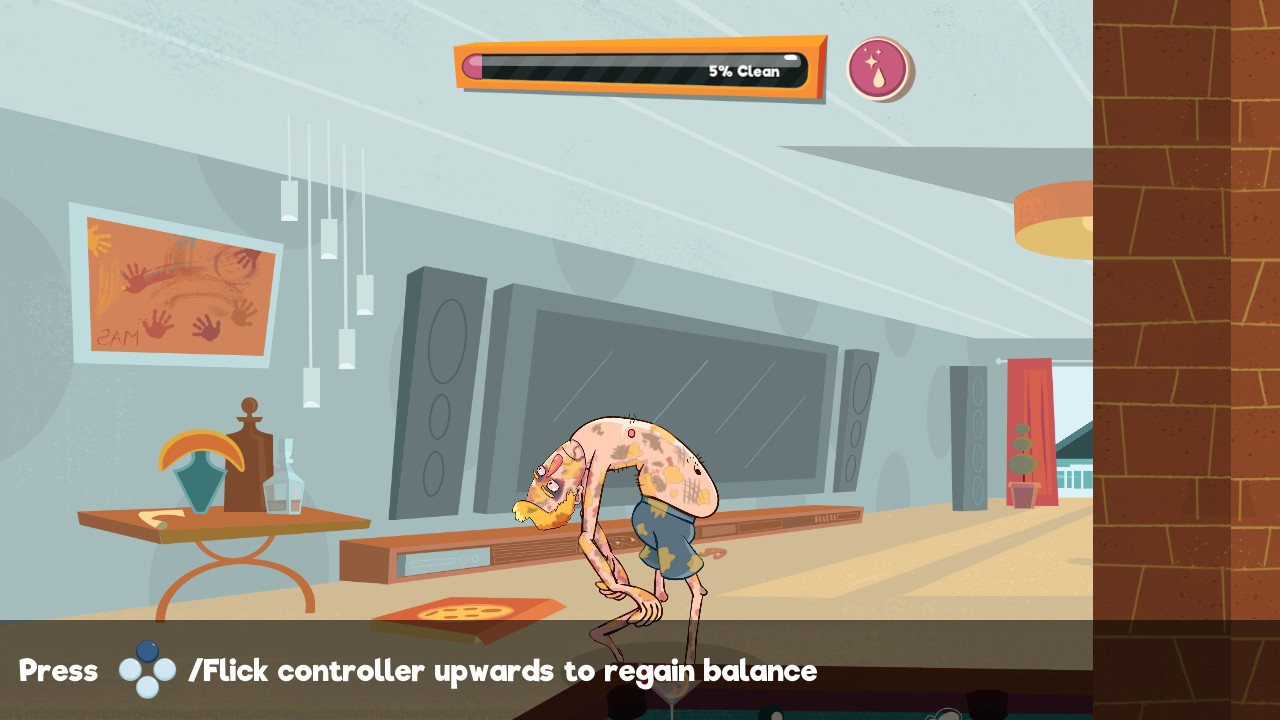 Since it is a puzzle game at the heart of it all, Manual Samuel really works at two speeds: story mode and time attack mode. Everytime you clear an area in story mode, you unlock the ability to go after it in time attack mode, which is where the game really flexes its muscles in replayability. Story mode is fine and dandy, but it suffers from two minor inconveniences: length and urgency. The entirety of Manual Samuel can be banged out in two hours or less, depending on your familiarity with the game, so this may be a tad disappointing for newcomers who are used to long-term investments with games. Don’t get me wrong, I absolutely adore the story and the characters within it (more on that in a moment), but it is pretty short and true to the promise of “24 hours on Earth.” As for the urgency factor, Sam can’t die in the game, he can only be inconvenienced. So, for example, if you forget to breathe, Sam will simply drop to the floor and pass out, at which point he will lie there until you get him up and moving again. It’s funny, and it makes all the difference in time attack mode, but, even when things are awful and insane in the main game, there’s no chance of a game over, just bad times and hilarious reactions.

Control-wise, you get into a good groove of things for most of the levels, just trying to keep things in mind, and it’s balanced fairly well on the JoyCons. Breathing and blinking are the two biggest points to try and not forget, and they often decide to rear up and curse you right when you’re in the middle of something. There’s a particularly difficult section where you need to open a door, grab an item across the room, and get back before the door closes. Hitting the same walk button twice results in you doing the splits, failure to blink obscures your vision (not a huge problem) but faster walking uses up your precious oxygen faster, resulting in a good chance of you passing out before getting through the gateway. It can be seriously tricky to try and balance out the buttons all by your lonesome, but it’s far from impossible. I would, however, recommend leaving off the “Spine Tingling” option, as Perfectly Paranormal didn’t do HD rumble and left it at regular rumble, which can be jarring when Sam fails spectacularly in some areas. Additionally, the motion controls that are touted are a nice little touch, but nothing earth shattering, since they tend to be pretty simplified. Using the “up” gesture to realign your spine was helpful instead of trying to mash yet-another-button to keep moving. 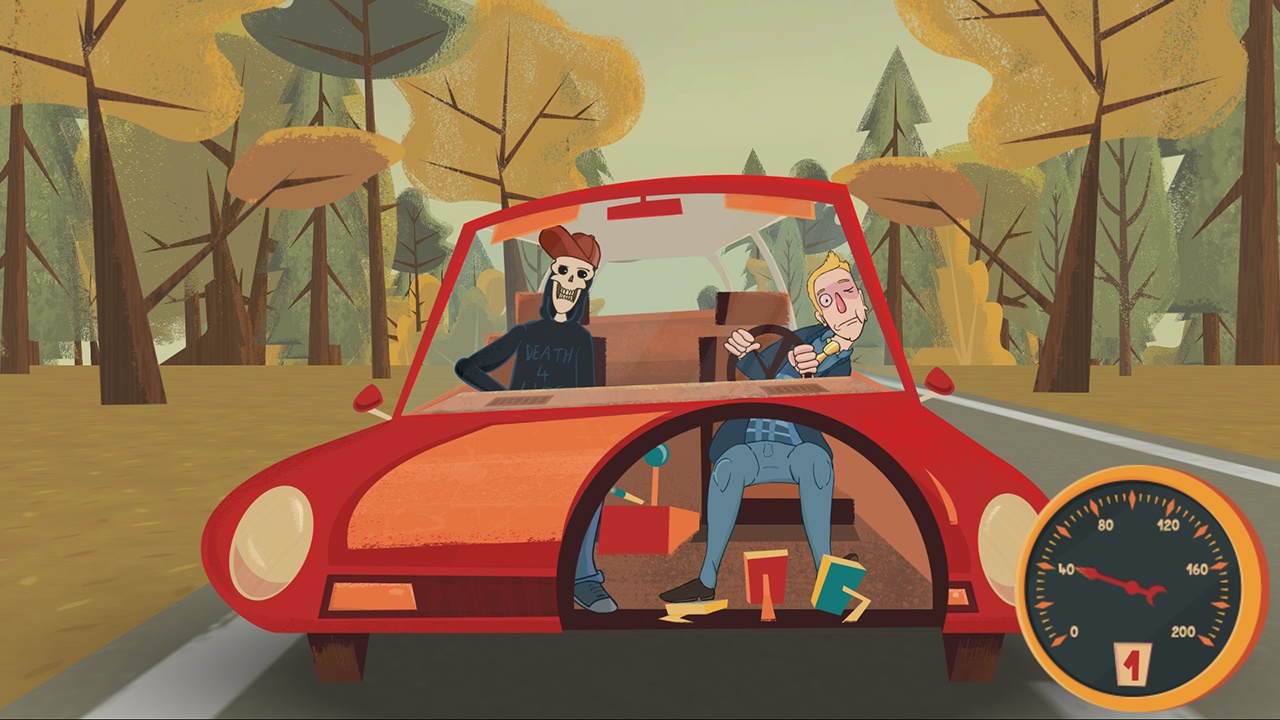 Now, the two player Co-Op mode is where the fun really comes in. Playing Manual Samuel solo is a test of timing, patience and skill. Co-Op is a test of family and friendship and results in multiple laughably aggravating moments, especially if you have an audience. Having one player being in control of only half the movements means a ton of splits, dropped cups, urine flying everywhere, and taking more than a few shots to the head in the process. Some games have a hard time conveying the absurdity of co-op play, and then players get angry at each other and then you never want to play again. Manual Samuel is one of those titles where everything is absurd from the beginning, so you’re okay if things go further haywire. Now, granted, if you’re trying for achievements or time attack high scores (which grant achievements), you may be better off playing alone or with another seriously invested friend. But, in any case, the division of labor is well done, funny and fair, and worth the price of admission alone.

Similar to Octodad, Manual Samuel may draw players in with the ridiculous premise, but the genuinely funny moments and characters will keep you invested. Sam, as the Weekend at Bernies protagonist, is bland and not really interesting, but he technically goes through character development through your carefully decided movements. Death, on the other hand, is this amazing representation of an immature, self-absorbed being who fluctuates wildly between being aware of the world around him and causing more than a few idiotic incidents. His banter with War, who is played by an equally skeletal but far more hardcore female demon, is perfectly natural and plays out well on multiple stages. Sam’s not-unkind but also not-proud father is a perfect foil for several stages, and represents every disappointed father who accidentally created a societal failure through personal success. And the narrator has such a grand time being cheerfully condescending throughout, taking equal snipey shots at Sam, Death, and the player themself.

Even through the game is rated high for violence, most of it happens off camera, and I thought it was a fantastic game to play with a mixed audience (skipping over certain parts of drive-by murders). It’s got just the right amounts of ridiculous mechanics, clear goals, frustrating but not game ending consequence and observational humor. Curve Digital also made a point to keep Manual Samuel at the same price point at Steam despite baking in all these extra goodies, so it’s hard not to recommend the game for anyone interested in such an interaction. If you’ve already started streaming, keep it up, and use your Switch. If you’re not into that scene, good: neither am I. But there’s a lot of fun to be had, a good amount of replay value, and, for about the price of a movie ticket, this could be a multi-day investment as you try to find all the hidden hashtags, all the delightfully awful achievements and score gold in time attack. Make the decision to buy this game. Manually.