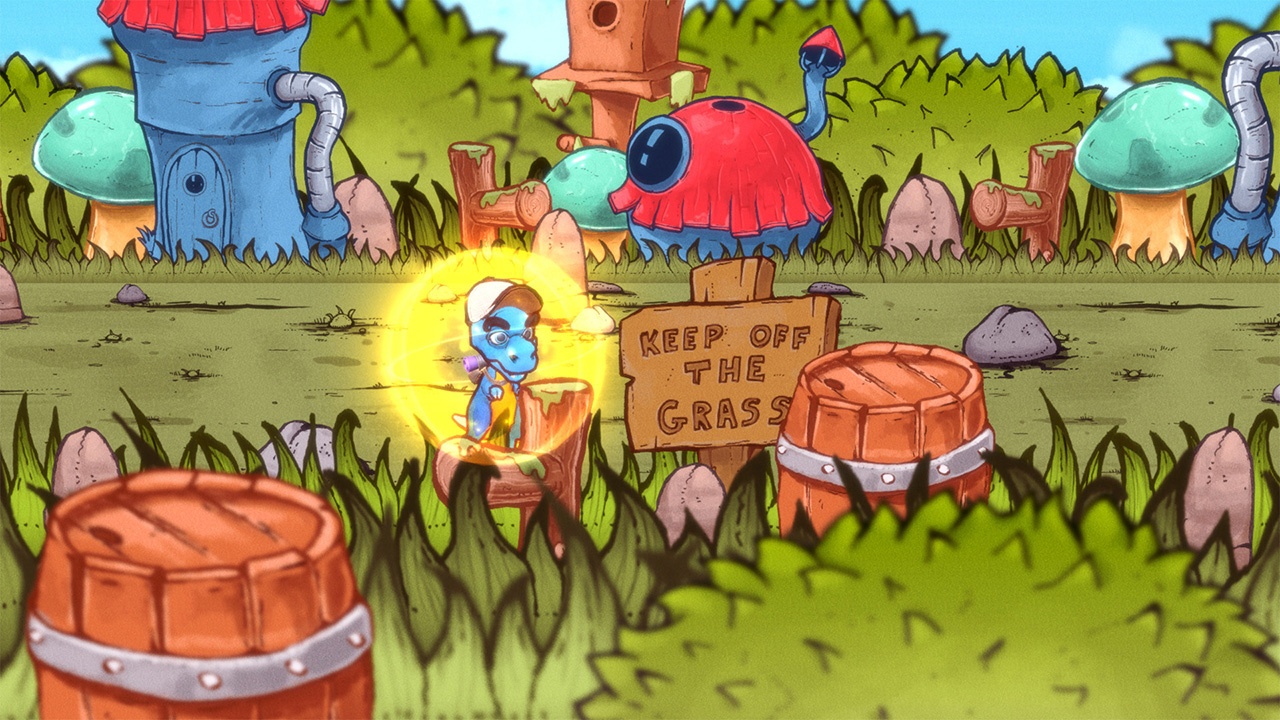 I genuinely believe that Rudy did a massive disservice to the up and comers of the world in general. I mean, I get what the director and the story was going for: being tenacious, believing in yourself, not giving up in spite of overwhelming anecdotal and physical evidence that you shouldn’t do something, and that Sean Astin basically did awesome movies his entire life. But there was this unexpected backhand that came about in which people started to believe ALL they needed was heart and to be scrappy, and that actual skill or training was trumped by a positive attitude. That’s simply not the case, and it shows when you get into any arena, sports related or otherwise. Do you want a doctor who did the standard ten years of schooling and unending residency to operate on you, or do you want the bring eyed upstart who knows in his heart he’s a surgeon, no matter what those jerks at medical school told him? But there are times and places where we can put aside the skeptical eye and just look at things with a hopeful portend. This filter that our inner child provides is the perfect lens from which to view Tiny Hands Story.

Borti is, against all odds, the name of a young T-Rex who lives in the village of Dinoburg. Borti has a pretty good life, enjoying school and friendship and soccer. The only problem is, Borti is a bit terrible at being a keeper because he doesn’t have long arms like some of his friends. It’s at this point that Borti should realize most dinosaurs are four-legged and the fact that he has arms at all puts him at a massive advantage over most others, but whatever, Borti is an unhappy dude. Determined to solve things the only way he can, Borti sets out to find magic of some kind that’ll give him the longer limbs he desperately needs. Thankfully, at the end of a mercifully short tutorial, Borti ends up falling into a cave and finding a fairy who’ll maybe grant his wish if he can get a bunch of crystals and beat some bosses. If you really read between the lines, this is basically the first story arc of Breaking Bad, but Borti doesn’t spend an abhorrently long amount of time screaming at his wife and making her somehow look like the bad guy. Anyways, plucky young Borti is gonna go and find those gems, make a wish, and probably learn the magic was inside him all along or something to that effect. To be real honest, if Borti just got his wish at the end and turned into a freak of nature with gangly arms on a T-Rex body, I’d almost be pleasantly surprised at the literal moral of the story.

The objective of Tiny Hands Adventure is to run through a series of platforming worlds, collecting meat for extra lives and finding the hard-to-reach gems strewn about. Thanks to a particularly interesting fixed camera situation, Borti enters each level at a different perspective, and the camera will automatically swing to where it thinks is the best vantage point. As Borti moves along, the path to victory is mostly clear, and he’ll be forced to jump, slide and dodge his way to the exit, running into hazards and baddies along the way. Bad guys can be cleared out by either jumping on them, hitting them with a tail swing or doing a Sonic the Hedgehog-style rolling attack into them. Some levels WILL need to be revisited, as certain tools and prospects aren’t available from the get-go. An early encounter with an icy ridge will inform you that a drill is needed, and, given that Borti hasn’t even mentioned woodworking or dentistry, you’d correctly conclude that he needs to come back at a later point. The streamlining of the levels allows for plenty of upward movement in spite of missing items, however, so you’ll be great simply forging onward instead of needing to continuously circle back. Once you have enough of a certain gem type, you face off against a comical world boss, and, as collect-a-thons go, getting all the gems from each world puts you that much closer to the best ending of all: scratching that compulsive itch for completion. 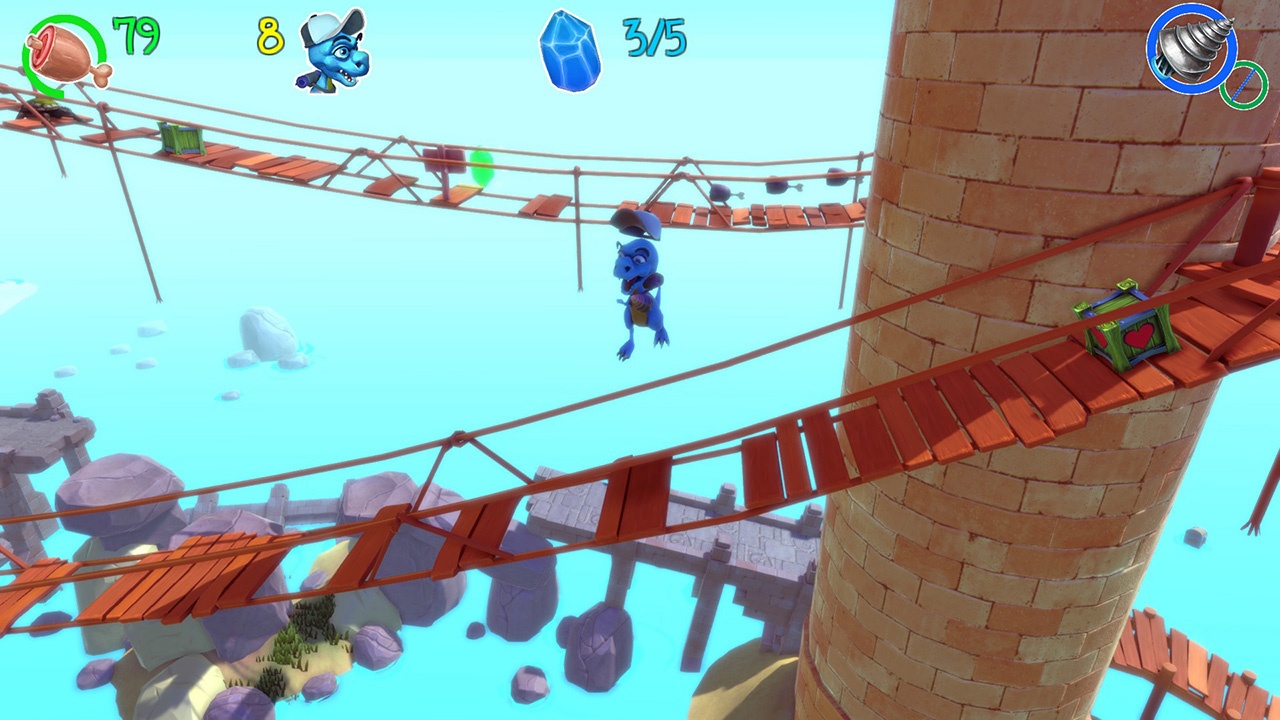 From the very beginning, it’s evident that the developers, Blue Sunset Games, has a very specific goal and audience in mind. The platforming isn’t at all like the modern, fully-flexible situations that we’re used to seeing in a lot of open world variants. Instead, Tiny Hands Adventure focuses on keeping things in a tighter environment, not quite “on rails” but certainly more limited in terms of where a player can end up and go/not go. In that moment, players will realize that this is a very, very clear nod to Crash Bandicoot, and this will immediately polarize certain types of players. For people looking for more uncertainty in where they’re going, Borti might not be walking and exploring at the pace they’d enjoy, and that’s important to keep in mind. On the other hand, Tiny Hands Adventure is PERFECT for younger players who are still getting their bearings on what to do and how to explore video game worlds without a parent holding their own tiny hands. Suddenly it all becomes clear: Tiny Hands Adventure might be better for kids than adults.

Take, for example, Tiny Hands Adventure’s artistic direction and style. Borti is outright ugly, but my kids apparently think that he’s adorable, which really shows where my objective eye may lie. The ugliness is on par with several popular mascots that kids latch onto, and Borti shares certain traits that pop and grab attention in a lot of ways that can maintain interest. Borti, the monsters, and the physical beings (bosses, the fairy, etc.) are all brightly colored, contrasting and exploding against one another in a very dynamic range. The meat, the levels and the gems, on the other hand, just feel boring and simple, which seems intentional to keep your eyes on the moving mobs and situations that will occur within the stages. When I’m trying to safety navigate some upward movement on mountainous and ice based levels, it’s helpful for things to pop clearly against the backdrop so that I can grab them or avoid them. The crates are missing a bit of shadowing, though, which left them sometimes feeling flat, almost like a tear in reality cropped up around a single instance. Yet I kind of just took it in stride, feeling that, perhaps, the styling was a further homage to the Crash Bandicoot games that clearly influenced the developers who made this game.

The controls of Tiny Hands Adventure are mostly good, but there can be some frustration when it comes to more involved areas. There’s an early level called Alien Stairway to Heaven (yes, really) where you have to ascend a long set of stairs, dodging falling boulders and, occasionally, massive paws that looks like they came from a space tiger. The hitboxes of the paws aren’t really clear or defined in a way that you can properly gauge from your vantage that the game decides, so playing this particular level (and several others) in handheld mode can lead to plenty of replay and retries. It’s highly recommended that you practice your jumps on easier stages to best understand where Borti can and will land in certain cases. After all, you might score a sweet Mario and bounce the offending aliens to death, but you may also just land smack in front of them and get you collapsing without so much as a fanfare or clever catchphrase. When you have a particular boss battle that randomly spawns monsters almost on top of you, guaranteeing an immediate kill, you can’t do much but vaguely move around. 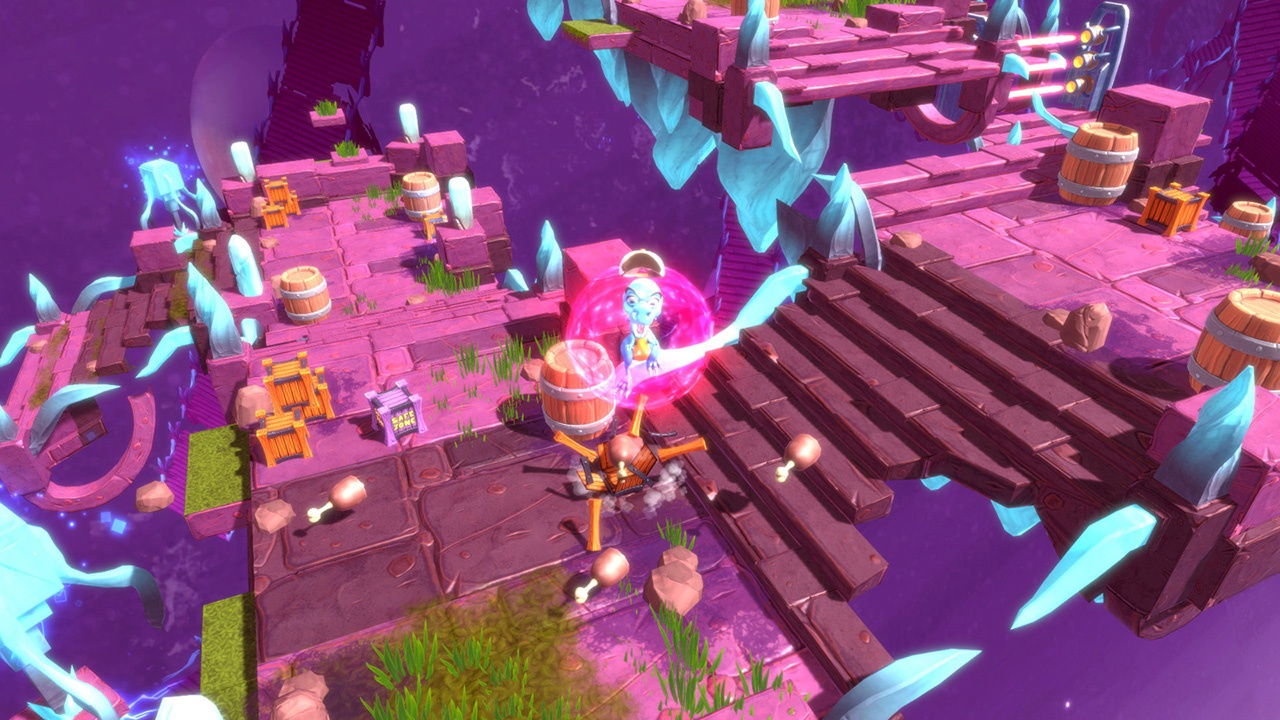 One of my few strong complaints is the completely anticlimactic way so many things are handled. When you move around in Tiny Hands Adventure, it feels like there’s this split second delay in literally everything you do, causing Borti to appear sluggish, the game to be mostly unhurried with progressing, and every boss battle to be almost lazy about the whole ordeal. Sure, you gotta beat me in order to progress further, but no big deal, take your time. There’s a limited number of lives to accomplish each level, but there’s an unlimited number of continues, and the death screen is almost more exciting than the You Win screen. When you land on an enemy, they sort of slowly lay down before disappearing. There’s such a great set of actions everywhere else, from when Borti curls into a ball for his attack to the ridiculously funny gesticulation of the larger characters. Borti is the victim of this same kind of animation, so nothing feels genuine or engaging about the experience. While the effects are rather lackluster, players shouldn’t consider them as anything that totally detracts from the gaming, just the finishing effect.

Lastly, the music of Tiny Hands Adventure is something that people of all ages can severely appreciate, especially with the wide variety of genres and styles. Like, there’s driving rock anthems, some poppy electronica, what appears to be alien inspired dubstep, and more. The music could be from anywhere, I didn’t research it, but it appears to be pretty quality and indicative of what Blue Sunset was intending on Tiny Hands Adventure being, and there’s some solid execution as a result. When you really get into the effect and the mentality of the stages, you straighten up and pay attention,  realizing that longer arms are not only what Borti needs, but what EVERY child strives for, and goddammit you’re going to get them longer arms! Couldn’t dinosaurs have made a more effective version of soccer that made the net smaller?

Tiny Hands Adventure isn’t the best platformer I’ve ever played, but that doesn’t mean it doesn’t have it’s charm in several strong areas. My children enjoyed watching it, and even the youngest was able to pick up the JoyCons and run through a bit of one of the more linear stages. The music is some of the more interesting BGM that I’ve encountered in recent plays, and I definitely think I’ll continue to bump through the tunes when the opportunity presents itself. I do think that the controls could be a little tighter, and some of the more aesthetic choices (certain animations, lack of splash screens) could have been added in for a better effect. If you’ve got an up-and-coming gamer in the family, it might be worthwhile for them to cut their teeth on this particular title before you thrust them into the deep end of platforming. If you’re looking for something to go toe-to-toe with Mario, you’re in for a bad time, but, if you simply want an indie love letter to fun gaming, then this is game is dyno-mite.