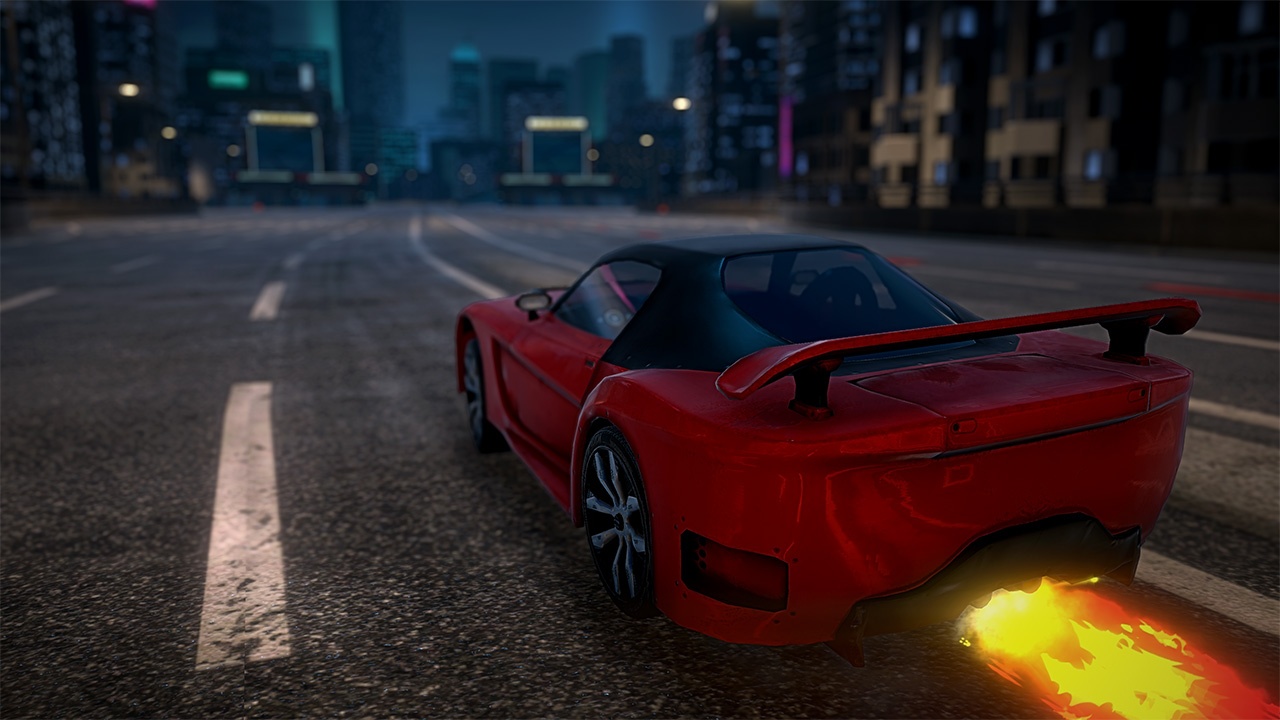 In its current state, the video game industry is obsessed with the Battle Royale genre, as each and every developer, big and small, is desperate to take a piece of the pie. But before we were all ears deep in the rather clunky and random one versus ninety-nine combat, we were all crazy about the now somewhat forgotten MOBAs, which back in the early 2010’s, were the next big thing. While the vast majority of the Multiplayer Online Battle Arenas was in no position to compete with the likes of League of Legends, and DOTA 2, there were some which managed to carve out a niche for themselves. However, the rapid growth of the both aforementioned titles, has ultimately deterred most from venturing into the genre – until today that is.

If you were to head to Twitch right now, you are more than likely to see both DOTA 2, and League of Legends in the top 8, if not the top 4. And it could be said that at this point, both these titles share an oligopoly which will never be broken. But this did not deter the Canadian Ratloop Games, which in a rather bold move has decided to move in onto Riot’s and Valve’s territory with their newest release, Vroom Kaboom. A Multiplayer Online Battle Arena title, which replaces your typical, fantastical heroes, villains, and mobs, with vehicles, missiles, and concrete barricades.

Just like most MOBAs, Vroom Kaboom pitches you against another human player, and has you destroy his or hers oil tanker. And in order to do so, you need to spawn ever new vehicles, and either use their weaponry to fire at the said tankers, or simply use their passive abilities, and or ramps, in order to launch yourself into them. And while the title heavily promotes one vs one combat, it is also playable in two vs two, and three vs three modes, which while allowing you to team up with friends, and/or strangers, ultimately are not as fun as the basic one versus one mode, as due to the title’s nature, increased number of players only clutters the rather limited battlegrounds, and strains you completely of resources. 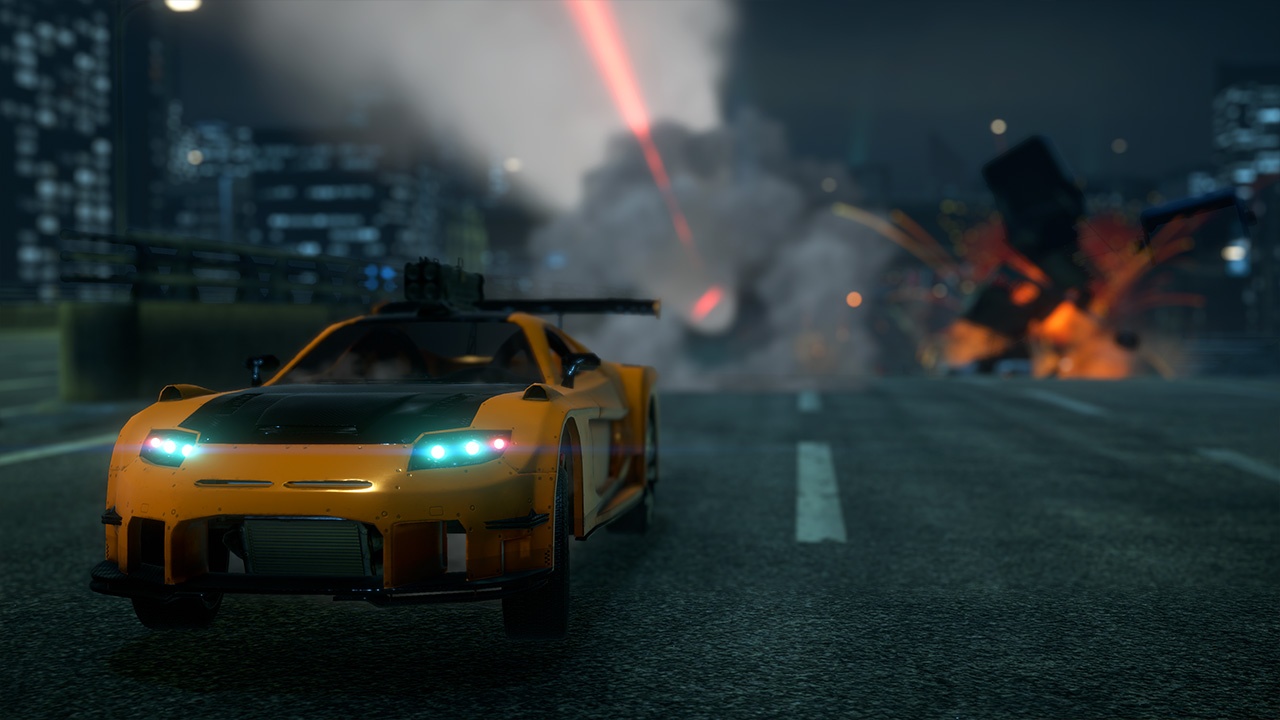 All in-game battles are played out on motorways which range from post-apocalyptic, Mad Max’esque desert landscapes, to modern, clean and precise Tokyo highways. And while those feature long stretches of road, they all, for the most part, are incredibly claustrophobic, due to their incredibly narrow nature. And while the long and thin design of all battlegrounds has clearly been a design choice, which has been clearly implemented to both support the title’s AI, it does take a little away from the overall experience as it limits you as much as it limits the AI. However, the tunnel like battle maps, are nowhere near as strict and limiting, as the title’s auto drive system.

In game, you can only control one vehicle, which as mentioned previously acts as your hero which you use to damage the enemy’s base. However, the title does allow you to launch multiple cars, trucks, and tanks at the same time, which just like the vehicles of the enemy, and your teammates’, are controlled by the computer. And while it having AI control all your quote-on-quote arms feels a little demeaning, it is nowhere near as bad as you having very limited control over the car of which you are in possession of. As Vroom Kaboom only allows you to turn left and right, use your boost, and the abilities. And while such approach to controls suits the suicide-centric nature of the title stylistically, it subsequently takes away a lot from the fun which you otherwise could have with the game.

As mentioned above, Vroom Kaboom, allows you to spawn multiple vehicles while in-game. And you do so by selecting cards which are ever-present at the bottom of your screen. But in order to maintain a steady hand of cards, and resources which are required in order to use the said cards, you need to collect oil, fire, and cards themselves, while barrelling down the road in your vehicles towards the enemy tanker. And while this gameplay loop can be fairly engaging, while playing one vs one, it is virtually nonexistent while playing any team based modes, as with up to six players, and dozens of vehicles on the screen, it is sometimes borderline impossible to gather any resources, or to replenish your cards. And while this could be negated with an introduction of shorter timer on item re-spawns, or with bigger, team-based battlegrounds with higher number of items,  it does not change the fact that in its current state Vroom Kaboom’s team based modes are not as fun as they could be. 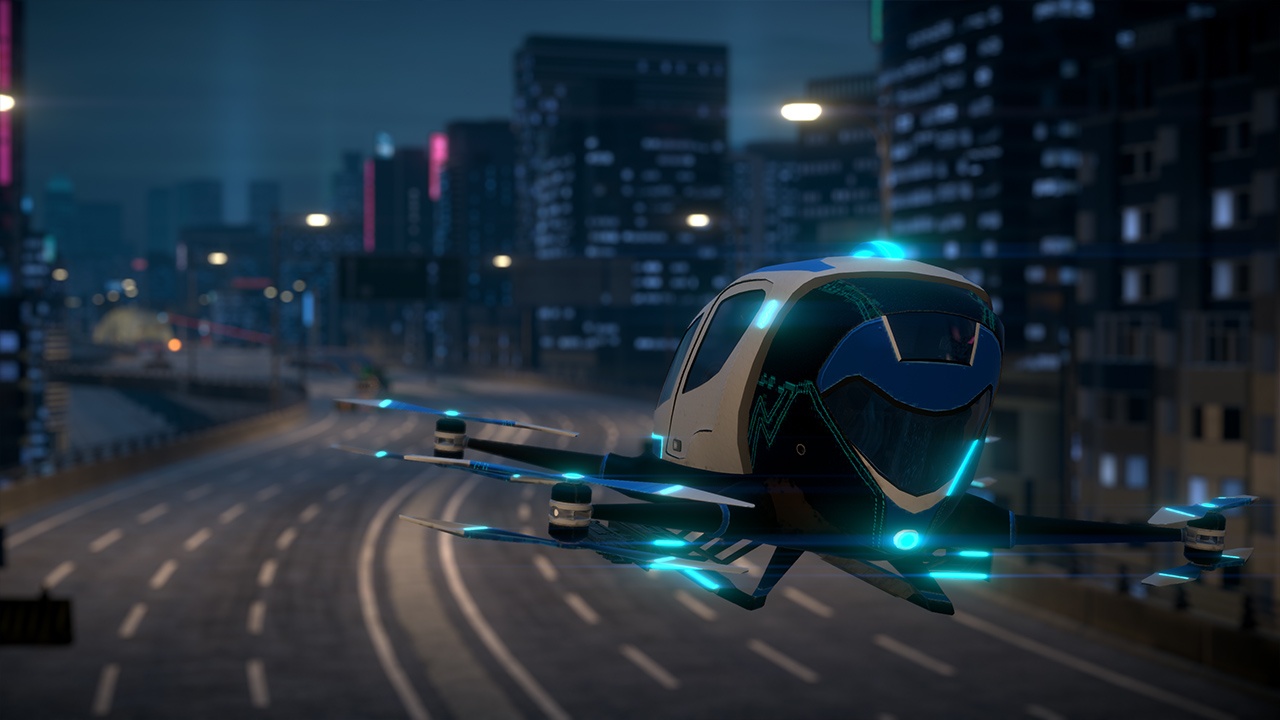 Going back to the cards, which are clearly the most prominent feature as whole, it has to be underlined that those can be a pain to acquire, as the in-game rewards are relatively meagre, and do not allow you to progress as quickly as you’d like. And while the title at hand does not feature any micros-transactions – at least for now – it also does not feature any tangible incentives. And I’m not just talking here about the in-game rewards, which boil down to insignificant amount of scrap, but also PlayStation Trophies, which all revolve around senseless grinding which can take even the most stubborn player hundreds of hours. But even if you get off your meds, and decide to grind all these trophies out, then you’ll still need some help of a friend, as Vroom Kaboom does feature a handful of online-only trophies, which can not be acquired legitimately, as only a week after launch, the title’s servers are completely dead.

Within the earlier stage of this review, I brought up the fact that the title’s card system, is seemingly its biggest feature. And this is true, but only to those who play the title in its standard form, as Vroom Kaboom does support Sony’s PlayStation VR. However, this review is only concerned with the standard version of the title, as I had no access to the VR headset at the time. But considering the overall visual quality of the title, and its rather crude and lacking UI, it is safe to assume that the VR experience could only take further away from Vroom Kaboom, as its visuals, especially up close, are nothing to write home about – but, they are something to write about to the police, as some could see the title’s mid-to-late 2000’s free-to-use industrial fonts, and early PlayStation 3 era textures and models, as a literal crime.

As a complete product, Vroom Kaboom feels like a pick-and-mix of ideas, which don’t quite work together – or even on their own for that matter. And while the term pick-and-mix is usually associated with confectionery and other sweets, then it has to be said that the mix held in the Vroom Kaboom branded bag, mostly consists of entrails and giblets, which nobody else really wanted to touch. But that being said, I feel like it is important to commend RatLoop Canada, for what it has tried to achieve, as on paper Vroom Kaboom sounds like an incredible product. But while the general idea may be great, then unfortunately the title’s supporting features, and execution are far from it. And ultimately, the mix of the three results in a rather average, if not underwhelming title, which some will forget about within a month, while others will never even hear off.

Instead of sticking to the basics and polishing up what’s already there, the developer behind it decided to go all-in and tack-on needles features which only take away from the title.