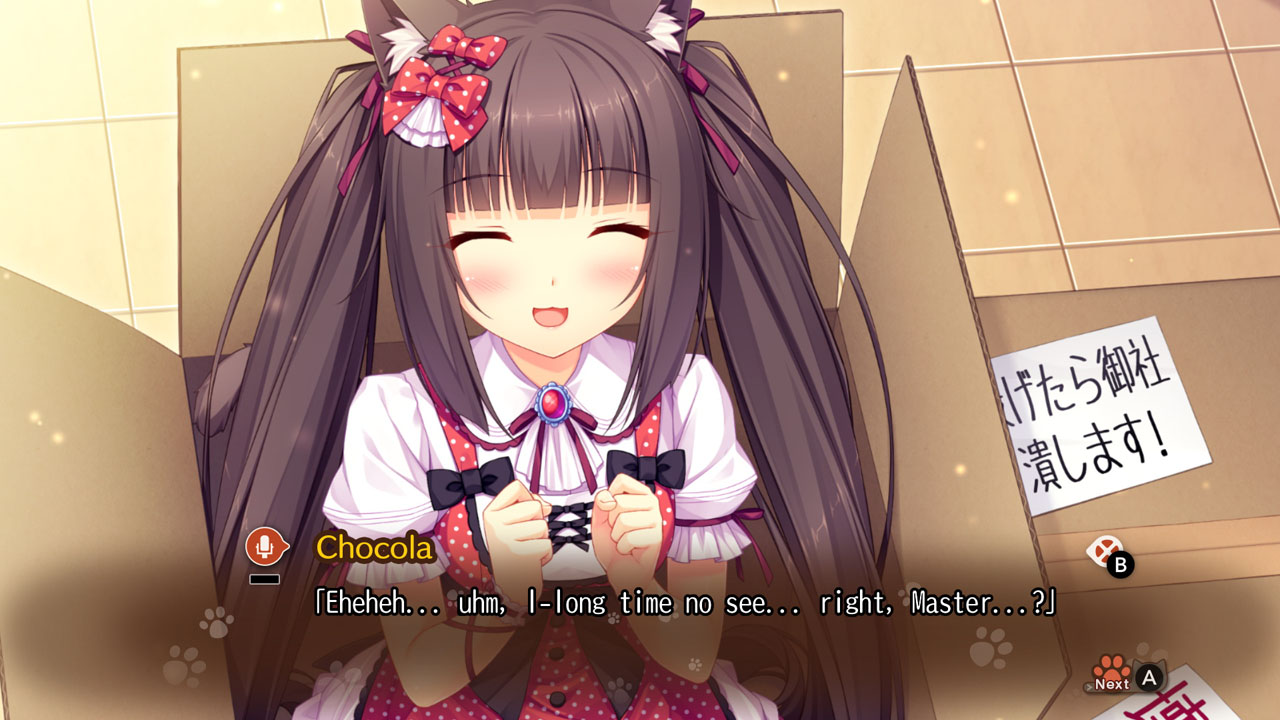 It’s a fair statement to say that Japan is, at times, unequivocally weird. There are approaches to fashion, music, food and, naturally, gaming, that don’t exist anywhere else in the world. While there are moments that may seem over-the-top in terms of presentation or detail, you can’t deny their success, even if it’s only in a closed environment. Take, for example, things like Dragon Quest X: it’s got the potential for expanding outside of Japan, sure, but the devs know that it sells best to the fanatical, devoted fanbase that Japan creates, and the cost of expanding and localizing to other areas would not be balanced by a few casual fans willing to jump on the wagon. That’s why you can play it, entirely in Japanese, from other countries, but that’s as far as they’re gonna help you. But nothing that simply explains away the oddities of Japan fully justifies or explains the release of NEKOPARA Vol. 1 onto the Nintendo Switch, other than the age-old saying: Catgirls are cute.

NEKOPARA Vol 1. is the technical beginning of the saga of Minazuki Kashou, a young man with dreams of opening his own sweets cafe/bakery somewhere out there, all on his own. Or at least, he intended to go on his own, but he has a couple of stowaways. Chocolat and Vanilla, his twin catgirls, have boxed themselves up with the help of Kashou’s little sister, and now they’re here to be a part of his new life, whether he intended it or not. Realizing that he needs all the help he can get, Kashou agrees that the catgirls can stay with him as long as they work for their living: in this case, donning maid outfits and serving up customers at his new cafe. Oh, the catgirl thing: humanoid catgirls are just a part of this world. They’re about 75% human and 25% cat, so they look like people, have cat ears and a tail, can talk and do normal human stuff, but also need special shampoo, will play with cat toys, and will occasionally just lose their damn minds because, well, cats. In any case, Kashou looks out for these wild twins as his own adoptive sisters, and, through a series of hilarious hijinks, we get a better look into the world where pets are almost people, but still look to you as their Master. Capital M.

Instead of feigning ignorance regarding the game, let’s just address the elephant in the room: NEKOPARA is a series of erotic visual novels with incredibly explicit sex scenes, especially since the animation style for the cut scenes is done with semi-movement, giving everything slight depth and action. Nintendo, obviously, opted for the “not full of sex” version of the game, and the port done by Connect Wizard is pretty solid in terms of cutting around what must have been some incredibly strange, but good for some people, moments. However, this doesn’t leave a totally anaesthetised version of the game. In the first few minutes, you get plenty of suggestive dialogue, panty shots, a blurred shower scene and constant innuendo coming from one of the catgirls. No matter how cute the characters are, this game is straight up not for children, and getting this for your teenager on the Switch comes with all the caveats you could imagine from buying the Sports Illustrated Swimsuit Edition for your 13-year-old. If you are put out or offended by a ton of edge-of-profanity talks and situations, you should just avoid the game like the plague. There’s not enough cuteness in the world to counter the original nature of the game, which sleeps just beneath the surface. 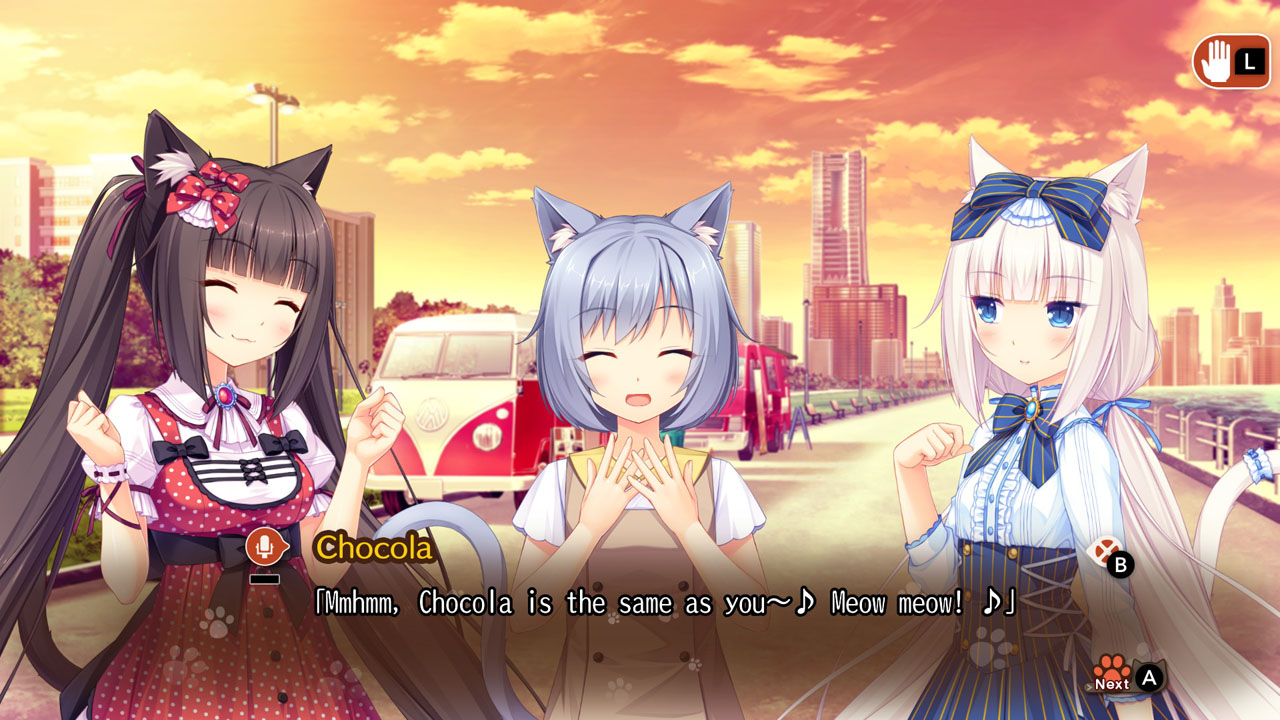 However, if you’re comfortable with sexual tones that aren’t too direct, NEKOPARA Vol. 1 is a pretty interesting and fun ride. Clocking in at just under five hours of normal play, this is a straight up, no holds barred visual novel: you have no choices, no paths, and nothing to do that will, in any way, affect the storyline. You’ll see the interactions between Kashou and his catgirls, get a peek into the lives of his family and the other catgirls they still have at home, and also the world, as a whole, and how they interact with the catgirls. You’ll see some funny moments, some endearing moments, and some sections that’ll affect you in wildly different ways depending on how you view the game. Kashou is a pretty blank slate in terms of a faceless protagonist, and does a decent job of just being accepting and moving the plot forward as it happens to him. In comparison to other recent pseudo visual novels I’ve played, Kashou is far less inflammatory or subversive. He simply exists, you can port into his identity, and then you deal with the strangeness of the entire game.

As far as a slice-of-life, erohumor title goes, NEKOPARA is incredibly fun and engaging. You’ll always have something happening, be it a disaster in the kitchen or a deep love confession in the middle of the night. When the game is funny, it’s dreadfully funny: the moments are witty, wry, well voiced and tongue-in-cheek with room to spare for players to step back and kind of look at the situation as a whole. When the game takes a moment to be “serious,” you’re often taken aback, simply because the build to it occurs naturally but you never thought the game would necessarily go that far. There’s this idea that, at some point, the game will pull it’s punch and remember some things, like “they’re cats” or “you’re definitely not a cat.” But that pull never comes. Far from being a traditional harem game, NEKOPARA Vol. 1 just has several people end up throwing themselves in your general direction, and you have to watch Kashou deal with their emotions as best he can without violating a lot of terms and agreements for the eShop. The end result is…well, it gets a bit odd. 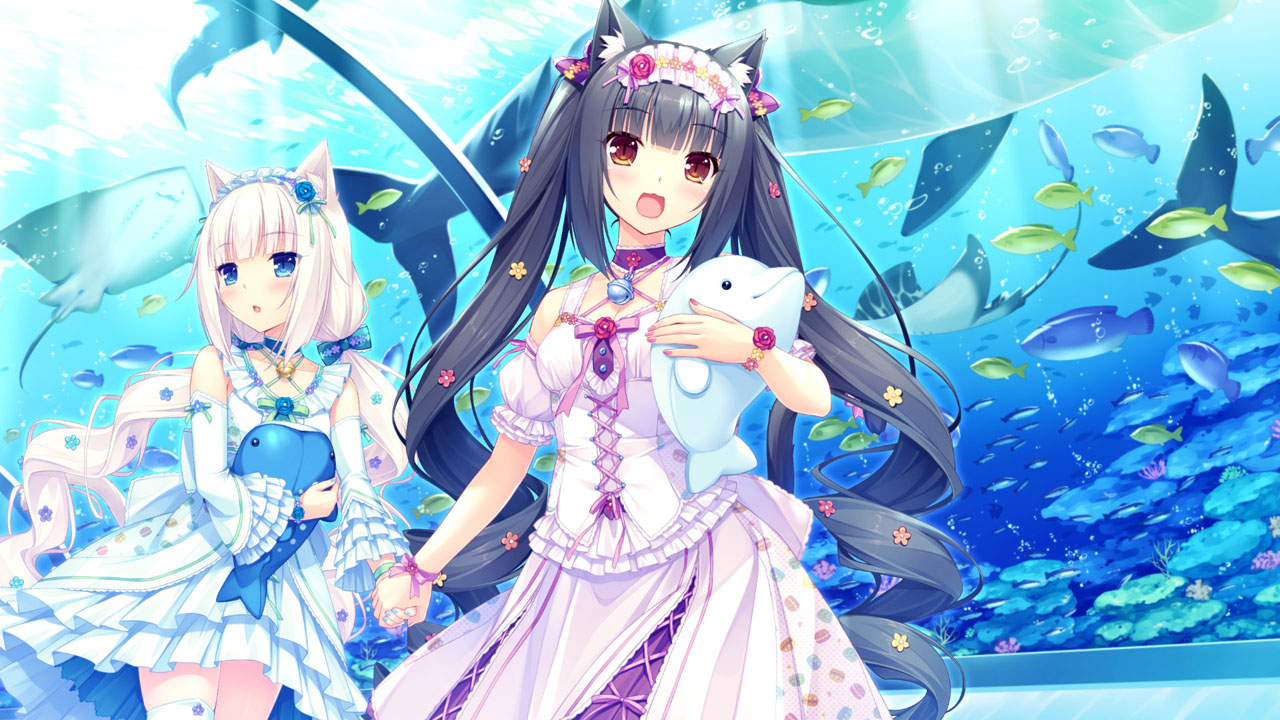 NEKOPARA Vol. 1 can best be broken into two halves: before and after Shigure. Before your little sister comes to visit about halfway through the game, things are very upbeat, happy, silly and just driven to the one goal of making it on our own, without the family support. But, after your sister comes with her own collection of catgirls, and the concept of the Bells (proof of catgirl independence) is introduced, the dynamic changes significantly. Suddenly there’s a greater concern for the personalities and interests of Chocolat and Vanilla, and their mannerisms shift in turn. When Chocolat ends up in heat, things get far too bizarre, even for me. Up until this point, there’s a feeling of “oh, yea, they’re girls who act like cats, but it’s all okay.” After this choice encounter, now you have to contend with a lot of mixed emotions about continuing on to see where the story goes and shutting it off to go play in the sunlight. If you’re okay with moving forward and potentially seeing more romance bloom in even stranger ways, but, I must admit, it can rebalance itself and retain the humor and the love in the later stages, even if I have to occasionally click rapidly to get through some odd moments.

For the Nintendo Switch, we’ve got a bit of goodies in terms of making this port worthwhile even for second time buyers. The big one is the inclusion of Vol. 0, which includes a bit of the backstory of everyone prior to leaving for the cafe. I actually like Vol. 0 a lot, as it’s incredibly cute AND was originally created with no erotic content, so there’s more cohesion throughout. Additionally, the “touch” ability (allowing you to pause the game at any time to pat the cats wherever you please) is present throughout the whole game, so that’s great if that’s your thing. There’s plenty of language options, and the voiceover work, which is always top-notch, has been re-recorded for better cohesion between the different scenes. Oh, and there’s new opening songs and opening movies, but first time players might not know or care about that. But, for visual novel fans, this could be enough of an incentive to grab a game they already know well, plus the added bonus of playing it on the go.

There’s a longstanding meme regarding being ashamed of playing NEKOPARA Vol. 1 and hiding it from your friends and family. That’s ridiculous. While you shouldn’t go out of your way to show everyone the weird scenes where you’re kissing your cat and then explaining it’s your cat, there’s plenty of genuinely cute and sweet moments throughout, not to mention some great, dry humor from Vanilla. The Nintendo Switch is a proud symbol of expanding and overtaking the dying Vita fanbase, and the inclusion of such a visual novel is a bold step forward. If you’re into visual novels, or you’ve been curious about the talks but don’t want to see cat boobs, then go ahead and grab this Nintendo version of the title. If you’re really not into games that are just reading, or don’t want to think about the implications of the whole thing, you can safely take a pass: Vol. 2 will be out soon, and that’s a horse of a totally different color.

The infamous and often polarizing visual novel comes to Switch, bringing plenty of humor, tension and more catgirls than you thought you needed.