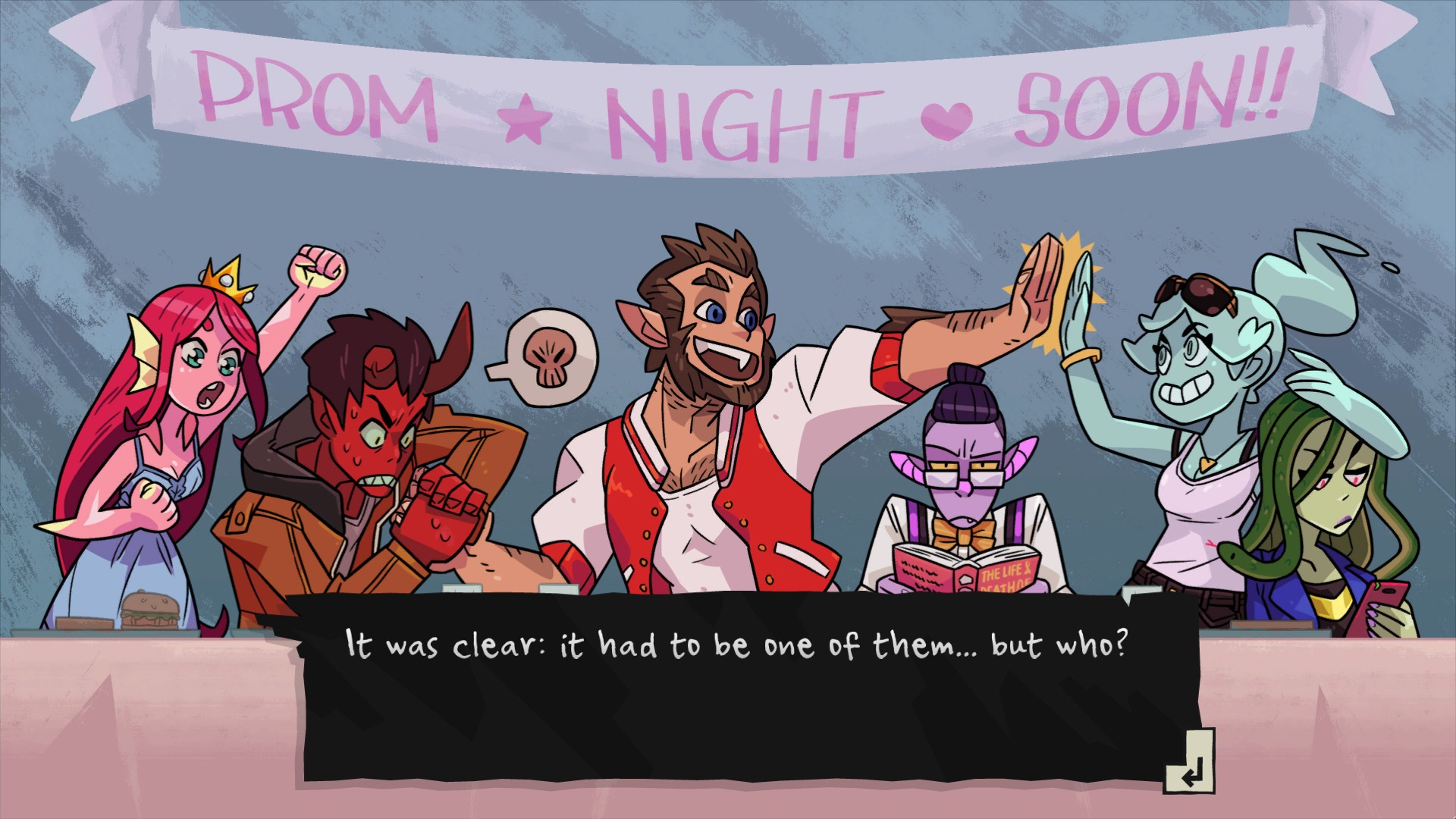 Monster Prom is a Dating Sim adaption of the Visual Novel genre, which features an impressive Multiplayer dynamic, a cast of old Hollywood “monster” architypes, and a plethora of possible endings. Released on April 27th, 2018, from Beautiful Glitch, Monster Prom is a hilarious and absurd take on the increasingly popular Dating Sim style of gameplay.

Monster Prom begins by asking the players to choose between one of our playable characters; in a Multiplayer session each gamer can select the same character if they choose to, simply renaming them to differentiate between each player. I was immediately impressed that Monster Prom allows players to choose their in-game pronoun, no matter which character they’ve selected; the bonus of he/him, she/her, plus they/them creates even more diversity and inclusion. This might seem like a minor feature to some, but this is a huge step forward in inclusivity within the gaming industry. Beyond that, players can rename their characters as well, or use the default configuration for each of the choices. The options include modern variations of classic tropes: essentially, there is an invisible man, a fire elemental, Frankenstein’s monster and his bride. 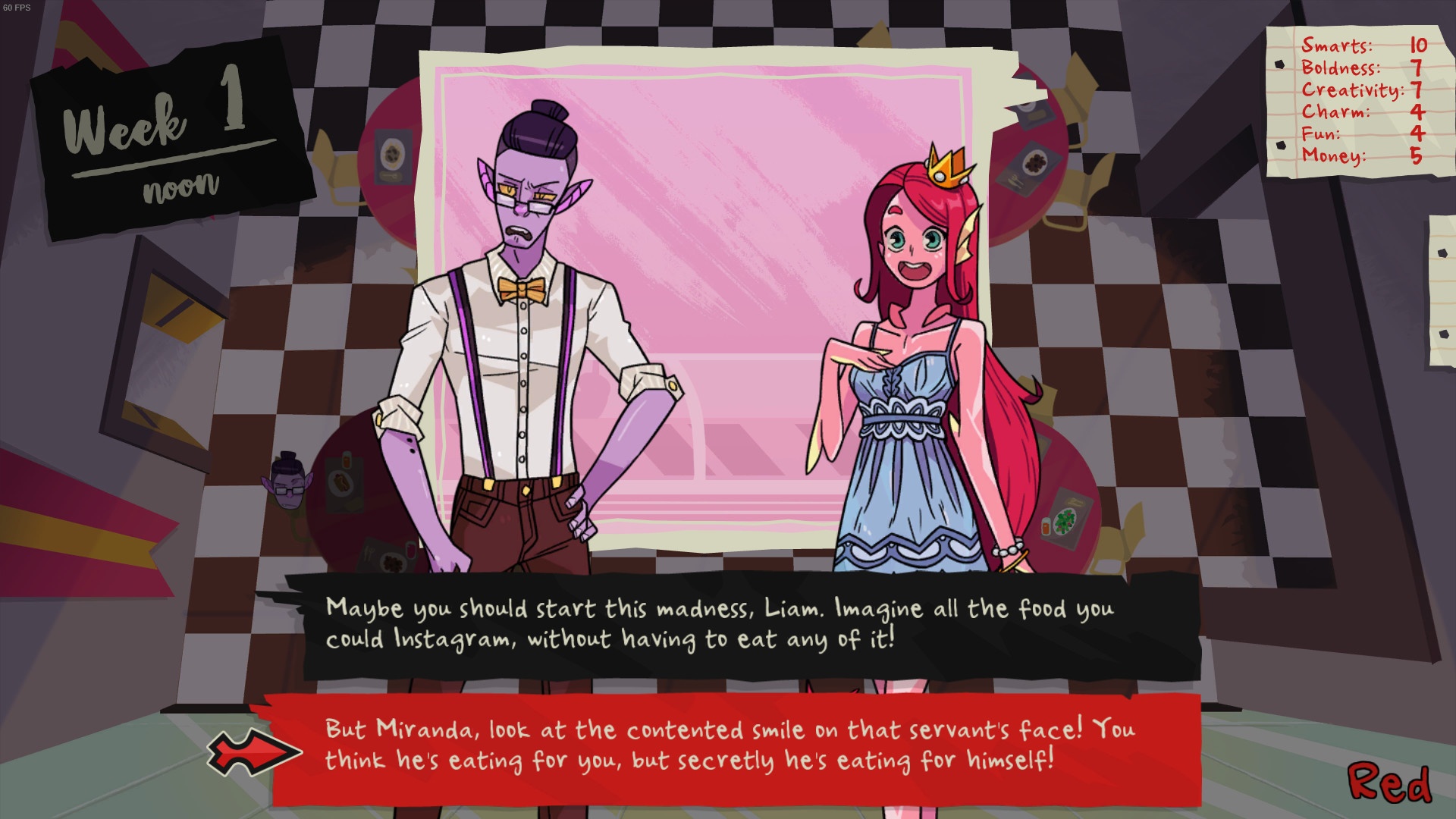 Once the gameplay begins, players are introduced to a whole host of characters from familiar, old Hollywood films. A wolfman, a Medusa, a ghost girl and a demon, just to name a few. These characters are the goals of the game – to select, woo, and date one of them. Each potential new romance has their own preferences on the in-game stat system; Monster Prom doesn’t make each combination clear, but it’s fairly easy to determine what personality traits and accomplishments might appeal to which character. Still, there is a mystery to it – I decided to woo Vera, the Medusa-like woman, but she seemed to favor things like Money and Smarts, which I sorely lacked. You gain these traits through your choices over the course of gameplay; Monster Prom, as with most Visual Novels, is just a series of choices and encounters that “level up” your protagonist while also influencing the NPC characters in the world.

I love the art style of Monster Prom. From the campus locations, to the characters themselves, the art is crisp, colorful, and compelling. While there are only a handful of locations to choose from, each has its own theme and style; also, different prompts are more likely at certain spots, which is indicated on the map using an icon system. I didn’t realize it on my first play-through, but I could have intentionally chosen locations to boost the stats that Vera finds most desirable. Even navigating to the correct locations doesn’t guarantee success though. Once the player picks a destination, they encounter two of the NPCs in a series of dialog choices. The “correct” or most desirable response often isn’t clear, so there is a guessing game and lucky picks as much as deducing appropriate responses.

The replay value in Monster Prom relies heavily on the tremendous amount of dialogue choices and difficulty in making big decisions. The story revolves around trying to date these monster classmates, as the name implies, and the gameplay takes place over the three weeks leading up to prom. There is a shortened version, for players who want a more brief and concise experience; it took us a couple of hours to “beat” the game in the extended version, with three people in a Multiplayer play-through. The conversations are full of pop culture references, and even a few digs at nostalgia; it is humorous and well thought out, and each of the characters has a distinct personality. The storytelling in Monster Prom is solid – something that has become industry standard in the Visual Novel genre and its sub-categories. 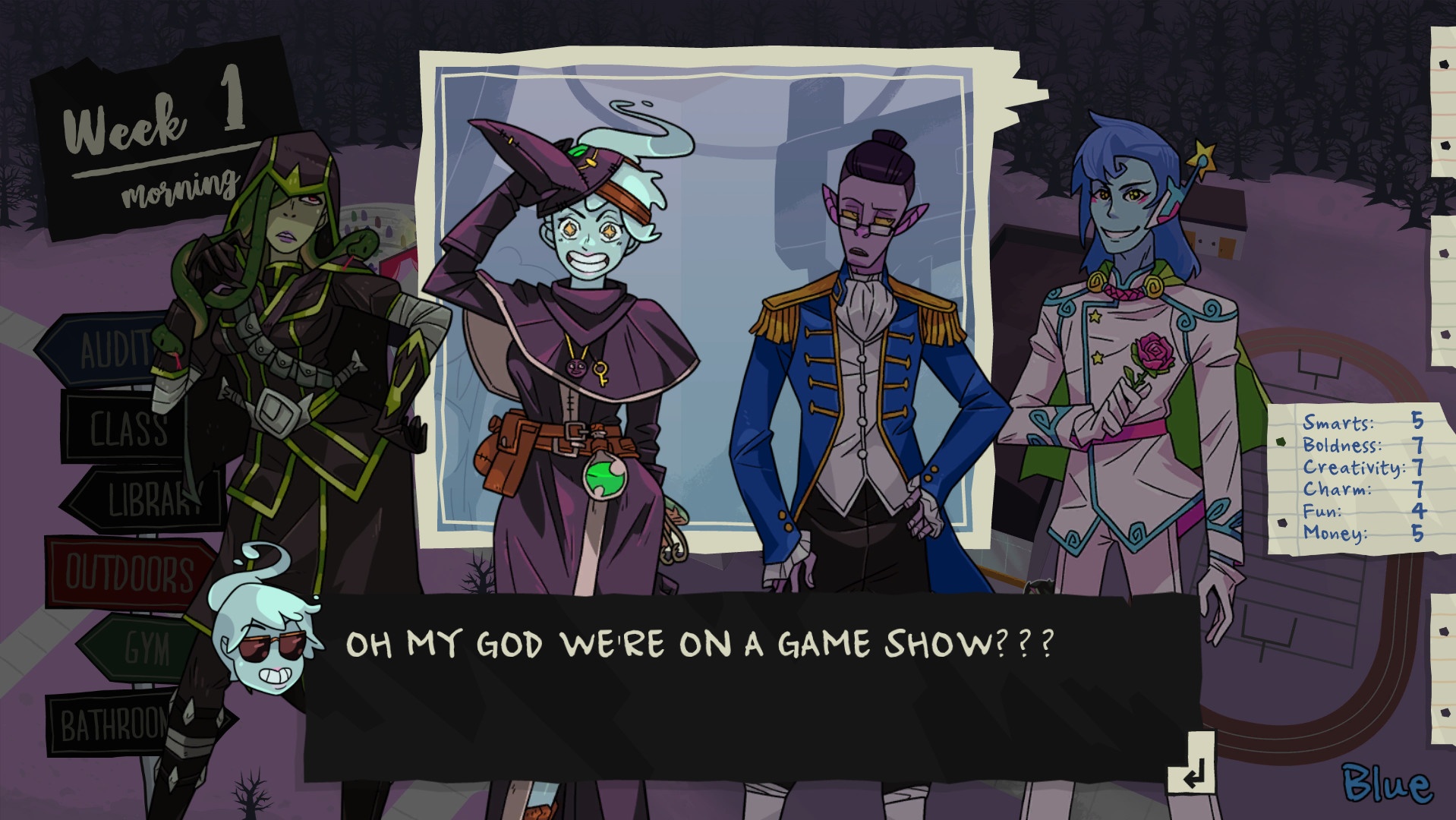 The Visual Novel genre is not a category that I often choose when it comes to gaming, but my appreciation for strong storytelling and fantastic art styles has kept me coming back time and time again. Monster Prom is arguably one of the best examples of this type of gameplay that I have seen in recent years; it is definitely the best Dating Sim that I have experienced. The dialogue is top-notch, the characters are all unique and compelling, and the addition of a Multiplayer mode was novel and hilarious. I love that Beautiful Glitch incorporated character “stats” as part of the in-game dynamic, and that Monster Prom doesn’t spell out exactly what each potential beau might desire in a partner. There is some innuendo, but nothing so outrageous as to require an explicit content warning.

As an added bonus, the community is incredibly active, and the Devs often run contents, conversations, and announcements via their social media platforms. That sort of engagement is all too rare on the Indie scene, and as a huge fan of this title, and Indie games in general, I appreciate such hands-on interaction with the fans and community. If you’re a lover of Dating Sims, or even just Visual Novels with a fun twist, I cannot recommend Monster Prom enough. The extensive dialogue options and branching paths lend a lot of replay value, and the additional bonus of a Multiplayer experience lends to an intriguing, subtly competitive romp with up to four players.

An intriguing, subtly competitive romp with up to four players.