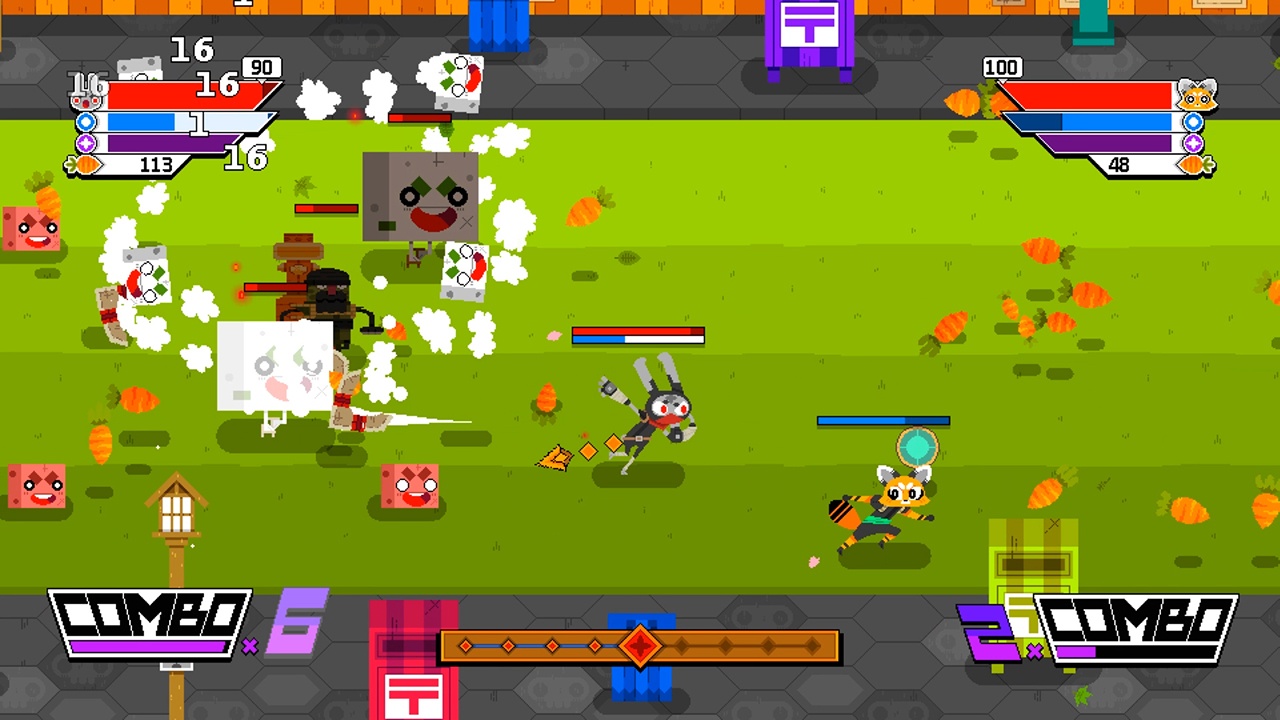 Ninjin: Clash of Carrots is one of the most curious titles that I’ve run across in my time with Switch reviewing. When I first laid eyes upon it, I was certain, beyond anything, that this was a mobile game port that had trooped over to the Nintendo pasteurs in order to try to grab some sweet, sweet eShop cash. However, after a further playthrough, I realized and came to appreciate that there was something special about this game, something that made it, as a mobile game, pop in a way that set it apart from whatever else might crop up onto the Google Play store. Only it wasn’t there. Nor was it on the iTunes shop. Confused, I did some quick searching and realized that this particular title was yanked off a couple of years back and has returned in a pristine, revamped and overhauled title exclusively for consoles and PC.

Pocket Trap and Modus must have been able to see the potential here, and it makes a lot of sense. Removing it from the mobile store invalidates and guts a lot of arguments that we’ve seen against mobile ports on the Switch so far, and the amount of extra content and upgrades are apparent from the drop. You see, Ninjin: Clash of Carrots is definitely a pick-up-and-play kind of game, and it seems only fitting that it finally see release on the most pick up and play of consoles.

You are thrust into the role of either a ninja rabbit or fox that used to reside in a quiet rabbit village, just enjoying life and carrots and such. However, an evil, crazed emperor and his shogun son, Moe, have decided to rob your poor little town of every last orange vegetable, leaving countless baby bunnies hungry and wailing with pain. As a ninja, you simply can’t let this go, and give chase to the fading caravan of bad guys and thugs-for-hire that have stolen all these veggies. Turns out there’s a lot of layers to this heist, including Moe’s own plans to rule the throne and a lot of people who are less-than-thrilled with this prospect. With a sword, a shuriken and unlimited stamina at your fingertips, you will dash, slash and bash the baddies back into oblivion and save carrots for everyone! After all, that is the ninja way! 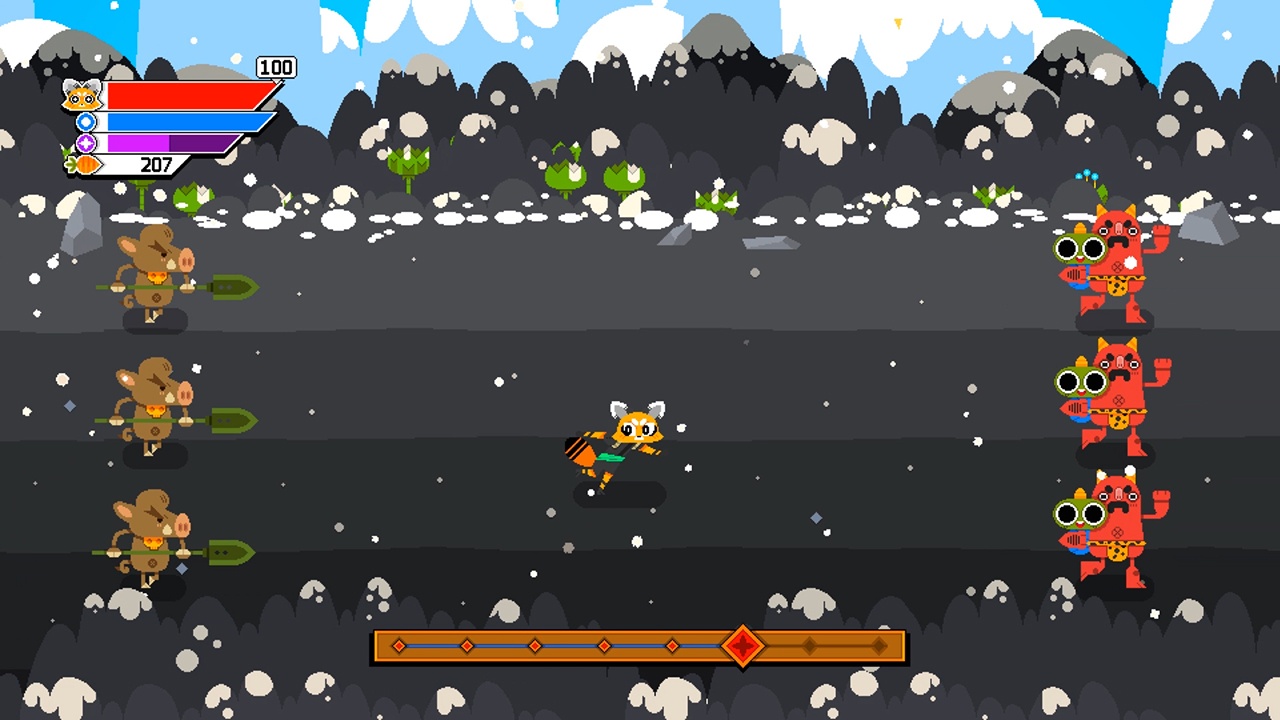 What sort of gave me the wrong impression about Ninjin: Clash of Carrots from the beginning was the presentation and style. Not that there’s anything wrong with it, but Ninjin’s graphics are done up in a very particular sort of pixel art that seems to be especially popular with mobile games. By utilizing slightly chunkier pixel draws, you can give the characters and items a good amount of definition and retro feel without having them heavily detailed nor making it a massive impact on performance. Things like Iconoclasts or Owlboy showcase pixel art in a way that elevates it into a new strata, but Ninjin’s graphics are a bit more down-to-earth in a way that sort of belied what it was capable of. The graphics are endearing, don’t get me wrong, especially the corgi that runs the weapons shop and some of the better weapon designs themselves, but it simply gave me the wrong first impression.

Additionally, for the purpose of gameplay and story arc, Ninjin has your character constantly running, which falsely made me think of an endless running game. In actuality, each level is divided into 8-10 waves of enemies, which is characterized by the mobs showing up from either side of the screen and moving in to attack your ninja. Your character can only attack one way, really, and that’s to the right, forcing you to constantly readjust and recalibrate yourself in order to get the strike in. You do this by moving up and down, left and right, but are given the impression of continually running (with a couple of small exceptions where waves pretend that your character is boxed in). You can only swing your sword to the right, but you can do a dash attack that allows you to strike left, as well as having shuriken that can be thrown in all directions. The tradeoff is that the shuriken do very little damage in comparison to the katana, and the dash attack relies on the dash meter, and you’ll want to have dash power at the ready if you need to make a quick escape.

The quick escape becomes your bread and butter, as Ninjin almost immediately starts ramping up the difficulty, at first, you’ll just have some dudes who can only attack to the right, same as you, and they run around and generally look silly. Then you come in with dudes in armor. Dudes with shields. Dudes who are straight up rigged with explosives and will conflagrate you the second you hit them with a sword. You got flying ninjas, rocket ninjas, ninjas that shoot fireballs, ninjas with bombs…there’s a whole lotta everything, and you have to deal with it all in a nice mixed bag. Bosses will eventually become just mini wave bosses that you have to deal with normally, and you have to deal with them all with aplomb and style. Hitting the bad guys makes them drop carrots of various size and value, and getting a strong combo gets you plenty of bonuses at the end of each wave, including some much-needed life restoration. Interestingly, you get an even bigger restoration bonus for not getting hit at all, but you don’t need it because you didn’t get hit…? I mean, it probably helps, but, usually, when you’re on a hot streak, you don’t need that boost. 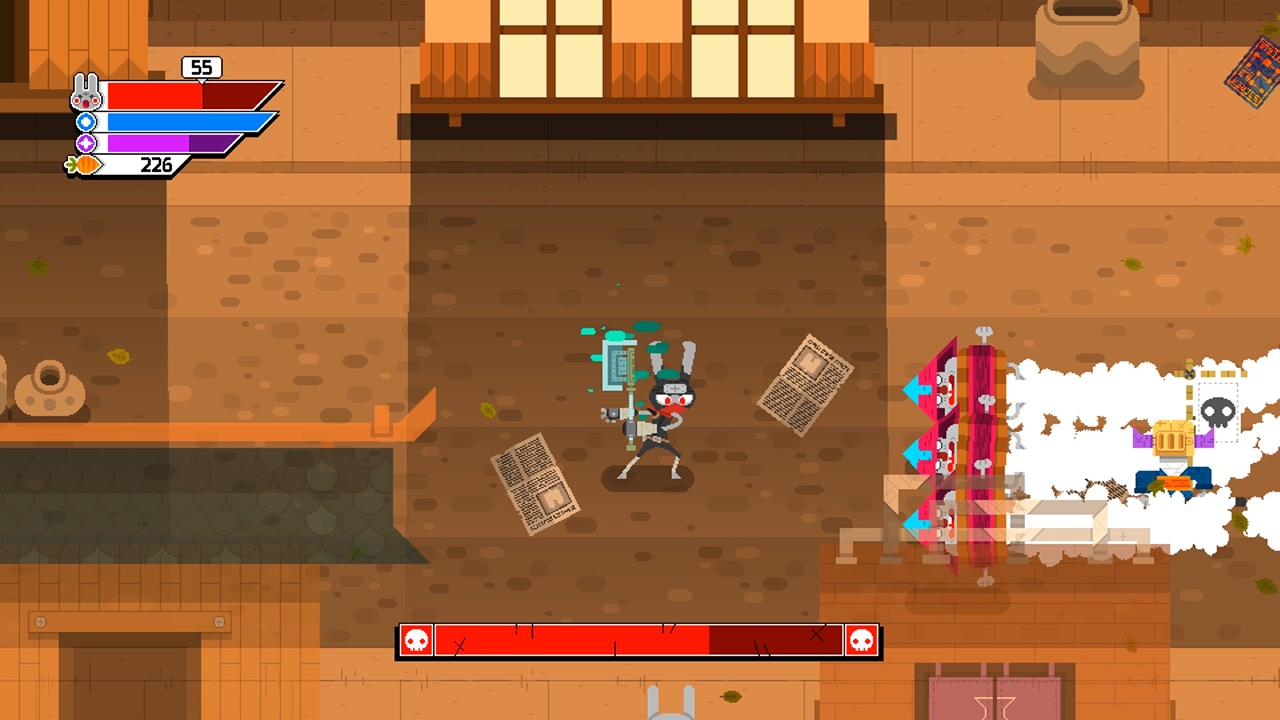 It’s surprising how in-depth and exciting Ninjin: Clash of Carrots becomes after only a couple of levels. You start to unlock new weapons, which are occasionally dropped by bad guys but often can be purchased from the Corgi that you save from the outhouse early on. The carrots are currency, and plenty of the weapons are not-so-subtle nods to great weapons and swords from other video games and even movies/tv shows. One of the first things I got was a tennis racket which put my katana to shame, something that I still can’t quite figure out but I didn’t care because it thumped so well. There are shuriken that have different attributes, like these awesome bouncing discs that do higher damage the more they keep bouncing off of enemies. I cleared a couple of potentially difficult waves by managing to get a bouncer in the center of a ring of enemies and just watching the damage exponent skyrocket. Plus, you can find/buy talismans that lend passive boosts to your ninja, like increased health or a temporary shield.

There are a ridiculous number of weapons to find, purchase and unlock, and some are only gotten through this nifty “TV Show” competition that you can find on the map after about level five. The endless wave approach rewards you for surviving every ten waves with a permanently unlocked piece of EQ, plus all the carrots you can carry from the baddies you destroy. This mode is probably my favorite, because I didn’t have to deal with the occasional potty humor that was hurled at me by the mediocre villains (seriously, who uses “poop head” as an insult anymore?) and it was something that you can jam out in a few minutes. When you really get into the dash and strike mentality of the game, this is a perfect spot to exercise your skills and get paid for it.

Overall, there’s a seriously solid amount of replay value baked into the game. Playing as either rabbit or fox gives you a different feeling and style to the game, plus some great opportunities to customize each in a dynamically set way. There’s two player co-op mode, which works out well in stronger stages (and makes the TV blitz a seriously fun occasion). If you’re a completionist, you could be looking at days upon days of invested time to try to get all the different items from the shop, not to mention just trying out what works best for you out on the battlefield. I personally feel that anything heavier than a medium weapon is a waste of time, but hey, I’m not a precisionist, I’m a button masher. The point is that Ninjin: Clash of Carrots is enjoyable, cute and not just some mobile port, but a seriously well thought out, excellently designed update and upgrade to what may have been a passively good game on the phone, but a truly enjoyable one on the console. If you’re at all interested in some serious gear grinding, short rounded gaming, then give Ninjin a twirl.

When the best weapon around is a massive carrot sword, things are definitely going in the right direction, and Ninjin is fun, frantic and a joy to behold.