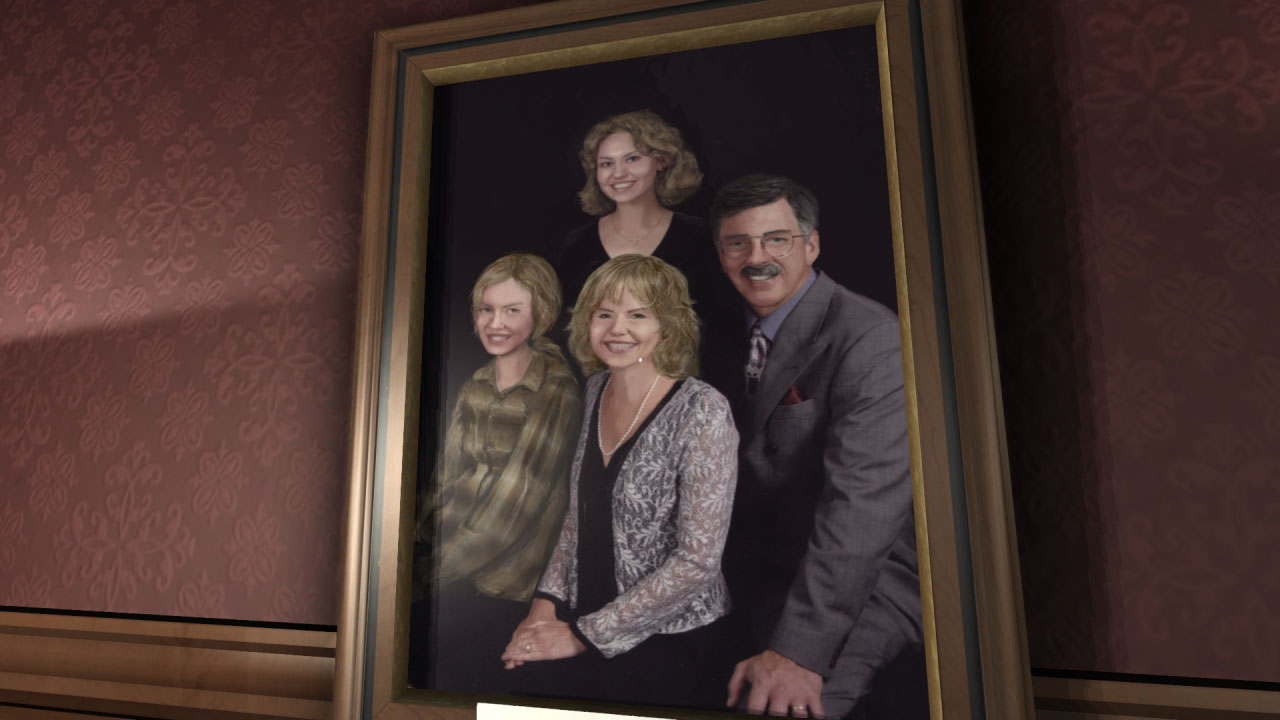 Gone Home is one of those titles that many of you may have heard of over the course of the years if you’ve had any interest in the indie games scene. Just over five years old now, it’s been lauded and praised in various circles, both gaming and artistic, for it’s storytelling, gameplay presentation and dramatic styling and effects. Truthfully, this is one of those titles that borders on the anti-game effect, playing out more like an interactive movie or novel than anything else. Still, the years have been kind to Gone Home in some aspects, but others…not so much. In any case, The Fullbright Company and Annapurna Interactive have worked together to bring the title to a whole new group of players, and we now take a look at Gone Home for the Nintendo Switch.

Gone Home is a period piece, set in 1995, and puts you in the first person perspective of Katie, who has been enjoying a trip around the world, seeing famous places globally before returning to her home in Oregon. Only thing is, the house is, well, empty. The only thing that seems to have been intentionally left behind is a note on the door, from Katie’s sister, begging her not to look into what has happened. This, naturally, only makes Katie curious (and also, what the hell else is she going to do, it’s Oregon, at night, in 1995) so she enters her massive, abandoned house to figure out what’s going on. Over the course of the next couple of hours, Katie is able to find out that all the members of her family – mother, father and sister – have been keeping secrets, some deeper and darker than others, but it was the sister, Sam, who dropped the bombshell that changed everything. Strangely, it’s not the reason the house is empty: that just seems to be bad timing and coincidence. Still, Gone Home’s purpose is to paint a picture of what can happen to a family when everything just comes to a head, and what a picture it is.

What The Fullbright Company has concocted for players is a first person exploration of a beautiful, gigantic home somewhere in the Midwest that, despite early trepidation, is definitely not haunted. Seriously, after everything else that has come out on the Switch, you’d expect a couple of jump scares or evil spirits, but the only times I freaked myself out were a.) ambient nature outside and b.) when I forgot that I had turned on a light in a room already. In any case, your objective is to go through the home, room by room, seeing what objects you can pick up and interact with. Similar to Layers of Fear, plenty of things can be picked up, turned over, examined and then put down (or hurled around for comedic effect). When an item is important, it automatically goes to your inventory. Otherwise, you just hold it gormlessly until you choose to release it. 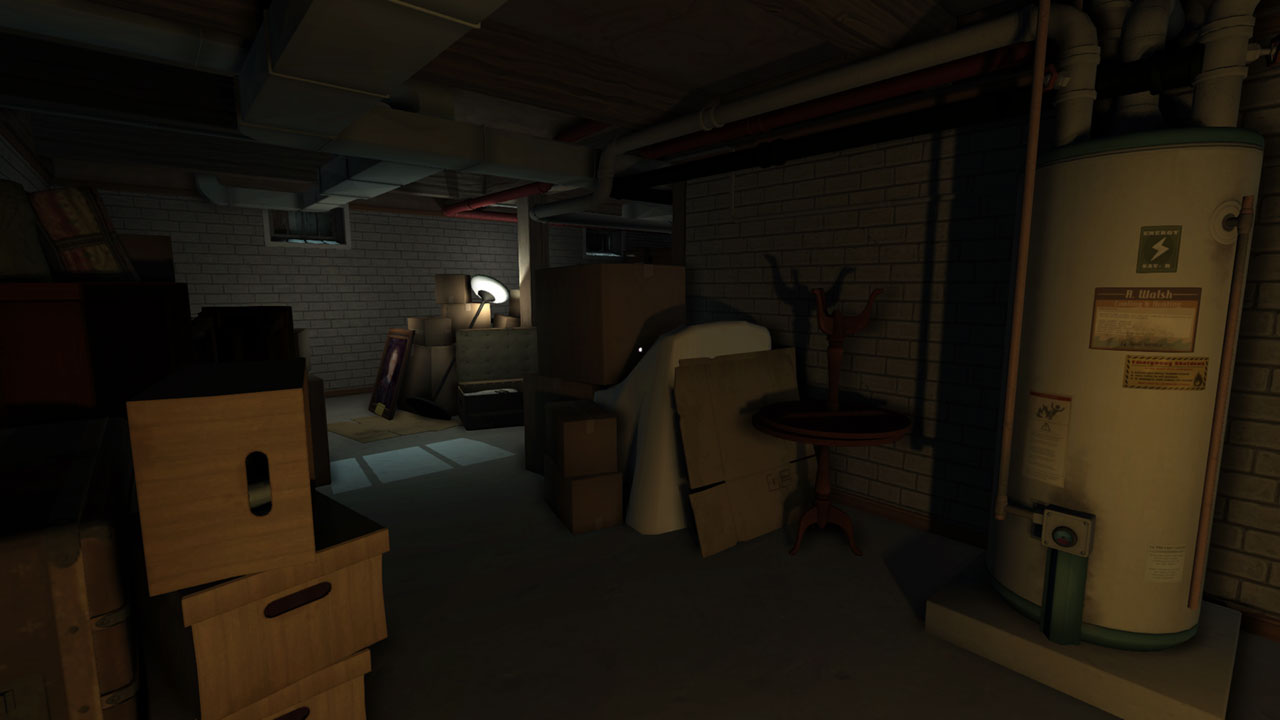 The game is also touted as having no puzzles, but that’s not necessarily true: in order to unlock the “ending” of the game, you will need to find a key, and the key isn’t just hiding in plain sight. There are actually a few moments when you’ll need to find some information and use that to access another thing, which I would argue is textbook puzzles. In any case, the first time you play Gone Home will definitely be a matter of trial and error: even entering the house to start the game requires figuring out there the key is hidden. After you make it inside, it’s up to you to find clues strewn throughout the house to figure out where you might want to go next and, ultimately, how to get into the attic, where absolutely nothing is answered but everything is culminated.

It’s important to note that, at the time of creating Gone Home, the execution of the 1995 aesthetic was perfectly wonderful, from the soundscape to the timely items that you find around to give it the best ideology of what American life was like. The kinds of pictures plastered to the locker Sam has in her bedroom, the brands of books and magazines you discover throughout, the lack of digital communication that prevents the mystery from instantly unraveling. Seriously, if this game had been set just five years later, Katie could have made three phone calls, gotten all the details, and then it would have been her watching a DVD of Never Been Kissed while eating some ice cream. Instead, you have the family photo from the late 70s/early 80s with dad’s moustache and mom’s big hair, a VCR that’s mostly useless but still interesting to see, and a fascination with home photography development that is mostly associated with hipsters nowadays. Additionally, setting the story in the mid 90s, in the Midwest, makes Sam’s big revelation all the more powerful and gives you a better idea of what a shockwave it must have been for the family.

Gone Home does have a certain charm and interest to it beyond the main storyline. This is a title that gives you what you put into it, and the more time you spend exploring the home and figuring out what mom and dad were also hiding gives you a greater sense of dysfunction and vulnerability. What seems like an innocuous copy of Leaves of Grass under the bed becomes a greater representation of the slowly fracturing marriage that sat under this very home. All the different kinds of boxed up material isn’t from someone just moving in, but possibly someone getting ready to move out. And I especially liked the red herring of a splattered bathtub that could have easily been misconstrued as a violent act unless you take the time to pick up the bottle nearby and trigger a vocal cue from Sam to let you know what really happened here. Oh, that’s right: you know you’re making progress whenever Sam’s voice cuts in to tell you a bit about her memories and emotional state at the time. They’re the closest things to progress markers that you can find, but none of them need to be gotten, nor even gotten in a specific order. They’re just little, wistful, sad chunks of your sister’s memory, left around to give you better insight into her life. 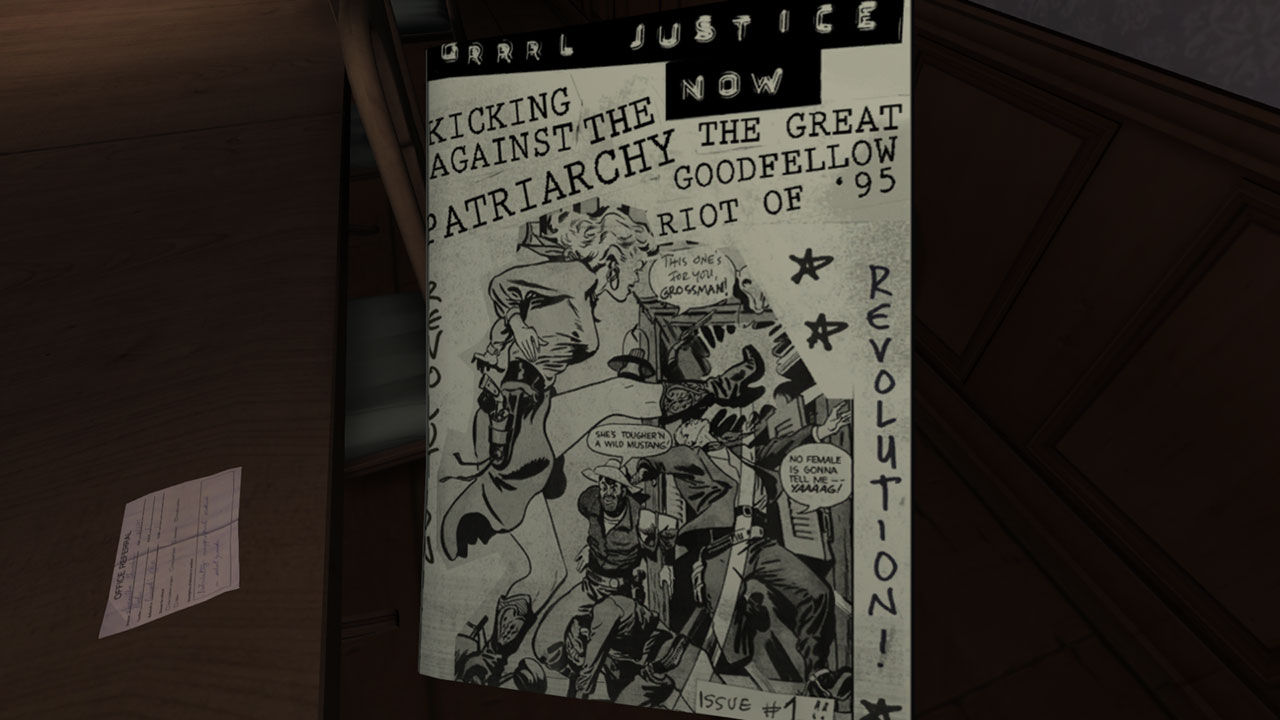 If you successfully accomplish your goal of making your way into the attic and “finishing” the game, Gone Home has a ton of modifiers to let you replay the experience. The obvious addition to try is the director’s commentary, which will override Sam’s diary entries BUT will give you some fascinating insight into the development and mentality that went behind the game. You can also make the game “easier” by turning on all the lights, unlocking all the doors and toggling a map of the house on and off.  If you’re determined to find everything that you might have missed from Sam, by all means, activate these little dealies and see the home under bare, open circumstances, but it does take some of the fun out of exploration. Additionally, you gotta beat the game once before you go off the rails and start playing God with the house. But, if you’re like me and dead set on filling up a single bathtub with all the loose toilet paper rolls in the house before turning on the water (which does NOTHING, sadly), the modifiers are the way to do it.

Gone Home is an interesting title, an engaging one, but not necessarily one that I’d consider a visceral need in my life. It’s been quite a while since I last played, and it was refreshing to come back and view the home through new eyes, now that time has passed and the dust has settled. For people who are positively in love with the game and want to support the developers, this is a no brainer to grab it and have the director’s commentary and awesome soundtrack wherever you go. If you’ve honestly never played Gone Home before, it’s worth a jaunt: the narration is honest and raw, the style is unique, and it’s definitely one of the better walking simulations that I’ve engaged. If, however, you’ve already played this game to death and were left just sort of “meh” about it, there’s no reason to grab it again. It’s optimized, looks grand, but there’s nothing here that’ll set your world on fire again. Strangely, it seems like you really can’t go home again.

Coming home to rural Oregon is never easy, but having an empty house makes it a tad harder. Thankfully, there aren’t real ghosts here: just spirits of sadness.