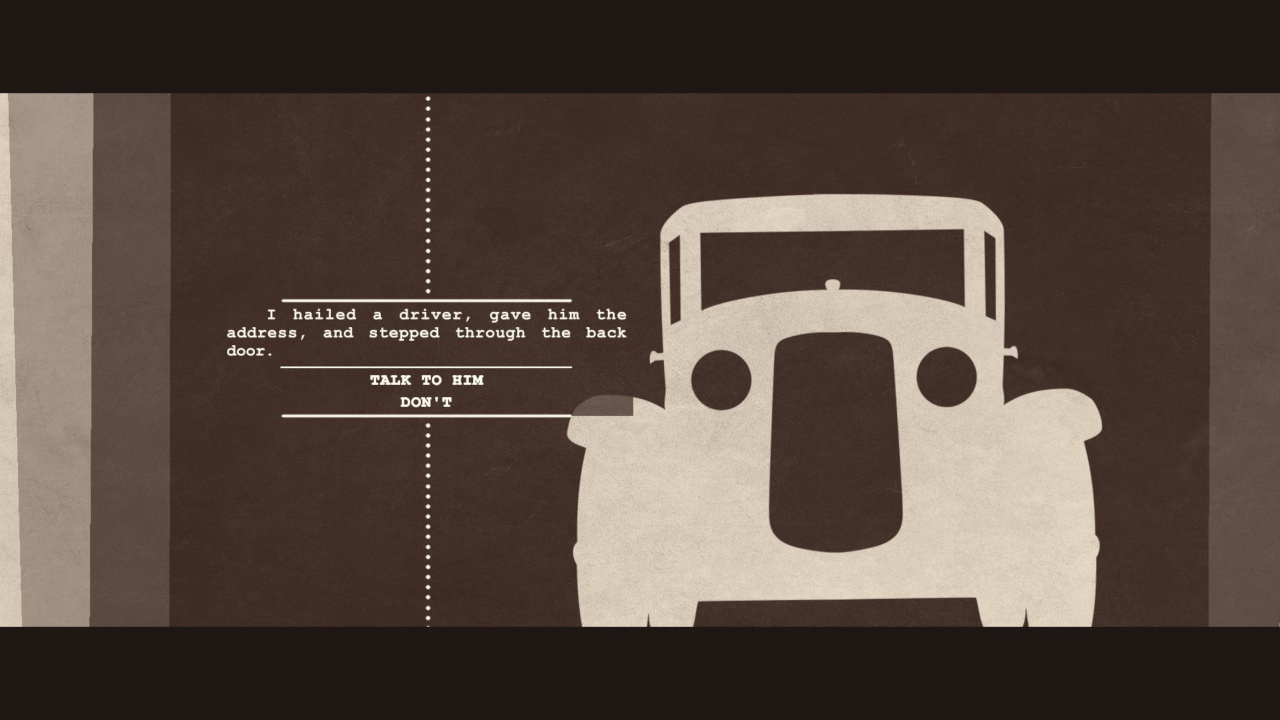 The 1920s in the United States were like a waking dream that the people of the time were rudely jerked out of when the 30s came rolling around. Sure, there was plenty of terrible oppression at the time, both on the parts of females, nonwhites and literally anyone who wasn’t a straight up WASP, yet there’s a certain charm to the era and the mystique around it. It was a time of burgeoning jazz, of growing crime families that were birthed out of Prohibition, of a certain style of speaking and walking that carried authority, wit and unreplicatable uniqueness. You can’t take someone who did the fast-talking, mixed metaphor stylings of the 20s and drop them in a modern era without them sounding posh, insane or a mixture of the two. Yes, the 20s were a desperately terrible time in many aspects – I mean, it literally contains the Great Depression – but there was something almost fabulous about the underbelly of it all. And it’s this kind of element that Ben Wander successfully captures in his solo debut, A Case of Distrust.

Phyllis Cadence Malone is already an unusual character for 1924 San Francisco. She’s a woman, for one, who seems perfectly content to live alone and provide for herself. Additionally, she’s a private detective, one who used to work for the force before parting ways under less-than-ideal circumstances. Against her better judgement, she starts one faithful day picking up a job to help a local rum runner who’s just gotten a death threat, and she should always trust her judgement. Very quickly she’s spiraling into a murder case, and the list of suspects grows progressively longer with each stone she overturns. Who is the culprit: the rival speakeasy owner? The secret organization who appears to have threatened him? A jealous wife with the wrong idea? Or someone else entirely? PC Malone has a lot to unravel, uncover and straighten out on her quest for the truth, and, along the way, she just might be able to work out some of her own mysteries about herself, her family, and her dead mentor. 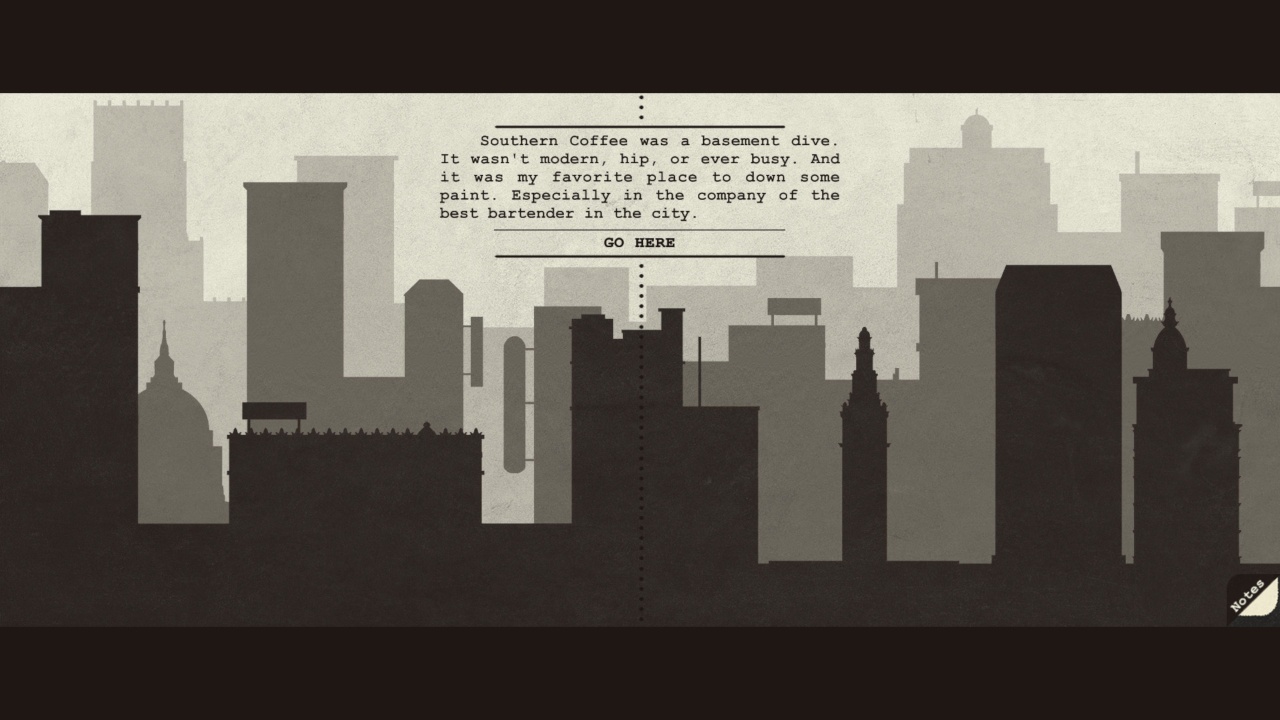 A Case of Distrust, first and foremost, is one of the most visually stimulating games that I’ve ever laid eyes on. Clearly a clever interpretation of the classic detective noir genre, the game has a sense and style about it that feels like an infinity box: no matter how many times you fold it or flip it, you never seem to reach the end. Each sequence of the game bursts out or folds in on another, giving a sensation of being stuck in a perpetual opening credits sequence to a highly anticipated and exciting mystery movie. The colors and layout are a brilliant blend of shadows, shapes and empty space, creating just enough outline and detail to indulge the player, but leaving enough ambiguous for each person to have their own idea of exactly what a character, setting or device might look like. Ironically, the only person who really feels flushed out is the cat that wakes you at the very beginning of the game (and with good reason). For many people, the sheer presentation of A Case of Distrust is enough to get you hooked and pulled in, but the game goes so much further than that.

As you may have guessed, A Case of Distrust is set up in a detective investigation sensation, cobbling together the most intrusive elements of LA Noire, the Sherlock Holmes games and a dash of Phoenix Wright. Every single item that you encounter, place you enter or thing that a person says will end up in your meticulous notebook, along with a short excerpt from what the person officially said or what the description of the item officially was to help jolt your memory. As you move along, the ideas and appearance of things will become your arsenal, and you’ll have more and more things to sling at your allies and suspects alike. When someone offers up help, pick nearly anything that was shown to you or said at you to see if there’s more to it that our stool pigeon might know. If someone says something that doesn’t sit quite right with you, bring forward the quote that refutes their claim and shove it in their faces. People don’t always like being called out, but doing so gives you the necessary leverage to get the truth out of them. There can’t be a single thing that’s put into your presence that might not, surprisingly, help you along with the grand reveal at the end, but why not test your mettle and really see what buttons you can push? 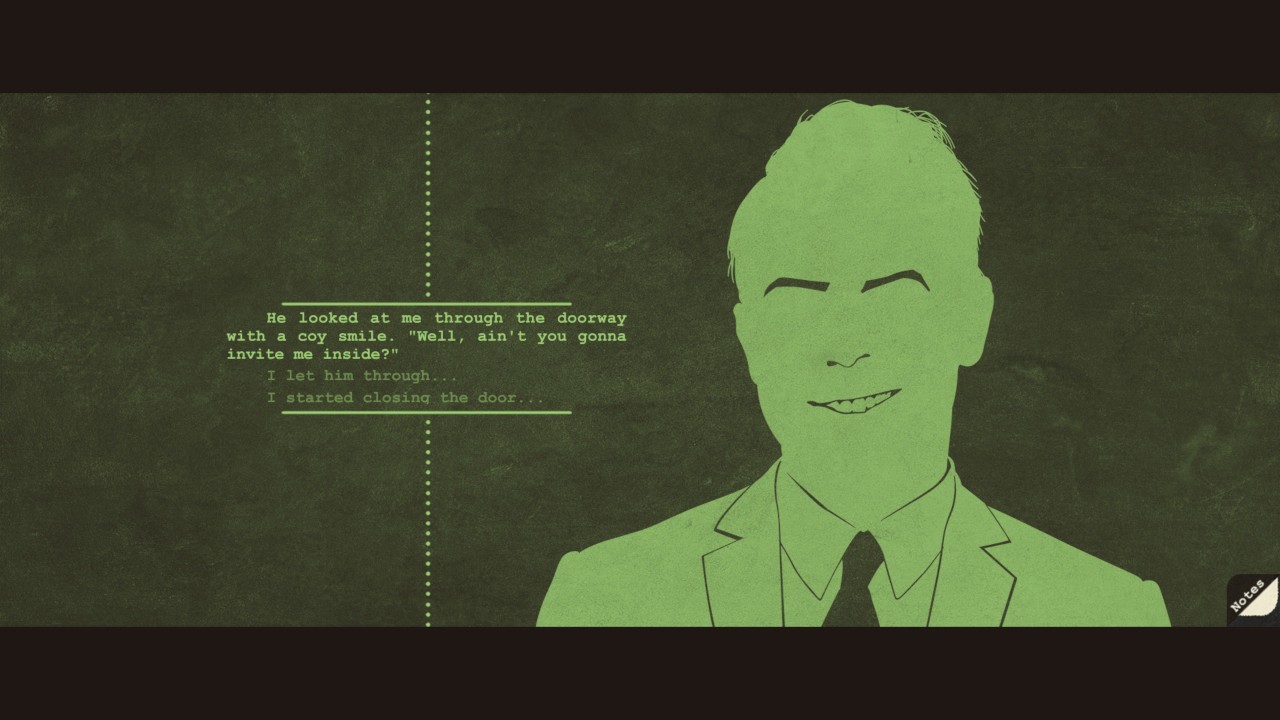 If the game were simply that – just a series of interviews that may or may not give you further evidence – then it would be a flatter version of Her Story. However, Ben Wander does inject a positively brilliant element to keep the fire burning and the cohesion strong: the atmospheric creation. There is just enough realism baked into the game to keep you firmly tethered in the time frame and the era of Malone’s investigation. Sure, simple things like newspapers talking about Russian deaths or a fixation on Felix the Cat cartoons would have been enough, but there’s this almost imperceptible sheen that’s lightly painted over everything to really give it the dirty gleam. That sheen comes from Malone herself: the way she monologues every downtime moment between the interviews and discoveries keeps the story alive and real. It’s a fascinatingly accurate and original take on the self-aggrandizing efforts of the old black-and-white detectives that has a bit more of a bite and cut to it. Maybe because Malone just has more personality than most, and maybe because her story is more unique than the average smoky dick with a drinking problem and a long-lost gal. I mean, yea, she’s got a drinking problem, but it was the 20s: what else are you gonna do?

A Case of Distrust is over in a matter of hours, but it’s a damn memorable experience, and one that’s exciting to embark on and full of twists and turns in a narrative sense. Once you get down the mechanics and understand the way to confront people, debunk their nonsense and really make them sing, you’re in it for the long haul. The art style is amazing, I love the soundtrack, and the period piece that is 1924 San Francisco comes through in glorious shadows and smoke. This is a great tale from start to finish, and I highly recommend it to the visual novel crowd, the mystery crowd and anyone who just enjoys a good story all around. You gotta hand it to Mr. Wander: he’s certainly made a product that stands, proudly, as a real innovation in the indie community.

A Case of Distrust Review

Of all the video game consoles in all the worlds, this game had to download onto mine.