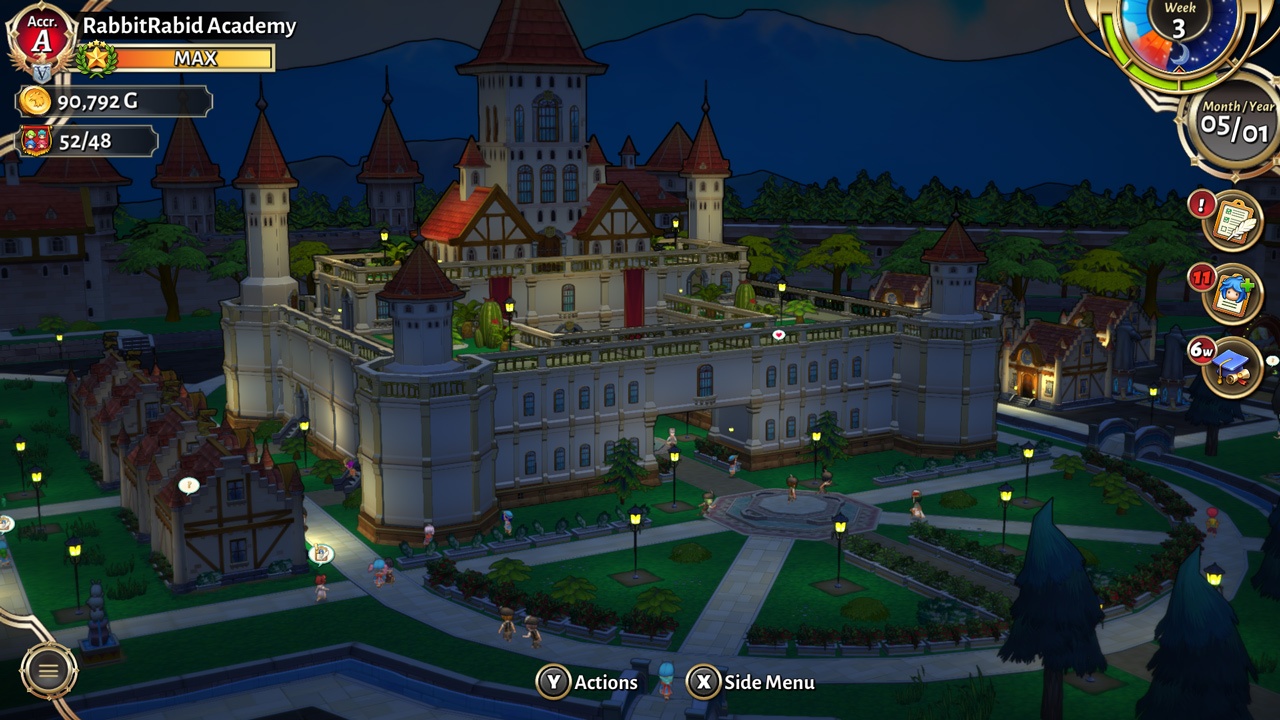 Did you know, that behind every story lies another? For example, role-playing games tell a story that revolves around your protagonist’s being, the fate of kingdoms or princesses and the heroic journey. However, whatever you may learn through the narrative of the game’s story, there’s always another untold one behind it, such as the origins of some characters, places or events. We know that they are there, we are told so or even shown, but they’re often only touched on and not delved into in any great detail. Well, now you can experience for yourself the origins of our great, role-playing heroes as you teach, train and transform everyday students into the next heroic character of the future in Valthirian Arc: Hero School Story as it builds a release onto the Nintendo Switch.

Developed by AGate Studios and published through PQube Games, this hybrid title brings a combination of multiple role-playing styles, and mixes them together with a sprinkling of micro-management and facility building to bring a simplistic, yet highly enjoyable simulation of running your very own school for heroes. The story revolves around the allianced kingdom of Valthiria. As the new principal of an academy for role-playing heroes, it is your job to build, upgrade and manage the day-to-day running of your facility, as well as develop and train its students in the arts of being a warrior or mage, sending them on a series of missions and at the end of each semester, selecting one to graduate so that they can embark on their own adventures and find the new, heroic stories of the role-playing games we have all grown to love.

In terms of describing the game as a whole, it’s probably easiest to liken it to being Professor Dumbledorf as you run the infamous Hogwarts and develop the next generation of heroic characters; at least, in essence that’s is how it feels. However, you’re going to have to rely on a lot more than the magic of Harry Potter to succeed and luckily, you have a selection of back-room staff to rely on to help you get the job done; as well as the retiring former principal who is always hand to give you advice. There are a number of levels on which the game runs, the first of which involves building, expanding and upgrading the present facilities of your academy in order to get the best out of your students, as well as prepare the facility for any new intakes of potential students. 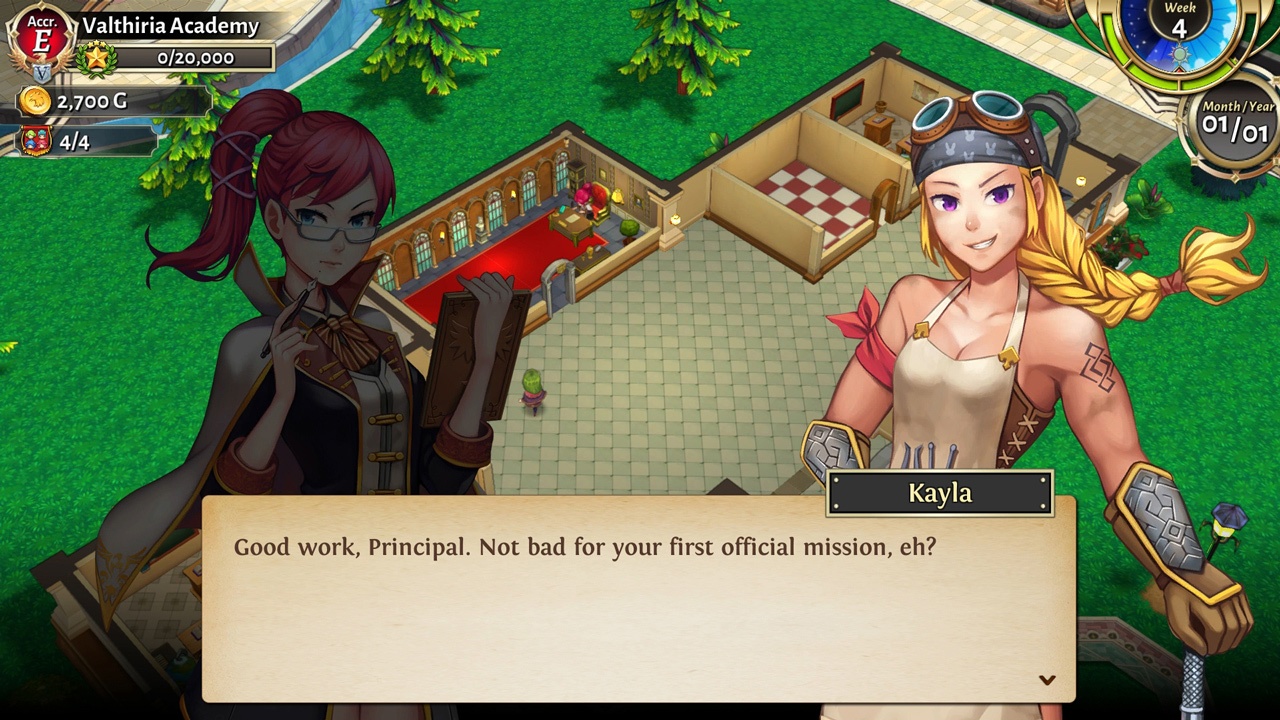 However, in order to produce a school that shines, you’re going to need resources to fund your projects and develop your students. In order to accrue the necessary materials, you need to help the citizens of Valthiria by sending out your students on a series of tasks, or create your own party of four and take on a variety of adventures yourself. By defeating monsters, completing tasks and exploring the landscapes, you can accrue gold and scrap metal, as well as weapons, armour and potions. These can then be used to upgrade or create more rooms and buildings in your academy, or craft new weapons and armour for your students. The more resources you have in your school and the better equipment that you craft, the stronger and more tactile your students become.

Both elements of the gameplay work hand-in-hand with each other; each one complimenting the other with building the biggest and most successful academy in the area. It all works through a series of menus and locations that work specifically for the job that you require. Need extra classrooms, then build them; need new weapons crafted, then visit the blacksmith. Although simplistic in its look, the amount of options available can seem daunting at first. However, with experience and experimentation, each of the options and their functions soon become second in their nature. This can contribute to a slow start, at least for the first couple of hours, but once everything begins to fall into place and the academy begins taking shape, the game begins to open up to produce a fascinating experience in preparing your school and students for their own role-playing adventures.

Following in line with other aspects of the game, the aesthetical presentation is simplistic in nature, but one that isn’t basic in its look either. The sections of building and developing your academy look suitably impressive, with plenty of room and scope with which to build some spectacular looking buildings. From a grid-ike menu, you can select from a variety of rooms and buildings that contain a set figure in their size and by moving a specifically-sized cursor around the academy’s grounds, you can find a suitable plot on which to build. Everything here starts off with a basic building, even one that doesn’t yet have a roof, but as you begin to accrue materials and develop further builds, you can soon produce a majestic playground for your constant intake of new students, as well as existing ones in order to develop their skills. 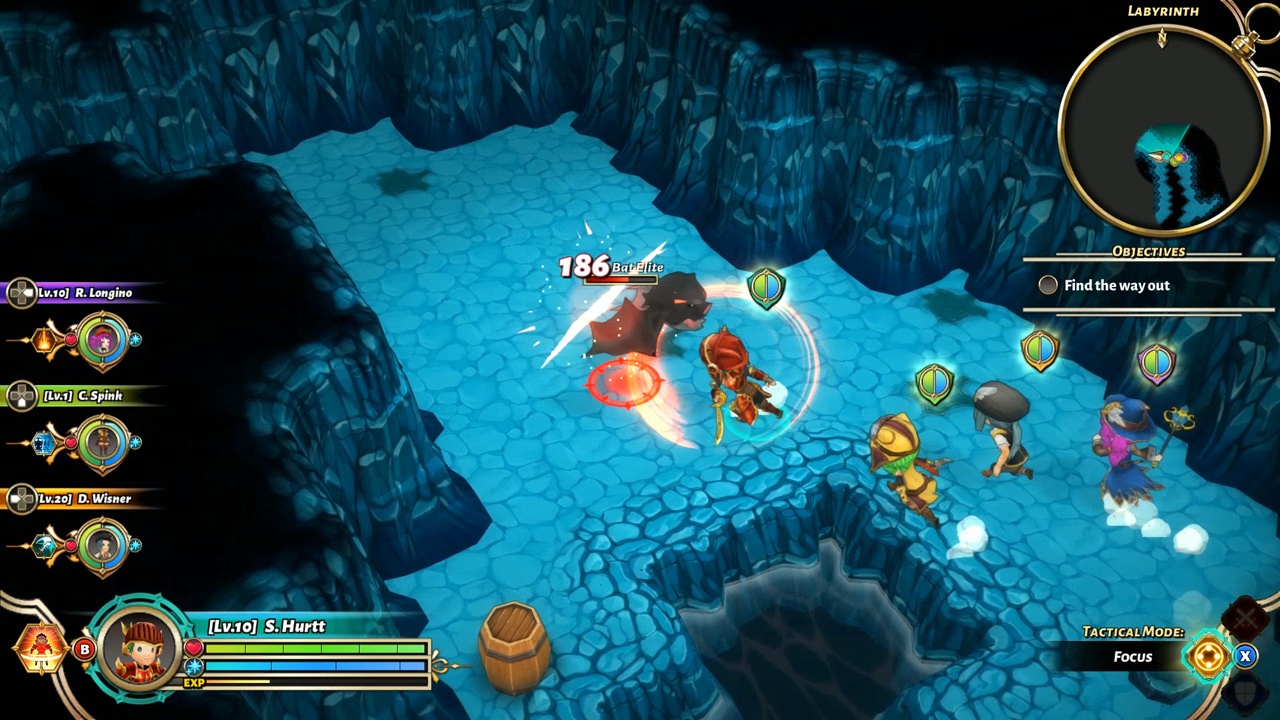 Students also become a very important asset, as teaching them in the arts of their profession, developing skills and outfitting them with bigger and better weapons and items, allows you to send them on ‘errands’ which can gain your school valuable experience, money, fame and commodities with which to develop further. These errands, or side-missions, are controlled by AI mechanics. However, you can also create your own parties of up to four students and take them yourself through a series of adventures; more of which I’ll cover shortly. The more you build and develop, the more options you have with how you determine the skill-sets of your students. Need a warrior or a mage? Then you can easily develop students to learn their arts. If your academy contains certain facilities, these can also grant special bonuses to experience and items, allowing you to further develop your students into more powerful sub-classes such as scholars, paladins or harlequins.

Outside of the Academy, adventuring missions are undertaken with a select party of four students. Viewed from a top-down, isometric perspective, you are tasked with finding certain items, or defeating certain monsters to fulfil the mission criteria. With the ability to switch between each of the party members, you explore the area, lifting a cloud of fog from the on-screen map as you accrue treasures, scraps and items that all go towards funding the next academy project, building new items or advancing the achievements of fellow students. Combat is real-time and, although basic in its premise, it still provides a satisfying element of the gameplay; especially with the ability to switch between characters and perform close-up melee attacks or long-range magical varieties.

Overall, Valthirian Arc: Hero School Story combines many of the role-playing elements into one neat package. With different levels of gameplay styles, from building and maintenance to embarking on adventures, there is plenty of content, scope and depth to keep players invested over the long-term. However, with an average of ten hours playing time it may not, at first glance appear to be the longest game, but with the five different alliances that comprise the kingdom of Valthiria, all of which you can join partnerships with, leads to a game that boasts a series of various endings. Although the game may start slowly for some, as well as the need to put in a lot of grinding, it soon opens up to produce an addictive formula that is easy to play; but only when you have mastered the options and upgraded students to a combative level. It contains a certain charm that keeps you playing, as you tweak the academy and maximise parties to fulfil your potential, but overall, it’s the knowledge of knowing that what you are doing is producing a new generation of hero and, ultimately, giving them a backstory that may usually remain untold as they venture forth on their own personal quests for glory.

Ever wondered where the origins of role-playing heroes began?