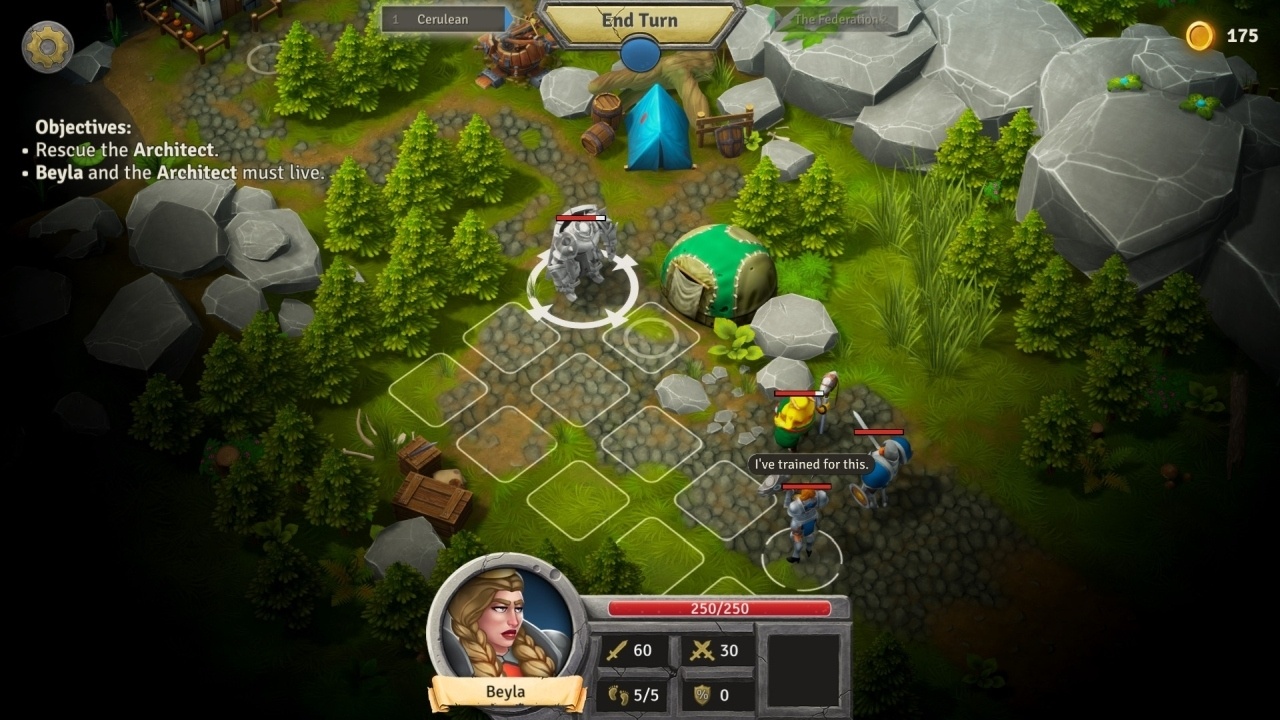 Since its release, the Nintendo Switch has become quite saturated within the turn-based strategy style of games. Although many of them contain varying elements within their make-up, such as a compelling story or a stellar graphical presentation, they all still remain within the rigid framework of their step-by-step style of play. The latest of such titles within the genre now comes in the form of Exorder, which although it may look similar to other games within its genre, does contain some interesting variations within its gameplay to try to bring something new to the table.

Developed and published though Fat Dog Games and Solid9 Studios, this tactical title follows the story of two siblings, Princess Beyla and Prince Tristan, as they compete against each other for the crown of the Kingdom of Cerulean. Following the death of their ruling father, the brother and sister go off to train in readiness for their duel. Once finished the pair face off within the tutorial section of the game and with the Princess being victorious, you play through the rest of the game as the ruling Beyla. Since his defeat though, the prince has taken allegiance with a neighbouring faction; a deed that has coincided with a series of attacks on the fringes of the Princesses new kingdom.

Played over a campaign of twelve, story-based missions, you take part in a series of epilogues and prologues to set the pace for the story that ensues. Although each of the scenes are voice-acted, it’s rather clichéd approach soon becomes predictable in its execution. Stick with it though, as the climax of the story soon becomes quite a thrilling affair. After the brief interludes of story-telling, you begin to work your way around a number of grid-like maps; although the way they have been designed and the landscapes in which you traverse rarely feel like they’re held within the rigidness of a grid-style level. As with the majority of turn-based games, you start off with a limited move counter, positioning yourself in a strategic way, before entering into combat. Any new elements that you may encounter are still explained in a tutorial fashion, as are some of the interesting mechanics that the game employs. 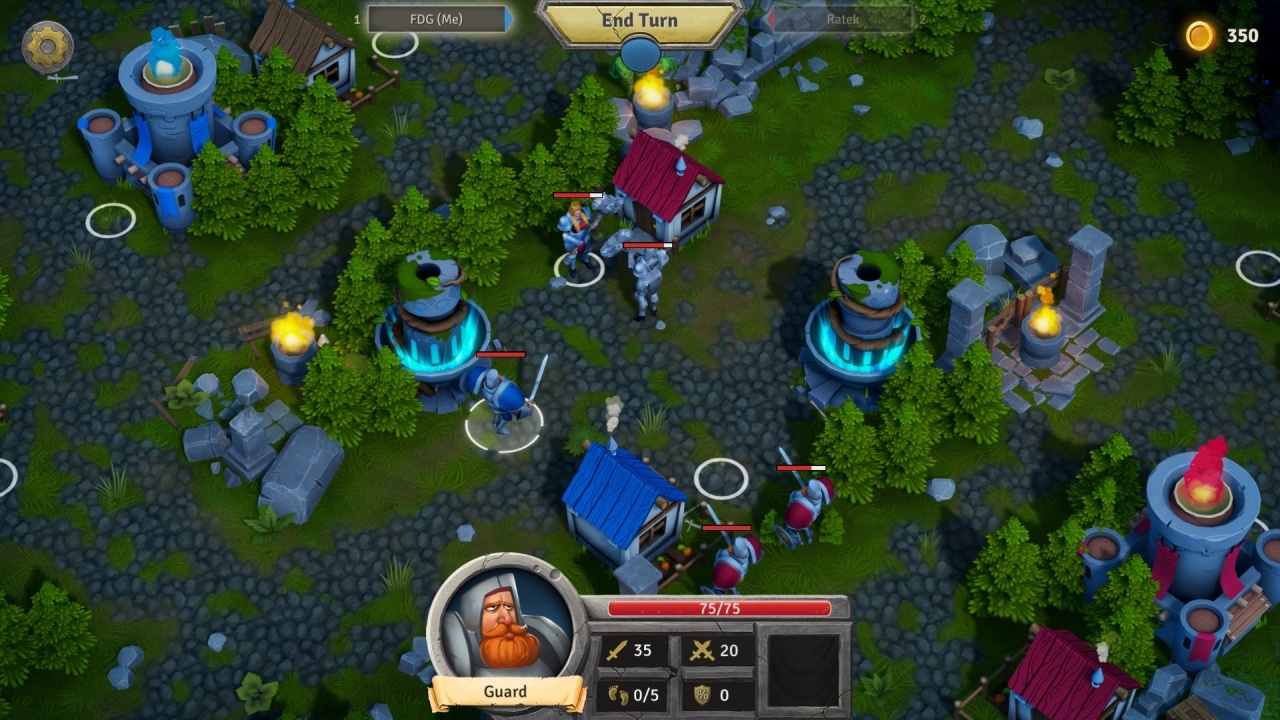 When it comes to combat, there isn’t anything particularly new, at least in terms of what abilities you can utilize. In fact, this element of the game is very bare-bones in its implementation. The first couple of levels are simply move and slash styles of play. However, as you progress, you begin to learn of other mechanics, such as taking over buildings, health regenerations and the need to buy extra soldiers to fight for your cause. Whenever a building is present on the level, a marker displays at the entrance to each dwelling. Should the building be occupied by enemy forces, then it spawns extra creatures that need to be fought; accrue the building for yourself though by standing on its marker and the enemy can no longer spawn from there. Instead, they offer a healing property at the start of every turn, as well as provide extra clansmen, from over ten different varieties, to fight alongside you; but only as long as you have the funds to do so.

It all adds a nice layer to the strategic values of the game, forcing you plan tactically in how you approach each level. However, due to the nature of spawning enemy types, or friendlies even, the game is very unforgiving quite quickly. Before you know it, you can become quite overwhelmed in enemy numbers compared to your own party; even more so should you not have acquired enough gold to recruit new members to your cause. This can soon become quite frustrating, not just to being outnumbered, but also in being outmanoeuvred, as the game doesn’t contain an ‘undo’ mechanism should you make a mistake with your placements or tactical decisions. This is further hampered by a soldier’s inability to move after it has performed an attack.

Although careful thought and planning can help alleviate these problems, the control mechanics in moving your cursor for selection and positioning is particularly ‘floaty’, making it difficult to select certain squares or characters; let alone move them to a desired location. Unfortunately, more often than not, the free-flowing nature of the cursor caused me more headaches than my own personal tactical choices; even within the game’s ability to provide touch-screen support in the Switch’s handheld mode. In order to be successful within each of the levels, you are given a set requirement in mission parameters that need to be fulfilled in order of operation. These can range from taking over a certain building to defeating a certain enemy. Although nothing here is too difficult to achieve, at least in terms of their instruction, again, the ruthless AI can make this a very challenging prospect. 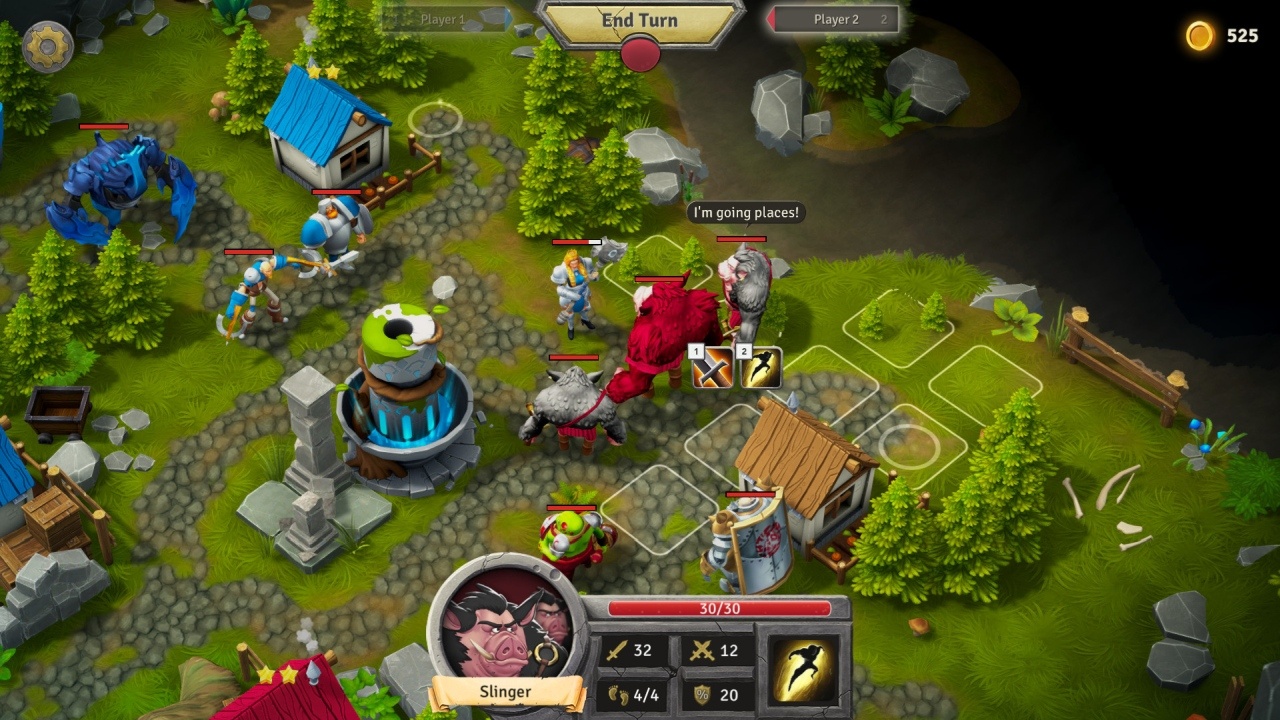 Despite the game’s best efforts in providing instruction to what you need to do and the mechanics of how it plays, there are also instances where not enough information is provided; leaving you to guess or figure out the best way forward. This, coupled with the ease of becoming over-run, can lead to some frustrations as you continually fail a level through no fault of your own. It’s only through constant re-tries and experimentation that you finally learn of how things should be done; but in terms of how a game should operate, it’s a largely unnecessary feature. I’m not saying that this is a particularly bad game, or even a broken one, but more of a game that isn’t an ideal entry point if you’re looking for your first turn-based strategy game. However, seasoned players of its genre might appreciate the challenge here.

As well as a single-player offering, the game also contains a multiplayer element that comes with a number of options and play styles. With PC crossplay, you can fight against other, ranked players over a series of varying maps. The general core of the gameplay remains the same here, by defeating your opponent to rank up on the online leaderboards. You can also create custom games that cater for up to four players, both in an online or offline capacity. Worryingly though, despite the game being out for a few days at the time of writing this review, I was unable to find or execute any of the online components, although its local element provided a good experience with no technical issues or framerate drops.

Overall, Exorder is a solid entry within the turn-based, tactical and strategy genre within the Switch’s library. It’s presentational values are high, with a colourful and detailed aesthetic that reminded me somewhat of my World of Warcraft days. In terms of gameplay, there are some offerings of variety that differ from the usual frameworks of turn-based play; offering a very different style in how you approach the battles. However, despite containing some basic elements, this is a game that becomes very gruelling, very quickly. In terms of this, I do feel that this may be a premise that turns away newcomers to the genre, or younger players, as they could lose interest pretty fast. However, it’s a game worth sticking with, as for seasoned players or through more play time, this can become a rewarding experience that offers plenty of replayability with its challenge maps and multiplayer capabilities. This isn’t a game that brings anything new to the genre, but it’s certainly a game that brings something different and is most definitely well worth a look if you’re a fan of the genre.

A solid turn-based strategy game that, whilst not bringing anything particularly new to the genre, does bring something different.