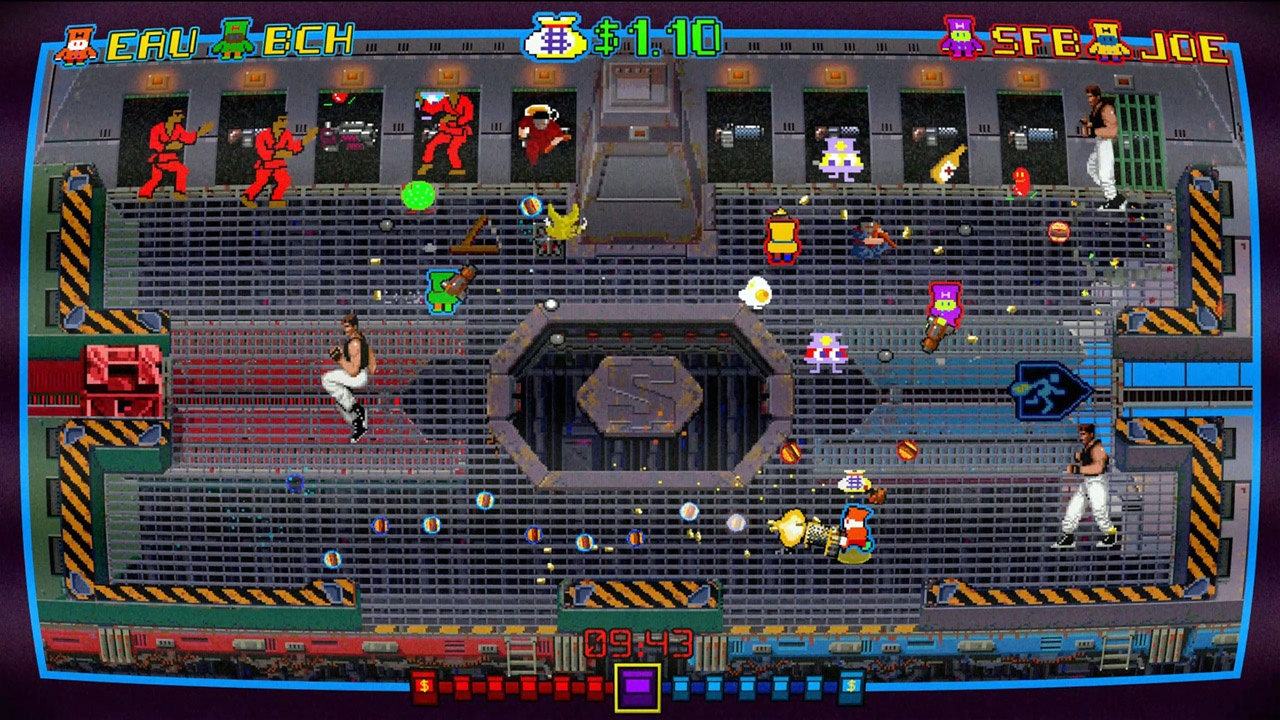 When Johnny Turbo and Flying Tiger Entertainment suddenly started bringing arcade classics from Data East to the Nintendo Switch, there didn’t really appear to be any kind of “plan.” Sure, we were getting a steady influx of great arcade experiences from the 80s and 90s, but that, in and of itself, appeared to be all that was going on. We got to play the better versions of Burger Time and Bad Dudes, we got to see what Two Crude Dudes and Express Train were like, and we generally had a good time in the process. But, as it turns out, there was a deeper plot at work, and the end result is something completely insane and surprisingly addictive. For their first original title ever, Johnny Turbo and Flying Tiger proudly present Heavy Burger.

Heavy Burger is a true arcade experience, both in terms of gameplay and the literal framework of the game, in which players must go, head to head, in a challenge of classic scenarios and semi-modern gunplay. Two teams, potentially up to four players, must get the bag of money from the launch position inside a futuristic factory all the way to their respective bank at the other end of the arcade. However, in order to get there, they have to fight their way across several of Data East’s most influential titles, including Heavy Barrel, Burger Time, Bad Dudes and more. Each of the worlds presents its own series of challenges to navigate, from giant minibosses trying to smack you down to random karate students practicing in the park. It’s a perilous trip, but you’re not doing it unarmed: your chef (by the way, your character is a chef) is equipped with unlimited ammunition and a pretty decent gun, and you’d be surprised what power ups drop when you have a whole series of games to play through in order to reach the bank. Do your best: bank manager Ronnie is counting on you to make a deposit! 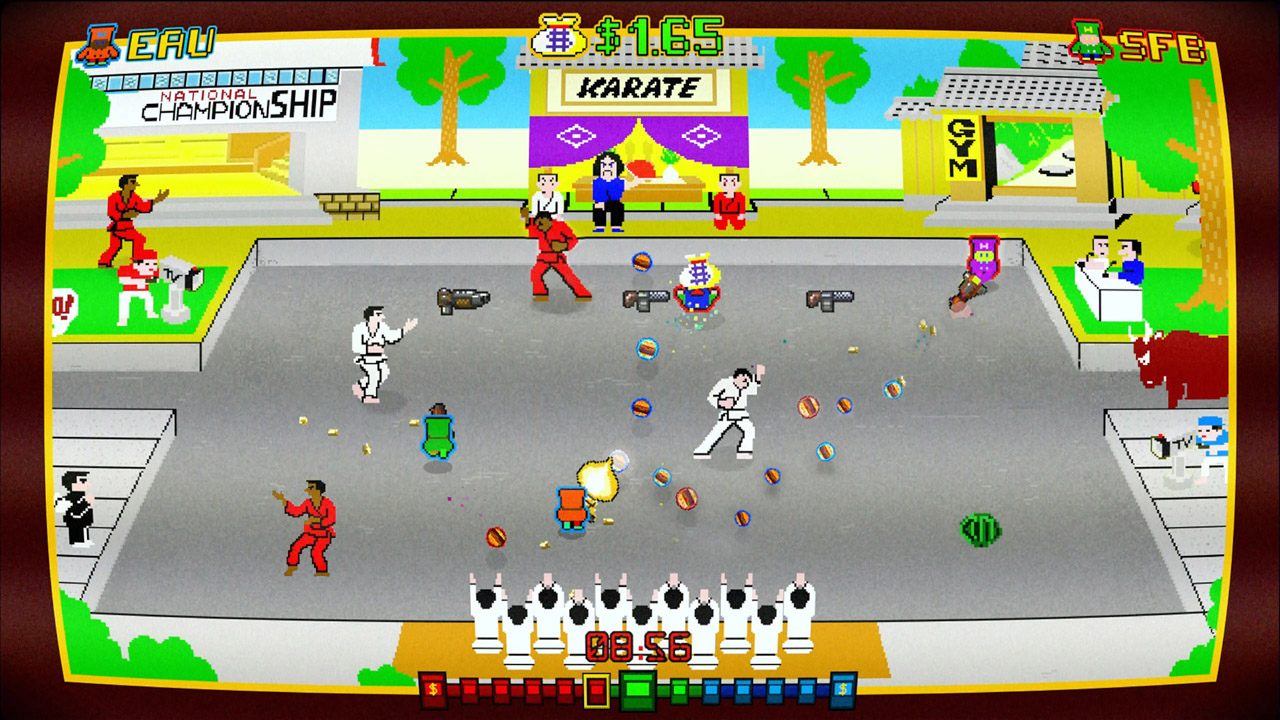 So, first and foremost, this is a truly bizarre and interesting experience. Each of the levels and arcade cabinets use oldschool game ideas, but everything is originally drawn and coded. Heavy Burger feels like the Wreck-It-Ralph of competitive games, and I mean that in a sincerely positive way. Those who watched Ralph before enjoyed it because it was a good movie, but fans who recognized all the video game characters in it had a stronger level of nostalgia attached with a new product (I don’t want to compare to Ready Player One because that was a massive train wreck). Likewise, there’s enough content in Heavy Burger to potentially engage and keep players who are totally unawares of the background happy, but it’s the folk who’ve either kept up with the Johnny Turbo releases OR just spent time wasting quarters three decades ago that’ll really dig the title and the concept. Each of the stages is lovingly crafted to help best capture the positives and negatives of every game that’s been featured.

For example, when you cross into the BurgerTime world, your journey is often impeded by burgers that form and drop from the ceiling or spring up from the floor. The world of Side Pocket (a pool game that hasn’t yet come to the Switch) has explosive balls all around that can be shot to achieve maximum carnage and hopefully make a getaway possible. The Bad Dudes area, strangely, is one of the weaker ones, as it’s a bit smaller in terms of navigation (there’s a giant fountain and statue in the middle) and it just becomes havoc as one team desperately tries to cross into the bank and end the game.  The world’s might only exist for a moment depending on the momentum of the incoming team, but they’re still something to marvel and enjoy.

So, how is the gameplay of this particular game? Heavy Burger is a little scattered in balance and control, but the overall effect is good. Navigating between the obstacles, gunfire and general coursework is entirely contingent on keeping an eye on yourself. Your sprite is rather bland in comparison to all the beautiful retro work going on around you, and that seems intentional in both keeping focus on the overall game and distracting you and other players. When you first spawn, it’s easy to spot your opponent and keep them in your sights as you blast away and try to get the money bag. It usually only takes one shot to “die” and need to respawn, and, if you’re not carrying the money at the time, that’s almost always a guaranteed breakaway for the other team. Still, the powerups can help shift the balance, between rapid fire shots and sprinting speed boosts. Keep an eye on where you’re travelling, however: the shooting is more of a multidirectional affair, and making sure you’re aware of which way you need to pop while running in the opposite direction is key for survival. 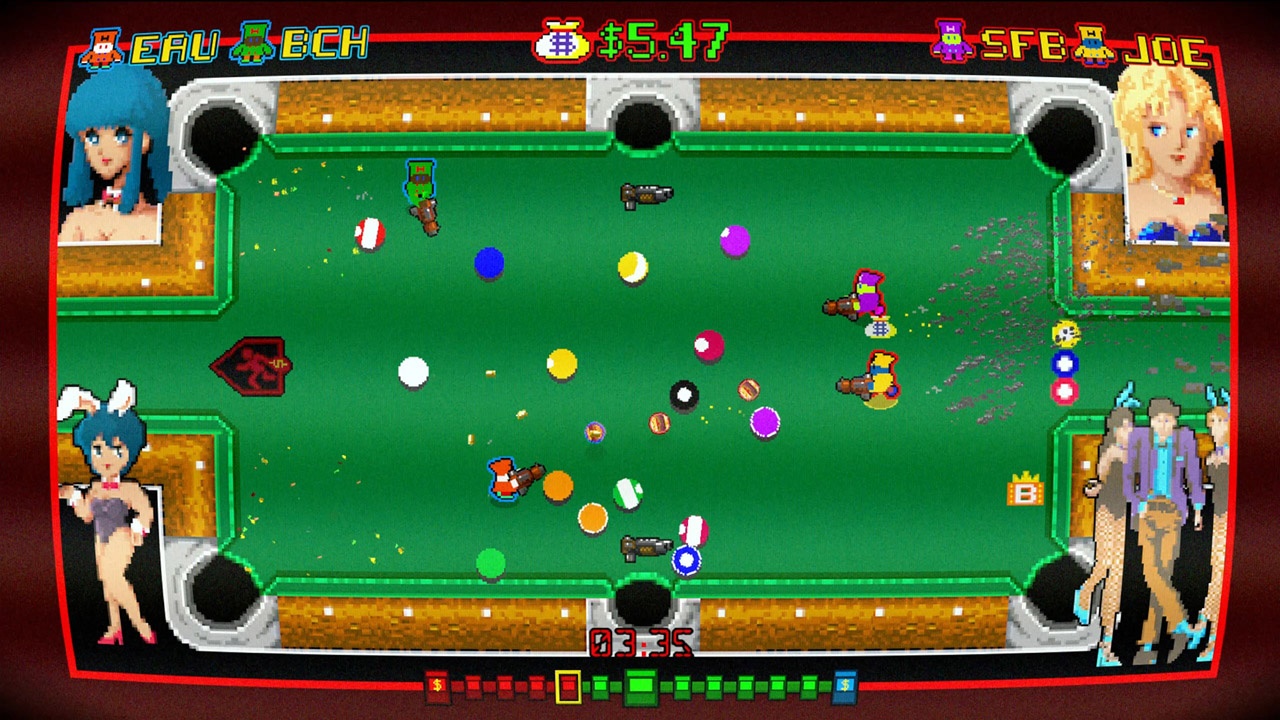 The overall effect of Heavy Burger is quite good, and it feels like something that could easily be inserted into the right catalog of gaming on many people’s devices. However, there’s just a bit of a rub therein. Firstly, as I said before, if you’re not really into the games of Data East from back in the day, there’s an automatic deduction for interest. Secondly, the replay value is about 90% contingent on who you play with. As a single player title, there’s a bit to do, don’t get me wrong. There are challenges to help you acclimate to the different arenas, adjustable difficulty to attempt things against strong AI, and a couple different modes to spice it up. But the biggest enjoyment is going to come from going against other people, because it does feel like a real nail-biting title. You can bring it all the way to your Bad Dudes level, but, if the other team is lucky, they can pull off a shot, steal the money bag and hightail it out of there down their own lane of arcade games. It’s got this wonderful push/pull effect that creates tension and stress, like a real competitive sport.

Here’s what I envision for a game like Heavy Burger. You buy it one weekend, and play the hell out of it for about three hours straight with some people. After that, you take a break, and this becomes a regular thing about once or twice a week to blow off steam. This could totally become a great tournament game for some in-house competition, and I’d love to see people making teams and actually getting a little serious about it. For most folk, however, the curiosity factor will be enough to make the plunge and try it out, and it’s niche enough that it’s not distracting or going to have its sales hurt by other titles. As a massive fan of what Johnny Turbo has been putting out, this is a real joy, and I hope to see other endeavors like this (and also see Side Pocket soon). If retro arcade inspired games are not your thing, this probably won’t sway your opinion, but watch some videos before you decide if Heavy Burger is in or out.

That isn’t a typo: this is a mashup of Heavy Barrel and Burger Time, plus a few more games, and it’s surprisingly awesome.