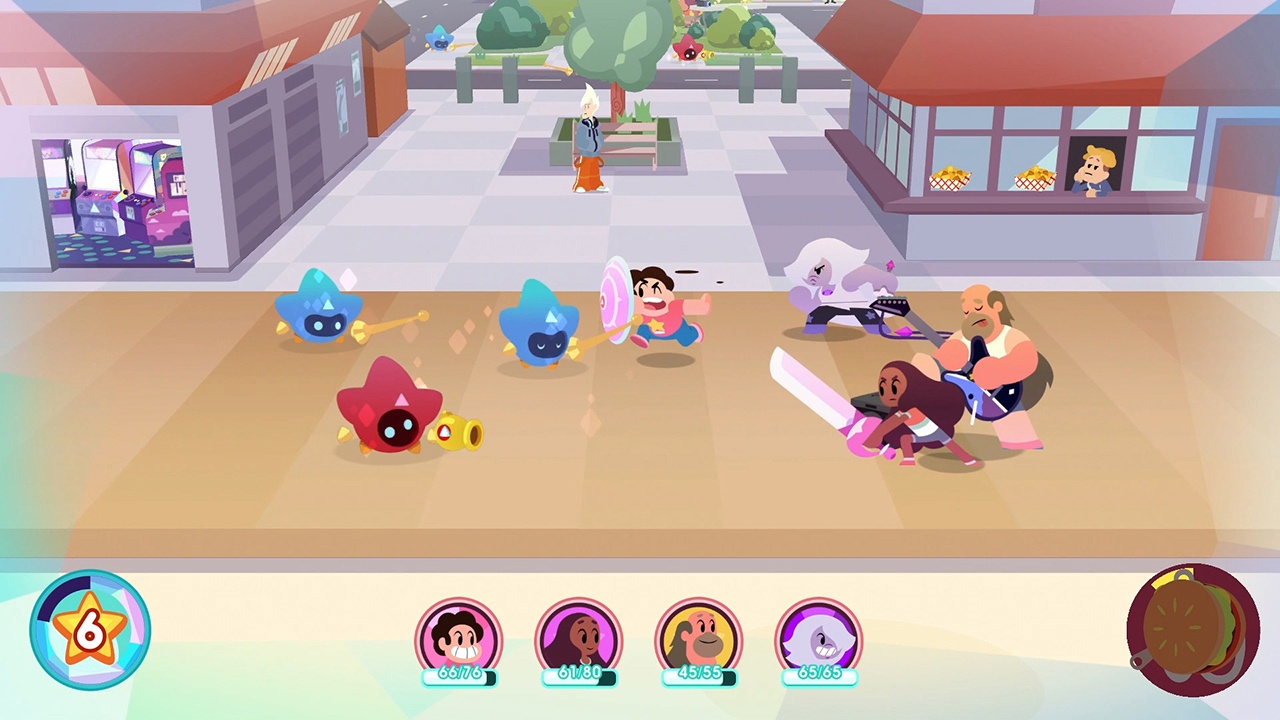 I don’t mind watching Cartoon Network on television. It’s on most mornings in our house before the school run. However, only some of their eclectic mixes of cartoons appeal to me, such as The Amazing World of Gumball, but I simply don’t get Teen Titans; although my kids love them, so I must be missing the point here. If there’s one thing I don’t like though, it’s the constant repeats, or re-runs, of previously shown episodes that replay over and over every few days. The same can be said for the video games that depict the shows from Cartoon Network. Some look appealing, others don’t. Some I get and others I don’t. Some work really well, while others play like I’m sitting through a re-run for the umpteenth time.

The latest of such games to hit a release comes in the form of Steven Universe: Save the Light as it shines a release upon the Nintendo Switch. The game plays essentially as a role-playing game, incorporating elements of character levelling, attribute building and turn-based, as well as real-time, combat. Now, I have to admit that I’d never heard of Steven Universe before, despite the fact that the Cartoon Network channel is a regular fixture in our house; it’s obviously not a morning show, but then again, I could be wrong. In order to familiarise myself with the whole premise of its subject matter, I had to watch via some episodes on YouTube.

Although it can be played as a standalone, this title is in fact a direct sequel to the mobile game Steven Universe: Attack the Light. However, it isn’t a necessity to have played this prior title, as the story which unfolds in this release is an easy one to get to grips with. For those, like me, who are unsure of the general premise of this game or its spin-off series, Steven Universe follows the tale of a young boy whose mother was once one of the four crystal gems; a band of heroes that protects the universe from evil forces. Reprising her role, Steven teams up with the gems and through the power of friendship, proceed about carrying on the work that his mother previously partook in. In terms of its production, the series tries to convey a series of messages that may be deemed important in life; I would probably say that if you’re familiar with Adventure Time, then this series follows along the same lines in its ethical approach. 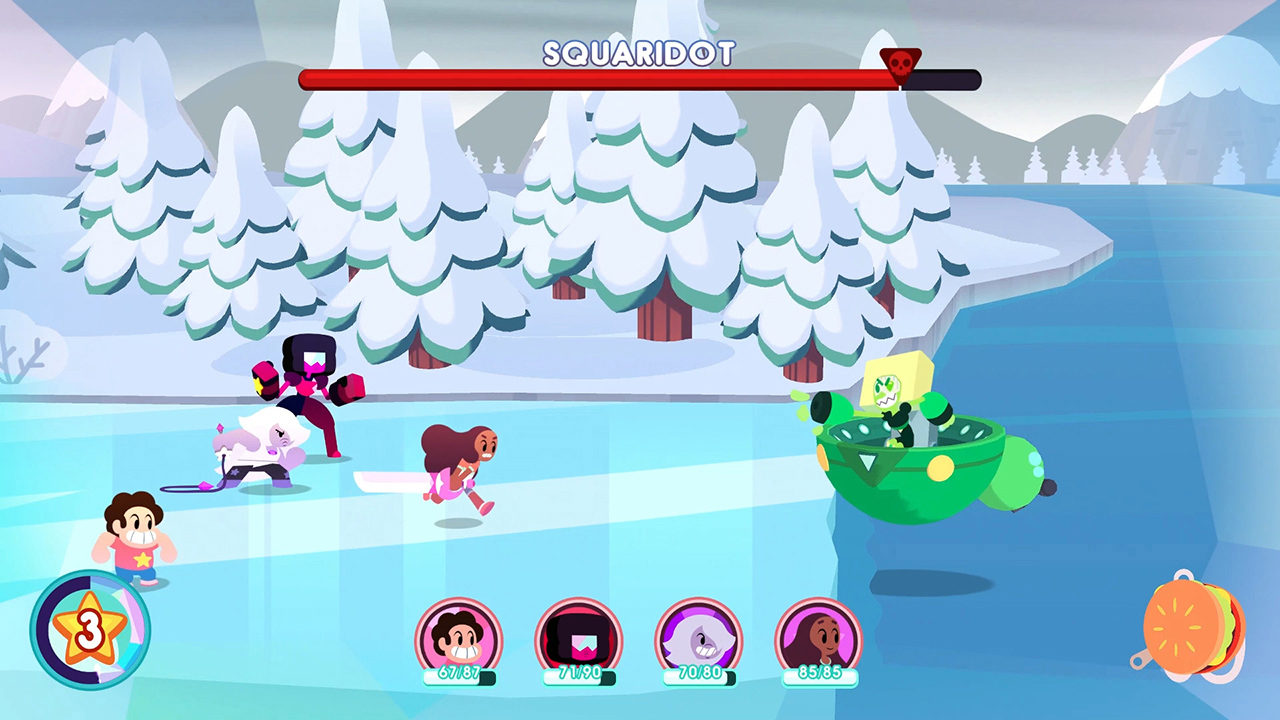 As for the game itself, the story revolves around a prism who, in the previous title, is stopped from destroying the world through its evil deeds. After embracing the concept of kindness and even shifting its form to mimic that of Steven’s, peace and harmony is restored. However, in this instalment, a strange being who claims to be the prism’s owner turns up in Steven’s neighbourhood and forces the prism to return to its evil ways. Now, it’s up to Steven and the gems to combat this new threat to the world and prevent the strange being and his prism from conducting evil tasks around the world.

The game plays in a very similar vein to the Paper Mario series of titles. You navigate through a series of 3D environments, but the camera angle and character models forces a very 2D aesthetic; one that simply matches the presentation of style of the television series on which it is based. In fact, the whole world has been rendered in spectacular fashion that easily recreates the world of Steven Universe; even incorporating well-known locations that fans of the hit TV show will instantly recognise, such as the Strawberry Battlefield or the Sky Arena. It creates a nice series of environments, particularly for those in the know, and one that brings a nice touch of immersion as you explore the familiar neighbourhoods around Beach City. 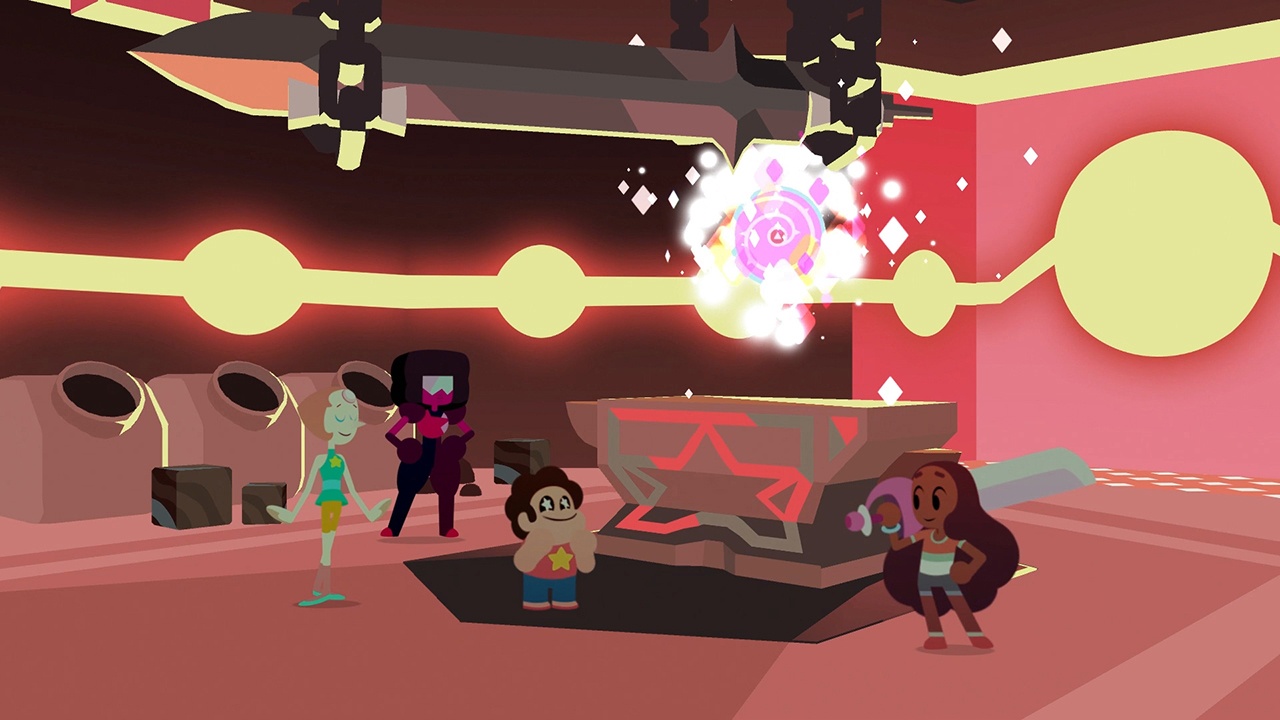 As in any good-old RPG fashion, the story progresses through a series of quests and character interactions; some of which comprise your party of heroes. As well as the environments, the game is also host to abundance of immediately recognisable characters; at least for fans of the show. Each of them are voiced by the original cast with familiar quotes that immerses you deeper into the settings. Much like the TV series, the concept of friendship and kindness becomes a major part of the game; its elements incorporating into the mechanics of the game through friendship bars, character partnerships and battle abilities. Although slow to start with, building alliances with your party members promotes enhanced combat abilities, making the fights against evil an interesting premise.

The combat within the game follows two varied styles; turn-based and real-time. Despite their differences, both are extremely accessible to play and incorporate a few elements to help keep them interesting. By choosing actions from a radial menu, you can utilise a series of moves. However, by pressing buttons in a timed sequence correctly, much like a QTE mechanic, then you can enhance your attacks or abilities. As well as this, relationships grow stronger too amongst party members, using the power of friendship to fill a meter that unleashes special, or fusion, attacks that can have devastating effects on the enemy. There are so many elements here, both from concepts of the TV show and within the mechanics of the game, that there’s too many to mention here. However, a lot of the charm of this game is finding out how things work, how characters interact with each other and discovering elements that are lifted straight from the series on which the game is based.

Overall, Steven Universe: Save the Light is a fun game that perfectly captures and recreates the television show from Cartoon Network. The whole level of production, from graphical representation, locations and characterisations have been lovingly crafted to produce an experience that is fun, beautiful to look at and most importantly, enjoyable to play. All of its elements combined, from role-playing to combat hold just enough variety to keep you engaged and the story itself entertains throughout its entirety. It may not match the same level of play-time as many AAA titles, but there’s more than enough content here to represent good value for money. Previous releases of this title on other platforms have been marred with technical issues that have broken the game. However, I’m pleased to report that this Switch version contains no such errors, making it the best version of the game to date. Whether you’re a fan of the series or not, or even if you’ve never heard of the main character, as a video game, this is a stellar example of licensing done right and in those terms, makes this a game that comes very highly recommended.

Steven Universe: Save the Light Review

Forget the Light. What we have here, is a licensed game that actually saves the day.