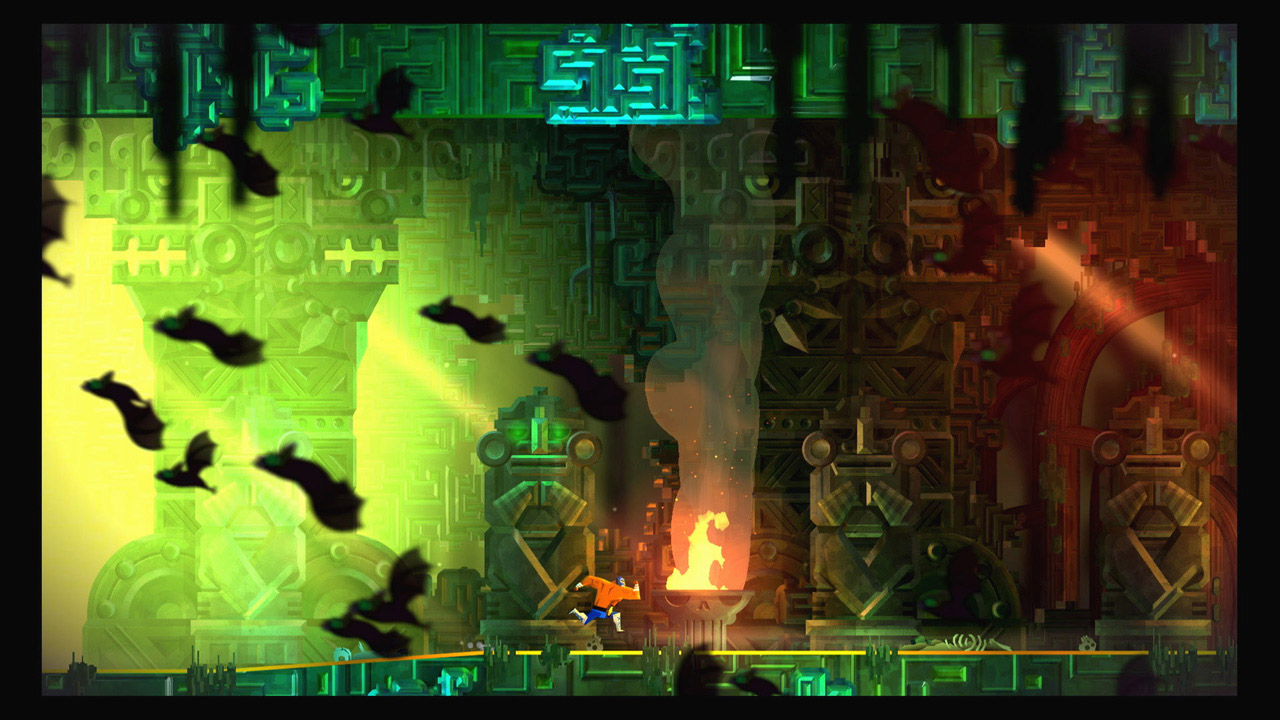 There are few things in this world that we can all rally behind. The ideas of world peace are noble, sure, but a good number of people would rather see the world at war, if only for the chance to say that their own brand or nation could come out on top. Yet there are issues that can boil down to a binary yes or no, and everyone will be on one side of that line. I’m talking about, naturally, the perfect guacamole. It’s impossible to achieve that amazing balance of spice, sour and sweetness, but, if it existed, I would flock there daily for a dose. And that might make Salvador, the villain of Guacamelee 2, the most sympathetic to me in many, many games. Oh, and his quest creates a banging game, so that helps too.

Guacamelee 2 is a direct sequel to the original Guacamelee, putting you again in the shoes of Juan, who is years gone by from his final showdown with Calaca and saving the world, getting the girl, etc. Well, as it turns out, there are worlds upon worlds where this exact scenario never played out successfully: Juan, our Juan, is the only Juan who defeated Calaca and survived. Now, across these worlds (referred to as the Mexiverse), a single luchador, named Salvador, is making waves as he seeks some long-lost-relics to find a hidden place where time itself converges. In this hidden land is the Sacred Guacamole, which will surely give Salvador ultimate power and also cure this nasty cough he has. Problem is, Salvador finding one of the relics has caused a massive rift to erupt across the different worlds, and getting them all together might sort of destroy the Mexiverse as we know it. Juan, the only surviving Juan, must once again don the mask, journey through the land of the dead, and improve his amazing powers in order to defeat Salvador and save the Mexiverse (and the Sacred Guacamole) as we know it. It’s simply perfect in setup, and it only gets better from there.

Guacamelee is a delightful game, but I have an honest bone to pick with it: it takes a while to really get going. For a game that’s comparatively short, it felt like it took several stages and encounters before you got your sea legs and understood the dynamic of this masked wrestling metrovania. Guacamelee 2 does away with this entirely by having a short introduction that is, ostensibly, the ending of the first game. You quickly understand what Juan is capable of, how to move, and what you should do to survive. Then you get to start rebuilding from the real beginning, far in the future, and dive into things at a faster clip. This’ll be the last time that I compare the two games, because Guacamelee 2 is a totally different title, and, if I’m being fair, I haven’t played Guacamelee in a long time, so my memory is shoddy at best. 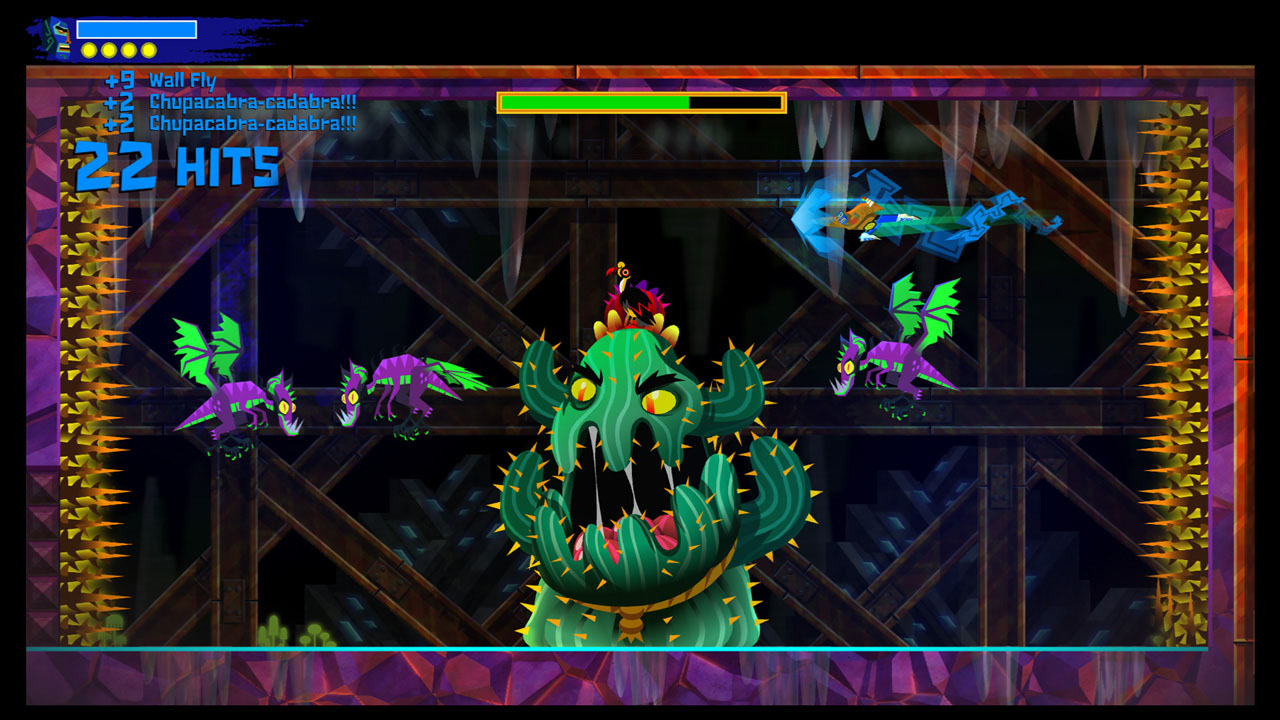 With Guacamelee 2, the objective is to seek out the three artifacts and defeat skeletons, beasties and bosses along the way through your incredible wrestling skills. You quickly get the hang of doing uppercuts, straight punches, suplexes that toss enemies far and dodging incoming hits and projectiles. Getting the hang of your dodge is absolutely critical to survival and getting anywhere in this game: right out the gate, you get enemies with projectiles, enemies who are out of reach and enemies who cannot be stunned and will wail on you without acknowledging the damage you take. Plus you need to get through certain barriers, time your jumps with trapped platforms, and give yourself some time to breathe whenever possible. Along the way, you’ll also unlock additional moves through statues placed throughout the game, like the ability to soar like an eagle, wall jump, and the trademark Rooster Uppercut that does damage and also acts as a last-minute extra jump.

There’s also the training aspect, something that I really enjoyed about this game. You’ll encounter some NPCS that are new to this game (and some that are holdovers from the previous) who become your new permanent trainers that exist in a separate, always-on menu. When you meet the requirements (usually a combination of enough gold and a sort of feat like a hit combo), you’ll be able to unlock extra passive traits to make your journey stronger and better. This plays in so well with the tone of the game as a real adventure and exploration situation. Instead of needing to always double back to where the dojo is or finding an inn to rest at and edit your character sheet, you can, on the fly, decide if you want more health or stamina, do extra damage, get extra gold from high hit combos or even improve your dodge recovery rate. It acts as a good incentive to get some achievements going (besides the hilarious titles of the achievements) and also to smash every barrel, punch every skeleton, get every piñata and have as much gold on hand as possible. It’s a win in every sense of the word, and the number of trainers only increases as you move on. 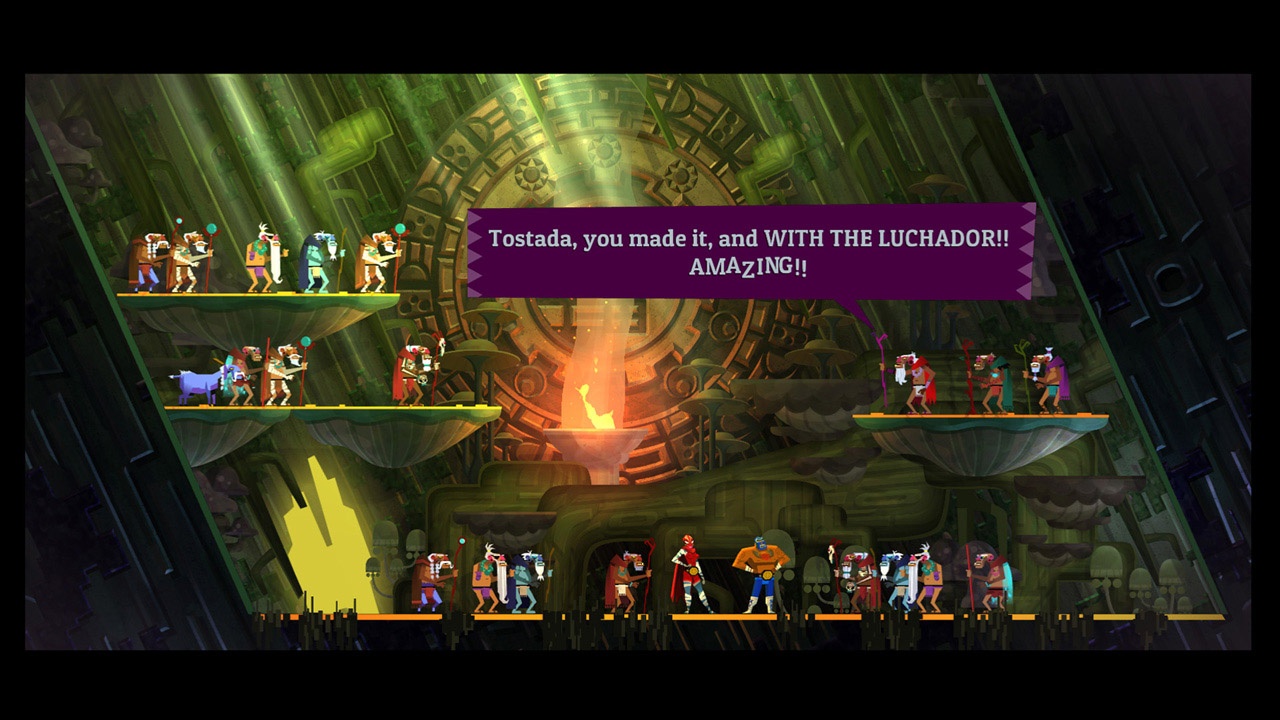 Easily the strongest part of the game is Guacamelee 2’s amazing presentation and soundscape. This colorful, dynamic and irrepressible game has the right idea and mentality from the word go. There are no fewer than four nods to other indie titles right from the very beginning, and the game never seems to lose the steam or speed that it delivers in those initial moments where you re-defeat Calaca. There is always an explosion of hues amongst the skeletons, outfitted in bright ponchos and amazing head dresses, and the levels themselves, even throughout the Darkest Timeline, are still painted with a vivid brush. The music stays true to the Mexican inspired roots, with some driving guitar, horns and a surprisingly wide array of electronic and almost chip tuned tracks throughout. When you do the legwork and find three chests and unlock an extra heart or stamina circle, the screen explodes in a celebratory rifff, complete with chickens, and, by the way, the chicken transformation is back. Only this time, you can fight as the chicken. I’m not saying that’s worth the price of admission, but it’s goddamn nice.

Additionally, you see a lot of great opportunities for players to decide the how and why they want to experience Guacamelee 2. This title is longer than the original, to be sure, but the full amount of time you plan to put into this game comes down to your approach. If you’re situated to only tackle the story and to put down Salvador and his weird henchmen as fast as possible (that giant cactus is so damn weird), then you can bang this out across a couple of days, maybe just one long day if you’re super dedicated. On the other hand, there’s so much to unlock and so many things to see, secrets to find, extras to encounter, and that could almost double the amount of time that you put into it. And you don’t have to do it alone: from the very beginning, you can bring up to three other luchadors into the mix, and I sincerely, honestly recommend that you do. This game is a blast to play solo, no doubt about that, but it’s so much chaos and fun with other masked wrestlers around. You get these crazy combos going as you smash enemies back and forth from each other, like a funky game of volleyball, and you learn to work with your fellow fighters to really make this a unique and fun experience. I’m serious, it’s ridiculous in the right setting.

There isn’t a lot of moral to the story when it comes to the success of Guacamelee 2 and what we should take away from it. As Juicebox took an already great product and gave it a successful and honest sequel, there isn’t any room for serious criticism. I see that critics will often talk about stagnation and lack of innovation within games, and I don’t see that here. I see a whole new game full of brand new content, quips and level designs that succeeds by recognizing the good parts of their origin and not screwing with them just to say “it’s different.” Instead, this feels like a natural extension to the first title, like there’s cohesion in the saga and you’re immediately on board without needing to think about it. Trouble in the Mexiverse, evil luchador is going to steal Sacred Guacamole, I’m the only hope but I can also bring three friends, got it, where’s the skeletons to punch? You dive in, head first, off a turnbuckle, and it’s glorious in presentation and execution. If you liked the first game, it’s a no brainer, get this one. If you’ve never played the original, trust me, you can swim from here and make it just fine (though definitely pack up the original when you get a chance). If you didn’t like the first one for anything more than a very cosmetic or superficial reason, there’s not enough deviation here to make a case to buy it. You got great gameplay, tons of old men moonlighting as goats, and some fantastic jokes all around. Guacamelee 2 is a KO, straight up.

The masked wrestling metrovania returns with more of the same from the original, which is music to this hombre’s ears.