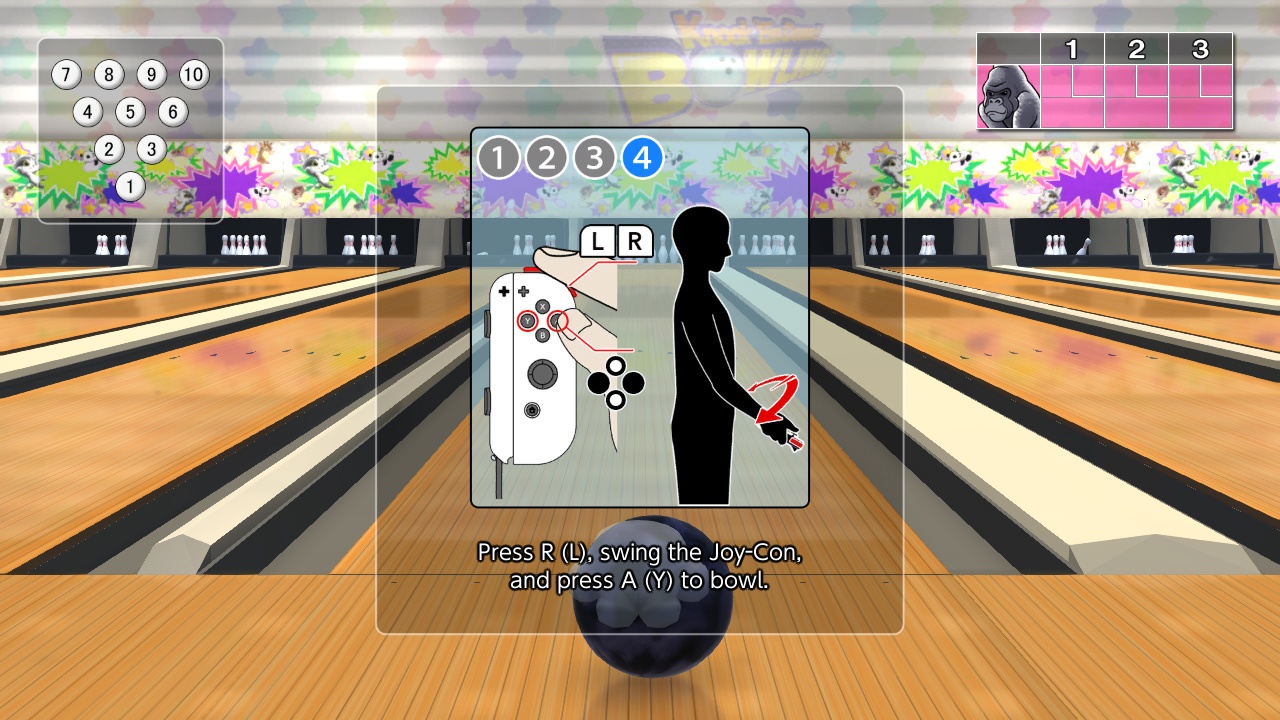 Knock ‘Em Down! Bowling is exactly what you think it is, so I won’t mess you around with anything else. Welcome to bowling. It’s bowling. Do you like bowling? Because, real talk, I freaking love bowling, so this game was already pretty high on my list when it came out. It’s a familial thing: my parents were bowlers, my wife loves to bowl, my daughters both try to bowl. But the catch comes from the fact that I was born and raised in New England, and that makes all the difference if you know your bowling locations. See, a good majority of the United States does traditional ten pin bowling, which means you’ve got the massive ball with three holes and the pins that get used as murder weapons in clue. But in Pilgrim country, we practice a little style called candlepin. Candlepin, for those unaware, are narrow pins, like candles, and you throw a ball that looks like a shot put, meaning you have to completely change your grip and style, especially since each ball weighs the same. Some people hate it, some people love it, but, goddammit OHRUSSIA, you put it in, and thank you.

As a matter of fact, you get a ridiculous number of bowling variants in this sports game from D3 Publishing. I mean, you should, for twenty bucks, but it’s almost surprising how much is kicking around here. It’s four players, one JoyCon needed for control, and you can do button motions if your need for bowling is so great you do it on a crowded subway and have enough common decency to not do motion controls. All the character avatars are animals, because why not, and you have some cute choices to use as a representative only in picture, not on the playing field. There are three standard modes: ten pin, candlepin, and duck pin, the weird, runty brother of the former two. There’s also party mode bowling and variety bowling, which we’ll get into in a moment, but it really needs to be recognized that there are three “normal” bowling options. You can turn bumpers on and off, and you can set multiple strings from the beginning, so you can work on either winning a tournament or just showing off your skill in a singular setting. In either case, if you’re down for traditional bowling, there’s plenty to work with here, provided you can get comfy with the bowling mechanics. 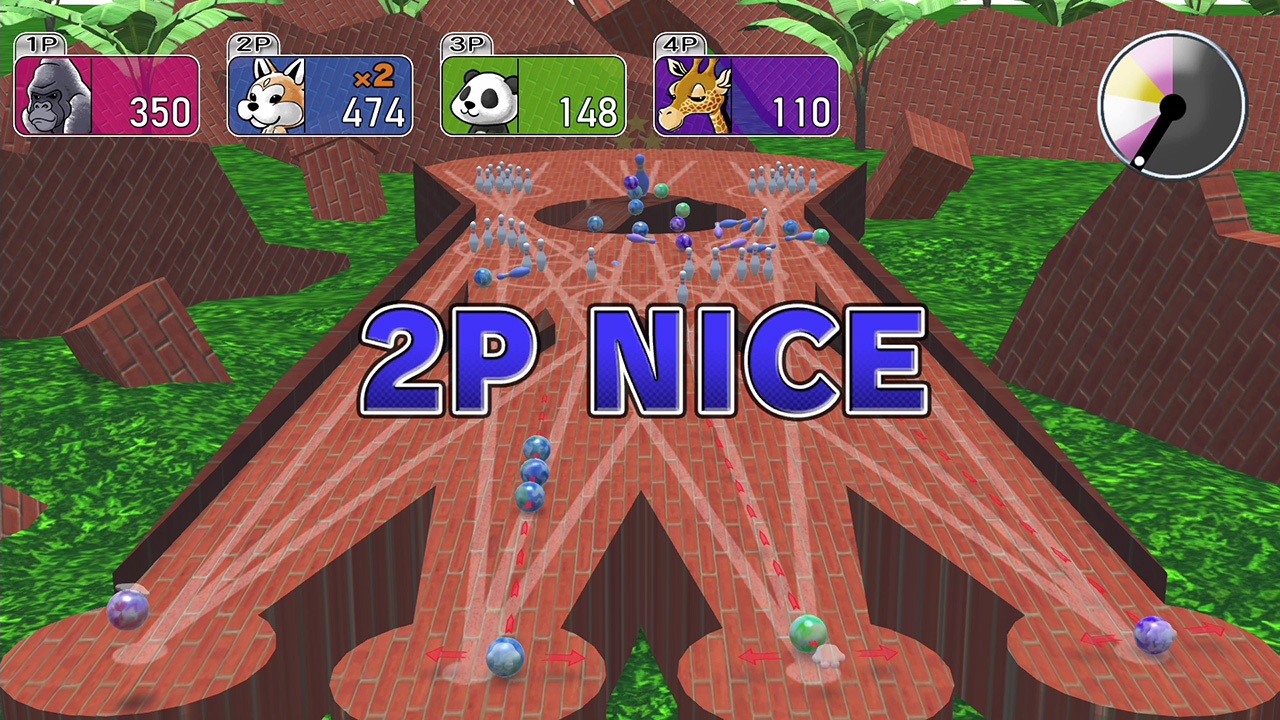 OHRUSSIA obviously knew about the traditional setup that Wii Sports had introduced years ago: hold a button back, swing, release at the right timing. It’s so on the nose it’s practically a septum piercing. But OHRUSSIA needed to change it up a bit, and I think it actually works out better. The JoyCon has excellent motion and gyroscopic tracking, and I have to believe the addition of an extra button press is to help balance things out. So now, you hold down a shoulder button to “activate” the motion, and then you don’t release the ball until you push the A button in mid swing. It feels so weird at first, but then it gradually makes more and more sense, and becomes more natural. You don’t release a button, which cuts down on the chance of you overcompensating and releasing the whole damn controller (which was a seriously big problem back in the heyday of the Wii). You also are more keenly aware of your wrist angles, which translates into better spin and slide control for the ball throwing. What I’m saying here is OHRUSSIA has made a better mousetrap to capture a more clever mouse. For players who actually want to do bowling curves and dramatic throws, this is a much better system. Well played, OHRUSSIA.

It’s a pity, then, that the button controls are almost the exact opposite. You need to hold the shoulder button back, adjust the swing with the joystick, and then do a weird “push and release” that involves the A button and the shoulder button in different directions. I think that OHRUSSIA wanted to try and mimic the movement style onto a stationary system to both make it more unique and also to keep people from doing button controls just for easy wins, but the end result is something both frustrating and deeply unsatisfying. If you’re someone who actively doesn’t like motion controls or is physically unable to do them, this game might be a hard pass on that merit alone. Seriously, I disliked the button controls so much that I made sure there was an empty seat on either side of me and then I just detached a single JoyCon to do small, pathetic throwing gestures in lieu of the buttons.

If that’s all there was and it was just a good bowling title for up to four players, that’d be well and dandy, but then we get into the Party Mode and everything just goes completely berserk. The U-Turn bowling is some fanciful bowling manoeuvring, asking you to bust out the compass and protractor to figure out the angle, speed and velocity needed to launch a ball up a ramp, have the energy curve it around, and then to hit pins on the other side of the wall. This is one of the few party games where it can be a lot of fun solo, especially if you’re working on your curve balls. Battle Royale bowling, on the other hand, asks you to have a furious, mostly nonstop ball chucking contest against the other players, so this level of havoc is crazy fun for adults and children alike. When someone manages to have the perfect hit to knock over the massive bonus pin that occasionally appears, it’s an instant eruption of emotion on all sides. The last of the arcade modes is Slide Bowling, where the pins are on a constantly moving platform. This one is a big test of patience and timing, so I recommend doing it on team mode so you can line it up perfectly and do a one-two hit with a friend. Again, the party bowlings are fun, but far from the main incentive to the game. 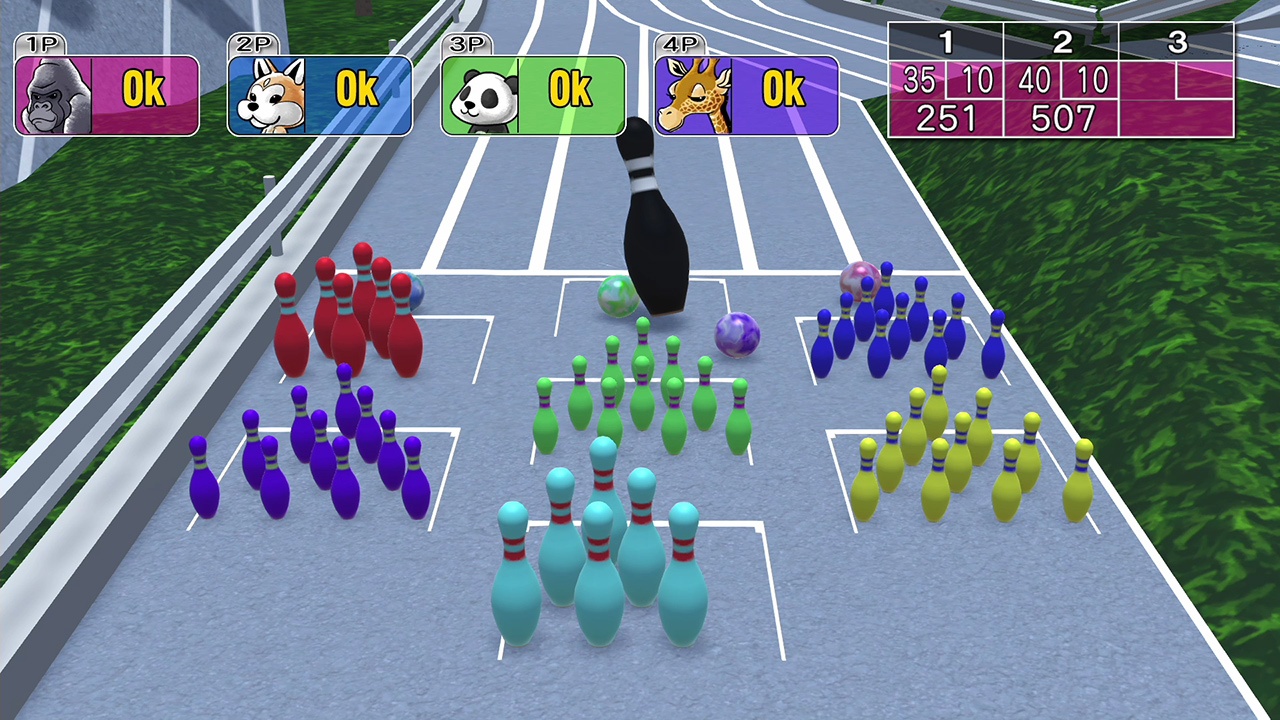 Lastly, Knock ‘Em Down! Bowling has a funny little extra called Variety Bowling, and I highly recommend everyone give this a try at least once. Poised as a normal ten pin game, variety bowling has an adjustable roulette wheel to determine how your ball will change each round. This involves your ball getting bigger or smaller, turning invisible, or outright becoming another type of ball entirely. This is one of those great risk/reward platforms where you’re mostly hoping that it’s going to damage the other player more than getting lucky. It’s perfect poetry to see your cocky friend get the soccer ball, line up the perfect strike, and then just watch it bounce pathetically off the first pin and knock over nothing else. You might get lucky and get the coveted curling ball, but, more than likely, whatever you end up with will make things significantly more difficult. But it’s done so in such a fun and lighthearted way, in the lanes of a bowling alley in a match of a panda versus a rabbit, that you don’t mind.

This is, straight up, a fun bowling game. This is a fun, motion oriented, perfect-with-a-Joycon bowling game, and the inclusion of candlepin makes my heart warm and fuzzy. It’s an absolute nightmare with button controls, and, if that’s your only way to play, I’m so sorry that you can’t enjoy this game. However, it looks like D3 Publishing picked a winner in this casual sports title, and I really hope that would-be enthusiasts and bowling fans the world over can grab this game and have the best damn digital bowling experience to date.

It looks like D3 Publishing picked a winner in this casual sports title, and I really hope that would-be enthusiasts and bowling fans the world over can grab this game and have the best damn digital bowling experience to date.