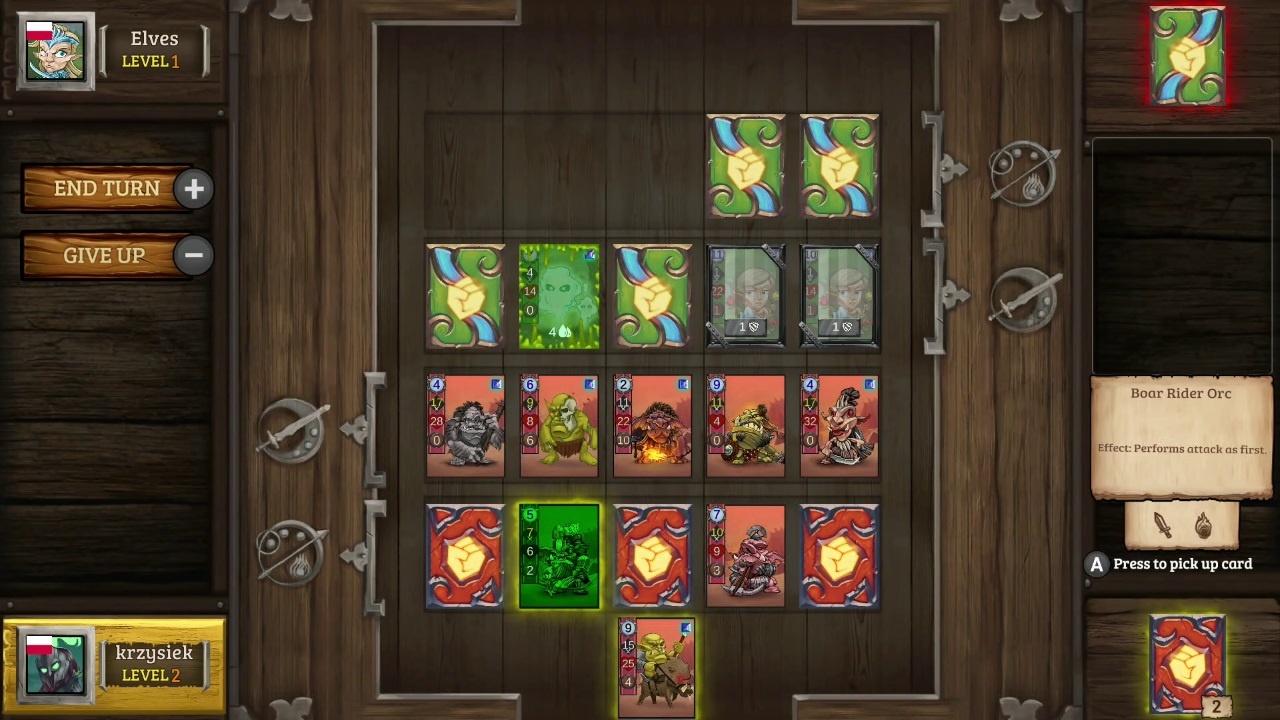 There seems to be a distinct relationship between buses and video gaming. Sounds strange, I know, but in reality you wait an eternity for a specific genre or bus to arrive and all of a sudden a whole load of them appear at once. Being a fan of card-based battle games, I’ve sat patiently waiting for such a game to find a release on the Nintendo Switch, then lo and behold, I’m treated to several titles that all release at similar times and contain similar mechanics. This is certainly the case for Magic Nations, as this is a game that comes hot on the heels of several other card games that have also dealt their hands on Nintendo’s hybrid machine.

Developed and published by Primebit Games S.A., this TCG-styled battler is a game that will be instantly recognisable if your familiar with other games within its genre. From a deck of cards, you create a hand and on the battleground of a playing mat, you take turns with an opponent in battling each others cards with a series of styles and attacks. In terms of gaming mechanics, there isn’t anything really new, or different here from what has been done before, although it does contain some interesting artworks and card styles that are worth investigating. It’s also worth noting that this title has seen a previous on the Steam platform as a free-to-play game, yet on the Switch it demands a payment; although, in fairness, it is a pocket-money price.

The general premise of the game revolves a world of orcs, elves and other races that are instantly recognisable within the mythical world of fairies, lords and rings. Each of the cards, or decks are built around these various races, with individual cards containing a number of factors that determine their level of skill and positioning on the play-board. A set of numerical values show the cards rating, health, attack and defence values; each of which plays a pivotal role in the offensive and defensive capabilities of each card. As well as these values, each card also contains a specific value that determines its style; such as melee or ranged capabilities and also others which possess special abilities or magical powers. As with all TCG-styled games, it takes a while to learn the mechanics of each individual card types and the best way to utilise their powers in turning the tide of any battle. 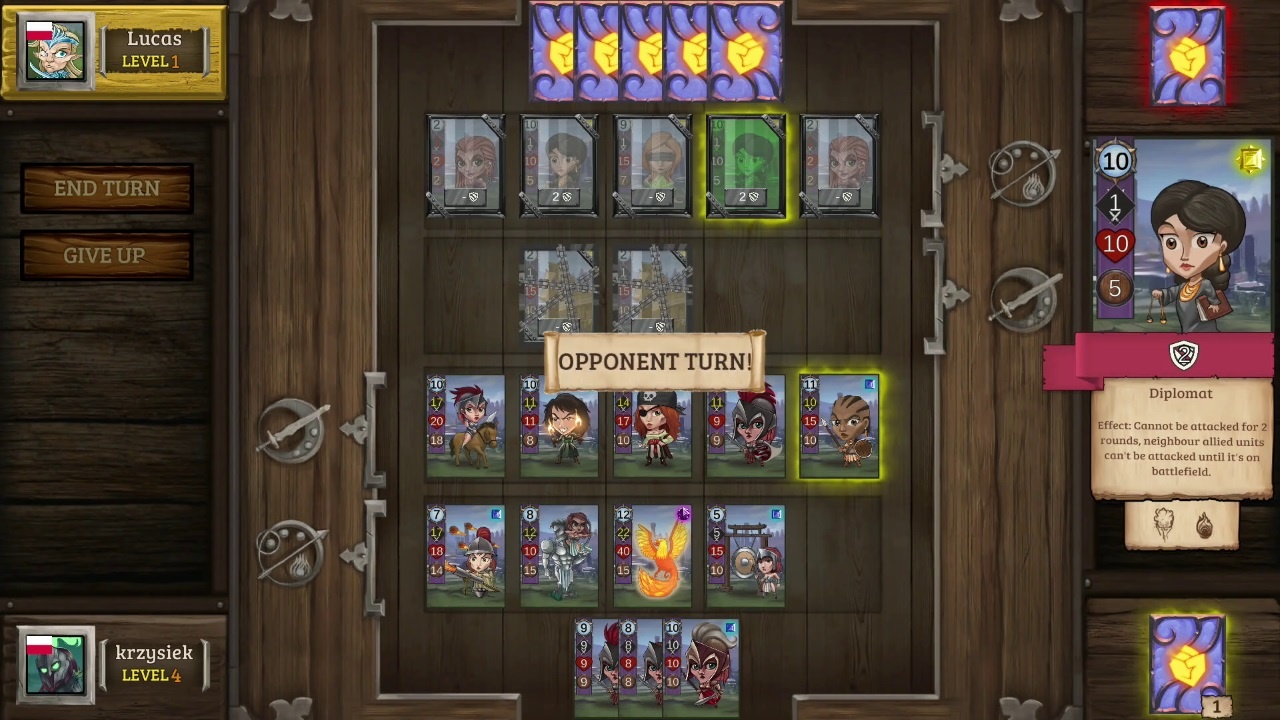 As with the majority of similar-styled games, you lay out your cards in a grid-like fashion on the playing area. What makes this game, somewhat unique, is the way in which these grids are set out; with a triple layer that houses close, mid and long-ranged cards. Another factor which is different, is the ability to choose what card to attack. Activate a melee card and you can pick from one of the three cards that may be facing opposite you; use a long-ranged attack though and you can pick from any enemy card. It’s here where the value of the card’s numerical values come into play. Your attack value determines the amount of damage you can dish out. However, should the opposing card contain a defence that is higher than your attack, then the damage they receive will be nullified. Whatever the defence value of a targeted, it’s figure will be removed from your damage total.

With each unit of damage given though, the defence value decreases until the card is left with no defensive value; making it vulnerable to any attack. Similarly, when a card’s health is reduced to zero, then it is removed from the playing area and the player with the last card standing wins. It sounds a simple premise, albeit one with a tactical depth that requires thought and planning. If it sounds a bit confusing or technical, then in some aspects of the gameplay, it is; especially when it comes to the values of the card’s rating. Although the game does offer you a tutorial on the mechanics of its play-style, its presentational values can leave you a bit bewildered or confused as to how the game works. For instance, one element of the game concerns the order in which each round starts; with the highest value card going first. Despite the tutorial offering me some guidance on this, it’s still a part of the game that I haven’t gotten to grips with yet; often leaving me exposed to a series of continued attacks without reply and for the majority of times, destroying multiple cards that I rarely recover from. 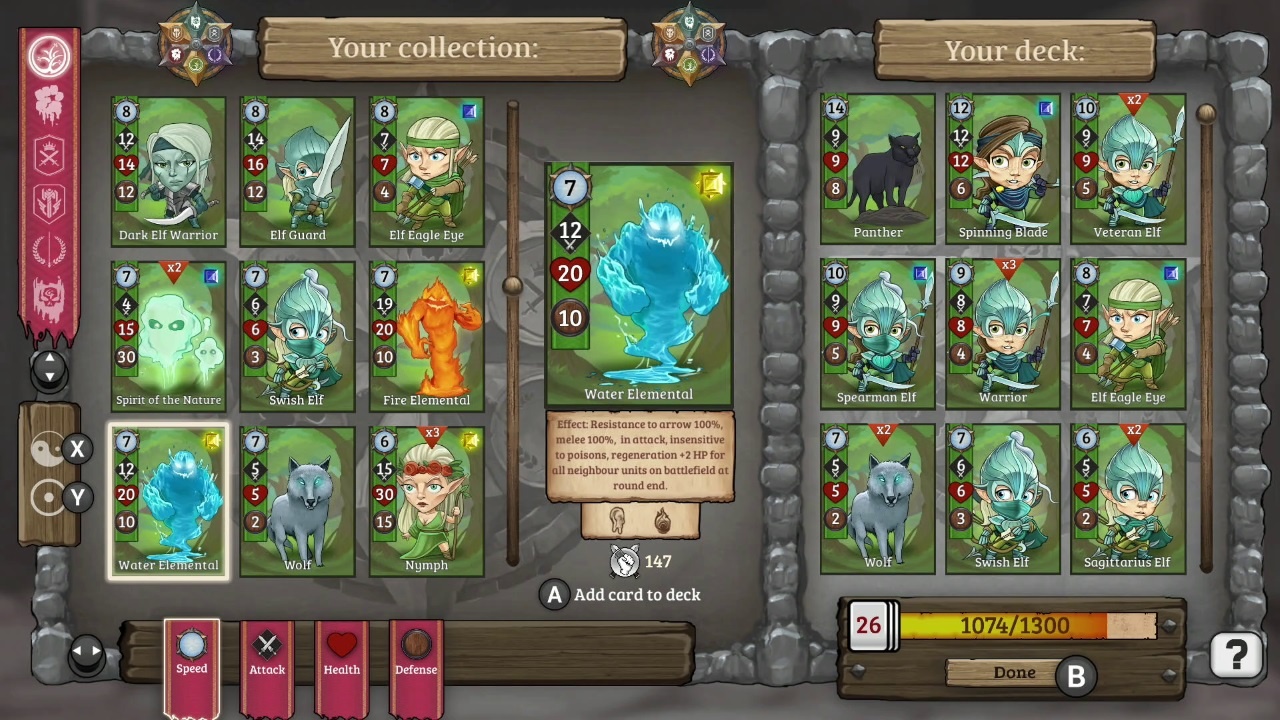 There are some interesting aspects to the gameplay and also a lot to learn here, but I’m no stranger to TCG or card-battling games; yet this is a title that simply has me stumped in how I should approach each battle. The complexity of its nature and lack of any meaningful instruction soon makes this a game that lacks any real excitement and when compared to other, similar titles that have seen a release recently, doesn’t really stand up to the same level of playability. I’ve also noticed a rather worrying mechanic in a series of unbalanced playstyles within the game too; meaning that if your deck doesn’t match up to your opponent’s, then there isn’t really much chance of you gaining a victory. In terms of these elements of the game, it’s obviously something that will become better in time, but in all honestly, I do feel that it’s going to be a hard slog getting there.

As with other similar games, gaining experience levels and achieving victories does reward you with extra cards and boosters. This can be achieved by playing through the game’s rather extensive solo campaign or by taking the fight online and battling against other players; although it’s largely here where you’ll find the nature of its unbalanced play-style. Whatever mode you play, you’re sure to come up against stiff opposition; even the AI you encounter in the campaign is pretty ruthless. With all of these elements combined, this is a game that isn’t easily accessible and requires a lot of patience and perseverance if you want to get the most out of it.

Overall though, Magic Nations isn’t a bad little game; it’s just a difficult one to work out, at least when you initially start playing it. With time and patience, I’m sure everything will come together; although I do feel that its allure will wear off before you figure out what the hell is going on. For its pricing though, you do get a lot of content and hours worth of entertainment; but when you consider there are much better options available on Nintendo’s eStore which are either free or offer better value for money, then you may have to think long and hard before you make the purchase. In my honest opinion, this is a title that is better suited to a hardcore TCG gamer and not something you should try if it’s your first foray into the world of card battlers.

A card-battler that’s interesting in concept and design, yet its confusing mechanics of gameplay can leave you feeling decked.