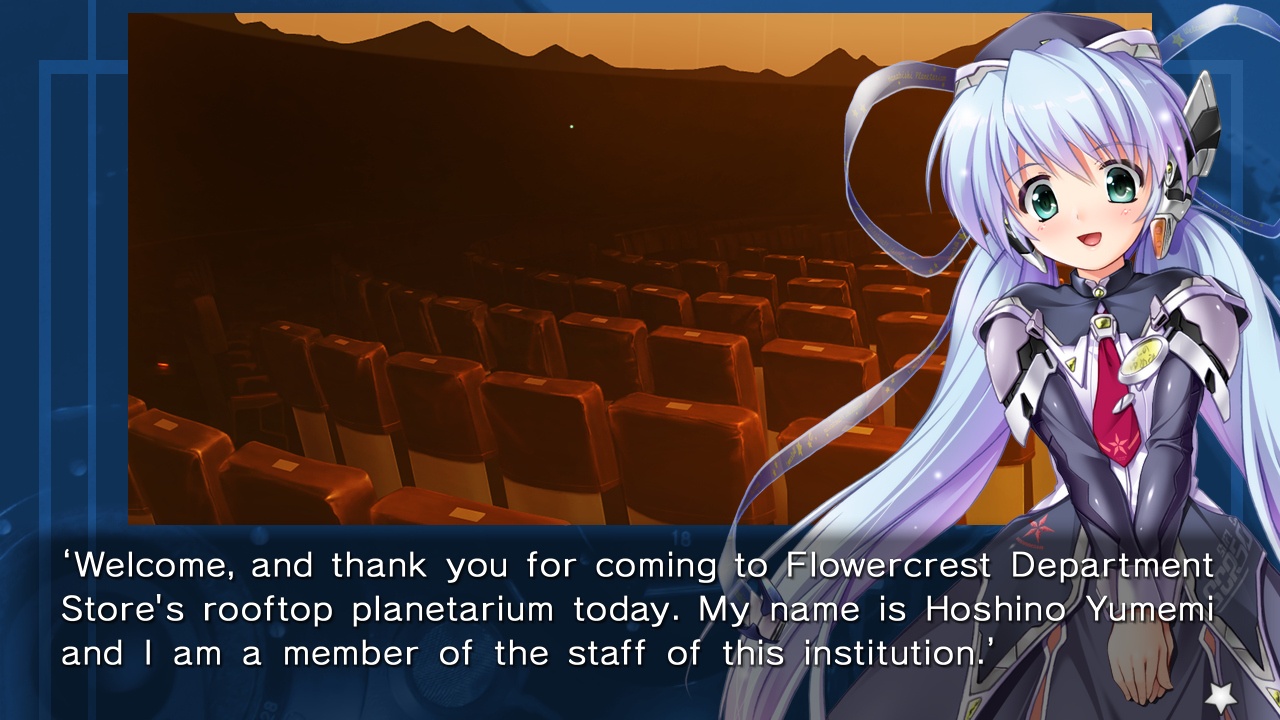 Visual novels are such a trip when you’re not ready for them. Even though you implicitly understand that you’ll be doing a lot of reading, and that there will be some kind of emotion to strike at you when you’re done, you never quite know what to expect unless you research beforehand. Planetarian, a kinetic visual novel from Key (and published by Prototype), was one that I had heard of before but never looked into whatsoever. Seeing it getting a Switch release (and being a fan of the genre in general), I decided to take a leap and see where I landed. The result, as it turns out, was a quaint little emotional breakdown. Planetarian is sad, but not in the way I think anyone could anticipate. It’s sad because it strikes you in the core of your soul, not your heart.

The backdrop of Planetarian is a dark, post-apocalyptic world where humanity has failed to find more resources beyond the stars and is now scrapping to survive against automated war machines and other humans who have borderline gone feral. You play a nameless dude who is simply called a “junker,” which is a fun way of saying you’re both homeless and constantly being shot at by robots and you just want to not die.  Anyways, you decide to pick through a decimated department store because it might have food or some sweet kicks, and you then investigate the planetarium on the roof of this store, because why the hell not. Inside, you’re immediately greeted by a robotic entity named Yumemi, the cheerful, oblivious host of the planetarium who is happily welcoming you as the 2,500,000th customer. No one has told her that the world was destroyed thirty years ago, as telling the cybernetic secretary at the space show was low on the priority list. Anyways, Yumemi wants to show you a special visualization in celebration, and you gotta fix the projector, and then more stuff happens and I really can’t spoil too much. 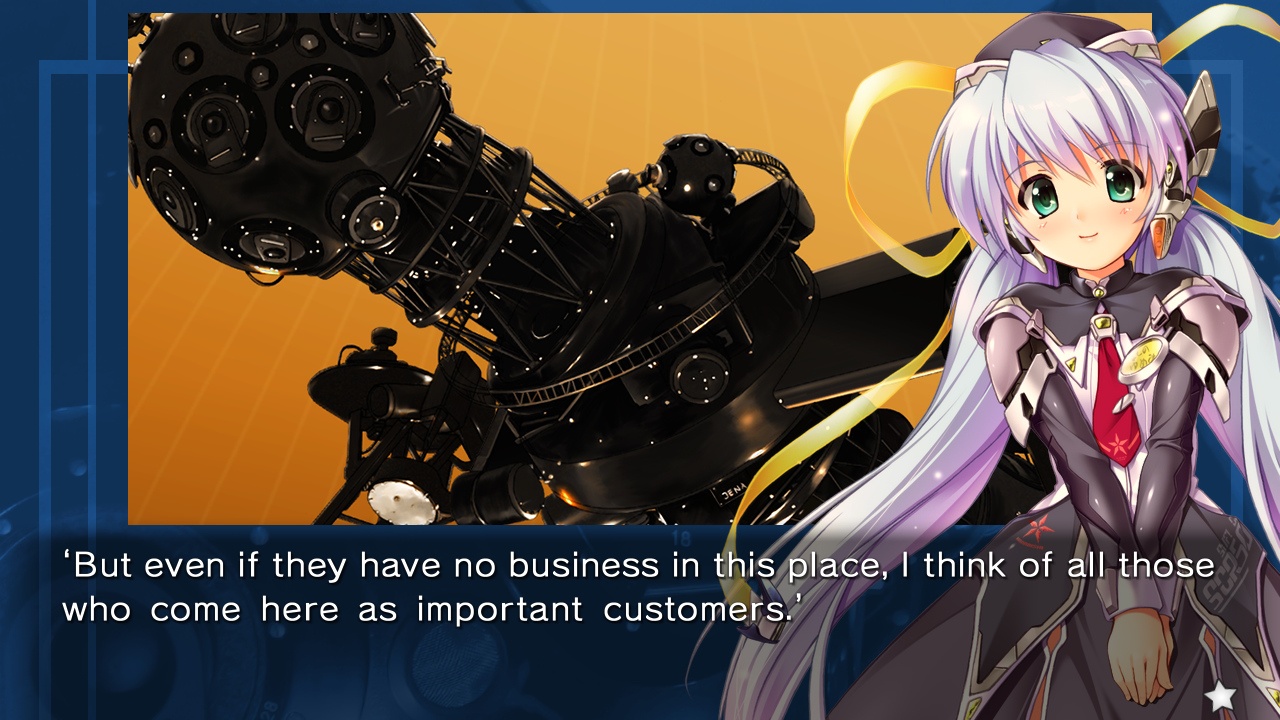 This writeup is going to be a tenuous balance, because Planetarian is short. Seriously, crazily short in comparison to many of the titles that I’ve played before. Shorter even than Killer Queen, which I think I buzzed through one awful afternoon some years ago. By the time you feel properly bonded with Yumemi your time with her is up, and, as a kinetic novel, there’s no chance to go back and try something different or do another option.  You simply need to accept that the story is what it is, and that’s the end. It’s very akin to reading an actual book, but many people are specifically playing video games to AVOID this sort of static scenario. You want choices and variance, you don’t want to simply be handed something and be told “That’s all there is.” There’s a part of it that feels depressing, and it’s not just the ending. It’s the finality of the way you must play, knowing that there won’t be another chance to do things “right.”

At the same time, that’s what does make Planetarian such a beautiful and gut-wrenching experience. The visuals are a fantastic balance of the adorable Yumemi, moments of genuine wonder and joy in the form of star fields and slivers of hope, and more desolation than you can shake a stick at. The world here really and truly has ended, and to have Yumemi either look past the rubble to explain what there should be to see or for her to flat out ignore it is fascinating. There are moments where you, yourself, forget that civilization has collapsed and that you wandered into this planetarium with a grenade launcher in hand. Though the game is far from the most detailed or expansive of titles that I’ve played recently, but it does a great job of committing to aesthetics and making sure that every scene isn’t wasted.

Additionally, the center stage of everything is the story, and the heart of Planetarian’s story is Yumemi herself. If this was a short title with a mostly unlikable protagonist, or an incredibly empty world that we simply had to deal with as a vessel to deliver an insipid romance, the whole thing would have been forgotten in the bargain bin of Steam sales. Instead, Yumemi is a cheerful, upbeat and endearing character that shows a surprising amount of complexity with her forced optimism and conscious choice to deny the world around her. She even admits, later on, that she knows you aren’t the 2,500,000th customer, but that she made this decision to honor you anyways in an effort to try and bring joy and a sliver of brightness in this destruction. Like all great sci fi characters, Yumemi fools you into thinking she’s more than a robotic entity, and you really get caught off guard with emotionally attaching to her, and, more importantly, to what she represents. By the time the story is over, you have a whole mixed bag of hope and sorrow to carry forward, not just in the conclusion of the game, but in your very real life. There’s notes that we can take away in multiple capacities, but they all ring true to the idea of the future being uncertain, even scary, but still focusing and counting on a chance to live our best lives. I really liked that, and it was only possible thanks to Yumemi. 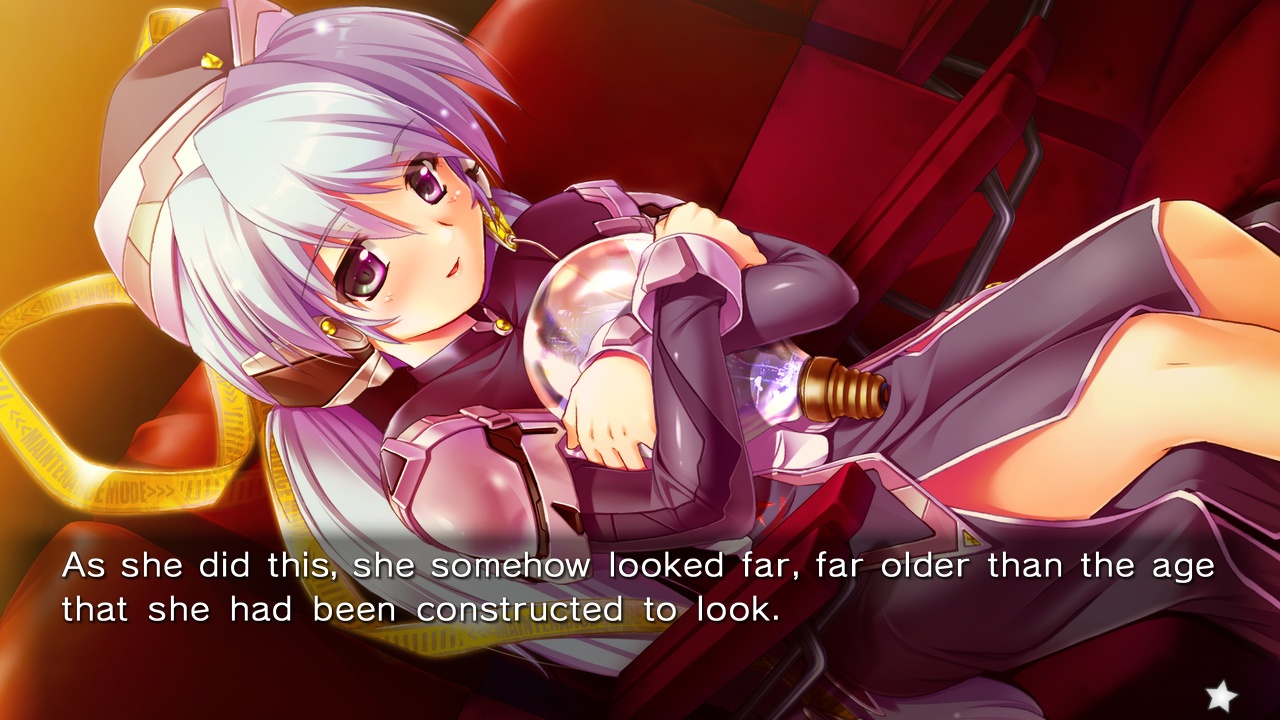 On a more technical note, this is the updated graphical version of Planetarian, which does put the Nintendo Switch release in a very special position for visual novel fans. As the Steam versions either let you have the old version with English subtitles OR the HD version with no English support whatsoever, fans have had to make a hard decision in terms of play up till this point. The Nintendo Switch version not only has the HD graphics, but also supports multiple languages, has a full CG gallery AND music player (which is highly recommended for when you need a great, melancholy soundtrack) and allows for both button and touch screen controls. There has been a fantastic amount of work put into this, as it combines the solid English localization script with the better graphics, has been made to perform flawlessly on the Switch (it is a visual novel, after all), and the price hasn’t changed. There’s no Switch tax here, it remains the same $9.99 as other storefronts. Meaning that people who’ve had this on their wishlists for years can jump and not sacrifice anything.

Kinetic visual novels are a tough sell, but not if you view it through the lens of a great physical novel. I would re-read the same books over and over, knowing full well that nothing could be changed. In Planetarian, I have that same advantage with the added perks of music, visuals and a more robust bookmarking system than filling my book with index cards. VN fans will have already pulled the trigger, but there might be a bit of hesitation for newcomers. To you, I ask you to consider if you’d watch a four-hour movie if you knew it would make you cry. If you’d read an 800 page book if you were certain it would pluck at your heartstrings. There’s no dating, there’s no bizarre side characters or complicated dance routine or anything like that. There’s a story, and it’s sad and it’s sweet and you’ll know it complete before Billy Joel shuts me down. If you’ve got a long afternoon, a rainy day and a heart that needs come cathartic release, then come and see the beautiful stars. There’s nothing quite like it.

The acclaimed visual novel finally gets a proper home on the Nintendo Switch, with the updated graphics, English support and fully story intact.