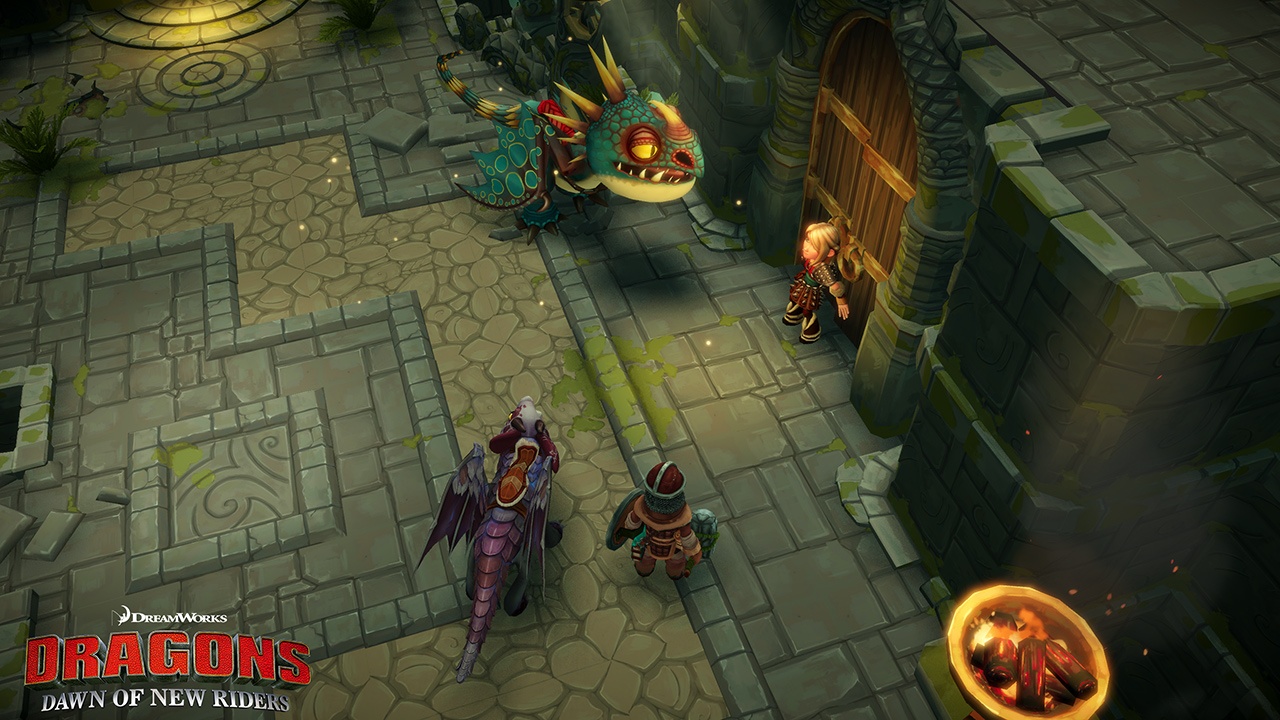 It may, or may not, have passed your notice, but Dreamworks have a new movie coming out that continues along the themes of its How to train your dragon series. There’s also a new video game being released too, for the Nintendo Switch; one that ties in with the film’s release, but although it’s a movie tie-in, this isn’t a game that follows along the same path as the new movie. Instead, us lucky gamers are treated to Dragons: Dawn of New Riders, which is set somewhere between the last film and the new movie.

Developed by Climax Studios and published through Outright Games, this new flame-grilled release follows the exploits of a young man called Scribbles. Found within the burning ruins of the forest by Hiccup and Toothless, our new hero is suffering from a memory loss and in possession of a peculiar dragon egg. Not before long, you find yourself imprisoned by a band of Dragon Catchers, but thanks to the timely hatching of your egg, a new hybrid-style of Dragon, Patches, frees you from your enslavement. Together, the two of you embark on a journey to foil the plans of the Dragon Catchers, as well as learn about the mystery surrounding your lost memories and your new scaly sidekick.

The first thing that needs to be pointed out, is that this is a game that is directly aimed at the five to twelve-year-old age groups. In order to make it as accessible as possible to a younger audience, the game focuses on a simplicity to all of its mechanics, at least in terms of presentation, aesthetics and controls; although some of the puzzles and enemy encounters can provide a nice balanced challenge, at least for the age group it is targeted at. The game plays primarily as a top-down, dungeon-crawling style of adventure. Its story is told through a series of brief narratives in a bright, cartoon style that matches the main bulk of the game’s design. Everything here is suitably family-friendly and inviting to play. 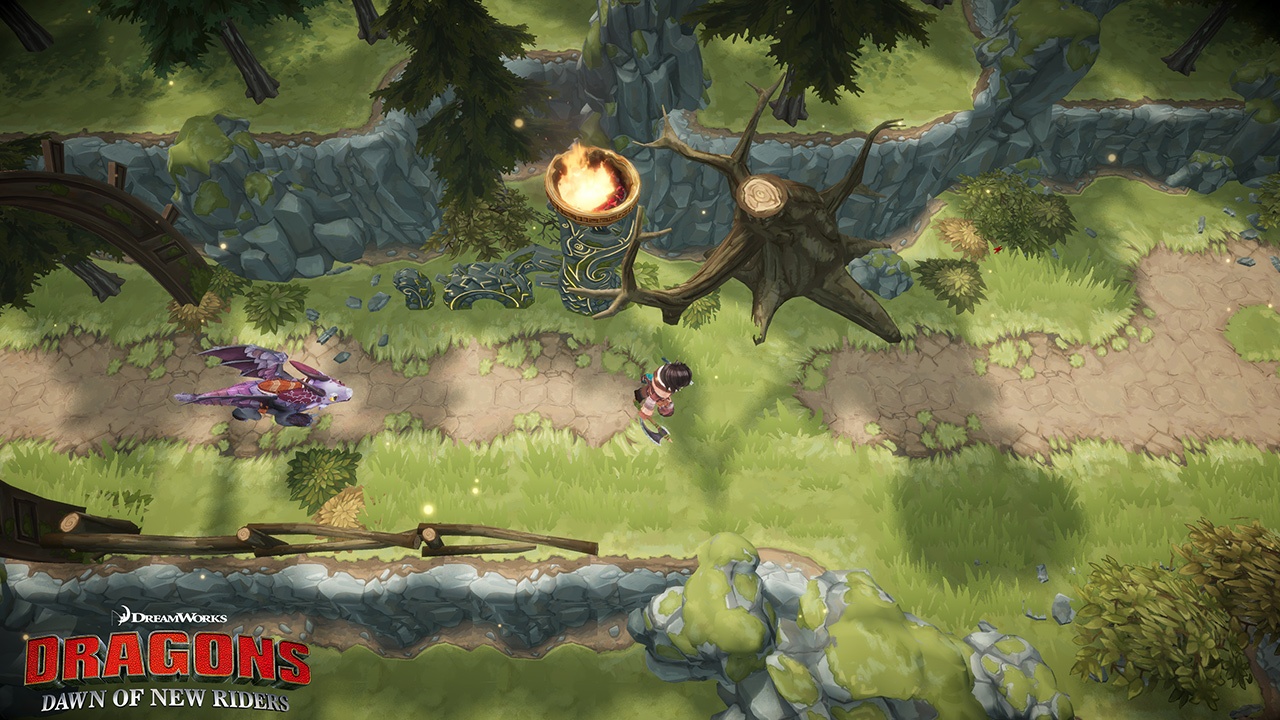 The main bulk of the game involves searching around a series of locales that offer a distinct variation in their styles. In order to progress through the story, you need to fulfil a series of tasks that involves exploring the locations, battling against the bad guys and solving a series of puzzles. There’s a focus here on interacting between Scribbles and Patches to work your way through each of the levels; using Scribbles for basic melee encounters and Patches for his abilities to transform the environments in order to access new or impassable areas. You can switch between characters with ease and any combat scenarios contain a simple control scheme that involves blocking, dodging and attacking.

As you progress through the game’s six hour or so storyline, you both develop new weapon skills or dragon abilities from sword to hammers and icy breath to electricity discharges. Each of these have a bearing on the landscapes; as well as towards solving many of the puzzles that are located throughout the game. There’s nothing here too difficult, but do contain a nice balance that may require younger players to think things through; with the answer or technique never being frustratingly difficult to solve. In terms as playing as an adventure, there’s a straight-forward path here that encourages the player to proceed forward. There’s no upgrade mechanic or menus to trawl through; just a simple, straight-forward story that creates an enjoyable journey in the world of the Dreamworks’ Dragons.

Although the majority of the game is presented as a top-down crawler, the game also incorporates some flying mechanics too, as you swoop amongst the clouds on the back of Patches and explore the islands around you. Although these sections offer a variety in the gameplay of the title, they simply don’t offer anything else apart from a means to get from one location to the other. It’s a shame really, as these sections are nicely done, producing a simplistic scheme that makes soaring amongst the islands a pleasant premise. A few side-quests or objectives would have been nice here, but saying that, they do break up any monotony of just simply dungeon-crawling your way throughout the whole game. 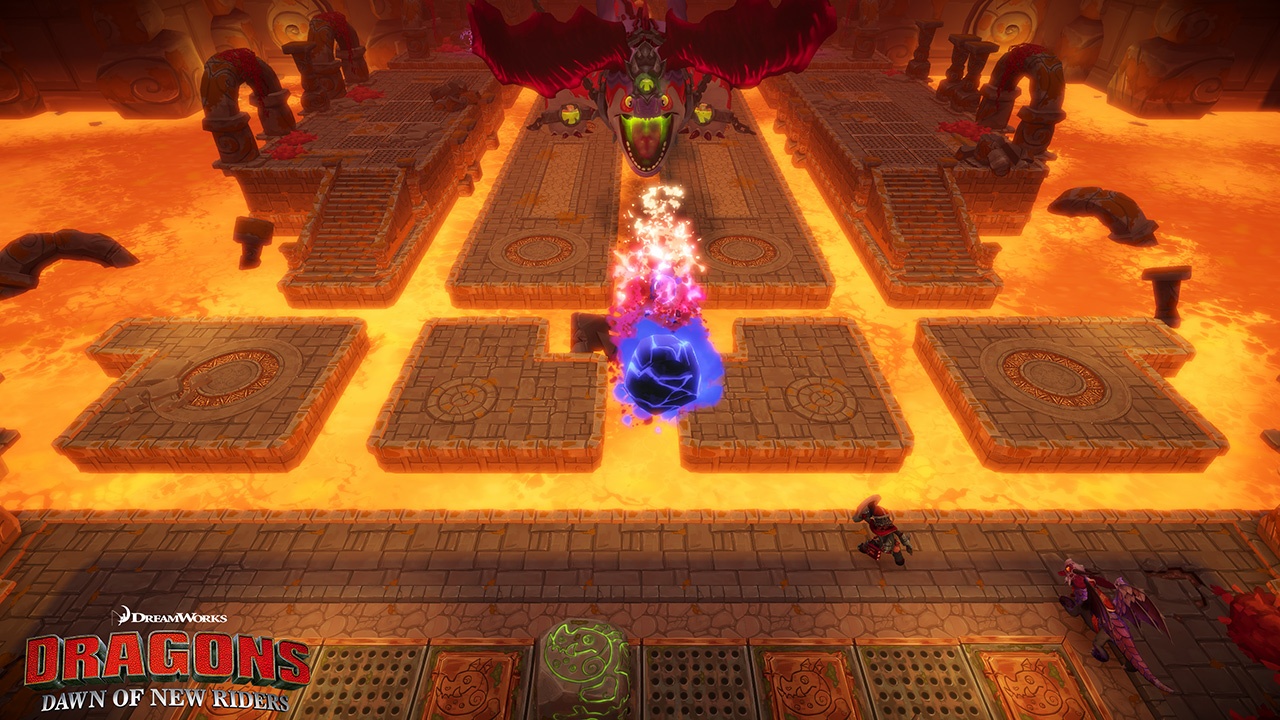 Despite its friendly control schemes, interesting locales and inviting gameplay, the game does possess a few annoyances. In terms of combat, your health is presented by a series of hearts; take damage and you lose some of them. A generous helping of potions does allow you to replenish your health with ease, but when in control of one character, your sidekick is controlled by the AI. This is all well and done, but whenever you are engaged in combat, your AI controlled buddy can take damage; forcing you to constantly regenerate hearts and keep an eye on your partner, which when tasked with a specific objective, can become a bit of a distraction. Saying that though, it’s never a frustrating experience. Some of the aiming mechanics can feel a bit iffy at times too, but again, never feel out of control or too difficult to overcome.

Apart from these minor issues though, there’s nothing technically wrong with the game. Everything performs admirably, whether you play docked or in the Switch’s handheld modes, and the game looks deliciously gorgeous with bright visuals and an art-style that matches the animated movies. Although not primarily based on the movie it is tied-in with, you do get to come across some old favourites that have starred in the previous movies, as well as the new one, and it does contain that distinct Dragons feel. All of its elements combined do produce a very family-friendly tile that is both extremely playable and a joy to look at.

Overall, Dragons: Dawn of New Riders accomplishes everything that it has set out to do. It’s ease of play, gorgeous visuals and interesting scenarios provides more than enough entertainment for younger audiences and just about holds enough for older players too. Apart from a couple of minor annoyances, the game plays beautifully and as a movie tie-in, creates a nice escape into the world of Dreamworks’ creation. In terms of its scoring, I’m simply marking this title on what is was designed for, and that’s in producing a game that is highly playable for its target audience. It doesn’t do anything new or unique, but what it does do, it does well and as a form of entertainment for young gamers, it rates highly on the dragon scale.

A family-friendly movie tie-in that offers a fiery, breath of fresh air and a playability that rates highly on the dragon’s scale.